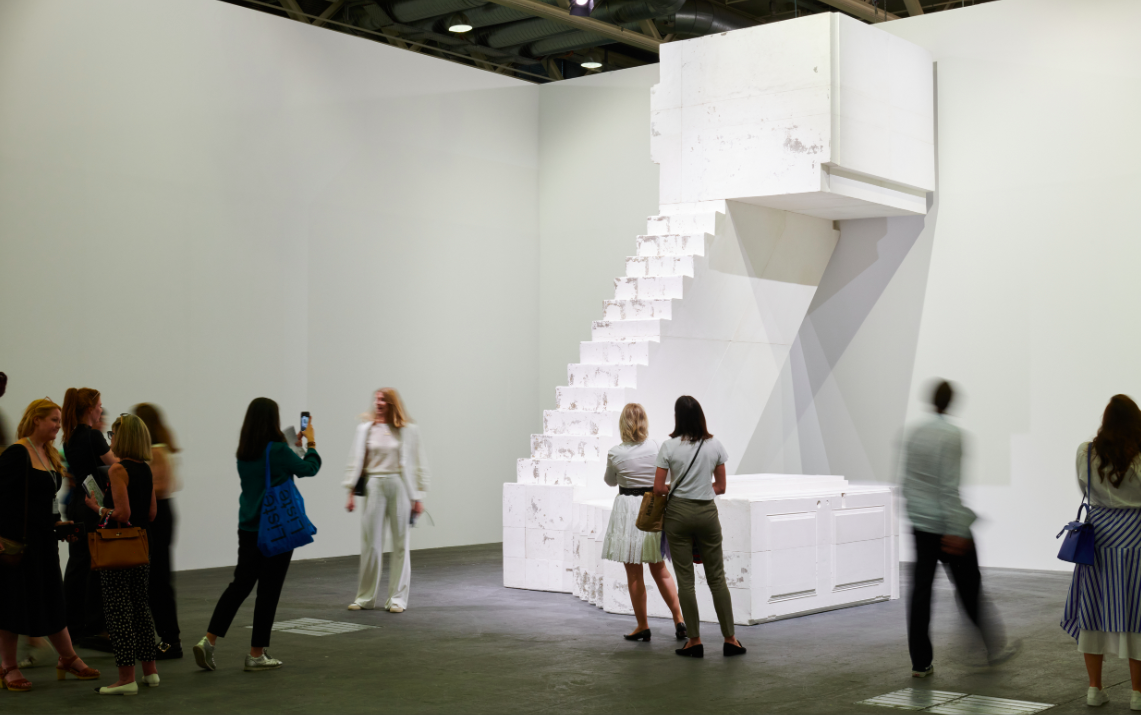 The opening of the biggest commercial art event of year is, as always, a thrilling combination of wealth, visionary creation and acquisitiveness. Nowhere is that more in evidence than on Tuesday morning, when the security turnstiles finally open and eager collectors stream in to get the hands on the latest hyped young artist (still just that little underpriced).

On the ground floor, where the largest and most established blue chip galleries hold sway, Swiss mega-gallery, Hauser und Wirth stole the show with one of Louise Bourgeois’ giant spider sculptures. What makes these works so compelling is their striking ambiguity. Is it oppressively overbearing or gallantly protective? There’s no way of knowing as its thin, revolting legs straddle the central booth. The piece sold for $40 million in the first hours of the fair opening.

The usual big name galleries are present including Frith Street who are showing a popular Cornelia Parker work from 2006, Thirty Pieces of Silver, that hangs suspended on nylon string from the ceiling. The forks and other items trembling from the movement of collectors in the exclusive VIP lounge on the floor above. 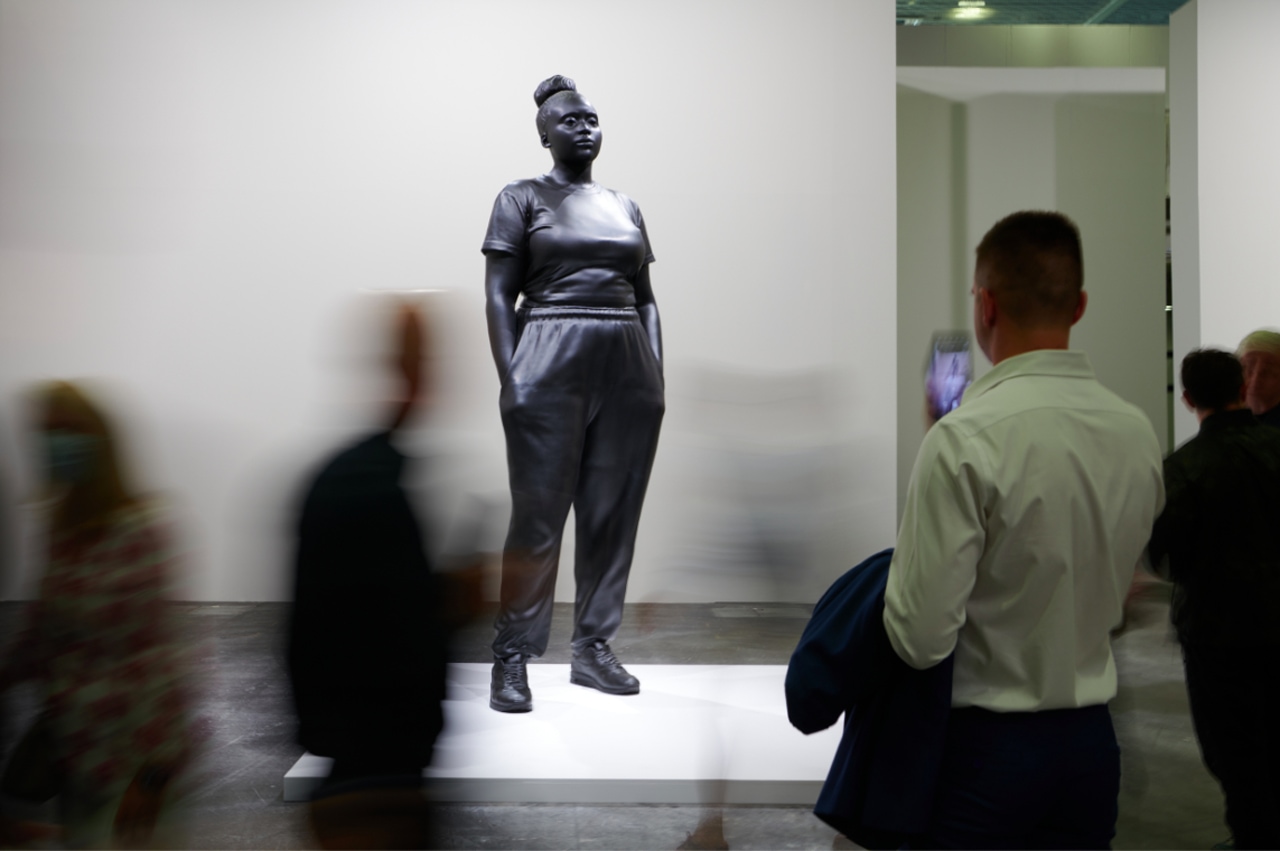 A stunning new work by Tacita Dean made to commemorating the 40 year anniversary of the founding of Niels Borch Jensen entitled Expulsion from Paradise, 2021, shows the silhouetted figures in despair, drawn from an early renaissance fresco by Masaccio. Not too far away, Gemini G.E.L. had a glorious Roy Lichtenstein colour woodcut titled Morton A.Mort from 1980 as well as a number from Richard Serra’s Junction series.

This year’s fair has followed the trend in the international art world to try and rebalance representation and to reflect the changing world by giving more opportunities to galleries outside the global north. And to encompass a broader range of voices within the Europe and North America dominated fair, 19 completely new galleries have been added with many hailing from African countries like Senegal and Angola.

This long overdue shift in representation is perhaps most ably reflected in the artists in Art Unlimited – the thrilling, large-scale project driven exhibition which distinguishes Art Basel from all other fairs. Gerhard Richter’s room of early sketch ideas were an outlier with most positions occupied by less established artists with emphasis on those that have been overlooked or neglected through much of their careers. 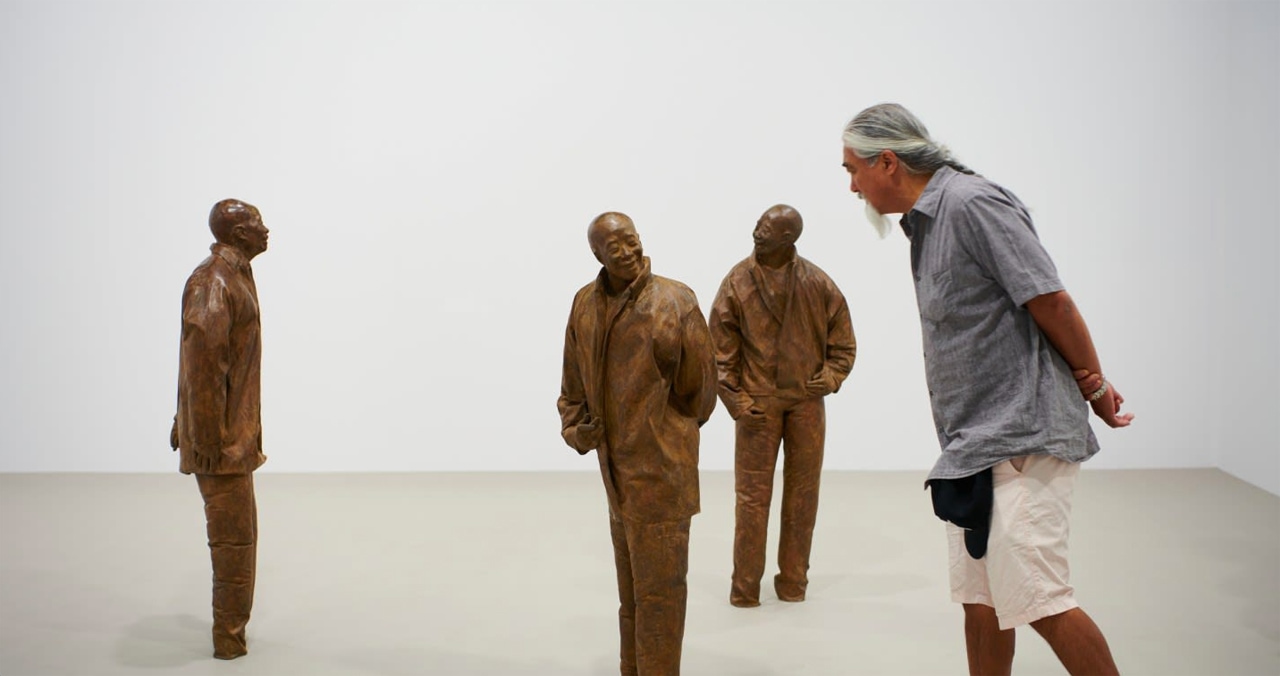 Not that that can be said about Rachel Whiteread, whose Untitled, a white spatial installation, a cast of the interior space that makes up the narrow doorway in her home, is a ghostly, abstract artwork and is one of the stand out pieces in the presentation.

Nearby is the highly photographic sculpture Number 341, 2022 by the New York based artist Leonardo Drew. His assemblage installation extends out of the wall onto the floor plane, a monumental piece of seemingly burnt, weathered wood. Across the hall, Thomas J Price has unveiled a specially made 3-metre sculpture titled Moments Contained, pursuing his aim of making us rethink the very idea of a monument by showcasing the underprepresented.

The fair has been overshadowed by Russia’s horrific invasion of Ukraine. And questions to fair director Marc Spiegler, centered around the actions of the admissions committee as they dealt with Russian galleries and collectors. According to Spiegler, “it has been a long time since we’ve had Russian galleries here (Art Basel) but do we have artists that support the regime? The answer is no.” said Spiegler, who handled the questions well. 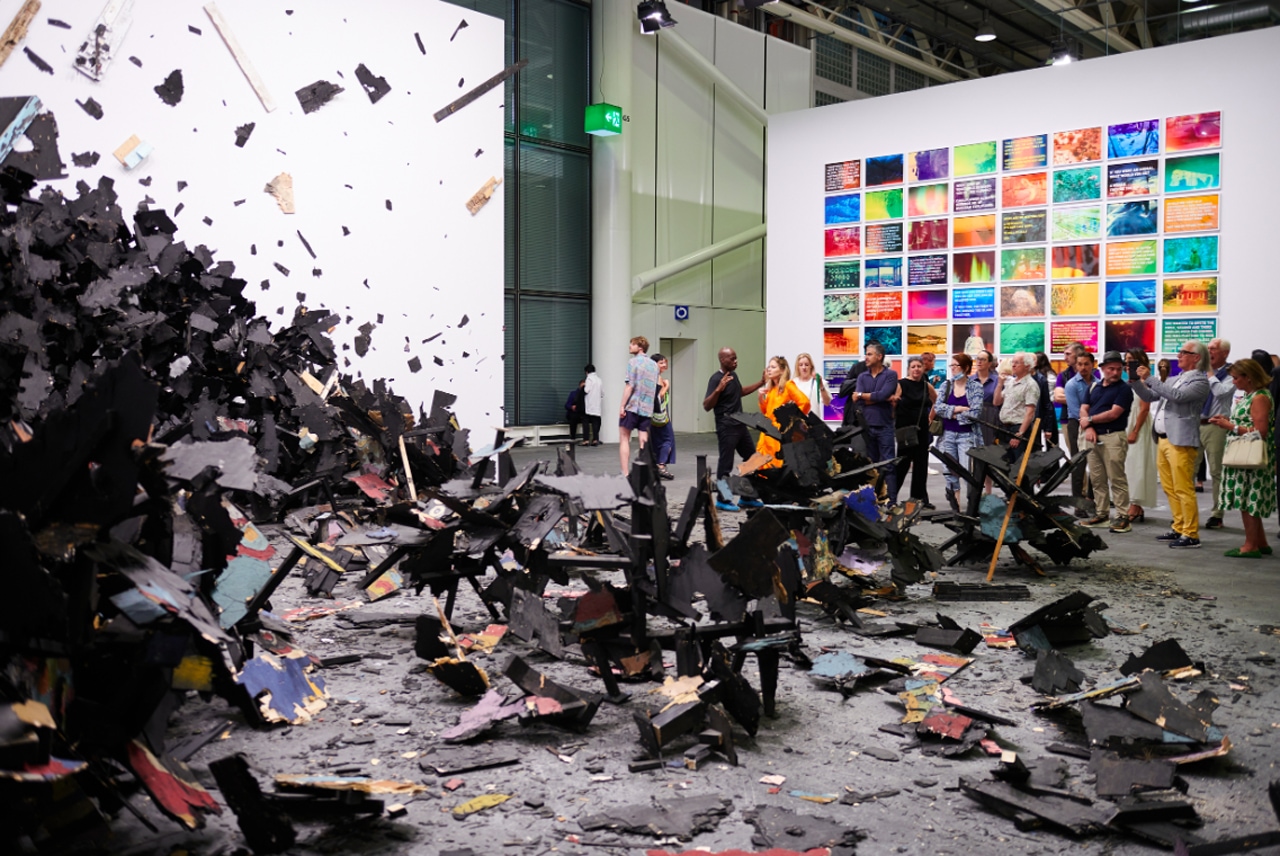 Some institutions have made the decision to exclude Russian artists completely, something Art Basel would never do: “the last thing we would have done is to cut off their involvement because of their passport… this war has been a disaster for the Russian culture scene.” Said Spiegler.

The fair is coinciding this year with the first ever 1703 contemporary art fair in St Petersburg – named after the date of the founding of the Russian imperial capital. The art fair is sponsored by Gazprom, the Kremlin-controlled energy giant. Some artists are already beginning to withdraw their work, like the Russian video art collective AES+F who were to be shown at the fair against their will and specifically asked for their work to be taken down. With its insular and triumphant agenda – Boris Piotrovsky, St Petersburg’s vice governor in charge of culture and tourism, said the fair “confirms our status as a modern cultural capital” – the brash commercialism of Art Basel feels like a welcome breath of fresh air.