Sean Scully’s Paintings and Sculptures in His Own Words

Irish-born, America-based artist Sean Scully is renowned for his rhythmic and poetically abstract paintings and sculptures. Often inspired by landscapes, his visual language is minimal yet profoundly human, and draws upon his fascination with the ever-changing horizon. Scully frequently centers his compositions around horizontal lines and is instantly recognizable for the striped, checker-board like motif that reoccurs throughout his oeuvre. He is the subject of over 15 solo international exhibitions this year alone and throughout his 40-year career the outspoken artist and collector has had a lot to say about his art and life.

Sean Scully was born in Dublin in 1945, but spent his childhood in London where his family lived in extreme poverty. He frequently details the incredibly difficult and stressful relationship he had with his warring parents, citing it as the cause of his bed-wetting condition (which continued until his early 20s.) While Scully’s sense of light and space has undoubtedly been influenced by the two landscapes of his childhood, he argues that as a result of his tumultuous upbringing, he has little connection to a sense of place. He remains restless and always forces himself into situations where he’s a little off-balance. A self-described nomad, Scully pushes geographical boundaries and frequently travels between New York, Munich, London, Beijing, Barcelona and Ireland, believing such rootlessness is a central element in his creative process.

“I have spent my life making the melancholic into something irresistible. Because the world has changed around me and become more regretful, my paintings have become more true.”

Often produced in a hypnotic state, Sean Scully’s paintings and sculptures are deeply emotional. Over recent years, he has turned away from his earlier hard-edged minimalism to an increasingly expressive style which is intended to reflect the unpredictable beauty of the natural world. His Landline series, which he exhibited at the 2015 Venice Biennale, is most demonstrative of this progression. These horizontally layered paintings are mythically romantic in their pursuit of far-off horizons—an apt reflection of Scully’s personality and Irish roots.

“I want my paintings to be obvious, so that when you see them you feel that I have painted something you were thinking yourself, as if I have stolen the thought from you.”

Sean Scully is an avid collector of art and claims that “to understand a work is to own it”. His first purchase, back in the 1970s, was a Sol LeWitt print which now sits alongside works by Damien Hirst and photographs by Walker Evans on the walls of his studio in Tappan, New York. As well as “feeding off” and being inspired by these modern artists, Scully has been profoundly impacted by works such as J.M.W. Turner’s “The Evening Star.” Combining the character of American Abstraction with European artistic traditions, Sean Scully’s work is the product of a multitude of movements and his own layered personal history. It is because of this that he manages to evoke such a familiarity through his romantic landscape paintings and geometric sculptures.

“I never feel guilty when I’m making a painting. I feel immensely sad, there’s a lot of stuff, a lot of political stuff roaming around in my head; a lot of anger that I have about the way the world is.”

Scully is famously contemptuous of “the system” and claims to use his art to “pushback against the exploitation in the world.” Blunt and often controversial, the abstract artist is certainly not one for keeping his opinion to himself. Over the last few years, as his popularity soared in China thanks to several ground-breaking exhibitions, Scully expressed his feelings about the Chinese government and their alleged treatment of his most famous student, Ai Weiwei. While reports of censoring were central to Weiwei’s narrative, Scully was keen to assert the creative freedom that the country had allowed him. Scully even suggested that Weiwei was manipulating and fabricating the authorities’ treatment of him in order to stimulate his market in the west. He has since attempted to retract some of his earlier comments and claims he has maintained a close friendship with Weiwei. Distancing himself stylistically as well ideologically from Weiwei’s work, Scully argues that while Weiwei deals with the symptoms of our political and social reality, Scully focuses on the cause with abstraction—allowing him to investigate “inner structures”.

“I’m not one of these people who is privileged with doubt. I look at my paintings sometimes and I think they’re wonderful. I love them.”

Sean Scully: Landline is on display at Hirshhorn Museum and Sculpture Garden in Washington, D.C. from September 13, 2018 until February 3, 2019.

Sean Scully—Uninsideout is on display at Blain|Southern, London from October 3 until November 17, 2018. 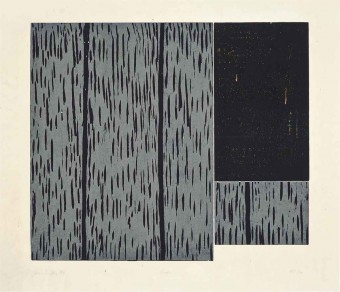