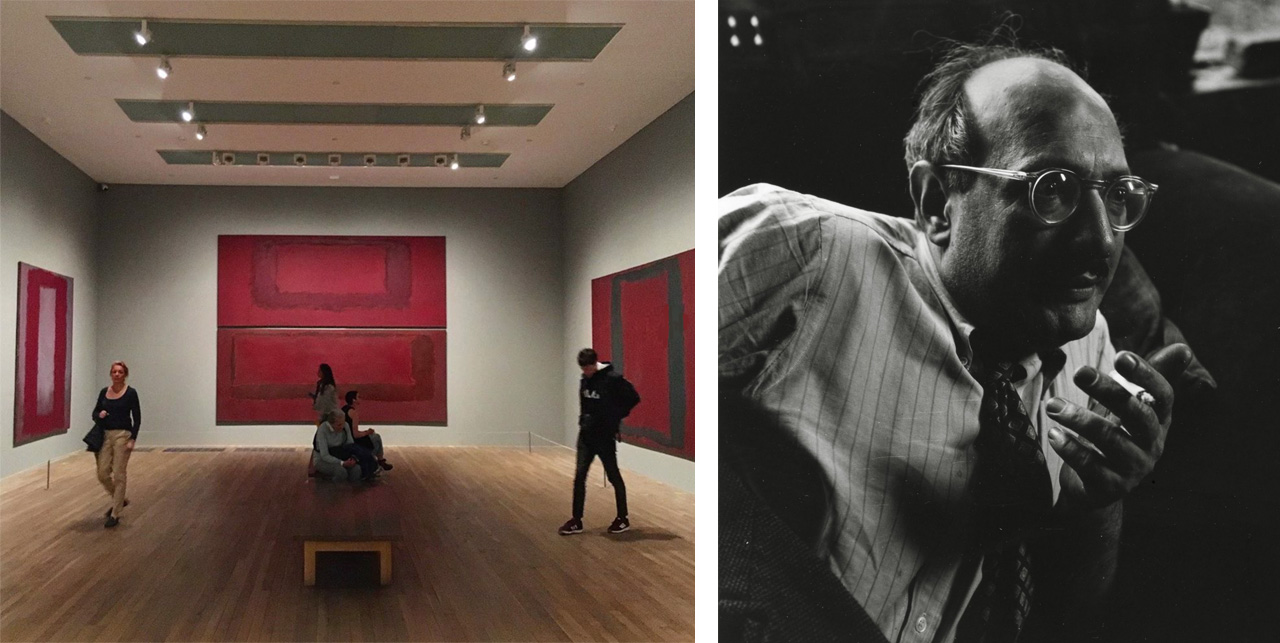 To hang on the walls of The Four Seasons, New York’s swankiest new restaurant, the owners commissioned Mark Rothko to paint murals measuring over 600-square-foot. In 1958 it was by far the most prestigious commission ever awarded to an abstract artist, costing $35,000 ($327,000 in today’s money). But the so-called Seagram Murals – named after the Seagram Building they would be housed in – would be Rothko’s first and first ever cancelled commission.

No one knows why Rothko, the Latvian born immigrant, accepted a commission from such a lavish restaurant. He was an artist renowned for his political liberalism and frugality, once even proclaiming that it was “criminal to spend more than $5 on a meal.” Nevertheless, Rothko set to work constructing a scaffold in his studio to match the exact dimensions of the restaurant.

The murals were darker in mood then his previous work. The bright and vivid colours of his earlier paintings shifting to a darker maroon, blood red and black. He envisage the murals as exacting a kind of brutal aesthetic revenge, so that on being confronted by his dismal scenes around them, the diners would choke on their food, spluttering into their Richebourg Grand Cru. It never did work out that way. 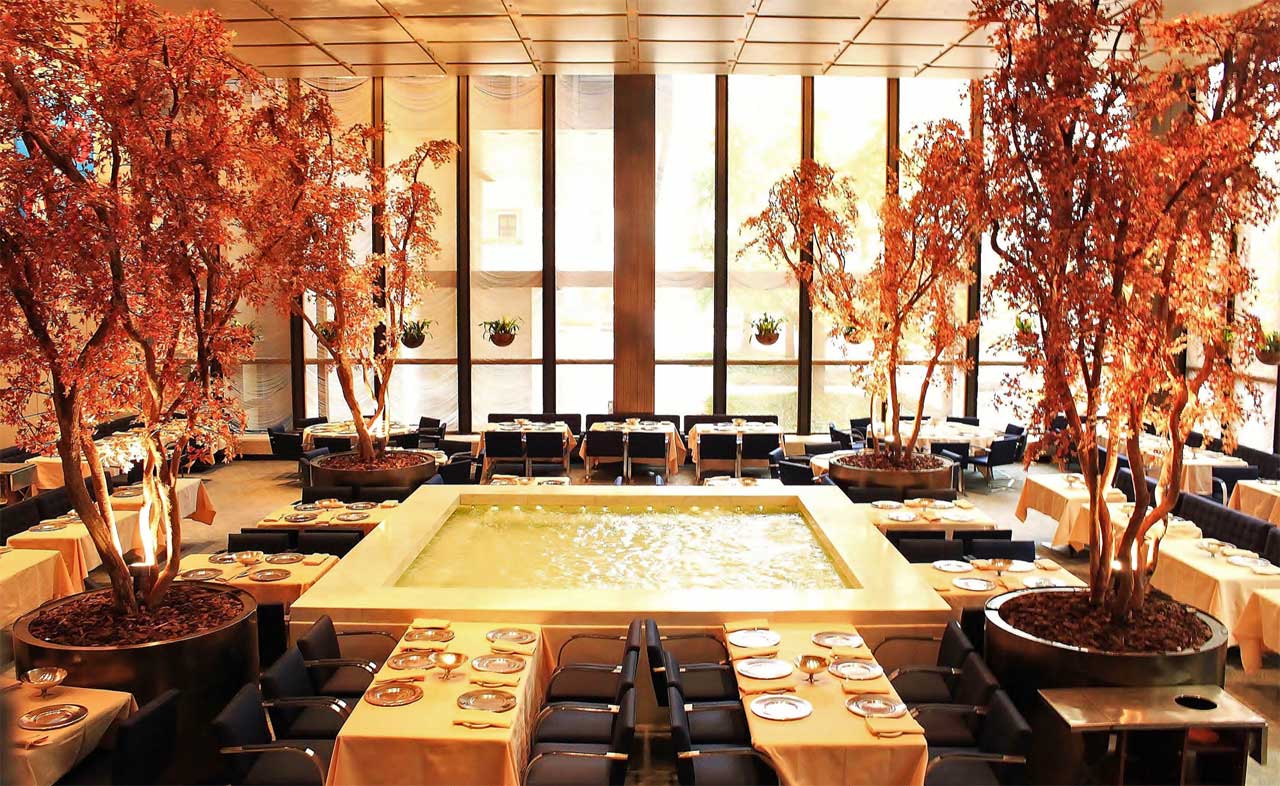 Just before completing the commission, Rothko booked a table at the restaurant with his then wife, Mell. Jackson Pollock’s masterpiece, Blue Poles – a stand in until Rothko’s commission was delivered – hung over them in the Pool Room while they ate. We will never know what happened during his dinner or what he spoke about with his wife, but we do know that Rothko thoroughly hated the experience. Arriving home that same night he phoned a friend to say he was sending back the money and withdrawing the paintings. “Anybody who will eat that kind of food for those kind of prices will never look at a painting of mine”, he later told his studio assistant.

Instead, and after long and protracted negotiations, the works were despatched to institutions around the world including the nine that went to the England. Today, in London’s Tate Modern, in one of the first rooms you pass through, these abstract scenes of solemn horror are on permanent display to millions of visitors each year.

The same could not be said of The Four Seasons. After limping on for yet another year after yet another costly and ill-advised reopening, New York’s most historic restaurant is finally shutting its doors. In its heyday it was seen by many as the most daring and contemporary restaurant in New York. Existing, for over 60 years, as the de facto canteen for the Manhattan elites.

According to Michael Korda, the former editor in chief of Simon & Schuster, “Powerful people eat in order to be seen with other powerful people.” Such a remark gets to the heart of the success of The Four Seasons; a restaurant that expressed, through its menu and lavish decor, New York as the beacon of the western world, a place where ambition, money, talent, and beauty came together. It was here, in the decadent boom of the 1980s, that the power lunch was invented (a notion that would have surely appalled Rothko).

But the restaurant’s real zenith came in the 1970s. Whilst the city faulted and came close to bankruptcy, the tycoons and socialites blithely celebrated their own wealth and power. With an interior designed by Philip Johnson, the modernist architect and darling of MoMA, it was the most expensive restaurant ever built, costing more than the Guggenheim Museum being constructed at the same time a few blocks away.

Located at the base of the Seagram Building, Ludwig Mies van Der Rohe’s black skyscraper on East 49th Street, The Four Seasons was a modernist masterpiece. Providing unquestionable proof that “modernism could, in fact, deal in emotion.” With chairs designed by van Der Rohe himself and an Eero Saarinen designed powder room with tulip chairs, it was a landmark interior filled with unique furniture. 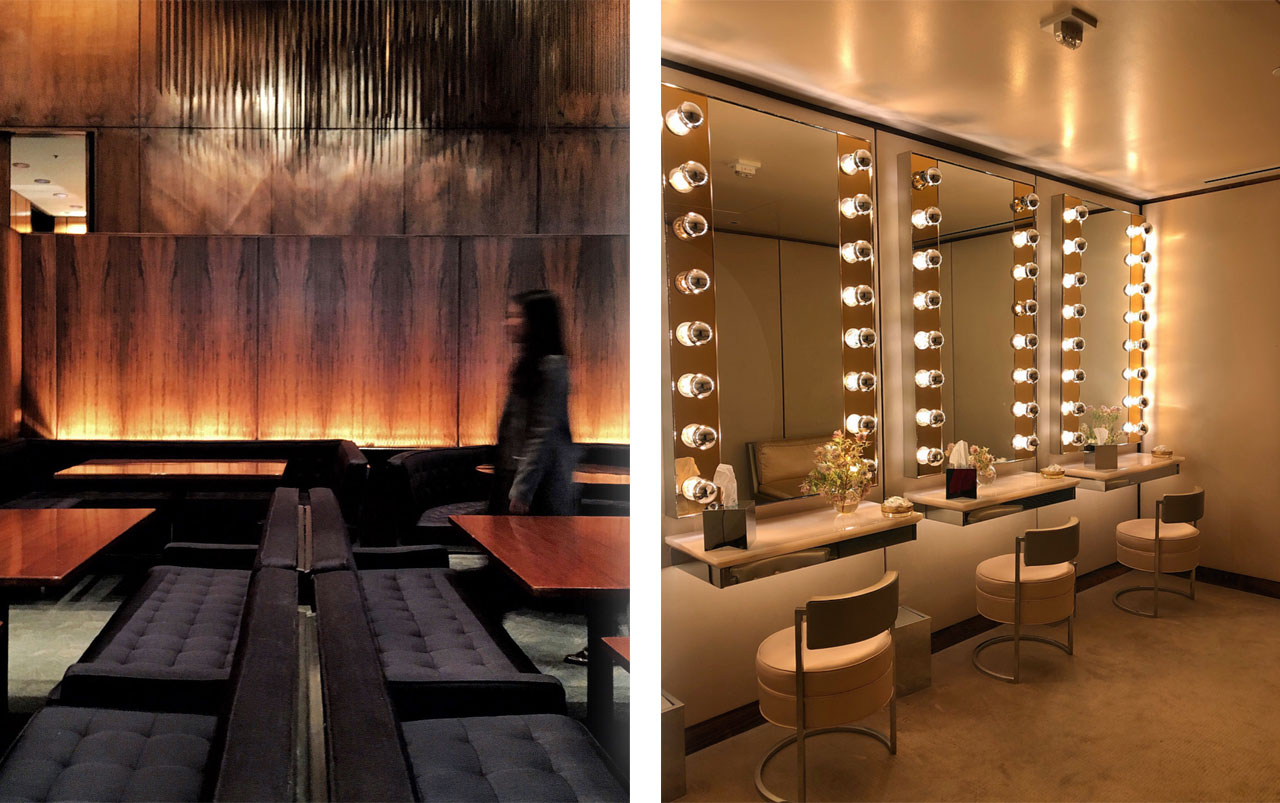 The restaurant was so established so firmly intwined into the fabric of New York, that its demise was especially hard to accept. It began in 2000, when the Seagram Building was bought by the property mogul Aby Rosen who never much cared for the restaurant’s legacy. After grappling with the city’s landmark commission he won the right to remove its famous and infinitely fragile Pablo Picasso tapestry that had hung for decades between the Grill and Pool Room. He replaced it with two Alexander Calder mobiles. Later, when the restaurant’s lease came up for renewal, Rosen raised the rent fivefold. Giving the restauranteurs no choice but to move on. In 2016 the furniture was auctioned off. Even the ashtrays sold for $12,000 each.

By 2018, The Four Seasons had moved to a new location but by then it was attracting a very different visitor. Once the high point of 20th-century art, style and design, the new restaurant location was unable to recapture its former glories. It would never be the gesamtkunstwerk it once was. Its final closure was announced last week alongside a message thanking everyone for their past “support and patronage.”

There are plans afoot for The Metropolitan Museum – a major buyer at the 2016 auction – to reconstruct a period room in the style of The Four Seasons. Giving visitors the chance to view, if not experience, the uniquely harmonious modernist ensemble once again. In such a setting perhaps Rothko would have approved the hanging of his Seagram Murals, and bring a tantalising unity to what would have been one of the most unlikely combinations in art history.