Mouth-watering treats and delectable desserts fill the cabinets and displays of American artist Wayne Thiebaud’s iconic still lifes. In creamy textures and pastel paints, he depicts the deliciousness of the everyday and has created a visual language based around depictions of common objects. Arrested on his canvases are the promises of cakes slices, ice cream cones and jelly apples, all of which evoke a child-like sense of wonder and sensual immersion for his, presumably, salivating spectators. 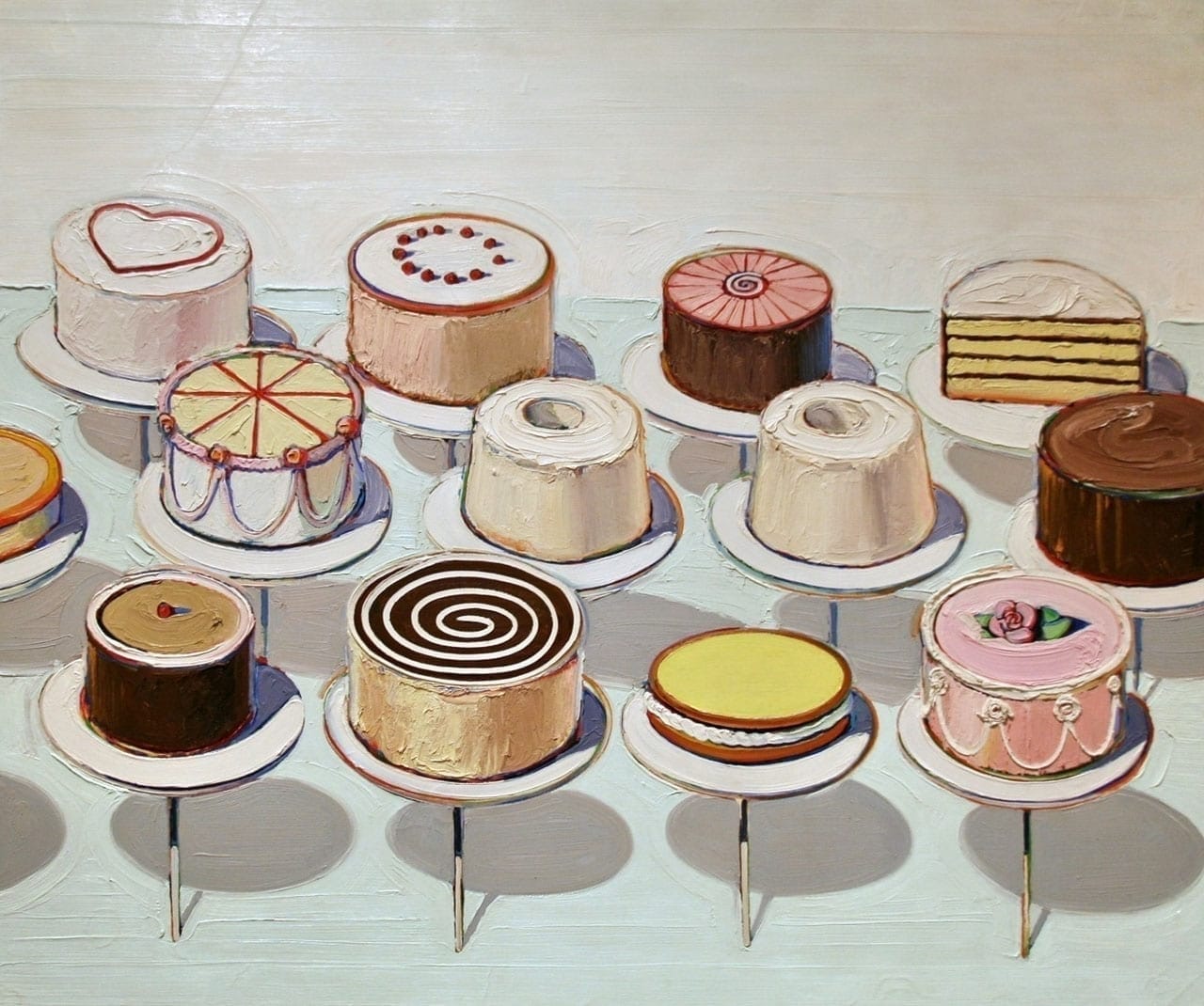 Throughout his 50-year career, Thiebaud has been canonized for his delightful cake arrangements and nostalgic commonplace objects, as well as his similarly textured portraits and landscapes. While he has undoubtedly achieved a huge amount of success—in 2015, Artnet ranked Thiebaud as the sixth highest-grossing living artist—he has remained humble and consistently self-deprecating. In the face of a constantly shifting contemporary art world and in contrast to the flashy, gimmicky work of his younger colleagues, Thiebaud has not wavered in his authenticity or purity. Simple and delicate, his portraits, landscapes and still lifes, are dedicated to explorations of pleasure and the tactility of taste. Thiebaud is the product of the culture and objects that have surrounded him, and his paintings express a distinctively American sensibility in both their style and subject matter.

Growing up in California, Thiebaud spent a summer as an apprentice cartoonist at Walt Disney studios before working as an Army artist during World War II. He originally set out to be a commercial artist and has always held a huge appreciation for those in this field, citing his heroes to be graphic designers, illustrators, cartoonists, and sign painters. It is this deep respect for these professions that has fuelled Thiebaud’s rejection of the Pop Art movement with which he has been linked since 1962—when a slice of his pie was included in Walter Hopps’ exhibition Pop Art, New Painting of Common Objects at the Pasadena Art Museum. 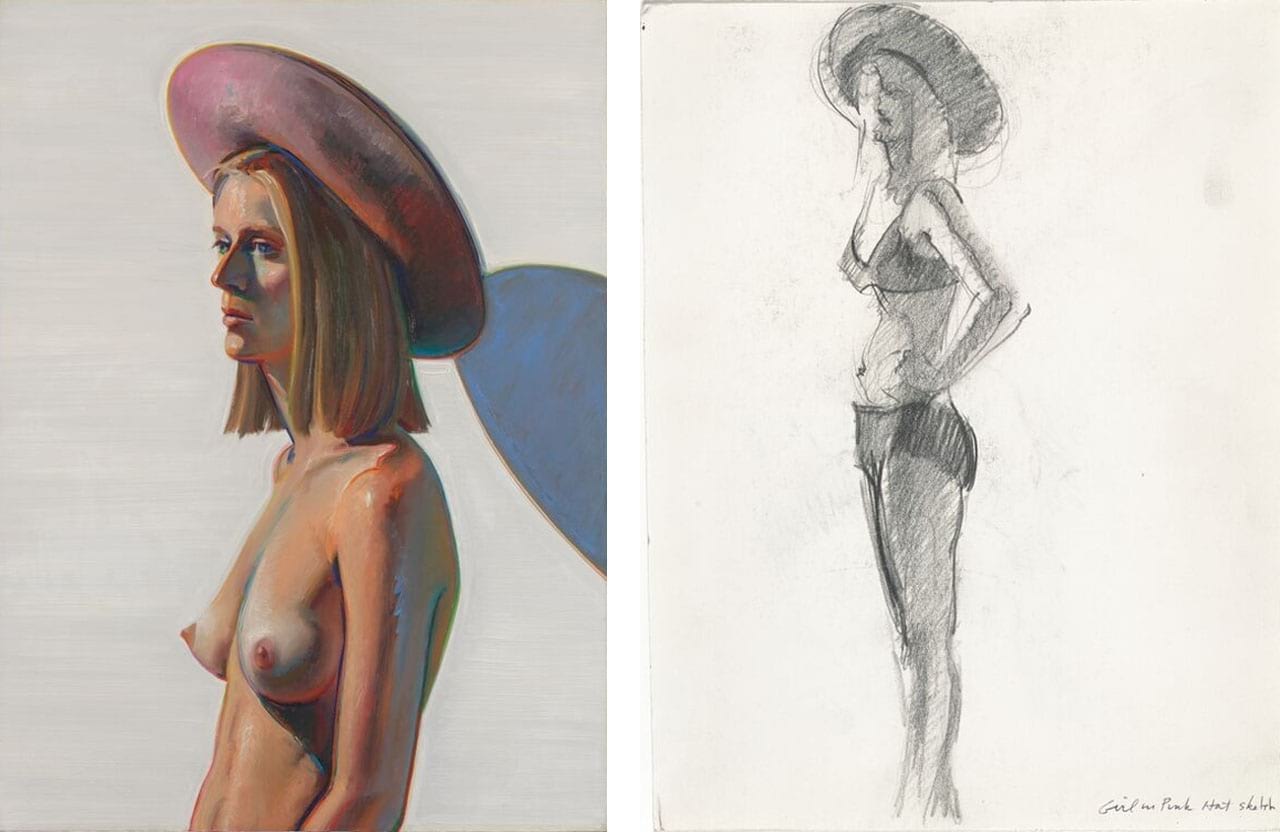 Despite his fascination with objects of mass consumption, Thiebaud has no interest in recycling pre-existing imagery. “It’s too much to do with appropriation, and it’s also a kind of insult to some of those great graphic designers they took from, and cartoonists,” he has said when discussing Pop Art. Thiebaud distances himself from the mechanical style of the movement, privileging notions of the handmade. An absence of technology also pervades his preferred technique in which he shuns photography and external stimuli, instead choosing to work from memory.

In the 1950s Thiebaud began his teaching career which eventually led him to become a lecturer at the University of California, Davis. He officially retired from this role in 1990 at age 70, but continued to teach his legendary class sporadically until last year. It was while on a sabbatical from his first teaching job in 1956 that he travelled to New York and befriended Abstract Expressionists artists such as Willem de Kooning and Franz Kline, as well as Jasper Johns and Robert Rauschenberg, who were rebelling against “Ab Ex”. Thiebaud was so inspired after meeting these artists that one day, during his time in New York, he sat down in a restaurant and made his first drawing of a pie in a display case. 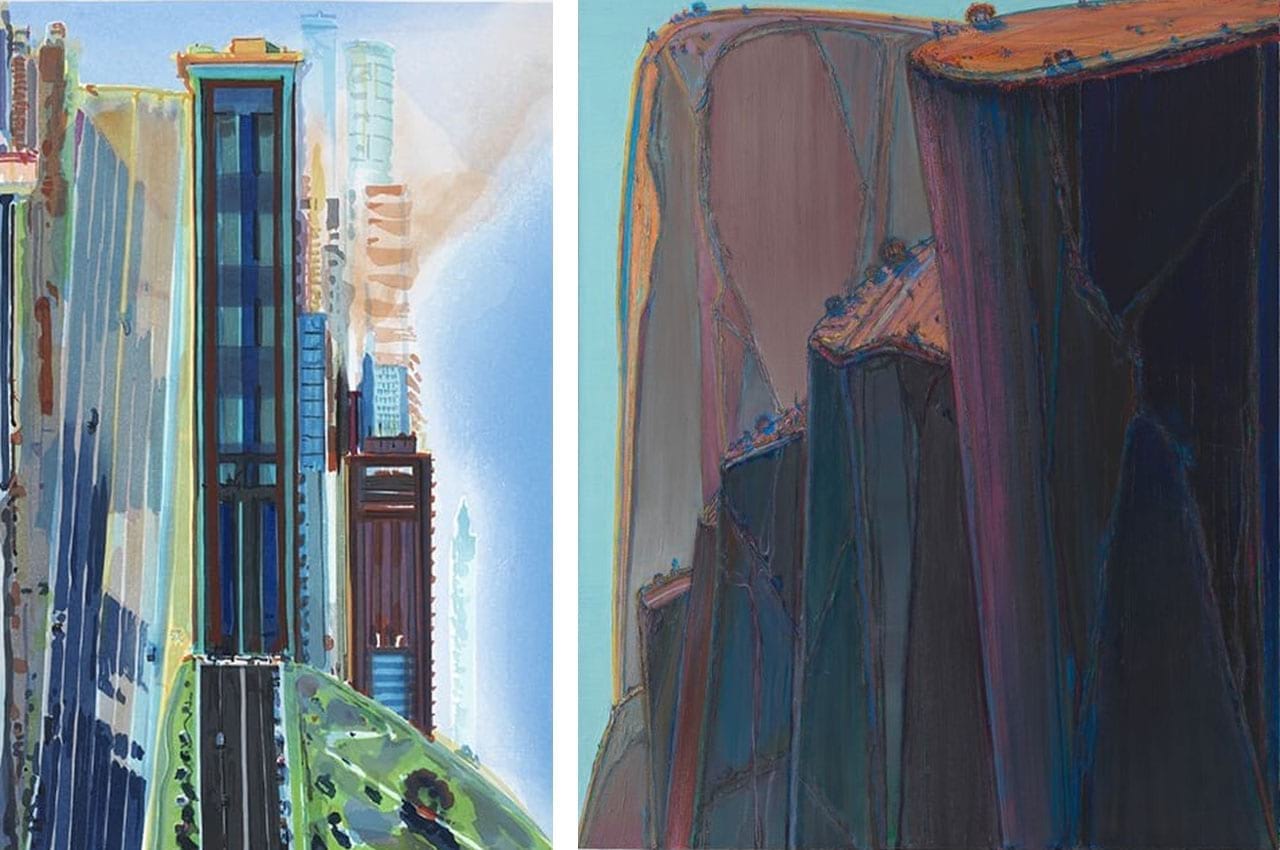 Thiebaud’s thick application of paint and the geometric patterning of his cakes slices, pie wedges and, layered pastries reveal the profound impact that both the Abstract Expressionist and Minimalist movements had on his work. His landscapes, cityscapes, and portraits demonstrate a similar mastery of color and expressive use of the paintbrush. In pieces such as Canyon Mountains and Hill Street, Thiebaud applies elevated perspectives and incorrect scales to create dream-like scenes that reflect his practice of working from memory. His landscapes, or visions, appear almost food-like in their abstraction and can be characterized by their relation to Californian lighting as well as European Post-Impressionism. His portraits equally lean on his own recollection, depicting unknown subjects against neutral backgrounds, inviting spectators to largely craft their own narrative. 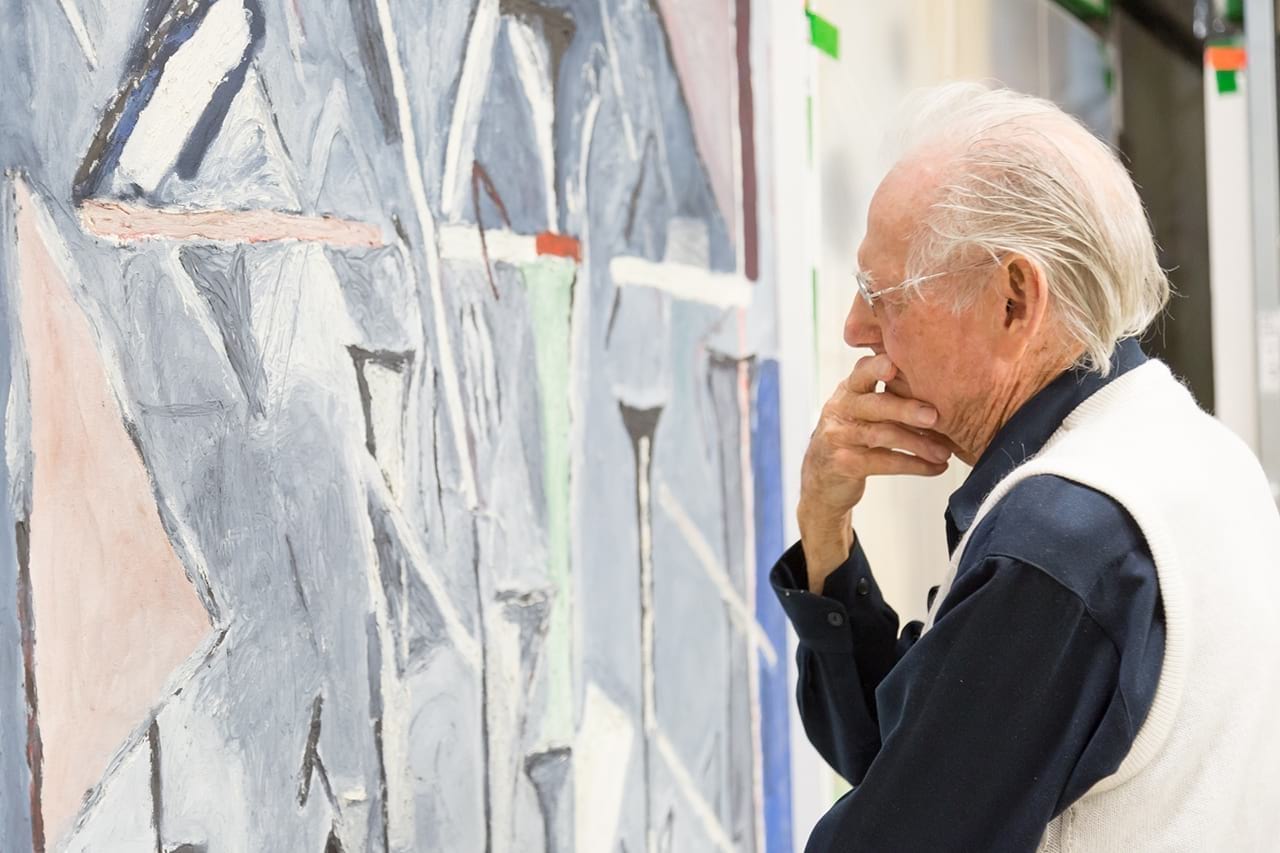 Often fitted into a linear narrative with Old Masters such as Vermeer, Manet, Cézanne and Hopper, Thiebaud’s paintings ultimately provide space for pleasure and express a humor that distances him from the rest of the art world. “I love when people smile or laugh or think they’re kind of goofy—because they are. The art world is seemingly quite suspicious of humor,” he once said. At the same time, in the sickly sweet colors of his desserts, Thiebaud depicts a yearning that cannot be satisfied, allowing perhaps a darker and more uncomfortable reading of his paintings. “I see as much sadness in my work,” he says, “as happiness.”