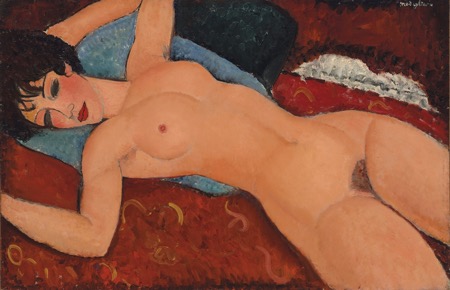 After a protracted bidding battle, Modigliani's Reclining Nude, 1917 was sold at Christie's New York on Monday for $170 million. It becomes the second highest price ever achieved at auction for a work of art.

This is the first time Reclining Nude has ever sold at auction having been kept in the same collection for the last 60 years. The Chinese collector Liu Yiqian, a billionaire who was born into poverty in Shanghai in 1963 won the painting after competing with five other bidders. Once a handbag seller and taxi driver he made his money in the 1980s in pharmaceuticals, real estate, and by trading stocks. Known for his eccentricity he once drank from a $35 million ceremonial cup he had just won at auction. He also owns two art galleries in Shanghai.

Some of the reasons for its immense popularity according to the BBC correspondent Will Gompertz is the fact that it is "easy on the eye, instantly recognizable, and has terrific wall-power. And that's enough to make it a trophy acquisition over which several bidders were willing to scrap."

Modigliani now joins the exclusive list of artists who have sold works at auction for over $100 million. He now stands alongside Andy Warhol, Francis Bacon, Alberto Giacometti, Pablo Picasso, and Edvard Munch. Picasso's Les Femmes d'Alger holds the record for the most expensive artwork ever sold at auction.