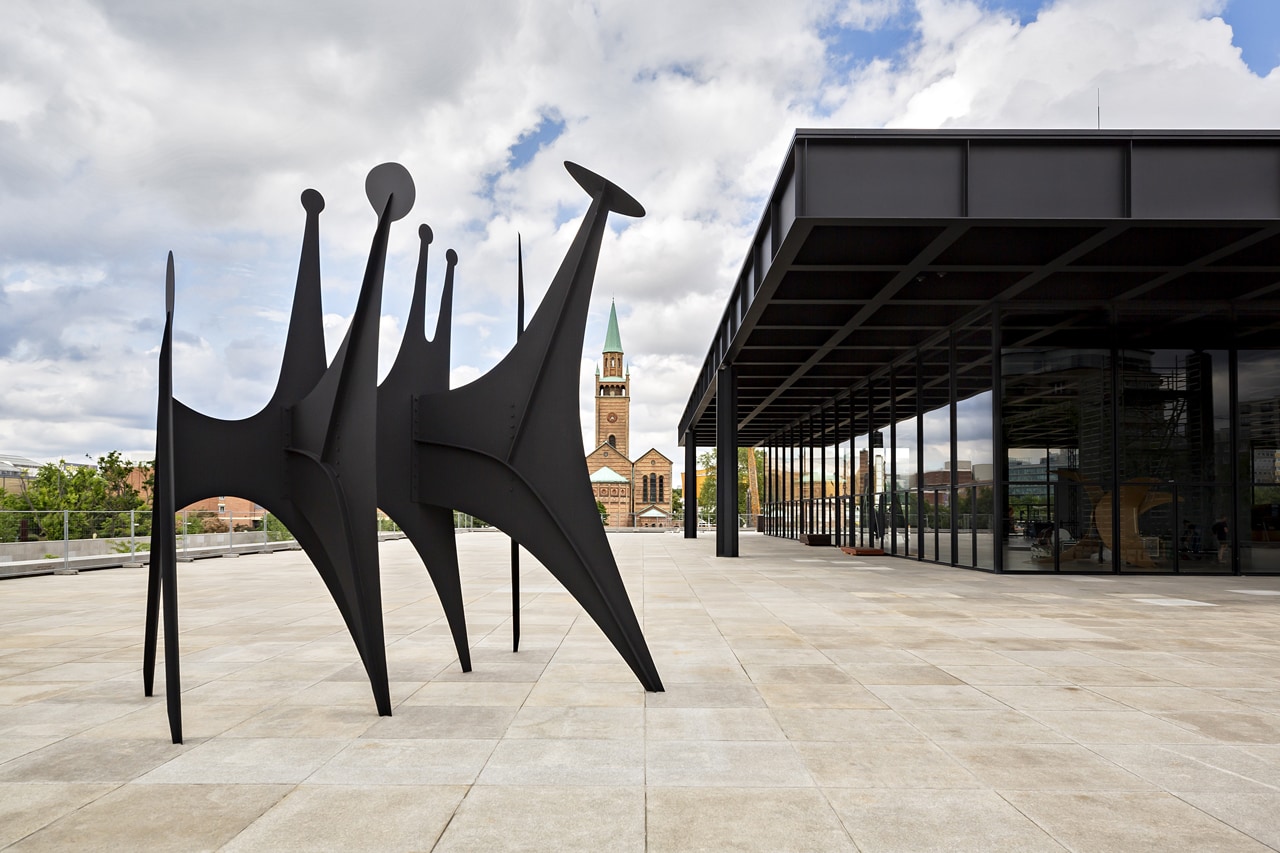 After 6 years of arduous renovations and at a cost of €140 million, the jewel in Berlin’s cultural crown is finally ready to reopen to the public. Ludwig Mies van der Rohe’s Neue Nationalgalerie is one of icons of twentieth-century architecture. With its “floating” roof hovering above a light-filled hall of glass and black steel, this Modernist masterpiece appears more like a temple than a state-owned institution. So striking and monumental, that it can steal the spotlight from the artists and artworks it’s exhibiting – not that any artist in the world would dare pass up the chance to exhibit there.

Built between 1965–8, the museum is the fullest and finest example of Mies’ exploration of the modern steel frame, which removed the need for structural walls and so enabled this crisp, visionary, black pavilion we see today. But it was a building fraught with technical and structural problems. Condensation on the enormous window panes caused severe erosion to its steel metal framework. It was such a problem that museum staff once laid out thick blankets to soak up this excess water – incensed, Mies threatened to throw the blankets into the streets. 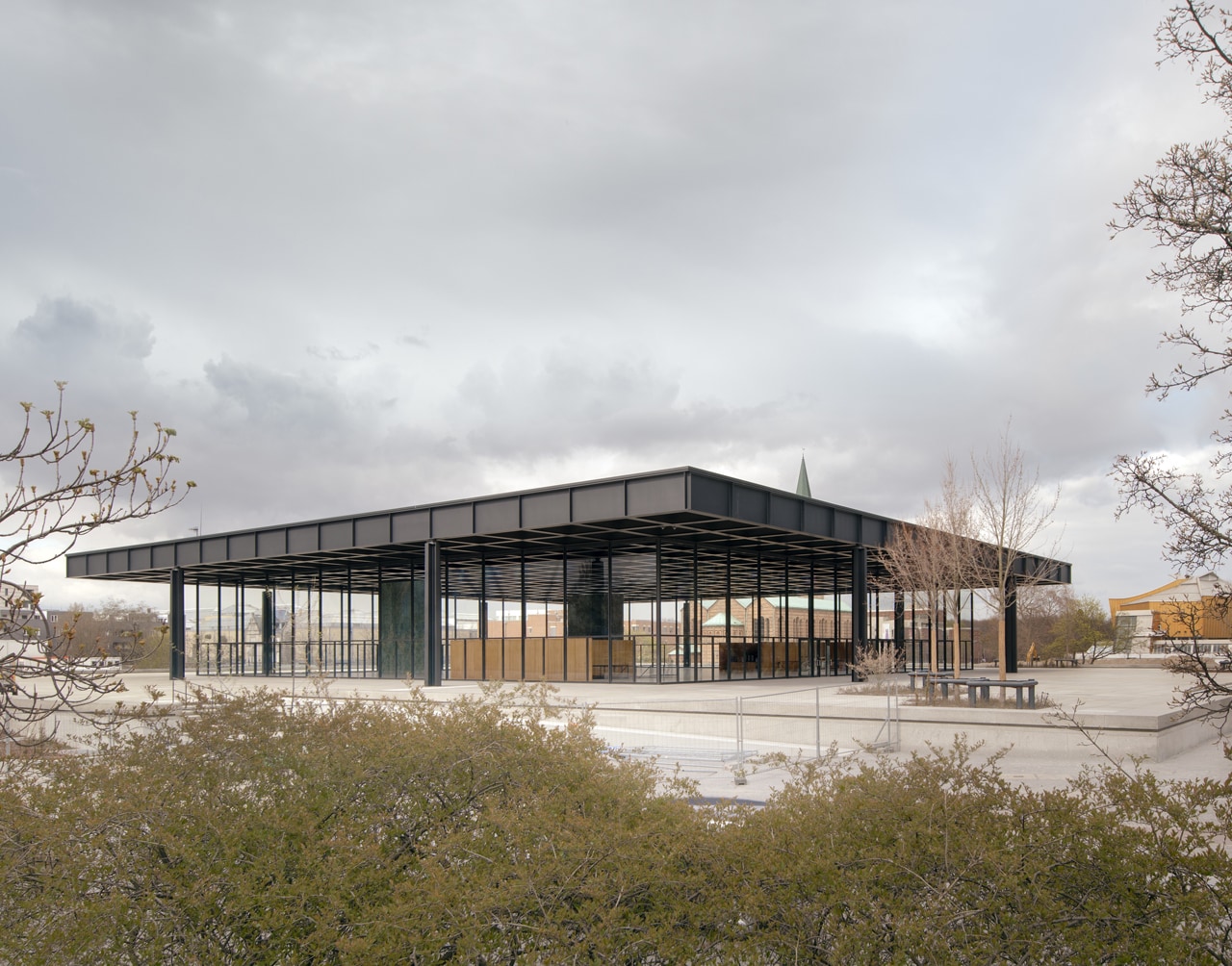 By 2015 the museum was in a frightening state. The steel of the façade was so corroded and deformed it was breaking the glass, posing a serious safety risk to the public. A complete gutting of the building was necessary as well as a removal of hazardous building material (asbestos) used in its original construction. Who did they turn to? Which architect does the Prussian Cultural Heritage Foundation always seem to turn to? The modernist austerity of British architect David Chipperfield.

With the mantra to keep “as much Mies as possible”, their choice would prove to be inspired. “Our work was surgical in nature,” Chipperfield has explained, and with the precision of a surgeon, David Chipperfield Architects meticulously dismantled, stored and reassembled the Neue Nationalgalerie. From 14,000 granite slabs to a Mies designed ashtray, all in all it amounted to more than 35,000 individual components.

Each new day brought with it a new challenge: how to preserve the buildings famous style while trying to raise the building’s performance to meet the standards of a modern museum. But by far the greatest issue, according to Martin Reichert, the project director, was in “renovating the spectacular glass façade.” Despite pressure they refused to compromise on Mies’ original aesthetic, rejecting the idea of double-glazed windows and opting instead for thicker single panels – so big that the only manufacturer they could find was in China.

They added climate control, lighting, security, accessibility, visitor facilities even behind-the-scenes art infrastructure but no café in the sculpture garden. That would be a step too far, explained Joachim Jäger, the head of the Neue Nationalgalerie, Mies designed it as “place of reflection, not pleasure”. Now fully renovated the recessed garden is a dazzling spectacle punctuated by figurative sculptures and David Black’s restored sculpture Skypiece. 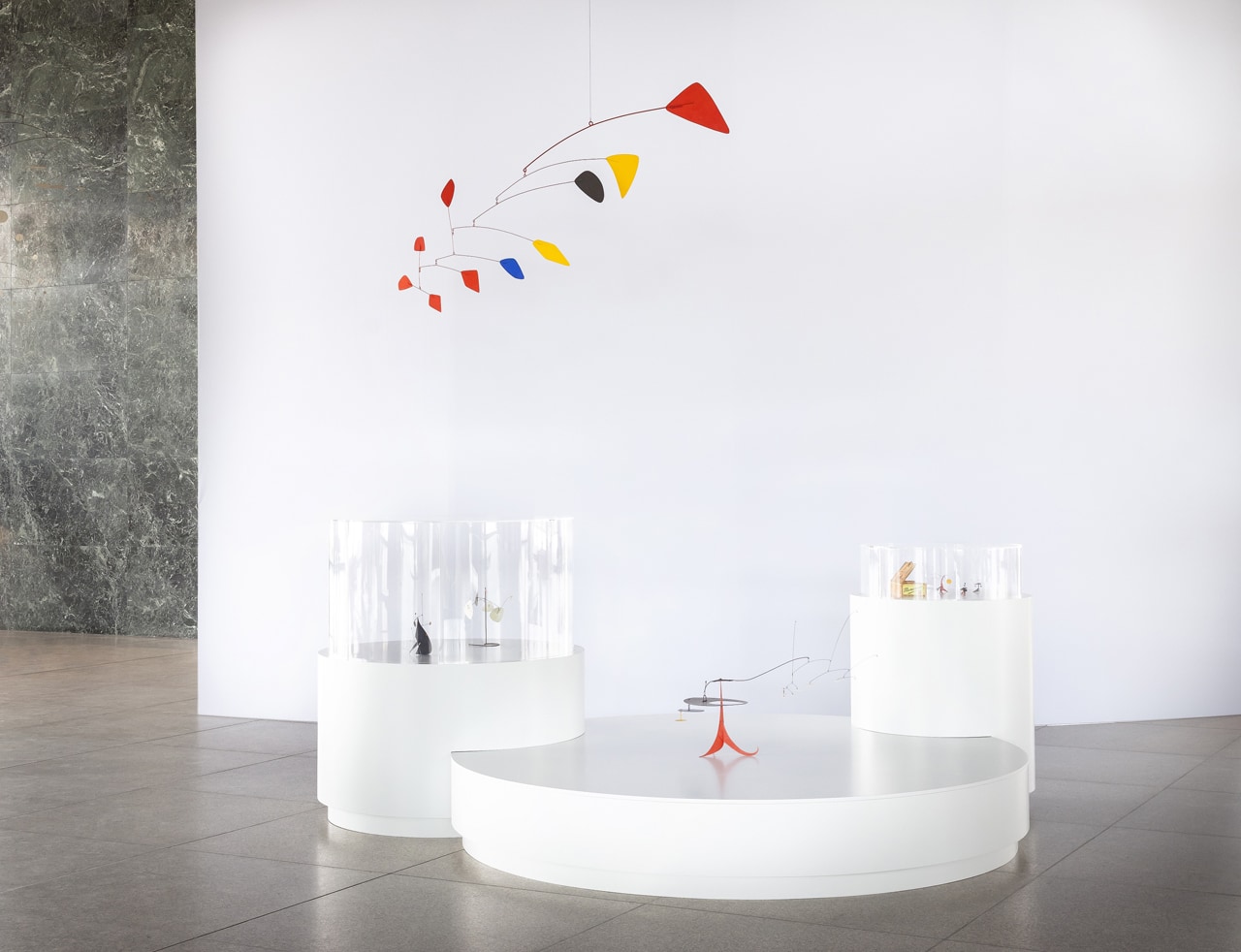 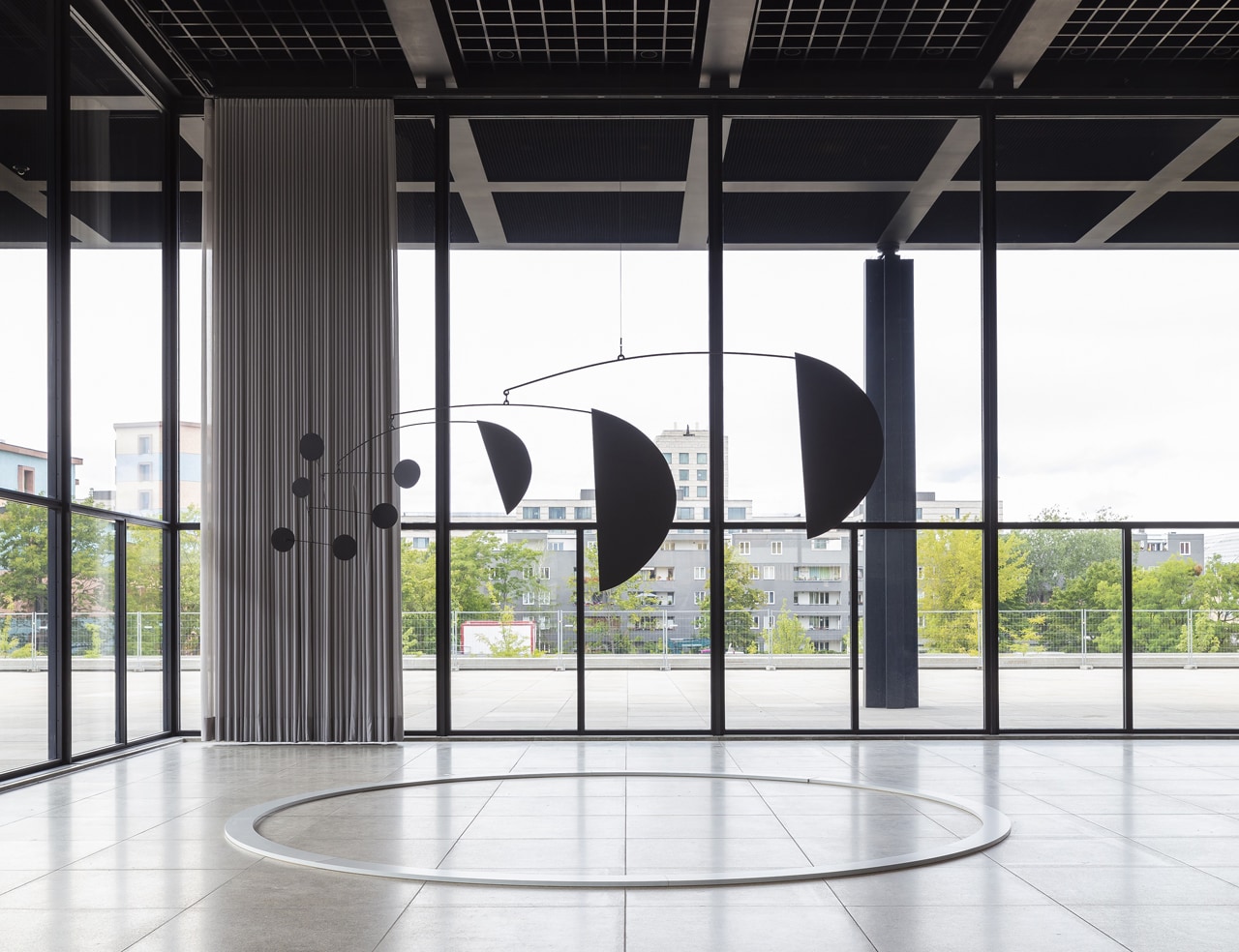 When it comes to this type of sensitive reconstruction, there’s of course not much new to see – perfectly adhering to Mies’ famous adage “less is more”. But with all the talk of the renovations it is possible to forget its main purpose: Berlin’s main exhibition hall for painting and sculpture of the 20th century with an emphasis on classic modern art. In its time it has staged more than 130 exhibitions, from a Francis Bacon Retrospective in 1986 to two Gerhard Richter Retrospectives in 1986 and 2012.

It falls on the American artist, Alexander Calder, one of Mies’ contemporaries to be given the honour of the first show in the legendary glass hall. Both of them had a major influence on the Modernist understanding of art and architecture, and where Mies’ greatest achievement was in freeing architecture from enclosure, opening it up for social engagement, Calder’s interactive mobiles opened up the possibility of art to a wider public, introducing elements of movement into sculpture.

Occupying the central position in the hall is Calder’s Five Swords, a prodigious and expressive sculpture made of red sheet metal, that stands in striking contrast to the Neue Nationalgalerie’s geometric severity. Alexander Calder famously declared that “above all, art should be fun” and what singles out this exhibition will be the fact it relies upon the participation of visitors, who will be able to actually move his giant mobiles and sit down around tables and play on one of Calder’s blue and red chess sets. 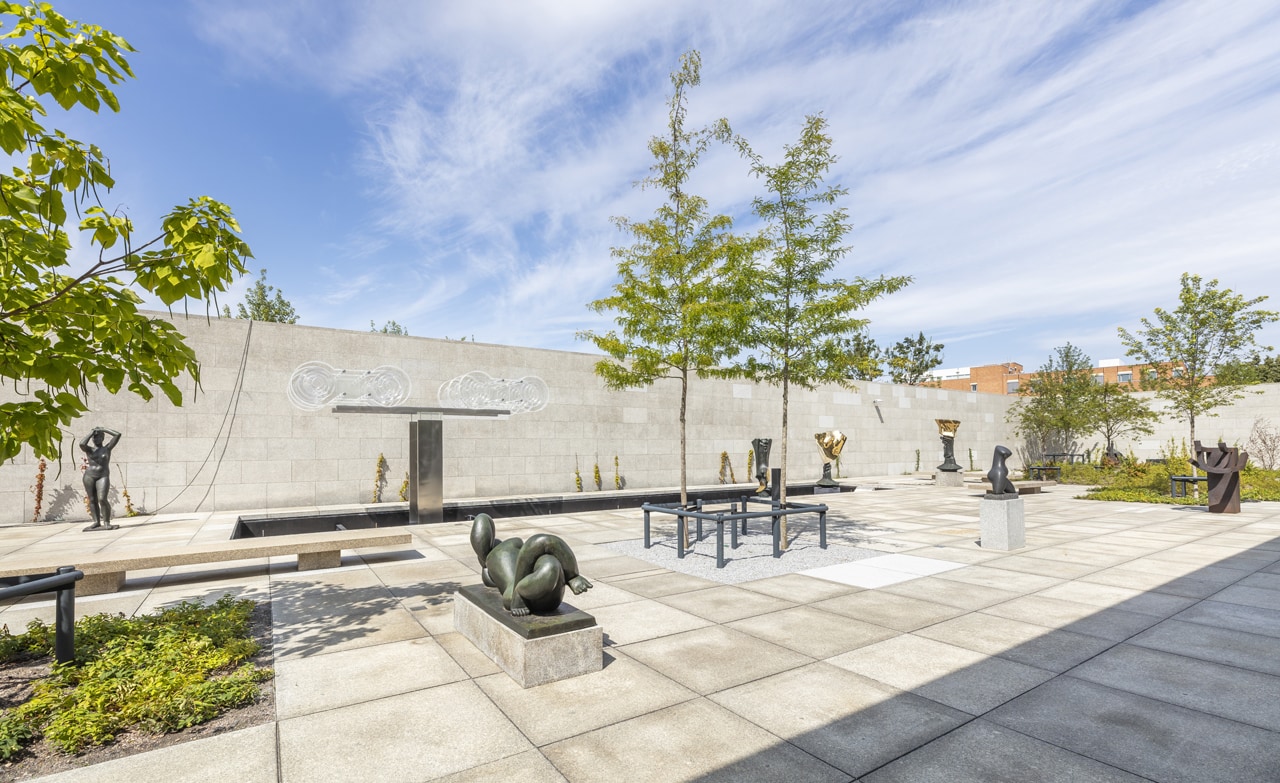 And so from one construction site to another. Next door to the Neue Nationalgalerie bulldozers and cranes are already digging deep in Berlin’s notoriously swampy soil to begin work on the Museum of the 20th Century designed by Herzog & de Meuron. It is the solution for the last undeveloped site at the Kulturforum and the two museums will be linked together via an underground tunnel. Despite its spiraling costs (€450.2 million), there has been concern from some quarters that the museum could overshadow Mies’ more slender Neue Nationalgalerie.

Although that seems unlikely. Mies’ black temple sits atop a wide base which elevates the architecture above the urban space. Its monumentality arising not from its scale but its symbolism and stature, a building once inextricably linked to Germany’s political division and one that now unquestionably defines Berlin’s position as one of the world's great centers of art.