Ever since she rose to prominence in the 1990s, already well into her 70s, Louise Bourgeois was celebrated for her large-scale sculptures and installations – like the enormous bronze arachnids that tower over the audience. Now – over a decade since her death – two exhibitions dedicated to lesser known aspects of her oeuvre (an exhibition showing her little known paintings at The Met in New York and a retrospective dedicated purely to her textile work at Berlin's Gropius Bau) defy the art world’s reductive habit of easy categorisation. Both exhibitions reveal the wild expansiveness of her art practice and demonstrate her inventive ability to work across mediums. For her, making art was an integral part of her psyche: “I need to make things.” She once said. “I need to have these objects exist in relation to my body.”

Such has been the impact of her previously unseen paintings, that the New York Times critic, Roberta Smith, believes they now completely “disrupt the history of New York painting in the 1940s as a linear, mostly male endeavor.” These paintings were made between her arrival in New York in 1938 and her turn to sculpture in the late 1940s. Then came her decades of large-scale cells and spiders. It was only much later in life, having stumbled across her childhood dresses and her mother’s old clothes in large chests at her home in New York, that she suddenly discovered all the raw material for her next and final body of work. 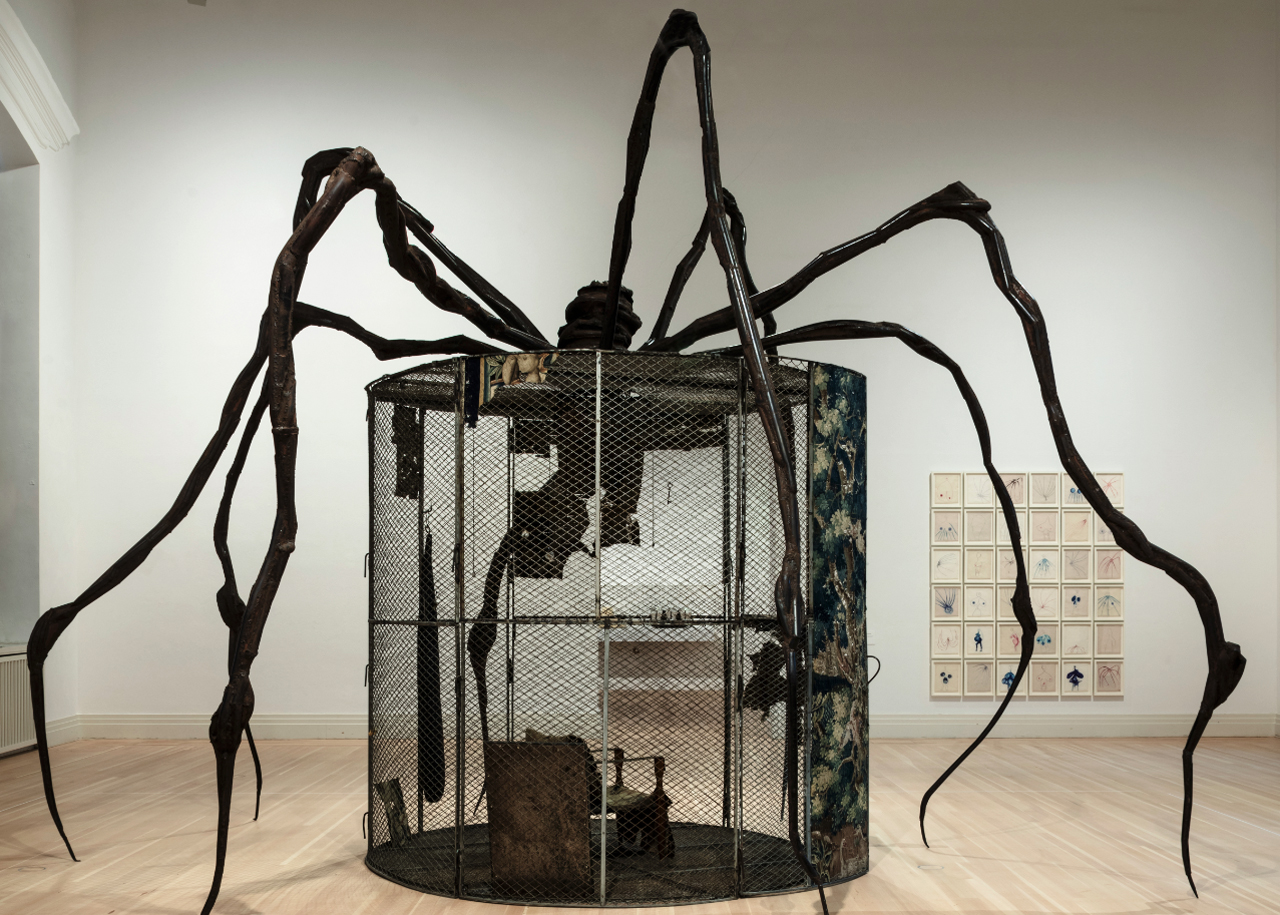 “She would just keep everything,” says Julienne Lorz, co-curator of “Louise Bourgeois: The Woven Child” at the Gropius Bau. “These fabrics have been worn close to a person’s skin and are close to the heart and emotions. So using them became a way of preserving her own personal history.” As a twelve-year old girl, Bourgeois would help out at her parent’s tapestry restoration workshop, drawing in the missing sections that needed to be repaired. “I always had the fear of being separated and abandoned,” she once said, “the sewing is my attempt to keep things together and make things whole.”

Some of her earliest fabric sculptures from 1996 are included; dark monochrome figures all roughly life-sized but bereft of hands, feet and heads. In Couple III, a pair of black headless bodies are enclosed within a claustrophobic dark wood and glass vitrine. Suggesting the oppressive nature of male-dominated heterosexual relationships, the prosthetic limb of the female doll clings on whilst her body is slowly crushed by the weight of the male doll above it. 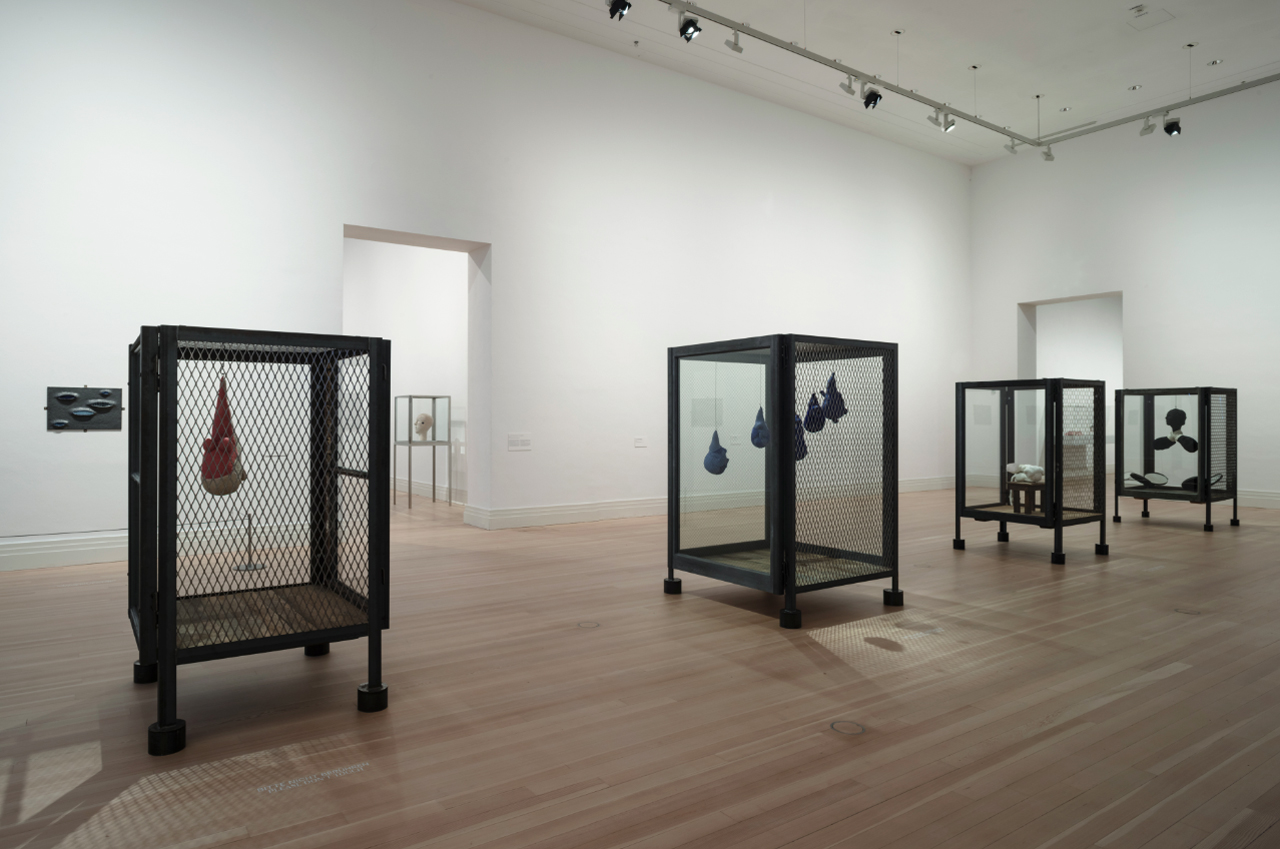 Bourgeois was never afraid to use her life as a source of her art, the narrative stitched together as carefully as the works’ themselves: “If your need is to refuse to abandon the past, you have to recreate it.” She said once, “You have to do sculpture.” The story of her father’s affair with their teenage English governess, Sadie, right under the nose of his wife (Bourgeois’ mother) has woven itself into contemporary art folklore. Bourgeois only found out about the double betrayal from the gossiping girls who worked at the tapestry workshop.

For many, this story, became the central prism through which much of her work was viewed, not least because of a careful perpetuation of that story by the artist herself: “Everything I do is inspired by my early life,” she once remarked, somehow managing to be effusive and maddenly opaque all at once. Her art had the remarkable ability to crystalise a young girl’s sense of vulnerability with potent, more adult themes of violence and brutality. And through centering her work around the extremes of emotional intensity, she not only drew from these early childhood memories but also the act of art making itself and motherhood. One of the most impactful works in the exhibition is The Good Mother, where long white threads protrude out of the breasts of a small pink mother figure. Locked in a vitrine (cell), the rolls of yarn trap her in a seemingly never ending cycle of reproductive necessity. 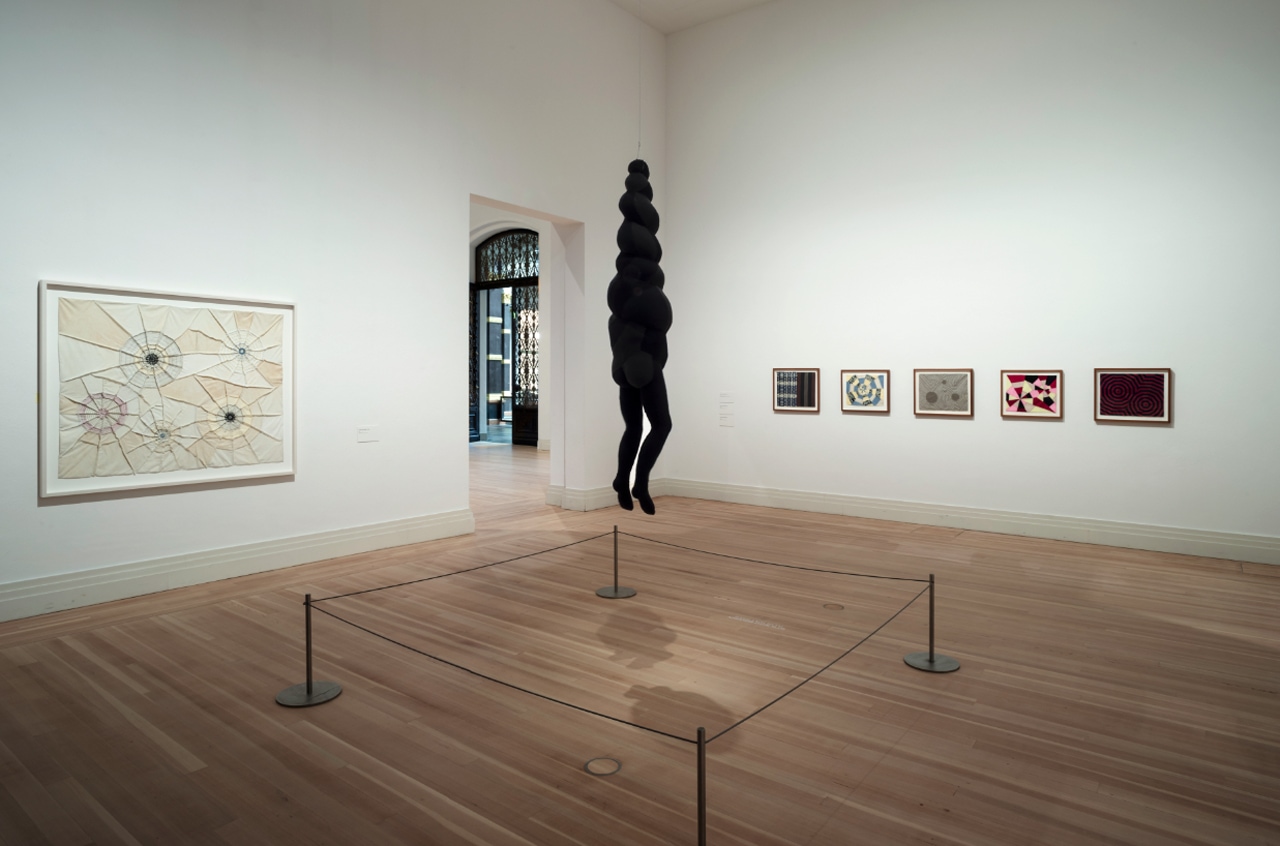 So many of the figures in this latest exhibition possess an unsettling and disturbing presence and these howling or despairing heads resonate with ambiguity, like the sexualised limbless doll in High Heels, (1998). This armless female figure, with absurdly voluptuous buttocks, wears a pair of shiny steel high-heeled shoes – the most fetishised accessory – to create a wholly unsavoury combination of fashion, art and sex.

Not surprisingly the curators have managed to include one of her arachnids, Spider into the exhibition. It is the only time she combined a spider with one of her cells and it is an astounding work of art. Hovering protectively over the meshed (web) of the cell, the inside contains a tapestry-covered chair and a bottle of Bourgeois’s favourite scent, Shalimar. “Louise had this fear of getting rid of anything.” says Jerry Gorvoy, her longtime studio assistant. “And when she was quite old, I think she wondered what would happen to all these objects that had meaning to her, and I think she knew that if she incorporated these things within the work, they would survive much longer than her own physical presence.”

Although the work is cordoned off (you will get hissed at by the guides if you stray too close), when it was first unveiled in 1997, visitors could sit down in the chair and experience the spider looming above them. Bourgeois always said the spiders were inspired by her seamstress mother: “neat, and as useful as a spider.” Standing beside the work, you see how utterly focused she was on the female perspective, a point that is in no way a criticism, rather a reminder that she managed to put female experience and feminist themes so urgently in the public sphere. Balancing above such thoughts, existing between beauty and repellence, the tremendous presence of the spider guards over the contents of the cage that manages to express a lifetime’s worth of memory and anxiety.