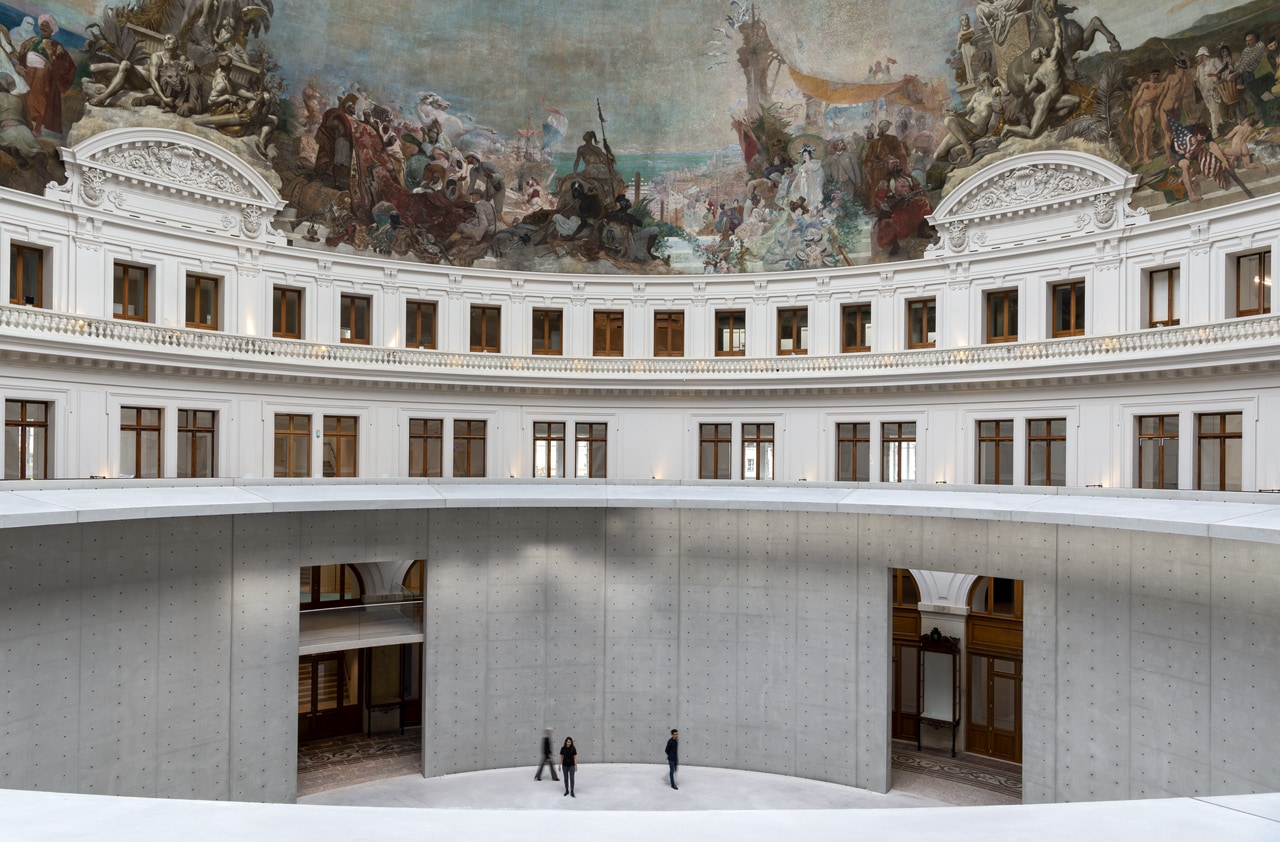 As a young boy living in Brittany during the Nazis Occupation of France, Francois Pinault used to smuggle food and supplies to Allied soldiers who were hiding near his home. Walking back to his house after having just made a drop off, he was suddenly accosted by a German patrol who began viciously beating his father in an attempt to make one of them talk. Both of them refused to speak and, as legend has it, the seven year old Pinault didn’t even blink.

That show of resolve and determination has characterised the mindset of a man who almost singlehandedly built up the hugely successful multinational fashion corporation, the Kering Group. Boasting a personal fortune estimated to be in the region of around €40 billion, his devotion to contemporary art has made him into an artworld kingpin, building up an art collection of astonishing richness and scope, with works by Mark Rothko, Roy Lichtenstein, Jackson Pollock and Andy Warhol.

Yet on the eve of his new art space opening in Paris, in the apt surroundings of the Bourse de Commerce – a former stock exchange – the later half of Pinault’s life has been marked by his rivalry with another billionaire art collector, Bernard Arnault, the chairman and chief executive of LVMH and the richest man in Europe. For decades these two Frenchman have jostled for position, their two great loves, business and art, allowing them to dominate the cultural landscape of their homeland and only occasionally letting their rivalry spill out into the public domain. 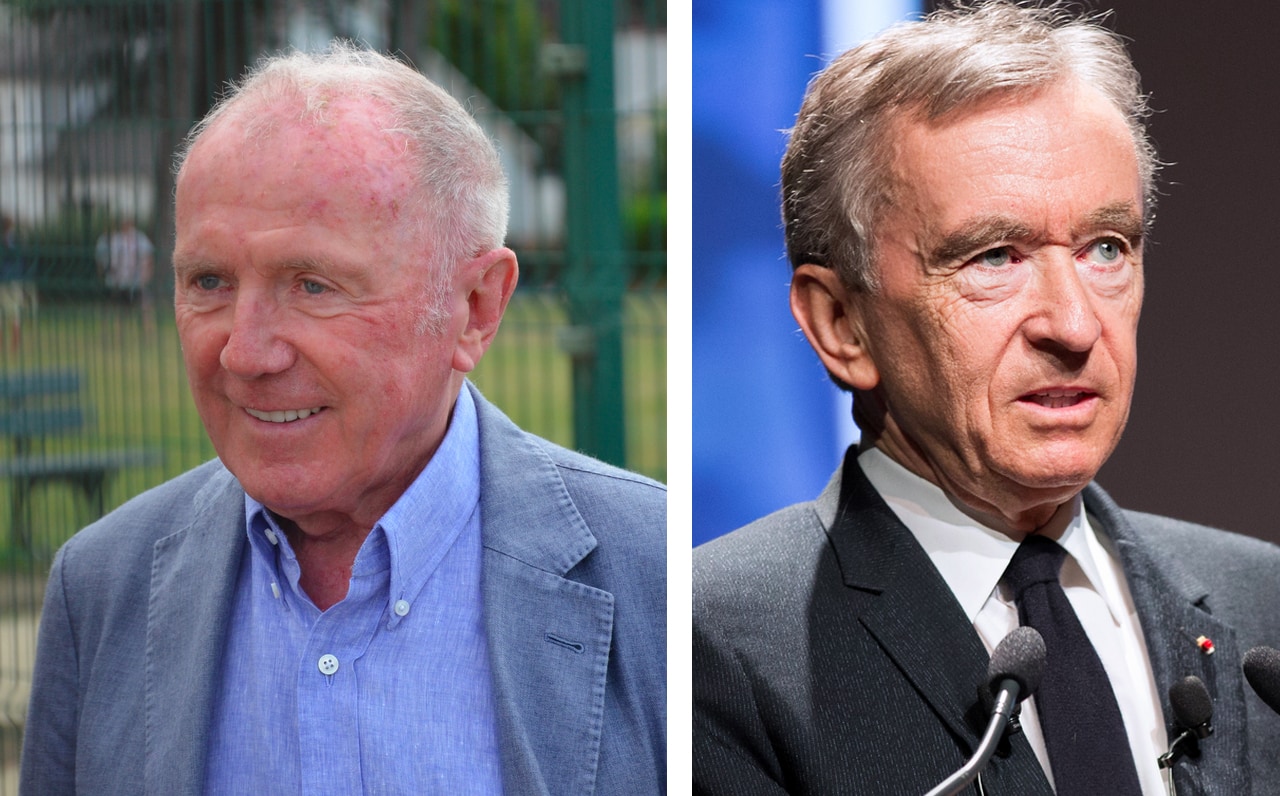 In 2019, in the aftermath of the fire that ripped through the 850-year old Notre Dame Cathedral, the Pinault family announced the donation of €113 million to aid the reconstruction of the iconic Parisian landmark. A hugely significant sum in a country that rarely sees cultural philanthropy extend beyond individual patronage. Less than a day later, however, Arnault trumped his billionaire rival by pledging €200 million for the reconstruction. A typical show of one-upmanship that must have irked Pinault, a man not used to being pushed into second place.

Born in 1936, into a family of modest timber traders, Pinault left school at 16 without any qualifications. Starting work for the family firm he began buying up timber companies and small businesses, quickly turning them into highly profitable enterprises – often by ruthlessly culling the management teams. Blessed with good timing and a lack of sentimentality, he gradually amassed a fortune by ‘using government aid to turn them around and sell them at a profit’.

Where Pinault really excels is in deal making, working behind the scenes and forcing through his agenda. “I have no sense of nostalgia.” He once said, “Tomorrow is what interests me.” That ruthless streak could be said to have been the catalyst for the start of one of the most bitter fights in corporate history. Dubbed ‘The War of the Handbags’, Pinault’s careful manoeuvering somehow enabled him to buy a controlling stake in Gucci right under the nose of Arnault’s Louis Vuitton Group who were in the painstaking process of negotiating a deal with the Italian fashion house. 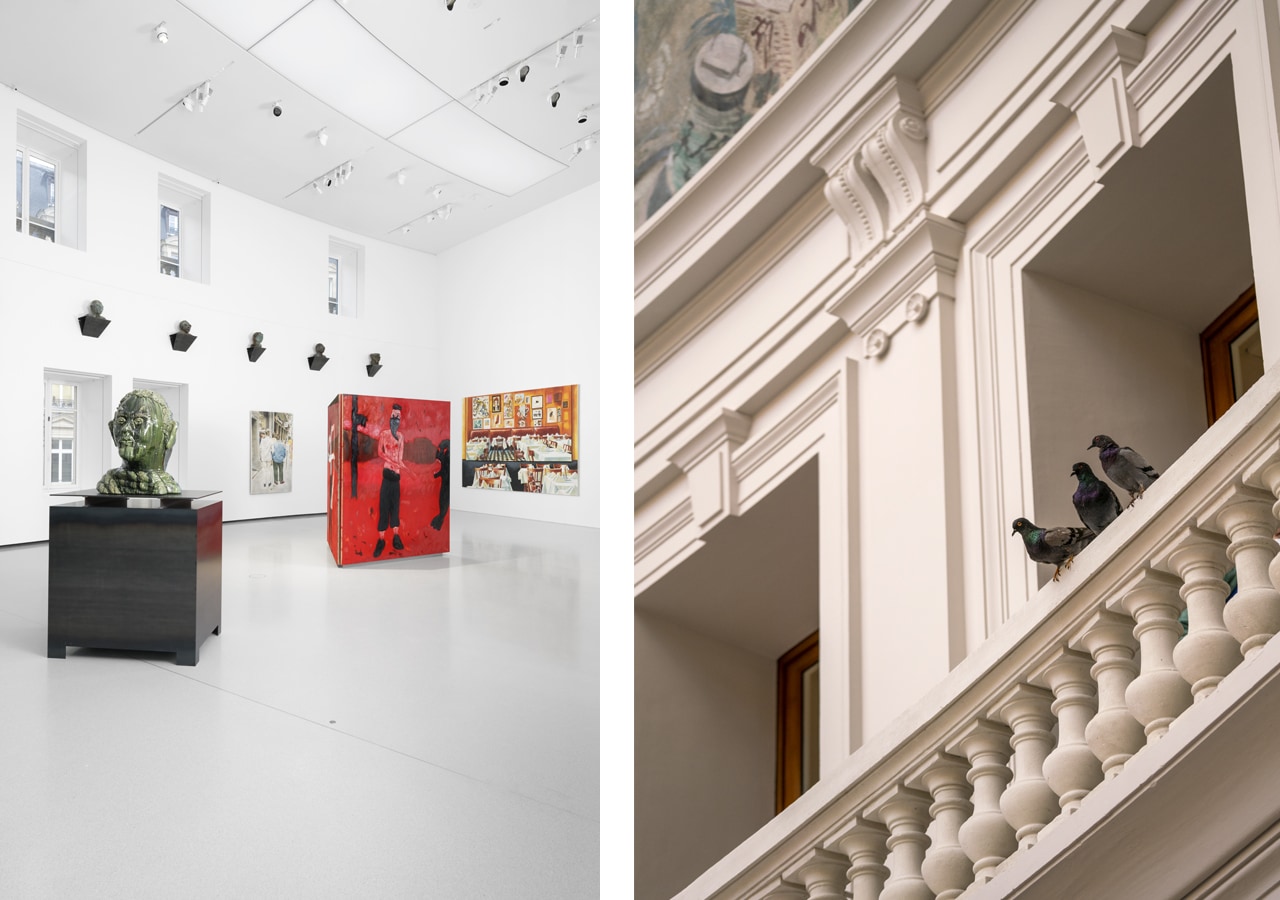 Gucci was the stepping stone Pinault needed to build up a luxury powerhouse that now includes Yves Saint Laurent, Balenciaga and Bottega Veneta among many others. In 2003 he handed over the management of his businesses to his son, François-Henri, the husband of Hollywood actress Salma Hayek, so he could concentrate fully on building up a collection that includes works from an international array of contemporary artists including Takashi Murakami, Tatiana Trouvé and Urs Fischer. Since 1998 Pinault has been in the possession of Christie’s auction house, an acquisition that has no doubt had a significant impact on the size and scale of his collection.

The opening of this new Parisian space is the fulfilment of a long held dream by Pinault. In 2004, with the bulldozers poised to begin work, his plans to build a private museum on the Île Seguin in Paris were abandoned after environmental complaints and threats of legal action derailed the project. In response, Pinault opened two spaces in Venice: Palazzo Grassi on the Grand Canal, inaugurated in 2006, and Punta della Dogana, that opened in 2009. In 2017 the two venues put on one of the largest private exhibitions ever shown, Damien Hirst’s hugely ambitious “Treasures from the Wreck of the Unbelievable”. 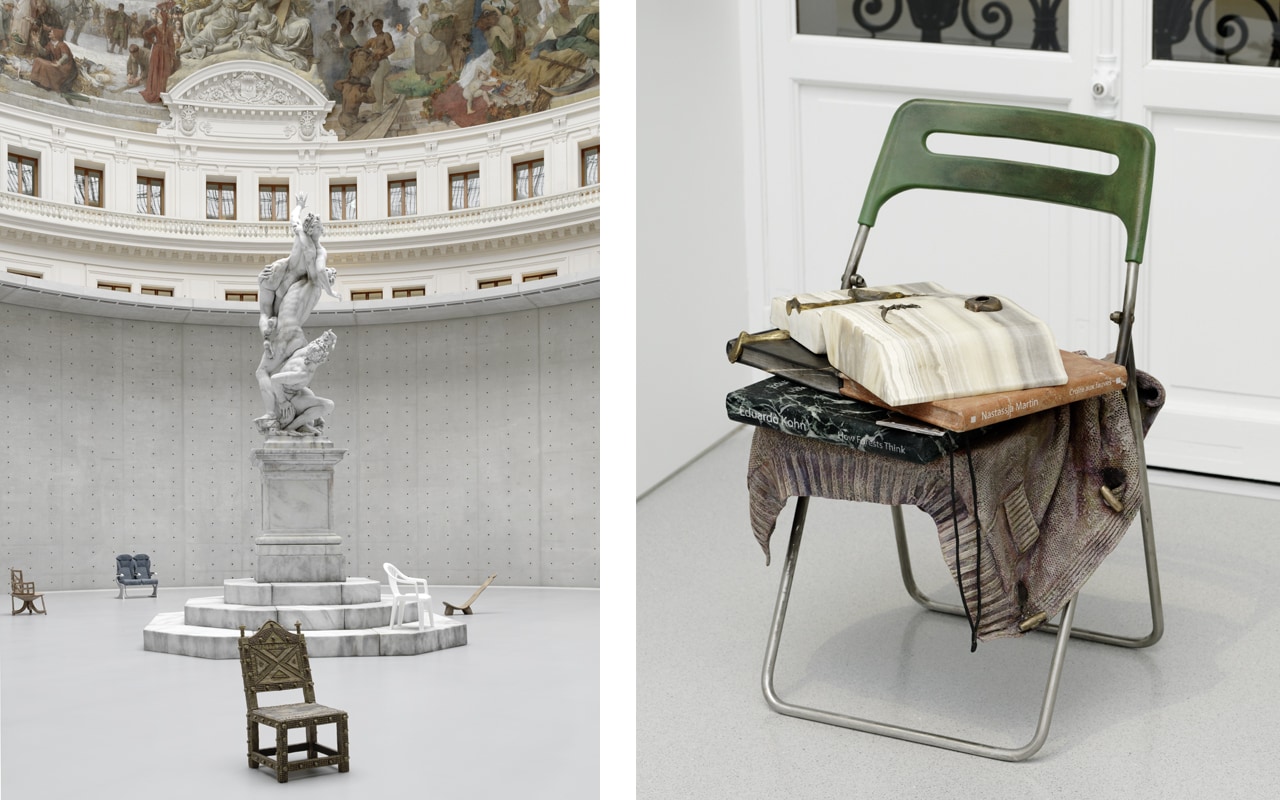 But despite the success of his Venetian spaces which have become established destinations in the art world’s summer tour, Pinault has been forced to watch the spectacular success of Arnault’s and Fondation Louis Vuitton’s extravagant Frank Gehry designed space on the Bois de Boulogne in Paris. Housing LVMH’s permanent contemporary art collection, it features the specially-commissioned installation Inside the Horizon by Olafur Eliasson on the building’s exterior.

Now with the opening of The Bourse de Commerce, located in Les Halles, a short walk away from the Louvre, Pinault has the chance to catch up. The former 18th-century grain exchange has been transformed by his longterm architect Tadao Ando into a landmark museum, installing a 33-metre concrete tube inside the original dome of the building to create a presentation area that’s in keeping with the original heritage listed building.

‘One of the greatest virtues of the artistic experience is its ability to open up new horizons’, reads Pinault's press statement, which is ‘why I am passionate about the great adventure of creation.’ And rather than show flagship works from a collection that is believed to number as many as 10,000, he has instead ‘decided to present the pieces that speak to [his] approach as a collector.’ Such as Tatiana Trouvé's The Guardian, a series of eight chairs, each holding the belongings of a fictional guardian who once supposedly sat there; a new enormous candle work by the Swiss artist Urs Fischer, which will be set alight for the opening and burn for the six month duration of the first exhibition; and a sound installation installed in the basement by Pierre Huyghe, that provides a journey through a deeply sensory and poetic experience. 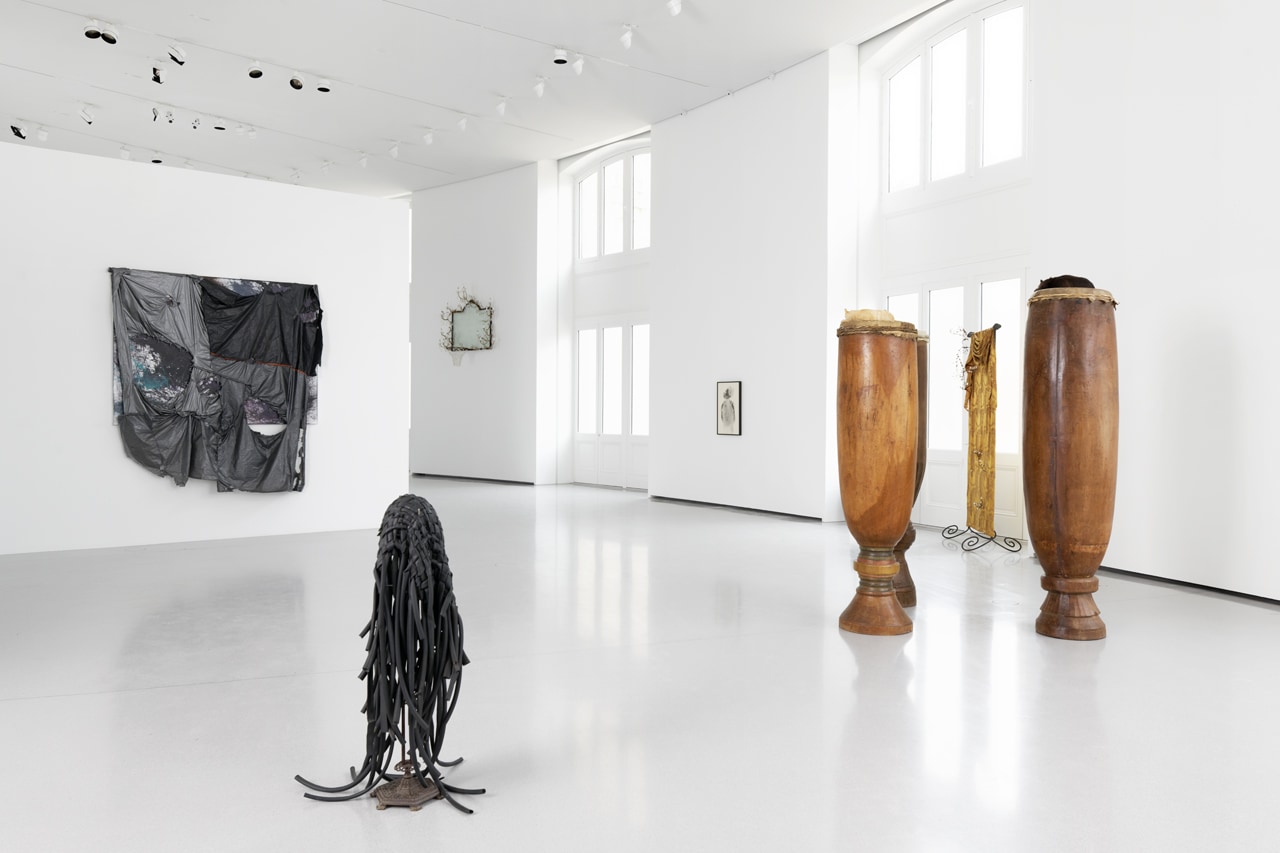 How Pinault’s The Bourse de Commerce will fit into Paris’ competitive cultural scene remains to be seen, though perhaps more intriguing a question is how it will compare to Arnault’s space across the city. The two men vying for the coveted title of prince-patron have a lot more in common then they would care to admit, and their shared passion for collecting art continues to be of invaluable benefit to the wider art world and especially to all upcoming visitors to Paris.