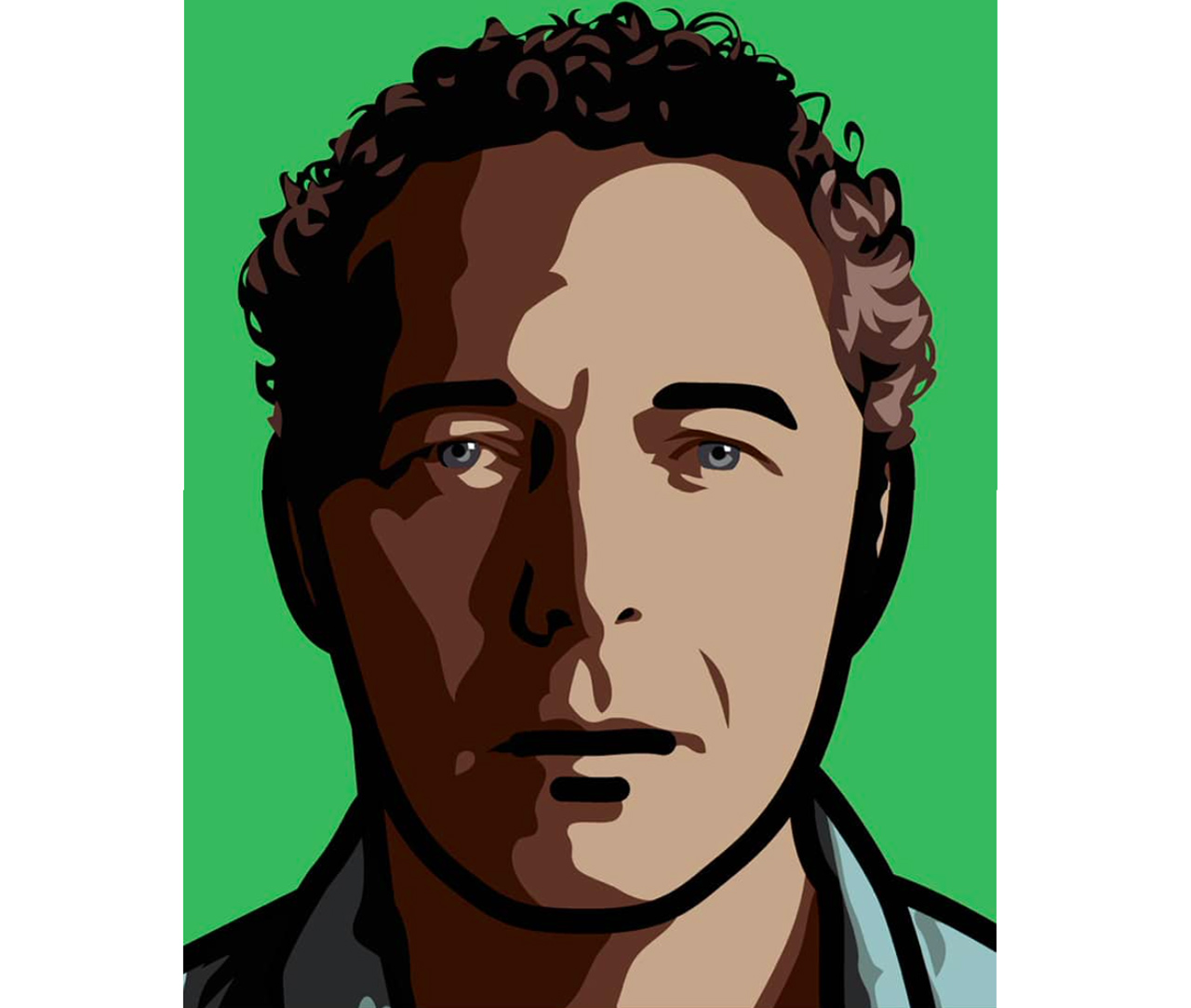 “My kids tease me and say daddy you could buy a car for that money but then how many cars do you want!”  Julian Opie

The hugely popular and celebrated contemporary artist Julian Opie is also an avid and obsessive collector. Everything from Egyptian sarcophagi, Japanese Ukiyo-e woodblocks and great works of contemporary art are included in his collection which is now on show alongside his own works at Newlands House. He takes us through his collection style and tells us about some of his favourite discoveries.

FAM: You’re such an acute observer of people’s movements and characteristics, I was wondering if the slower pace of life during the pandemic starved you of inspiration?
Julian Opie: To a degree but I work down near the city and it was still full of people with galleries and design studios. I did end up drawing lots of buildings, which I might not have focused on otherwise. But with a lot of people working from home it gave me the chance to focus a little more on my work without that sense of rush. Now of course, all those postponed shows, like this one, are catching up with me.

You will be exhibiting your personal art collection alongside a selection of your own works at Newlands House in Petworth. Where did the idea for this exhibition come from?
Well a curator got in contact with me who had connections with Newlands House, and with its many smaller rooms it was the ideal place to have dedicate spaces, so we have a room solely for Indonesian beadwork. I find that as an artist, venues tend to choose you. 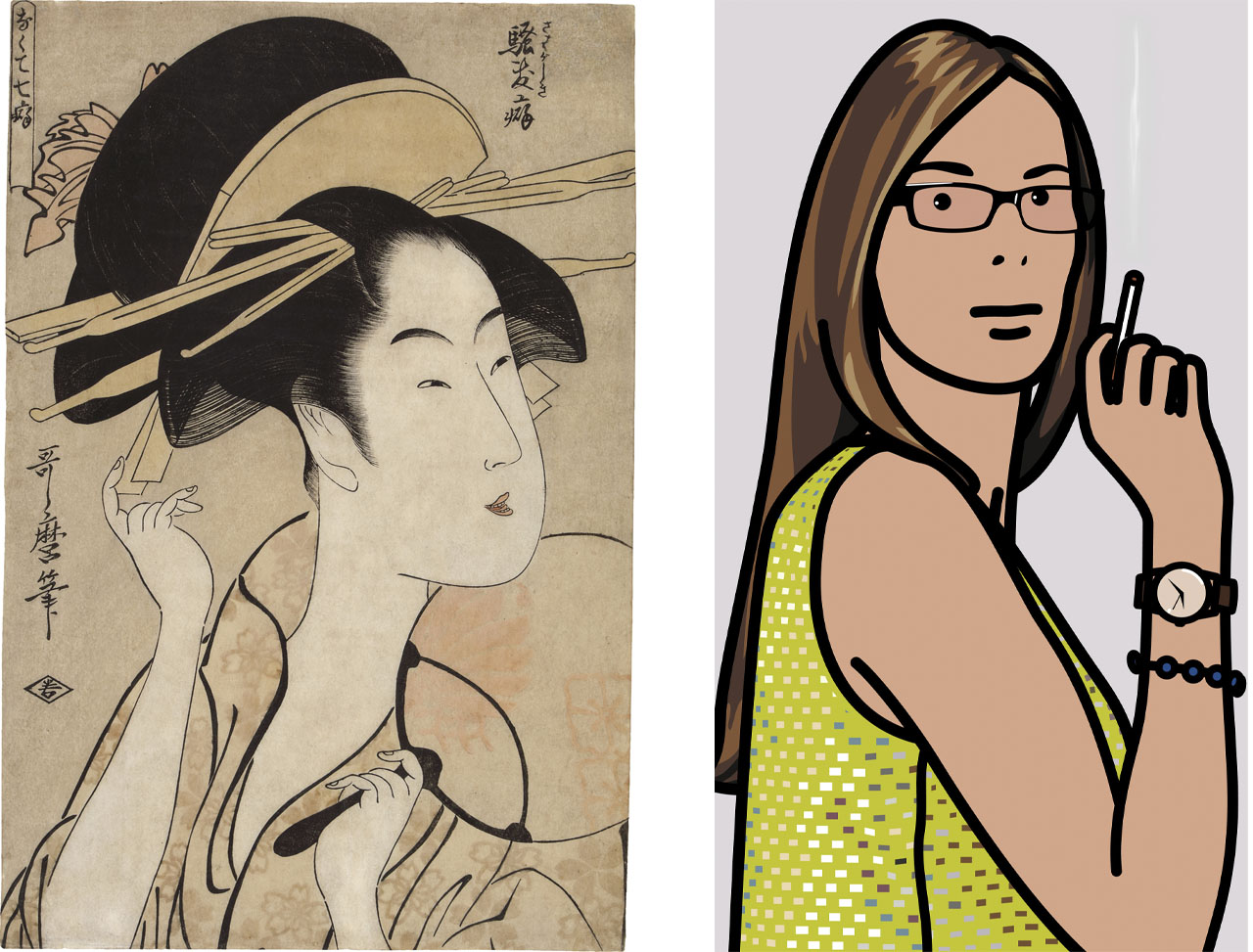 How would you describe your collecting habits?
It is a sort of obsessional disease, you catch it and is hard to get rid of it. When I was younger I didn’t have the funds or space to really collect, but on the occasions that I did I would buy something small, like a little Carl Andre work back in the 80s. Every now and then when something was affordable like a Japanese woodblock print or a silkscreen poster by Lichtenstein I would buy it. Sometimes worlds seem to cross and you can end up with surprisingly amazing things. I got two Gary Hume tapestries sold by the Royal Academy as an edition to raise money for charity. I love Gary Hume and these are really cool and cost nothing.

What’s one of the more unusual works you’ve bought?
When I was painting a lot of portraits about 20 years ago I noticed in a nearby art gallery a painting from the school of Godfrey Kneller from the mid-late 17th century. And I thought God that’s exactly what I am referring to without actually knowing I am referring to it. In the background it looked a bit out of something from Cocteau’s Beauty and the Beast, a classic old master painting in a spooky castle. I bought it and it wasn’t so expensive. Although my kids tease me and say daddy you could buy a car for that money but then how many cars do you want! 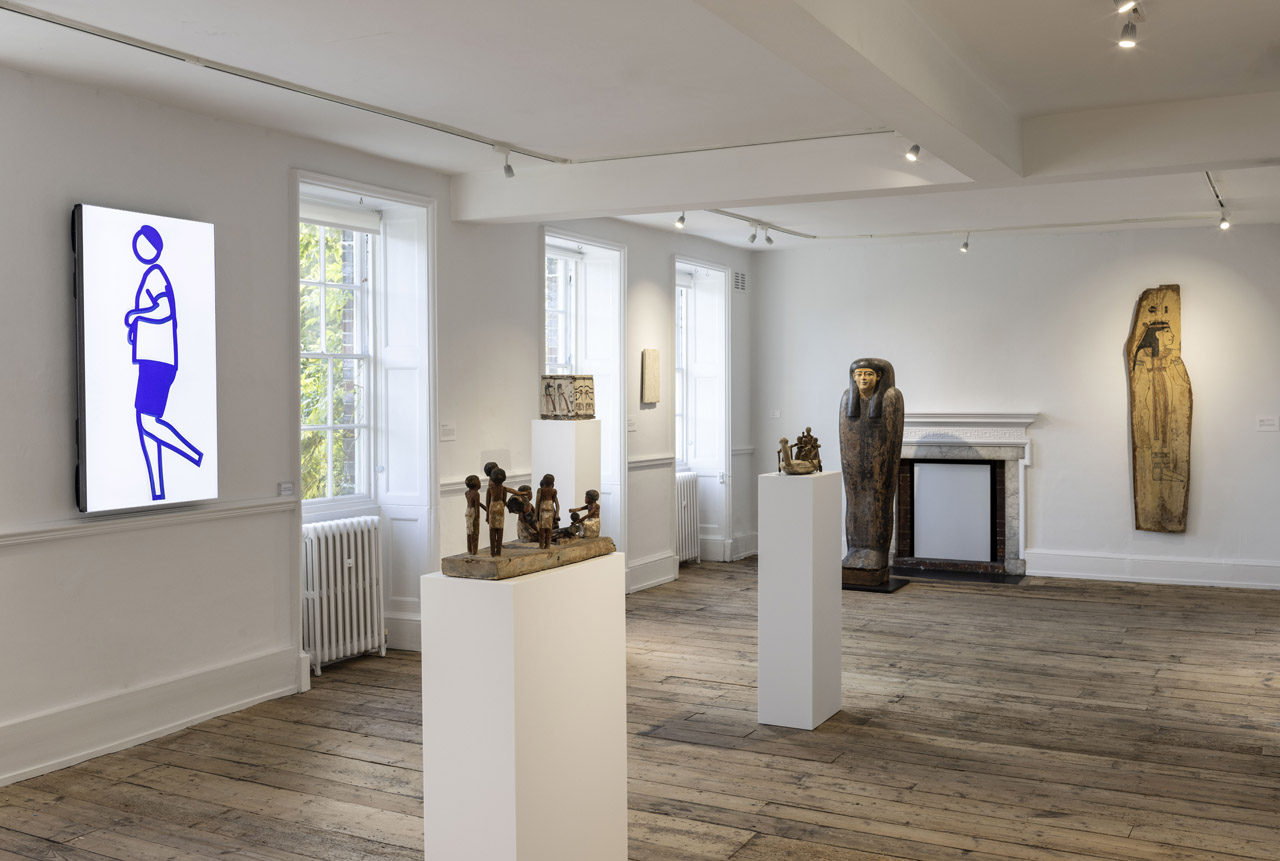 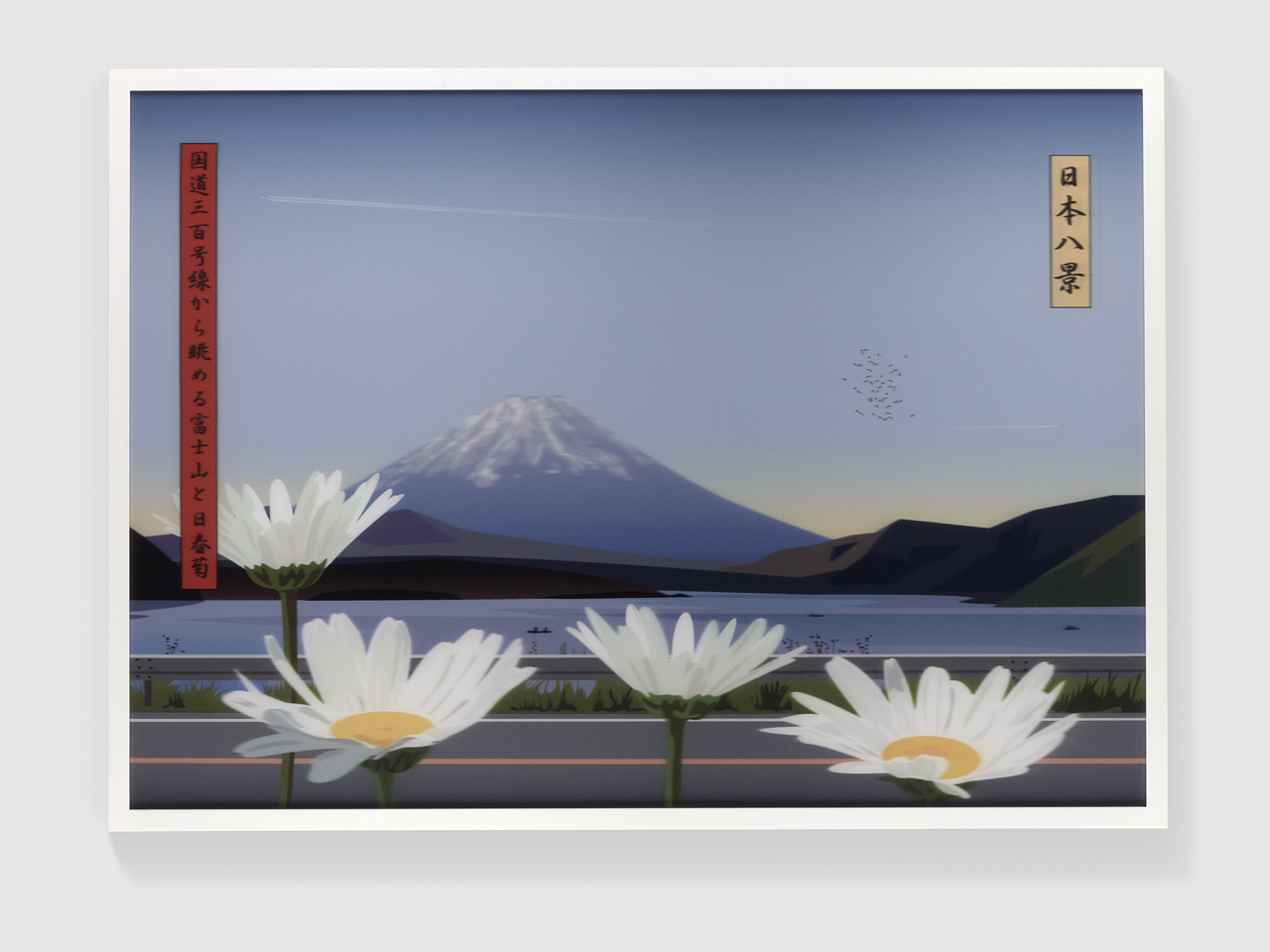 How do you find what you want in your collection?
I just follow my nose as I come across works at exhibitions and in art fairs. I read a lot of history and Google the stuff I have been reading then I’m like, oh my God, I can find the galleries that sell these items made in Sulawesi or in Sumeria in 6th century BC. You could argue you don’t actually need to buy these things and you don’t. But there is something about the commitment of buying something and the joy of living with it and looking at it every day and learning from it.

Do the exhibits inform the art you make yourself?
When you are stuck for ideas then just by looking at another person’s work it can provide you with inspiration to move forward. I maybe kid myself that it is part of the process of making art, but it is not a complete fantasy. It often feedbacks directly back into my own work and helps me find solutions.

So they provide a constant visual resource?
I think it is true to say that nearly all artists are not working in a void but in a story, or a many threaded story of works that have been made before. I respond to work I see, and get excited by other artists that are making works right now. I sometimes buy them to help me deal with the jealousy of what they have made. If you can’t beat them you join them, and you become part of their team of supporters and that feels good. It is partly learning. When I saw medieval helmets I don’t know why I was buying them, but it wasn’t really that I went out and made works that were reliant on what I had learnt by looking at them it was more that I could see in them something that I had not seen before. And then lo and behold, I am in The Wallace Collection in London and discover that Henry Moore used to look at the helmets there and all these multiple layers of connections just keep coming up. 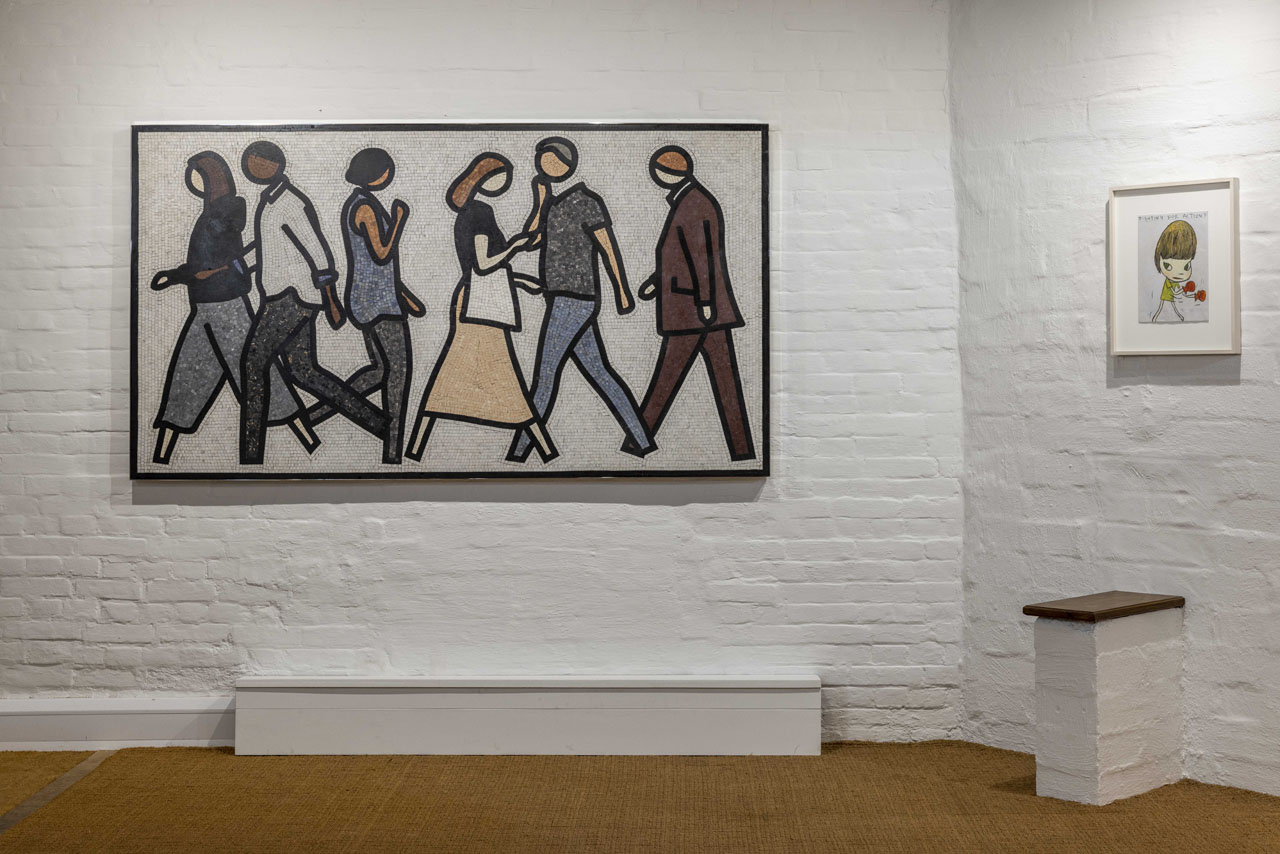 A core image in the exhibition is your painting of Ruth smoking alongside a similar looking work by the Japanese artist Utamaro. Did you have that work in mind?
Yes I did, that was a pretty direct desire to use the inventions that I saw Utamaro had such massive pictorial success with. When I make work I tend to start very literal and then drift but in this case I did take photographs of The Habit of Boisterousness by Utamaro and asked Ruth to take up those kind of poses. Why, I was doing that? I couldn’t actually tell but it made sense at the time.

Is there a need to pay homage to these artists and to showcase some of your major influences?
I don’t quite know what paying homage means other than really enjoying getting a lot out of them. I don’t kneel down and pray to them, I am not a hero worshipper, they were artists with lives and hopes and failures, but they did achieve these great things and it is great to own some of them and to bounce ideas back and forth. Some of the items I own were made 100,000s of years ago and obviously there is no discernable human connection there but it does feel like there is something enhancing even if they weren’t quite Homo sapiens. Like a hand axe made by Homo erectus people, it may appear wholly functional but we know they were made for other purposes. We will never know what that might have meant at the time but someone has made it and it has its own beauty and relationship to the world. 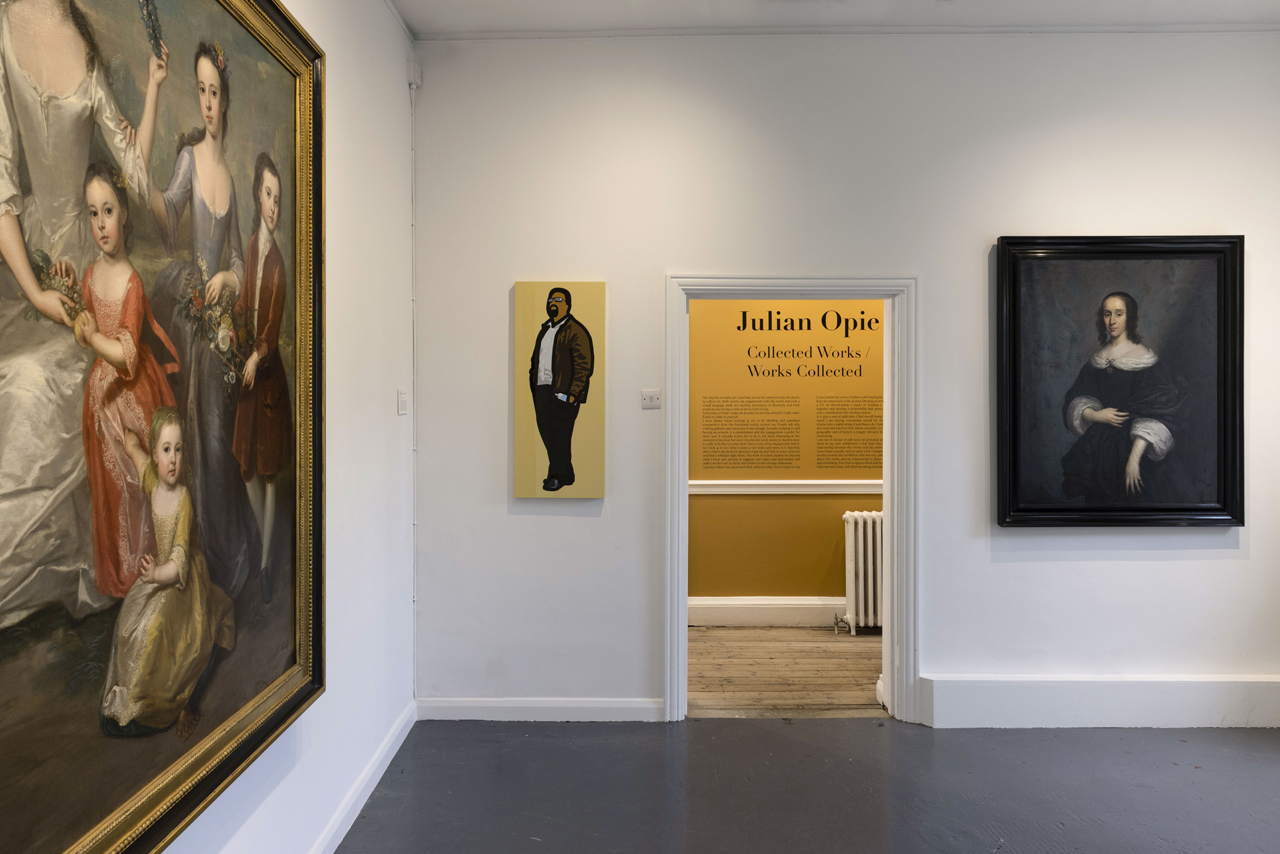 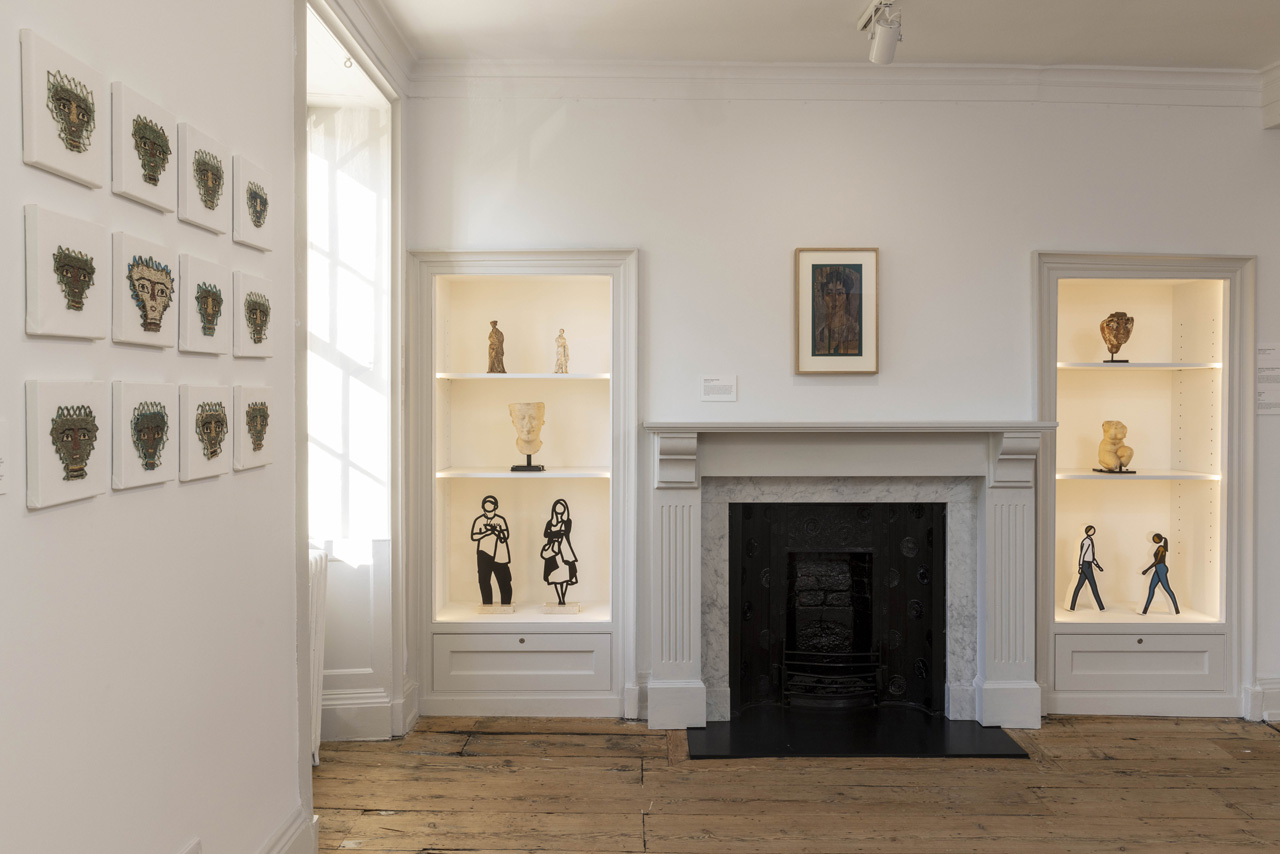 You also buy a wide–range of contemporary art like the artist Kara Walker who deals with America’s problematic past.
When I first saw Kara Walker I knew that alongside her focus on American history she was also referencing the history of silhouette portraiture and the silouettes of Auguste Edouart, who I have been collecting for years and is included in this exhibition. I responded to those silouette works she was doing immediately but she was also just making some amazing artworks which were a complete knock out. So buying a couple of works – only prints unfortunately they are very expensive – from a gallery I also show at seemed to make sense.

You live with these works directly in your home?
Yes I am sitting in a room now which is almost empty because it is all on show. I don’t really like my own work around too much as just by looking at it I am in the process of working. When I am home I like other people’s work around me and in the studio I like other people’s work to bounce off and expand the feeling of what I'm doing. It can feel a little onanistic to be surrounded by your own products.

You work on such a diverse range of materials and techniques how do you choose which one to use?
For me the decision on how and what technique to make things is the same as choosing what subject matter it is or what colour. I might want it to look like a Roman mosaic because I want it to have a sense of history. Or I want to make it out of acrylic plastic because I want it to look like a high street show sign because that makes the most sense for the subject matter. Each work has its own complicated recipe. 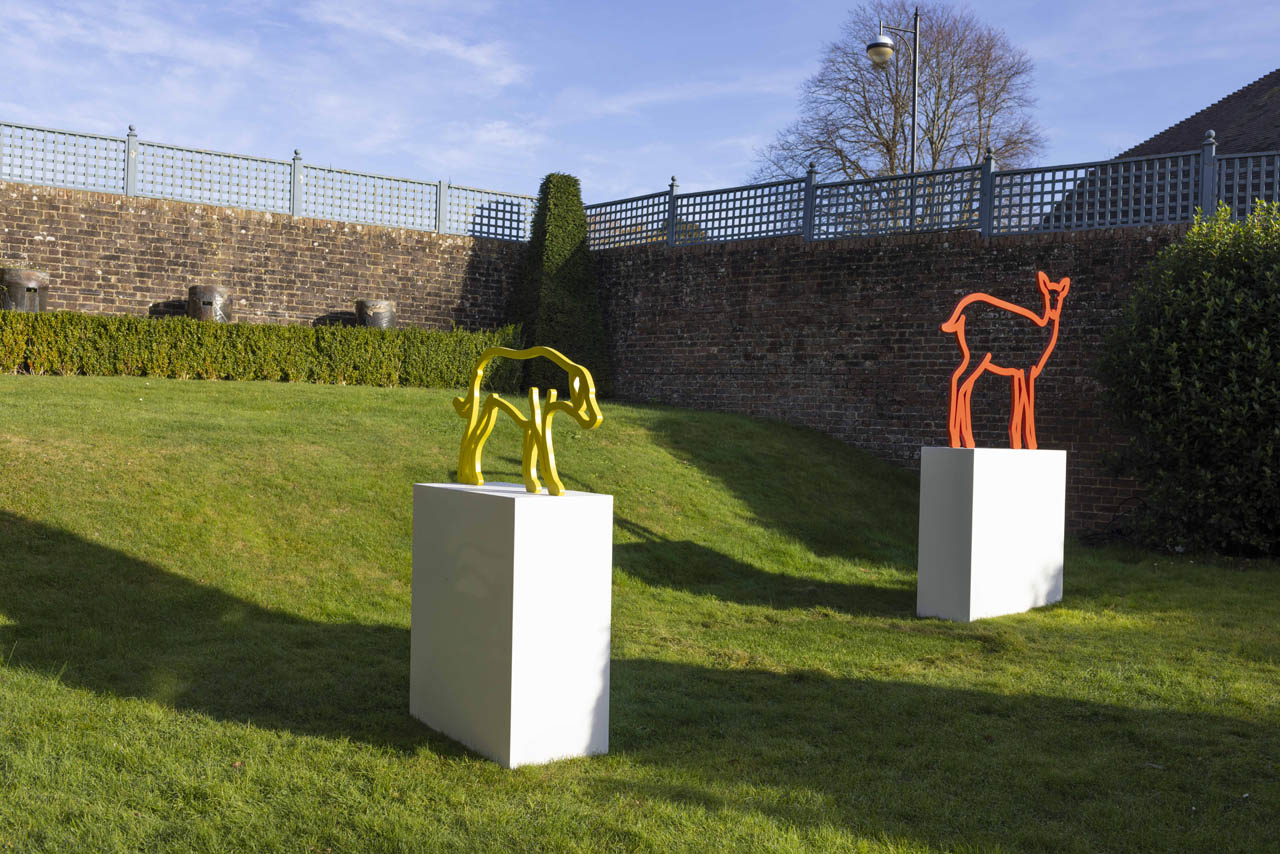 You approach work by reducing the features that distinguish individuals from each other to the bare minimum. With just a few lines your’re able to characterise what makes us unique and recognisable.
I am always adding and subtracting endlessly, floating ideas and seeing what works. Most of the stuff is of people, and I have drawn so many people I think that’s enough, but I can’t resist. Huge areas of the brain are set aside to recognize certain facial features, locking in to that human set of behavior is a very rich and also extremely over done. It is a constant challenge to make things new and different.

Where do you find inspiration?
This may sound a bit wet, but everybody looks amazing: when you’re on the underground and you look at the people sitting opposite you, each person is just fascinating and great to draw. A lot of them I can’t, I can’t draw fluffy scarfs or shapeless rucksacks but by a process of elimination I end up with the ones left that really work.