It is incredible to think that Pablo Picasso and Henri Matisse were both alive in France during the first half of the 20th-century. These two titans of modern art, who did so much to transform our sense of beauty, maintained an uneasy though respectful friendship through the decades. So when the older Matisse died in 1954, Picasso found himself struggling to cope with the sudden absence of his great rival. “Yes, he is dead.” Picasso said profoundly, “And I, I am continuing his paintings.”

In the immediate aftermath of Matisse’s death, Picasso did just that. Using Delacroix’s Women of Algiers as a template – a 19th-century French masterpiece depicting a sensuous eastern fantasy of harem life – Picasso created a dazzling commemoration for his rival. In a flurry of creativity between November 1954 to February 1955, Picasso made unabashed use of Matisse’s vibrant colors and signature motifs. Known as Les Femmes d’Alger (Women of Algiers) this series of 15 oil paintings, labeled from “A” to “O”, were last seen together over sixty years ago in Germany in 1955/56. Half a century later, more than half of those paintings (now scattered round the world), have been brought together at the Berggruen Museum’s latest exhibition, “Picasso and the Women of Algiers”. 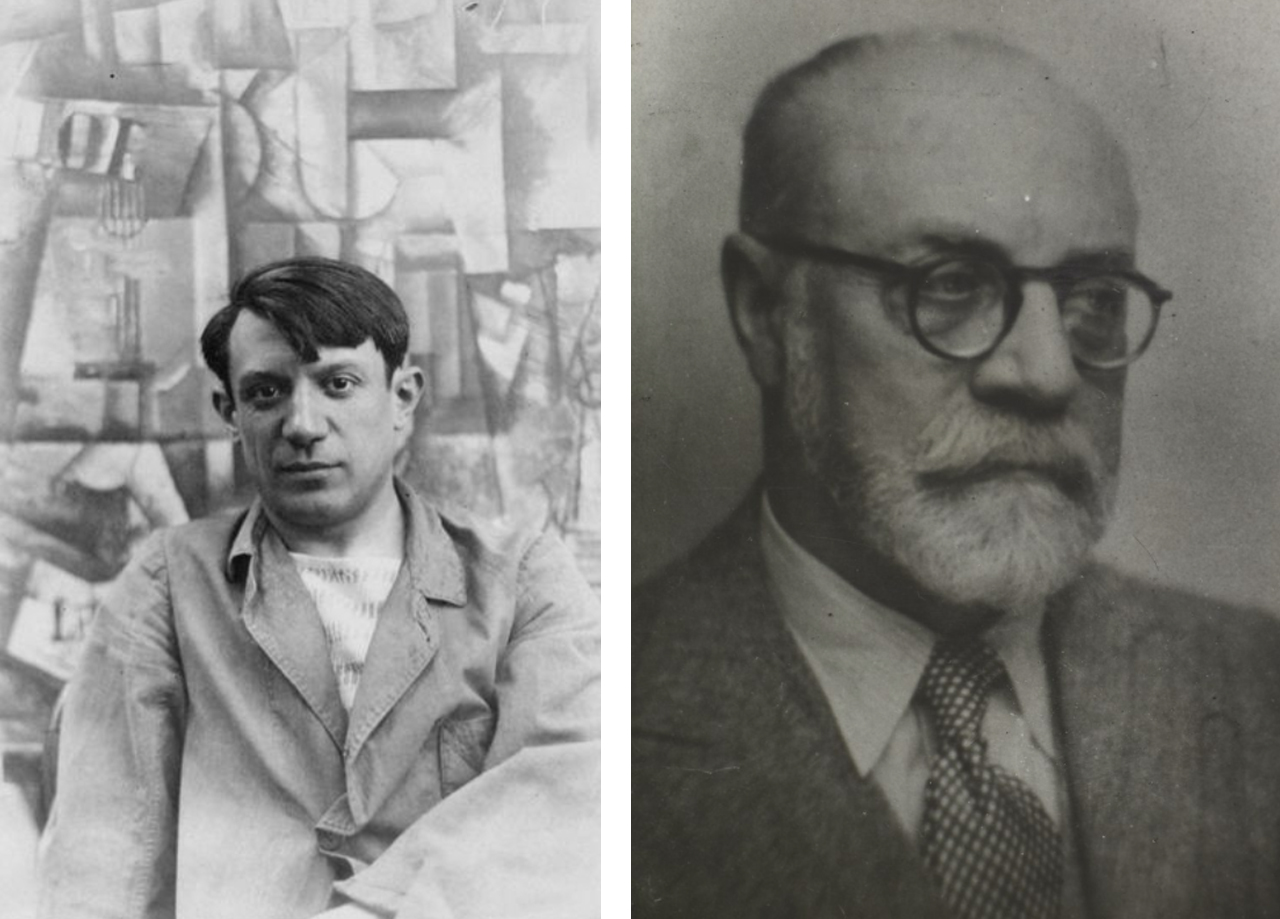 Mixing the free and the formal with the abstract and the figurative, what becomes clear throughout the series is the extraordinary depth of Picasso’s investigative processes – what he liked to term his “research”. Picasso, then on the cusp of his late period, demonstrated his ability to effortlessly appropriate from an historical genre while respectfully and in some cases playfully, imbuing it with new culturally charged elements. Making this series of 15 works appear less like a repeating motif and more of a vital discussion on the very possibilities of painting.

Changing compositions, adding figures then taking them away, how Picasso diverged from the original Delacroix painting he studied in the Louvre (a later Delacroix variation is exhibited), provides an unparalleled chance to see Picasso’s working practice. Despite the evident influence exerted by the work of Matisse, a third of the paintings are en grisaille, as Picasso reverted to his Cubist renouncement of color. The monochrome Version L (the only painting from the Berggruen collection and the only painting from the series in Europe) features just one woman with a hookah in hand. Enigmatic and sphinxlike, the figure is an intimidating and sexually powerful image of womanhood. The earlier Version K, was such a return to Cubism, that Picasso confided in his dealer: “My feeling is that nobody will like it any more.” 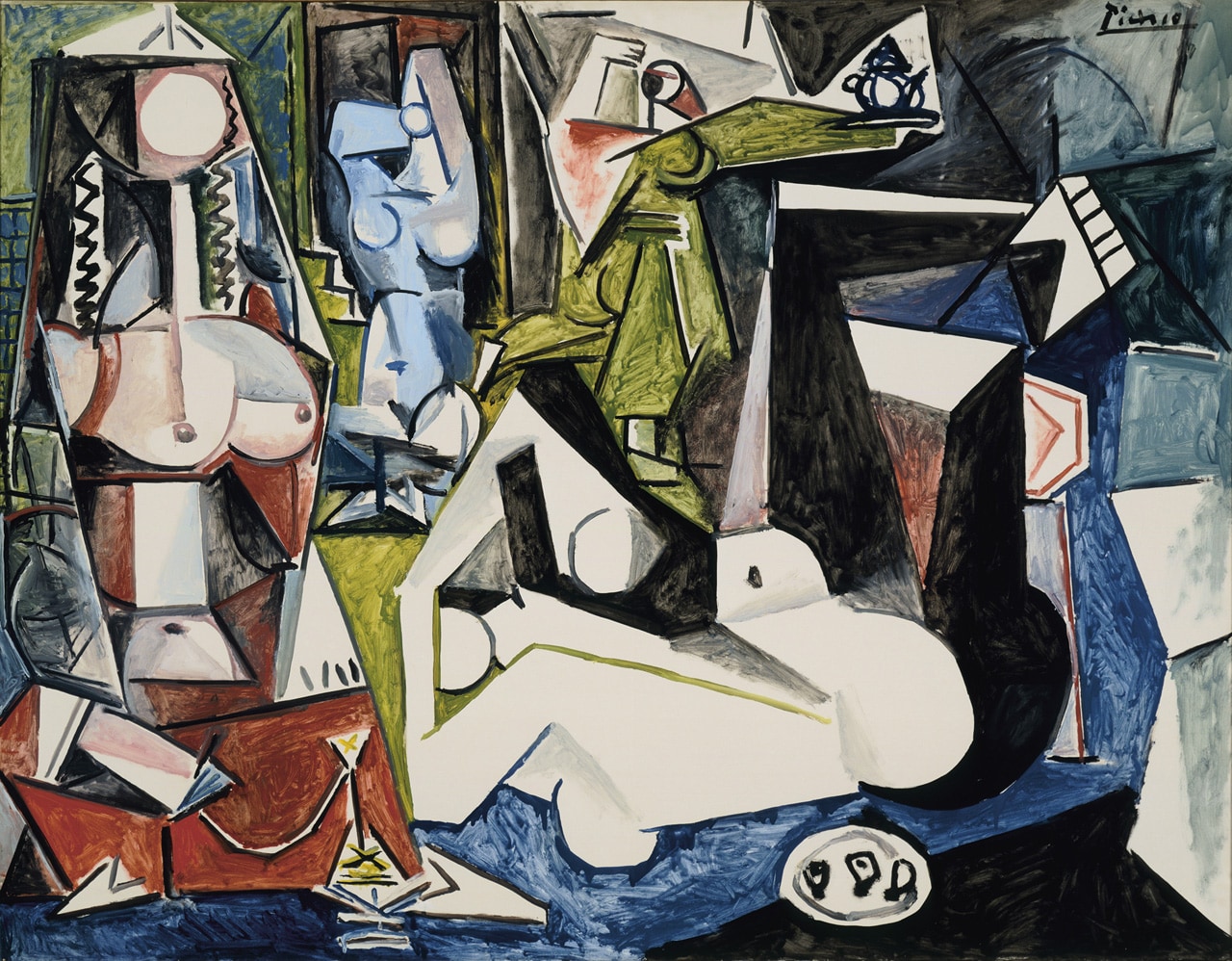 No such concerns would exist for Version O,(main picture) which was the last painting Picasso made in the series and forms the centrepiece of the exhibition. The critic, Jerry Saltz, has called it “an epic master class on the ways of painting, art history, color, structure, and form.” Picasso, then aged 73, had fallen deeply in love with Jacqueline Roque 45 years his junior. Her long, elegant neck and face can be seen in the most figuratively rendered woman in the whole series. With her billowing headdress and corseted breasts, this Queen of Hearts is an incongruous presence in the harem. A stately figure that anchors the fractured abstract world that pours out of her and flows into the rest of the canvas.

This extraordinary painting, bought at auction for $179.4 million by the former Qatari prime minister, Hamad bin Jassim bin Jaber Al Thani in 2015, is also where Picasso’s mourning reaches its apex. For Gabriel Montua, the curator of the exhibition, Version O should be understood as a “Herculean effort by Picasso to put an end to his grief over Matisse’s death.” With its mixture of forms and genres, the work is a visual summation of Picasso’s own art history. But in the faceless odalisque reclining across the bottom of the painting, that neither quite faces up or down, lies Picasso’s final response to Matisse’s own revolutionary Blue Nude. Picasso's own kaleidoscopic onslaught of fragmented colour. 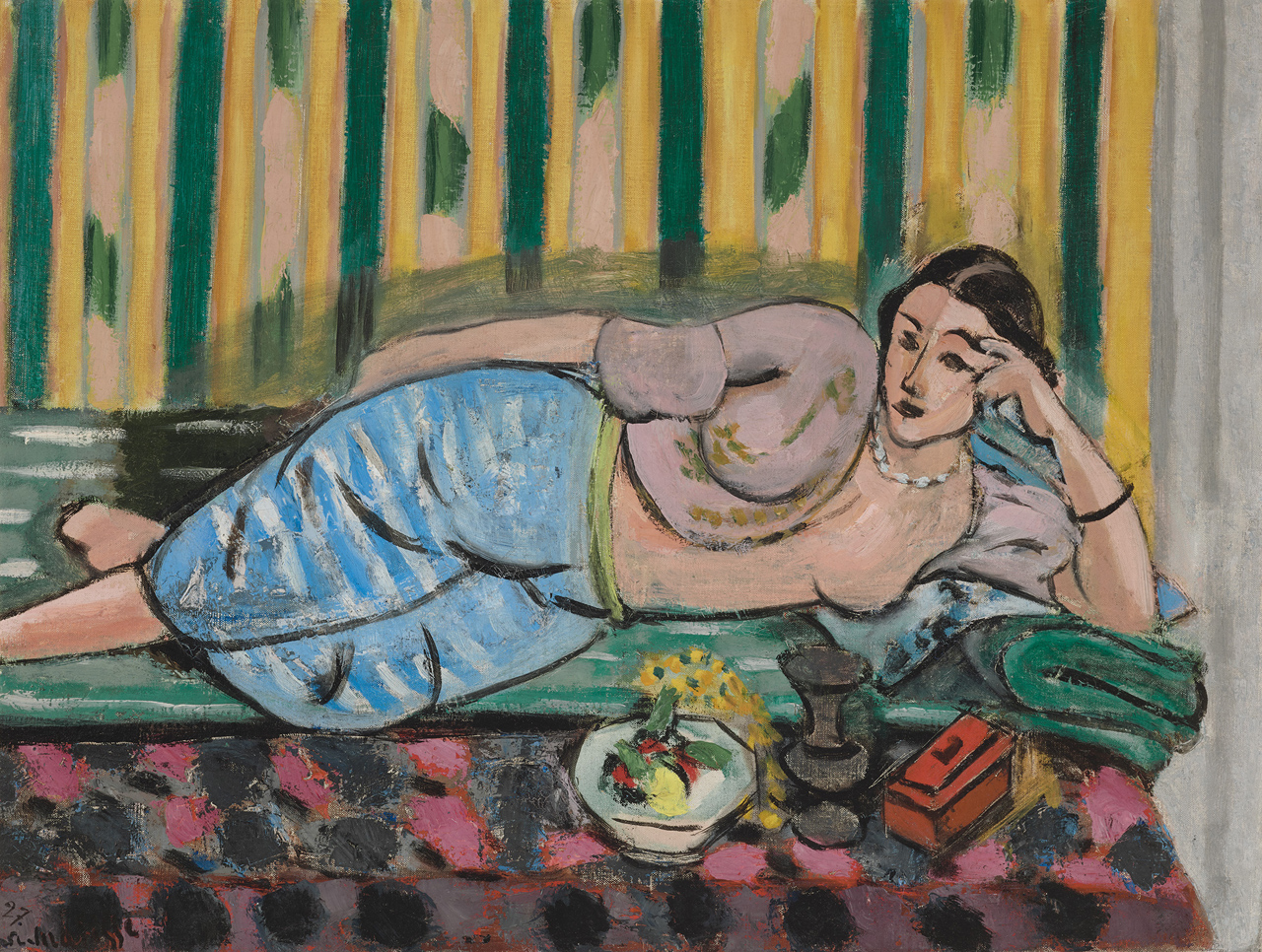 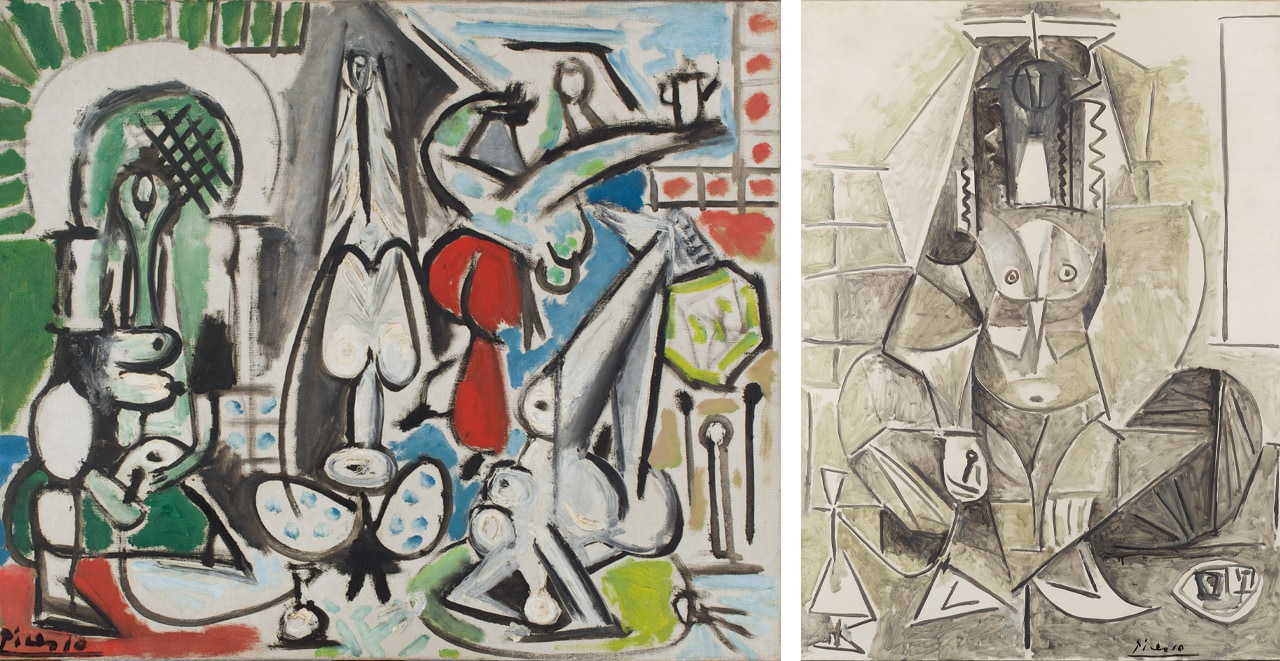 Fortunately the exhibition features two Matisse’s odalisques which provide an unprecedented chance to get close up and see how Picasso absorbed the work of the other virtuoso. In fact the entire show is supplemented with paintings, studies and graphics; even tracing the provenance of the 15 paintings with photographs of Victor and Sally Ganz’s surprisingly modest sitting room. These American collectors bought all the works in the series (a condition of the sale) for $212,500 in 1956, before quickly selling off 10 and keeping their 5 favorites.

As you would expect from an exhibition of this kind, a post-colonialism perspective is provided alongside a feminist one – a necessary step when taking into account the predominance of the male viewer and the suggestion of sexually available women in a harem. Perhaps even more so when taking into account Picasso’s relationship with women, a subject that has been hotly debated since the 1960s. Somewhat surprisingly, the Algerian French writer, Assia Djebar, saw Picasso as liberating the women from Delacroix’s painterly prison. Seeing Picasso’s series as a “glorious liberation of space”, allowing the voiceless Muslim women to “burst out” of the harem. It is a reading – as the significant notes to the exhibition bear out – that reveal the dramatic contradictions, tensions and layers that pulsate through these canvases. A vibrancy and problematic complexity, that reaches as deep as anything else in the western art canon. From a man who has become the very definition of genius and originality in the 20th century. 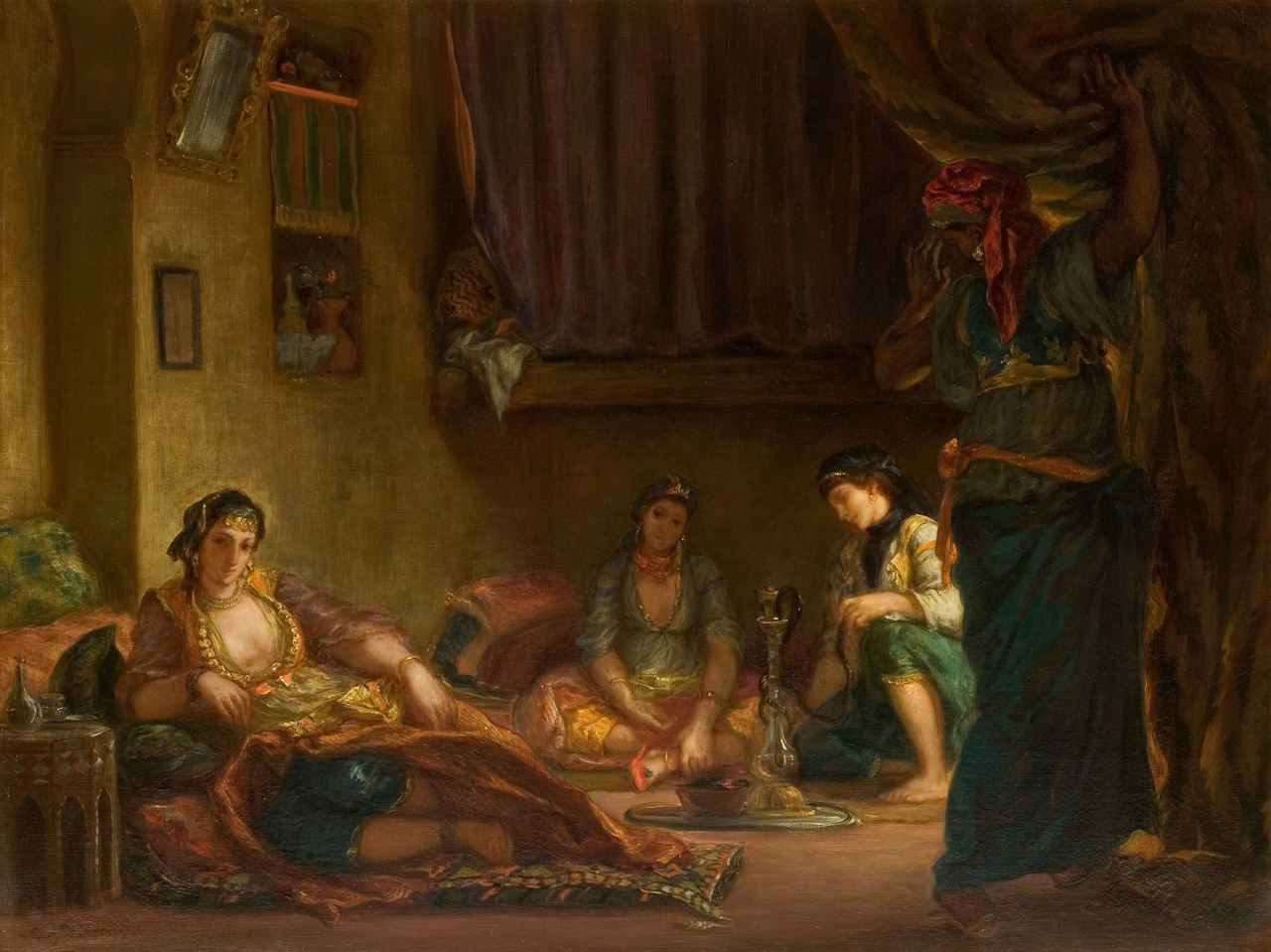