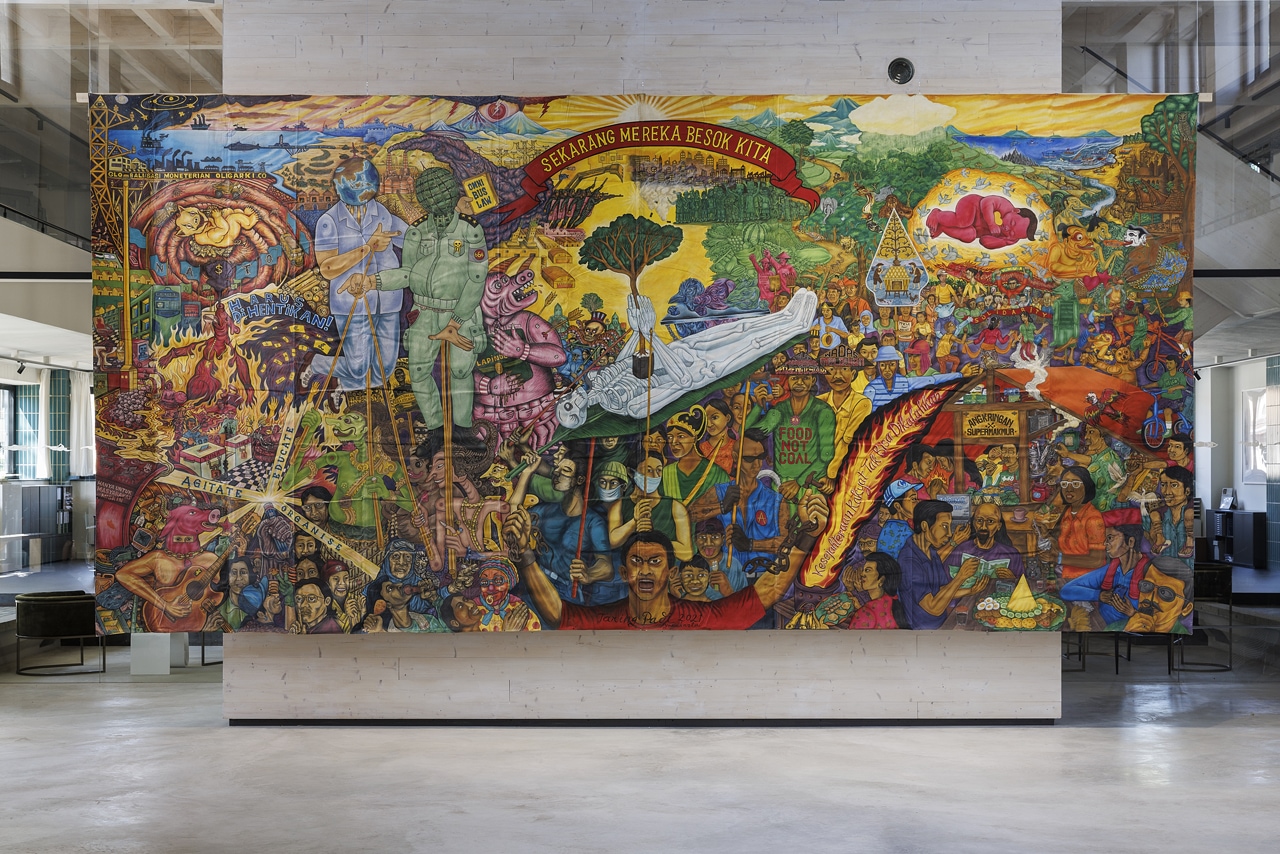 Hallenbad Ost, Taring Padi, Kassel 2022. This is not the People's Justice banner. Image: Frank Sperling
Curator's Choice — One month ago

Just before the opening of documenta on the 18th of June, a caricature of an Orthodox Jew, with sidelocks, blood-red eyes and wearing a black hat with the initials “SS,” the acronym for an Nazi paramilitary organisation, appeared on a sprawling banner in a prominent position in Kassel’s Friederichsplatz. As bad as that may sound, it is only the latest in a series of misjudgments by the curators, Ruangrupa, an Indonesian artist collective, who either failed to realise, or worse, comprehend the implications of exhibiting anti-semitic stereotypes of this kind. Let alone exhibiting them in Germany.

The artist group behind People’s Choice, 2002, the Indonesian, Taring Padi collective, were quick to deny any links to antisemitism and in no time at all the work was first covered up then hastily dismantled. Yet the damage had been done, and documenta, the world’s most important contemporary art exhibition, had become completely engulfed in the scandal. More worryingly, Claudia Roth, the Germany’s culture minister, has now announced plans to reform the governance of the exhibition, citing plans to make federal funds contingent on a “mandatory” greater influence from the government. 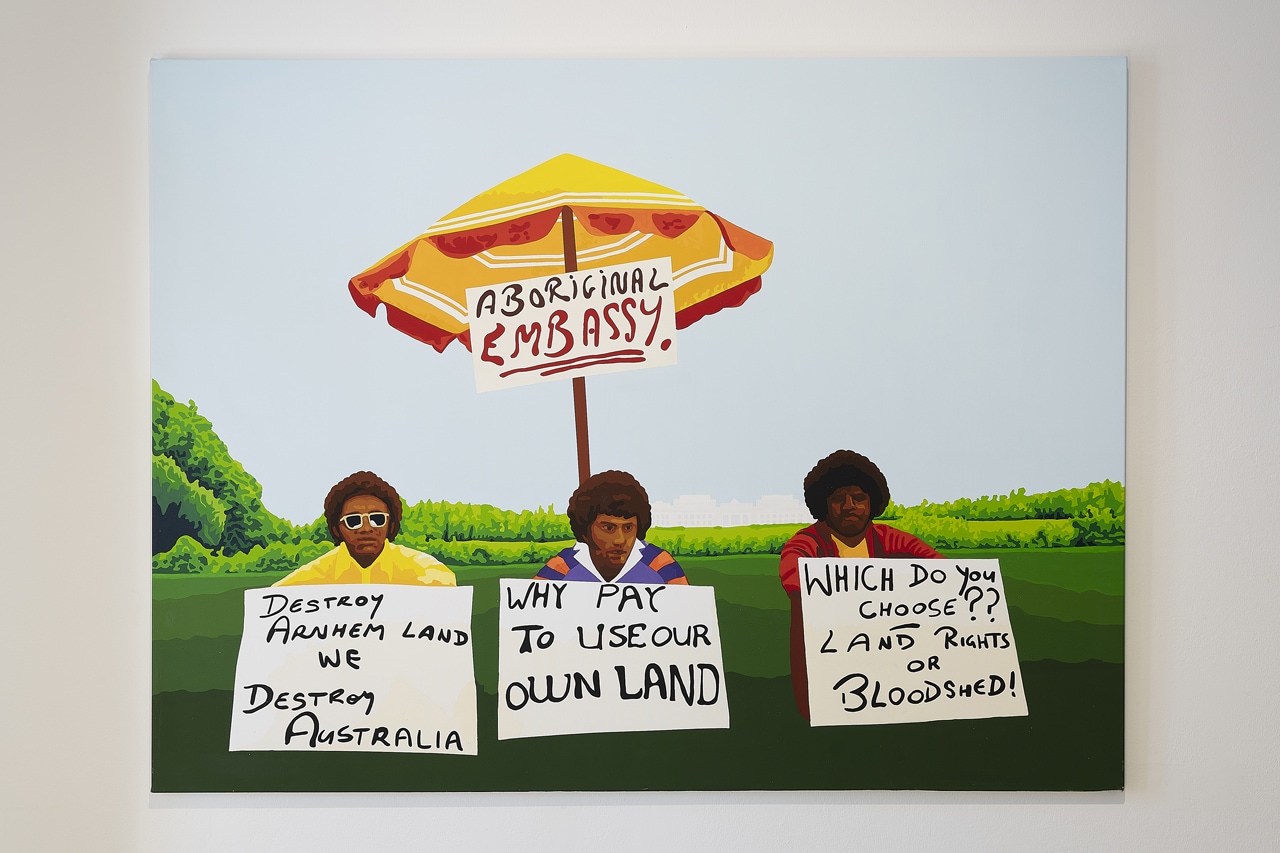 A tide of apologetic statements have since been released and the director general of documenta, Sabine Schormann, who so far has avoided being ousted despite calls for her dismissal from a number of Jewish groups, admitted to failing to “keep a promise” that “there would be no anti-semitic content at documenta 15”. The problem, is that this has happened before. A month earlier, on May 7th, rooms in the exhibition where a Palestinian artist collective called The Question of Funding were set to exhibit were vandalized with the graffiti, “Peralta” a possible reference to Isabel Peralta, a Spanish far-right and neo-Nazi youth leader and the number “187” a well used graffiti symbol that sometimes carries the connotation of a death threat.

Back then, Ruangrupa had dismissed the attack as being politically motivated and refused “to accept attempts to delegitimize artists and preventively censor them on the basis of their ethnic heritage and presumed political positions.” Why couldn’t they show pro-Palestinian and pro-BDS artists, especially when their work gives a timeline about the issues of finding space under the broken infrastructure of Israeli occupation? But Ruangrupa’s forthright position has perhaps exasperated the current situation. Which they now blame on disrupted preparation time as a result of the pandemic. That is of course understandable, with as many as 1,500 artists and with 32 venues dotted around the city – it would not have been simple task to keep in control of everything. 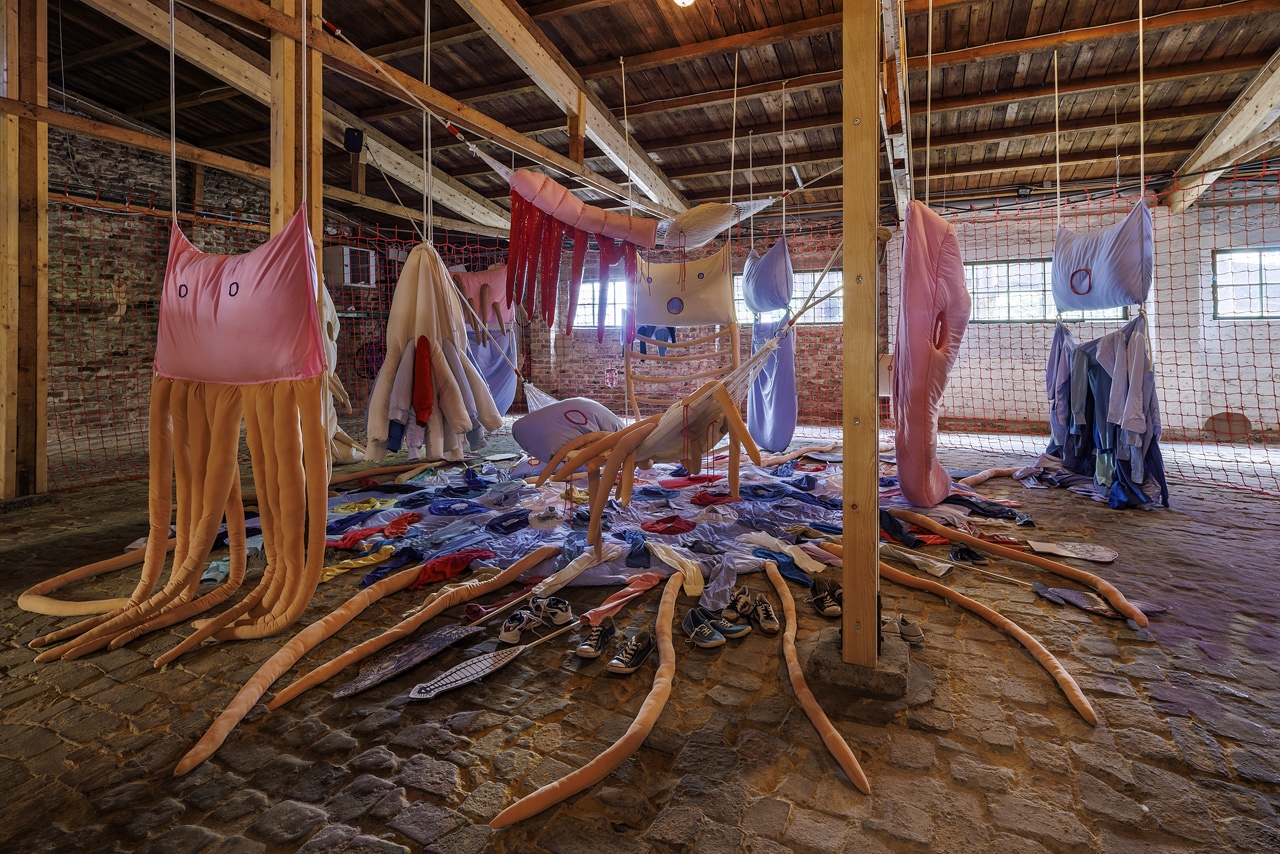 Excuses aside, showing People’s Justice, should not result in a blanket condemnation of the entire documenta 15 which on the whole is extremely worthwhile and enlivening. Under the guiding principle of “Lumbung,” an Indonesian concept based on the sharing of rice where surplus harvest is stored and distributed communally for the benefit of all, the exhibition is lively, urgent, colourful, highly politicised, upbeat, rough around the edges, frequently surprising and wholly edifying.

Ruangrupa, a group that emerged in Indonesia following the end of the dictator, Suharto’s regime in 1998, were focused on creating a “globally oriented, collaborative and interdisciplinary art and culture platform that will remain effective beyond the 100 days” of its existence. Eschewing the typical overarching curator figure, they have opted instead for a more nebulous, open structure, a decentralized approach that puts faith in the collective genius of the artist groups taking part, allowing their instincts, and knowledge to lead the way. Indeed, the exhibition is brimming with alternative solutions to complex issues of economy, globalism, and climate change. At the entrance of the Friedericanium (just before the position of the now dismantled banner), the first work you see is a tent claiming to be the embassy of Australian Aboriginal people. A reference to the now famous Aboriginal Tent Embassy of 1972, established on the parliamentary lawns in Canberra to challenge the status of Aboriginal people in Australia. 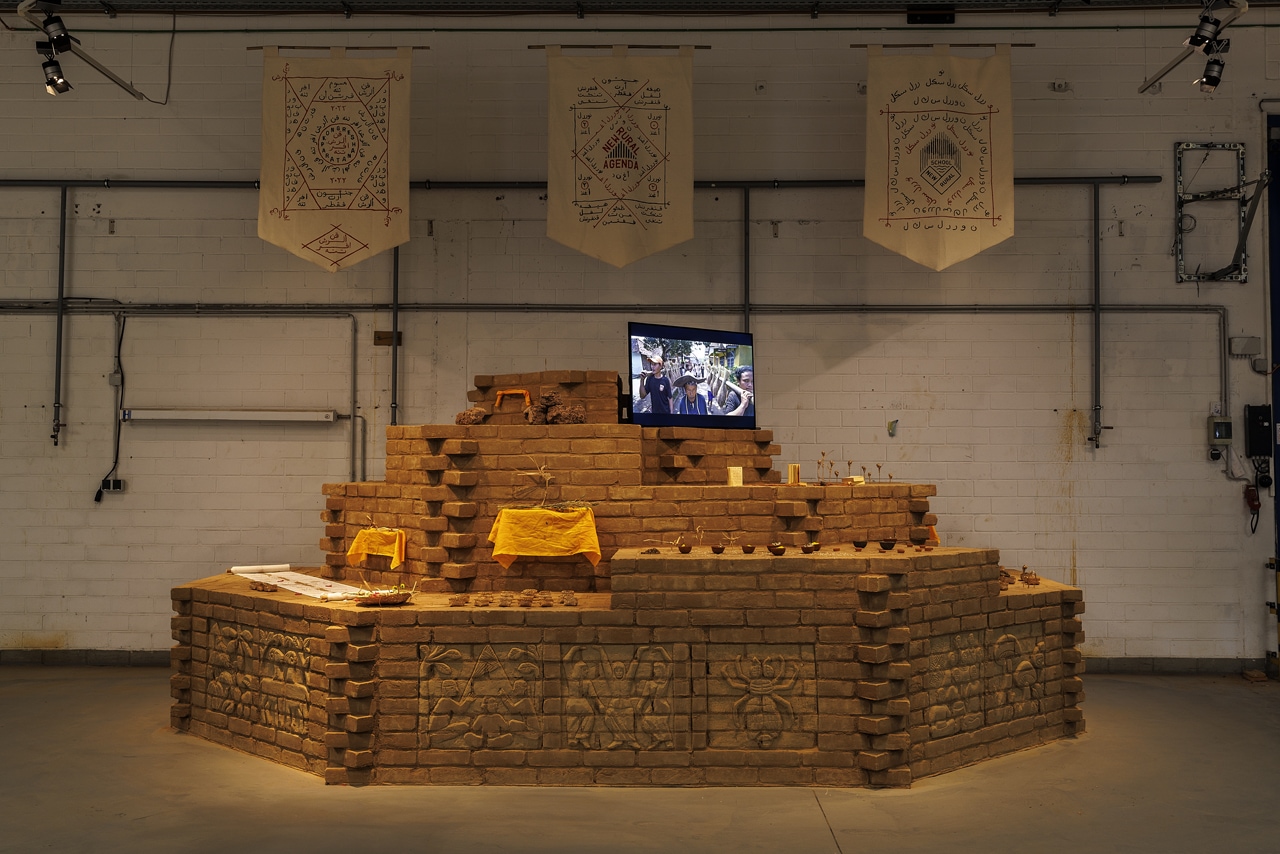 Inside the Fridericanum, many of the rooms are workshop like environments, filled with videos of artists discussing what Lumbung entails and everywhere you go an exhaustive amount of words. On pamphlets and on labels, most of which are so positioned so low down you have to crouch down on your knees to read them. Downstairs there’s even a creche for people to drop off their children. It is considered, and open and you can feel the amount of time that has gone into making decisions, the weight of consensus and collective decision making – all the participants got an equal share of the production budget, as well as an additional reserve which the ‘lumbung members’ could use for collaborative projects.

With a focus on artists from the Global South, the featured artists provide a necessary reminder to Western audiences of the different conditions for art and cultural life outside the conurbations of Europe and America. A walk-in installation in the Orangerie made out of waste by the “The Nest Collective“ from Kenya, highlights how rubbish, electronic waste and textiles are transported to the countries of the Global South, where they contribute to the destruction of the environment and the economy. 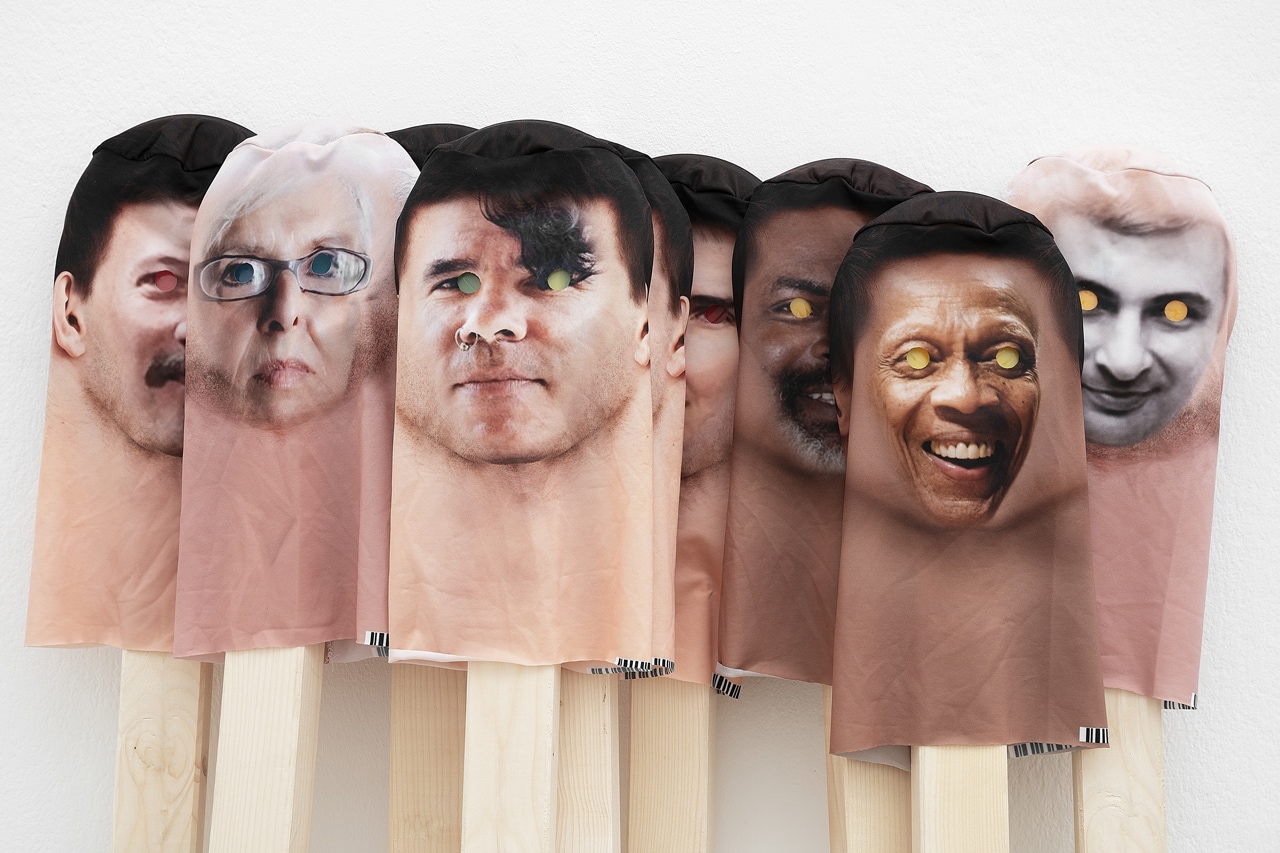 At the Documenta Halle, that can only be entered through a dilapidapted corridor of rusted corrugated-iron, like something you’d see in a shanty town. Mugshots of Cuban artists and intellectuals censored by government institutions between 1959 and the present are presented in a wooden constructed room modelled on a Stasi prison. Revealing all those that have been detained and imprisoned on fabricated crimes. A few of the exhibitors have themselves been deemed “non-artists” by the Cuban state and effectively exiled. In the same Halle there is a skateboard halfpipe and printing press that’s open to everybody.

A little further on there is a floating stage on the Fulda River and a wonderfully dreamy piece by Eva Kotatkova, a ghetto, a goth rock opera. The Berlin art collective ZK/U, Center for Art and Urbanistics has built a boat out of an old wooden gable roof that will sail from Berlin to Kassel along Germany's waterways in a journey that will take 60 days. Of course this is just skimming the surface of what’s going on, there is a gigantic festival program of talks, stage performances, food nights, community events and a multitude of other venues to see.

The Taring Padi banner was a mistake. A dreadful one. But it always going to be complicated when entrusting the show to a collective, who invited other collectives, who in turn invited other collectives – almost all of whom have nothing to do with these allegations. documenta is renowned as an exhibition for the slow burn of its critical legacy and once the furor around these allegations dies down, it will be a chance to appreciate this radically diffuse, and frequently enriching exhibition.