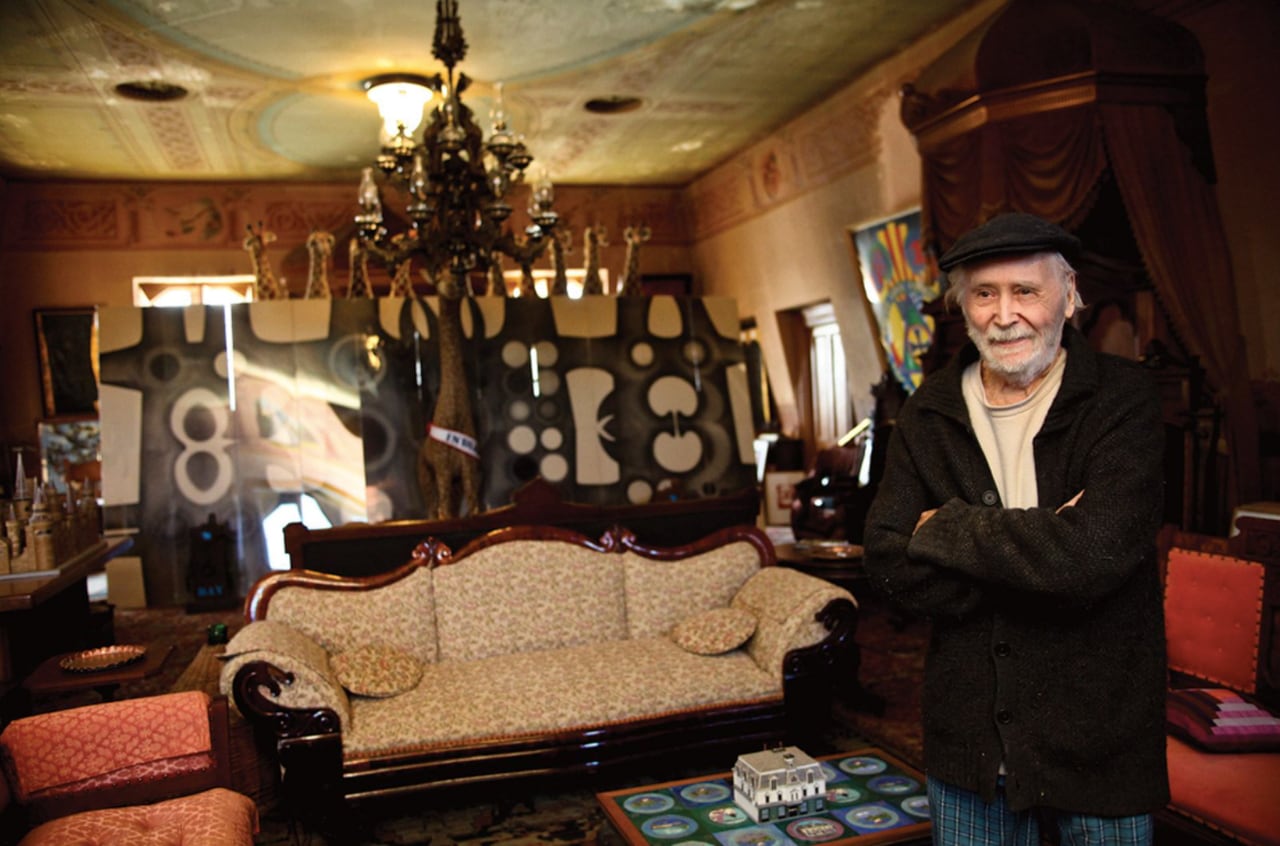 Robert Indiana at his home in Maine. Image: © Joel Greenberg
News — 1 year ago

With its slanted O and bright flat planes of colour, LOVE is one of the most visually-charged works in the western art canon. An artwork so ubiquitous and potent that it has come to define an entire era, acting as a beacon of positive ideology and countercultural rebellion. First appearing on a card in the early 1960s, it is now emblazoned on everything from coffee mugs to carpets, on posters in student bedrooms and carved out of solid marble slabs. Its simple, universal message has become a globalised symbol, and its monolithic, sculptural form has encircled the world, standing in cities as diverse as Berlin, Jerusalem and Washington D.C..

Robert Indiana could never have imagined the impact his artwork would have on the world, or the high price he would pay for the artwork’s success. Having left it too late to properly copyright the work, the market was flooded with cheap LOVE rip-offs, such as rings and aluminium paperweights. He was even labelled a sell-out and lambasted by critics, when in fact he was making no financial gain from the myriad items that were then appearing. “Rip-offs have done a great harm to my own reputation,” he said once in an interview with the New York Times, as he admitted to be being increasingly haunted by the artwork’s runaway success. “I am a father to a bad child. It bit me.” His ambivalence stemming from his belief that the work had starved him of critical attention and overshadowed all his other contributions.

By 1978 he had had enough. With the contract up on his studio, he packed up his things and left New York for good, moving to one of the remotest places in America, Vinalhaven, a small island off the coast of Maine only accessible by ferry or plane. It was a surprising move for an artist, who, alongside Andy Warhol, was firmly established at the vanguard of the Pop art movement. He and Warhol had often exhibited and worked together – Warhol’s first film work was a slow-motion and mind-numbingly long film of Robert Indiana eating a mushroom. 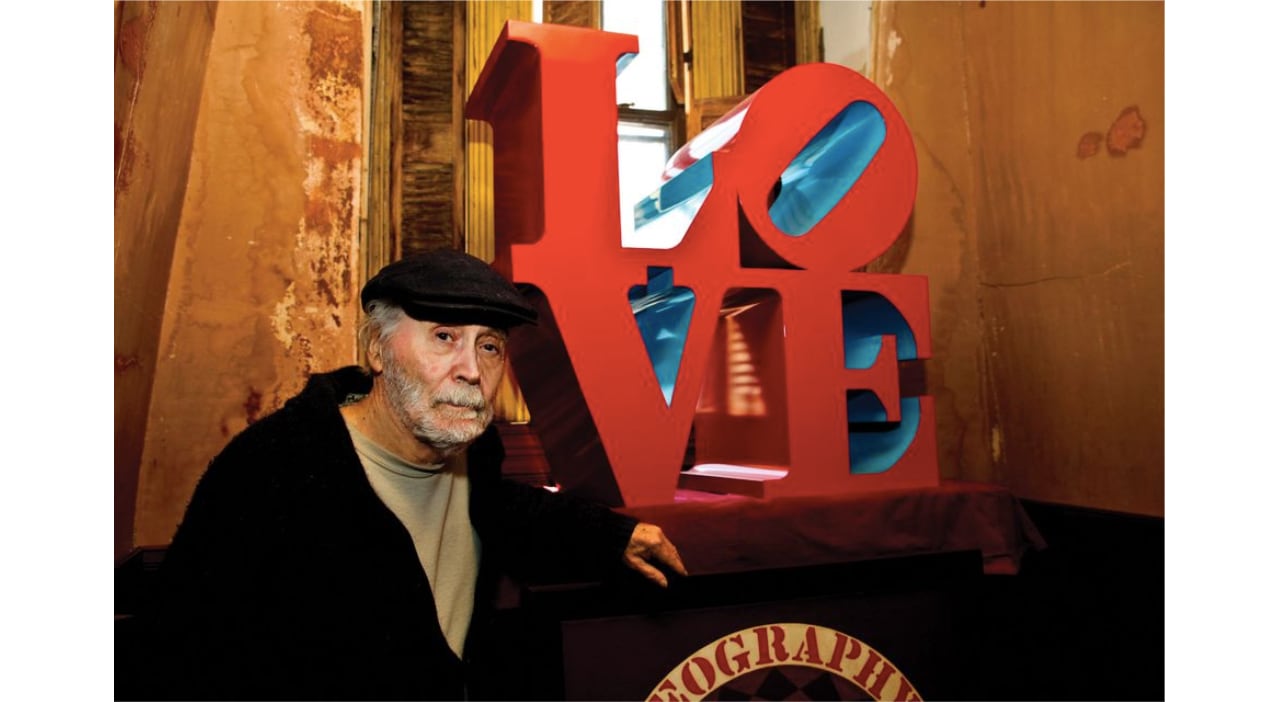 But despite Indiana’s prominence on the New York scene, he had none of Warhol’s gifts for self-publicity, shying away from the decadence and personality cults that centred around the Factory. More personal and intimate, Indiana’s art drew less from contemporary consumer culture and more from his strained and peripatetic childhood: “I lived in 21 different houses before I was 19 years old,” he once noted. The colours and shapes of his artworks were not just taken from iconic advertising but from meaningful and symbolic events in his own life, often so obscure they were all but lost on his audience.

When he was commissioned to produce a 4-meter illuminated “EAT” sign for the New York State Pavilion at the World’s Fair in Queens, he chose the word in reference to his mother’s job working at a roadside diner. It was also the very last word she ever spoke to him, “Did you have something to eat?” This of course meant little to the thousands of people who congregated around the familiar café sign in the mistaken belief that it was a restaurant – as usual, his use of dazzling, bold, hard-edged surfaces had overshadowed the conceptually challenging subtext. It would not be the first time his work was misinterpreted.

It was the Museum of Modern Art who had first commissioned Indiana to make a LOVE Christmas card having seen some cards he had made for his friends using single words in serif capital letters. Some critics attribute that first design as a tribute to a recently ended love affair with the artist Ellsworth Kelly. The bold, blood red capital letters against planes of blue and green, were unequivocally the colours used by Kelly. Colours that he so often applied in many of his most recognisable paintings. However, Indiana always claimed that he was inspired by the company logo of Phillips 66, the gasoline company where his father worked: “It was absolutely beautiful. I would be in the car and I’d see that red-and-green sign against the blue Indiana sky.”

The more personal Indiana’s original inspiration, the more heartfelt it made his relentless pursuit to reclaim it. Right at the peak of LOVE’s popularity in the 1970s, Indiana began a campaign of photographing himself beside this artworks to remind the public of their creator: “Everybody knows my LOVE, but they don’t have the slightest idea what I look like”, he said in 1976. That legacy of possession and ownership has even continued after his death in 2018. Lasting two and half years and incurring over $8 million in legal costs, the lawsuit between the artist’s estate, his long-time representative, Jamie L. Thomas, and the Morgan Art Foundation has become one of the most convoluted and complex in recent art history. Then last week news came through that a resolution has been found that will finally “seek to have all pending lawsuits and counterclaims related to the estate dismissed.”

What cannot be doubted, is that Indiana’s LOVE burns with the same burning intensity as it did the day it was first made. It encapsulated the spirit of a truly optimistic age, later becoming commercialised and plagiarised, encapsulating the consumer age that followed. Despite its problematic relationship with its creator, LOVE continues to transcend borders and hit the heart like few other artworks in modern history.