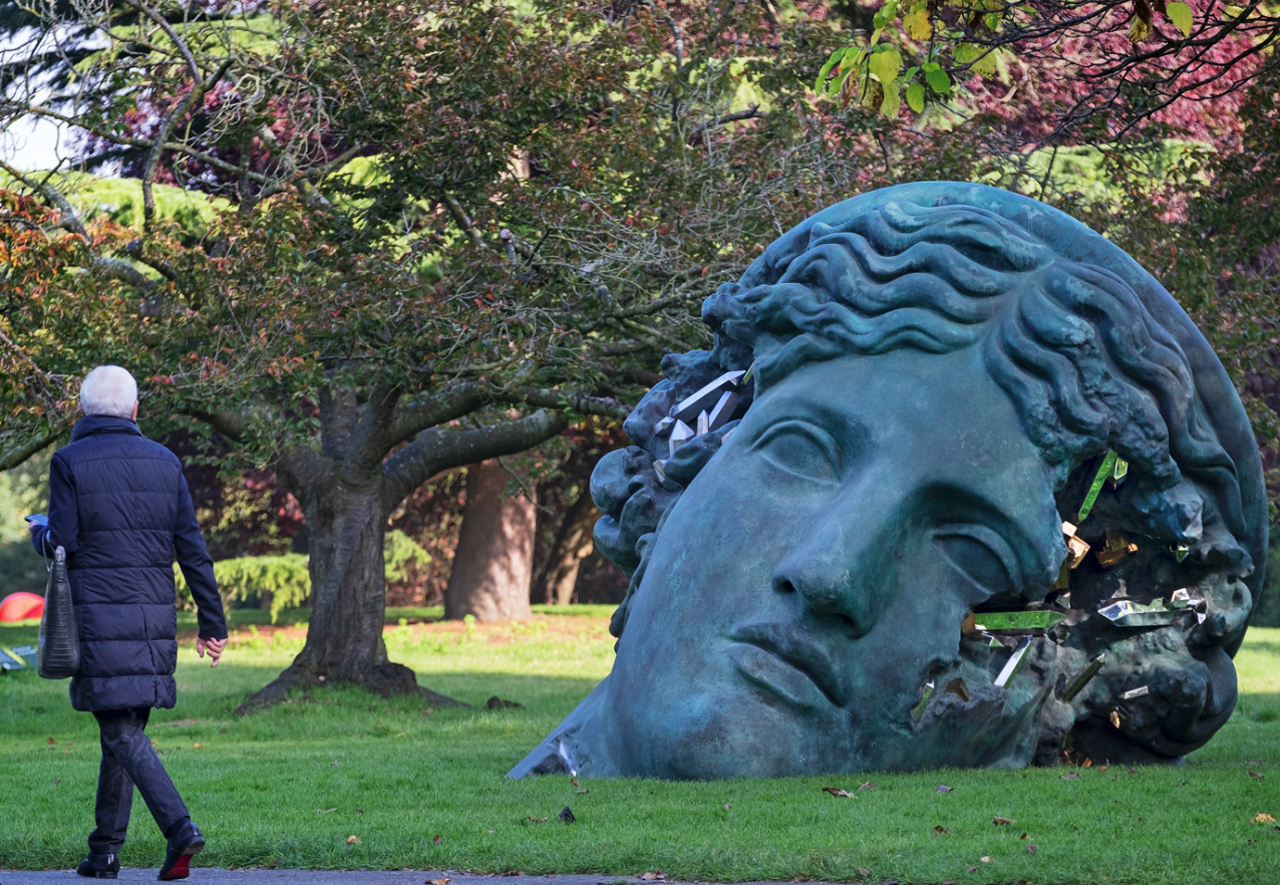 After a year of postponements and cancellations, dealers and collectors have suddenly found themselves having to contend with three major art fairs in the space of a single month. First up was Art Basel in late September, followed by London’s Frieze in mid-October, which finishes just before the begining of the still ongoing Paris’ FIAC art fair. Dealers who would normally travel to all three, are either being forced to choose between the fairs or commit to a dense period of international travel.

Pre-coronavirus, it was well documented that many galleries received a large proportion of their yearly income from art fair sales. That dependence is unlikely to change in the post-pandemic world. But the sheer speed with which the art world has returned to its pre-covid schedule has not been met with enthusiasm by all dealers who also fear a return to the punishing travel demands. 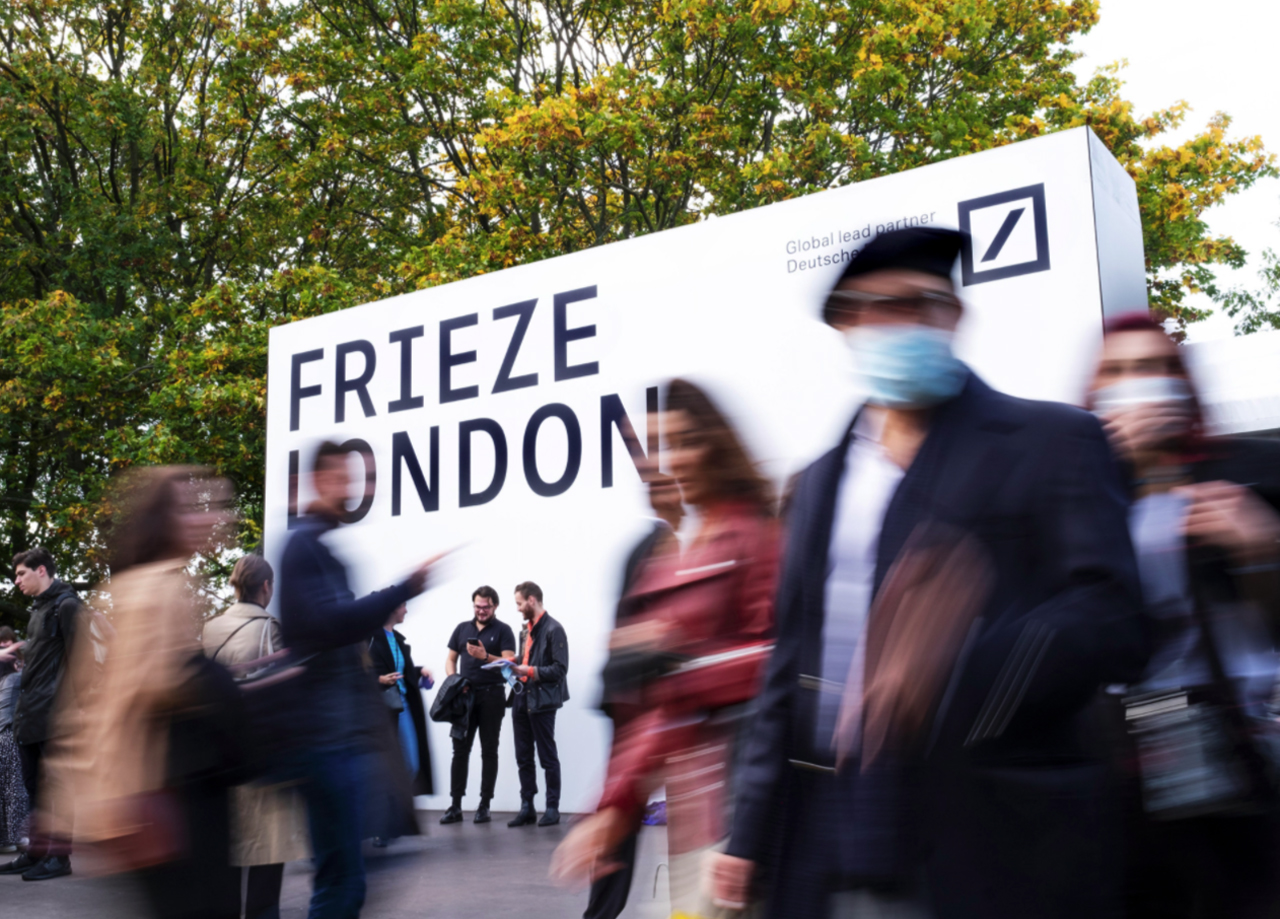 Such considerations are ridiculed by the Paris-based dealer, Emmanuel Perrotin, who sees fairs like Art Basel as being of far greater importance to his gallery than simply making money. “We do art fairs to give a voice to our artists and to introduce new artists to collectors and curators.” He said to the Art Newspaper, “Some dealers complain; I say to them you don’t need to participate any more! If people want to do fewer fairs, there are always people who will take their place.”

In London, there was a palpable sense of excitement in Regent’s Park at the reopening of Frieze on the 13th October. The London art community has had to face one of the severest outbreaks of Corona in Western Europe so the return of the fair's sprawling sculpture park was particularly welcome and was notable for its arresting multicoloured glass work by Carlos Cruz-Diez and a figurative work by Daniel Arsham (main picture).

Just fifteen-minutes walk across the park and with the strapline, “Six millenia of art”, lies the impressive Frieze Masters. There you can buy everything from ancient Roman artefacts, a Matisse still life to art from the late 20th century. 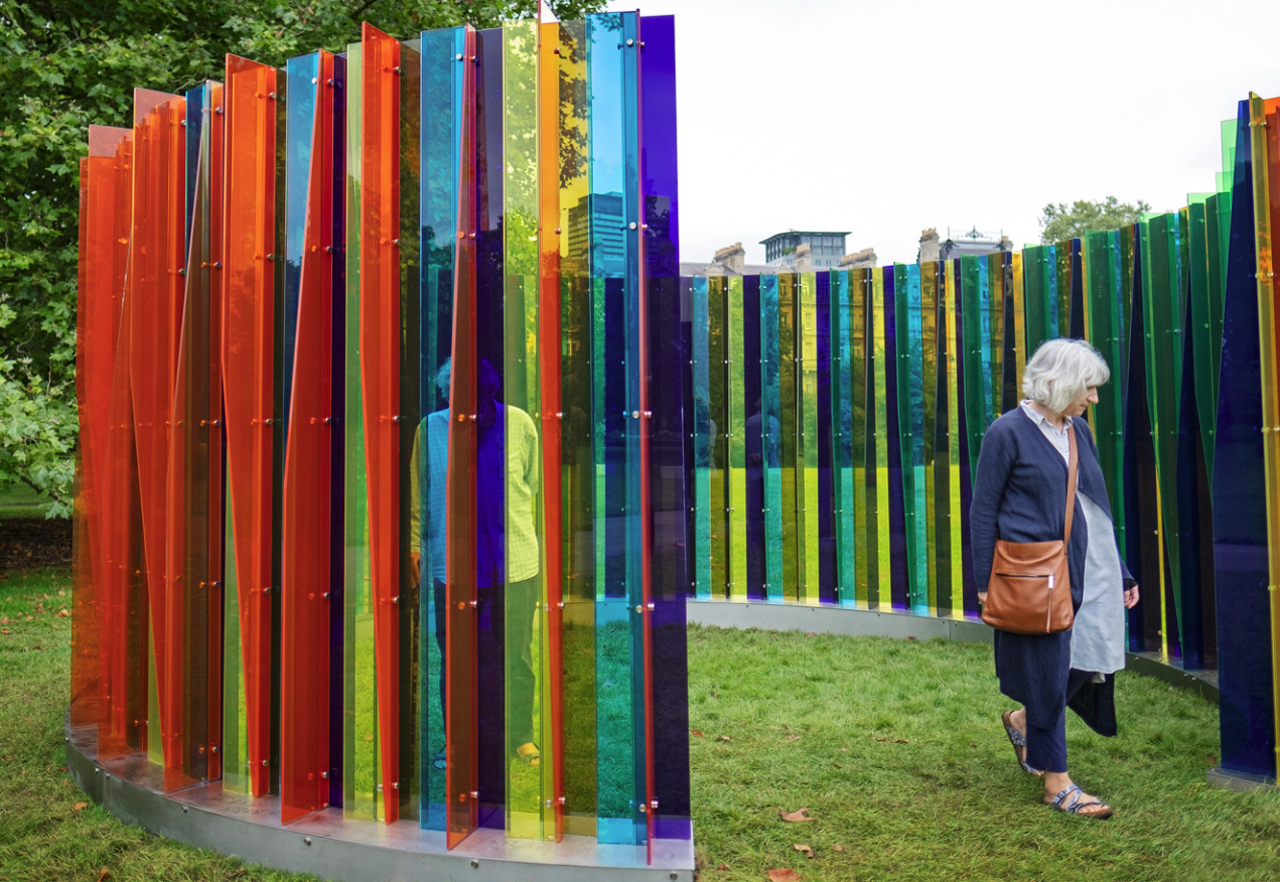 Many London dealers were fearful that Frieze’s close proximity to FIAC, coupled with the U.K.’s still stringent testing policy, would cause mainland European collectors to stay away from the fair. But such a scenario was not reflected in the fairly brisk trade reported during the five day event, with some lucky dealers selling out their booths within hours of opening. By the second day Berlin’s Tanya Leighton Gallery, had nearly completely sold out its Esteban Jefferson’s Petit Palais series at prices ranging from $25,000– 50,000.

The reemergence of the art fairs has carried on a trend amongst collectors which has seen demand for painting increase, often at the expense of photography – currently in the midst of a half-decade slump. The first few days of Frieze London were particularly energetic with Xavier Hufkens selling Tracey Emin’s There was so much more of me (approx. £350,000) on the second day of the fair. At Frieze Masters London’s Robilant and Voena gallery sold a stunning Pablo Picasso drawing priced at around €500,000 ($580,000). 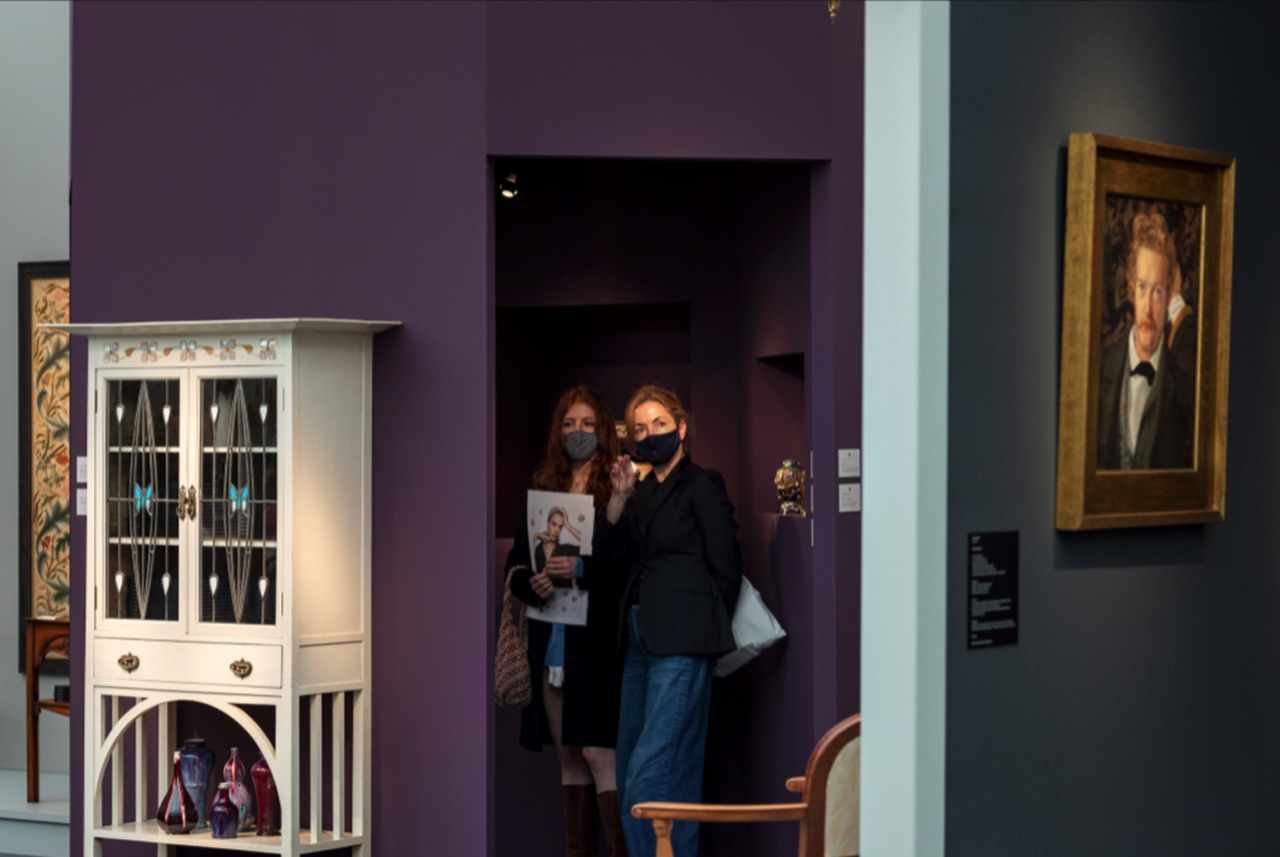 Never before have Frieze and FIAC taken place so close together and with FIAC starting on the 21st of October – just four days after Frieze finished – non-Europe based dealers simply extended their time in London before flying on to Paris. In the past year CO2 emissions has become a major issue in the art world. Whereas once the attitude of bigger, brasher and bolder was the name of the game, the art world has gone through an enforced period of self-scrutiny. Sustainability is the new buzz word as the galleries and fairs have become more mindful of their practices. It is not surprising that the recently formed Gallery Climate Coalition (GCC), a charity founded by galleries across the world in response to the climate emergency, had a prominent booth in the fair.

In France, FIAC Paris has moved from the Grand Palais and will mainly be taking place at the Grand Palais Ephémère, giving visitors a chance to preview one of the first buildings for the Paris Olympic games in 2024. There’s an excitement around FIAC 2021, which is in no small part down to Brexit and the possibility that the city has the potential to usurp its rival across the Channel and become the most important art capital in Europe. According to the journalist Kate Brown writing in Artnet, Paris’ auction houses have seen a 50 percent expansion in sales since 2019. Such an upturn would explain why the mega gallery, Gagosian, is setting up its third site in the city. At the fair the gallery will also be presenting Alexander Calder’s monumental Flying Dragon, 1975 at the Place Vendôme. 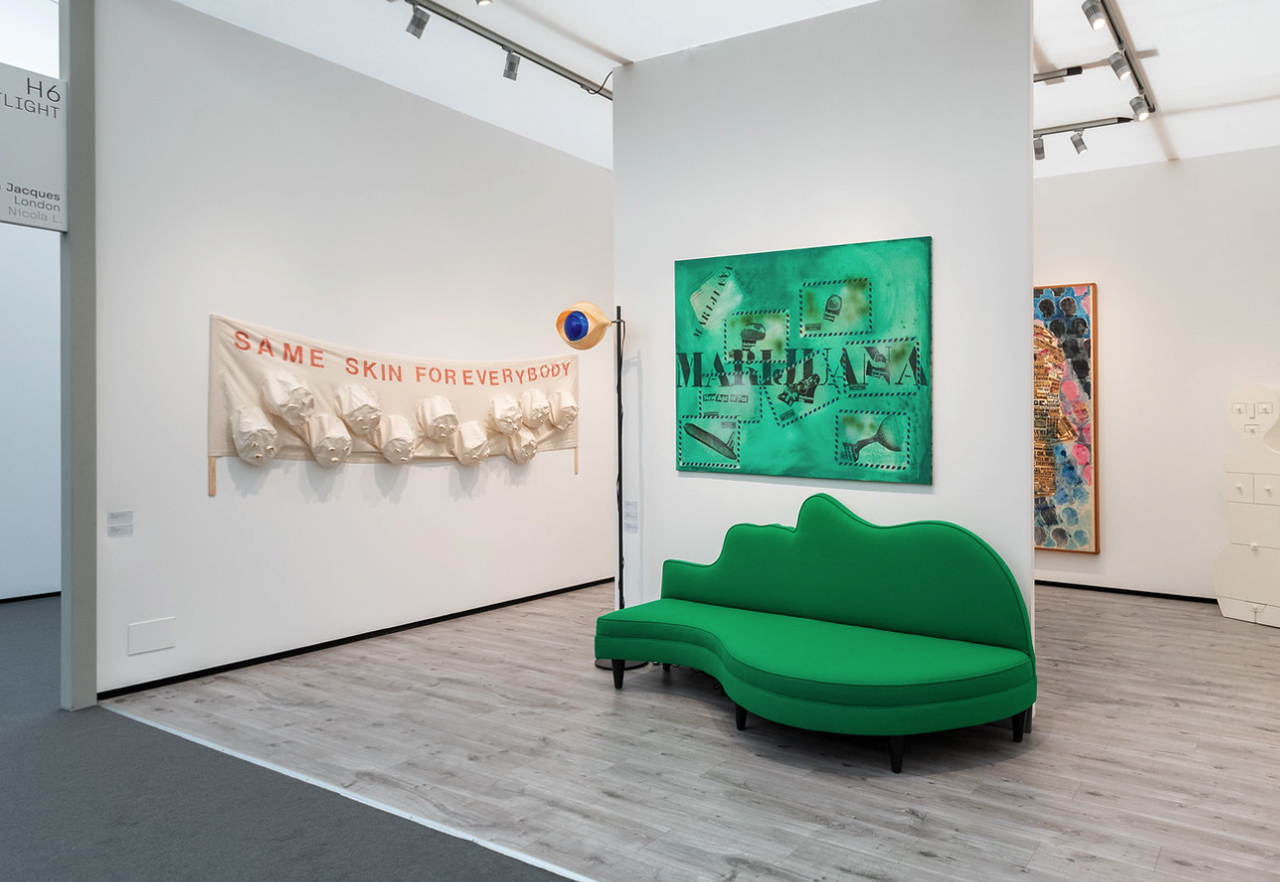 Many galleries have synchronised their booth presentations to coincide with the dense program of long overdue exhibitions now taking place across an array of Parisian institutions. To coincide with Georg Baselitz’s retrospective at the Pompidou, White Cube will be showing his sculpture Römischer Gruß (priced at $1.3 million). In addition Hauser & Wirth will be showing a sculptural work by Louise Bourgeois and a body print work by David Hammons, who features prominently in the inaugural exhibition at the highly impressive Pinault Collection.

After what has been an exceedingly trying time for the art market and its wider ecosystem, the crammed art fair schedule, with all the energy and interest it generates, points to a fast recovery. Whatever the misgivings may be, art fairs provide real-life exchanges and indicate a healthy start to the 'first' post-pandemic cycle.