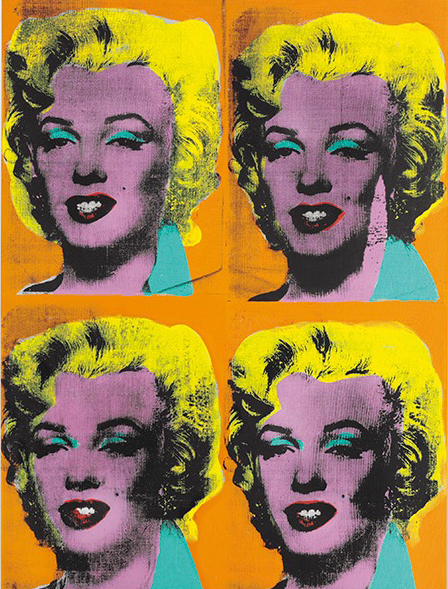 On the evening of November 10th Christie's is auctioning Andy Warhol's Four-Marilyns, 1962, the third time it has been up for sale in just two years. Although it originally sold at Phillips for $38.6 million in 2013, Four-Marilyns was then sold to a private collector for $44 million and now, just two years later, it is for sale for the third time at Christie's where it is estimated to reach $60 million. It clearly indicates an insatiable demand for Warhol especially from a growing and moneyed network of Chinese collectors. Christie's has stated that there are only three of the "four times-Marilyn. This version is the best because it has the orange background." Just 16 years ago the same painting sold for $2.3 million, revealing an unprecedented rise in value.

Warhol's Four-Marilyns is part of a mega-auction at Christie's in New York focusing on the biggest names of 20th century art. With a selection of paintings and sculptures including Andy Warhol's Four Marilyns and Louise Bourgeois' monumental Spider as well as works by Lucian Freud and Cy Twombly, these masterpieces are expected to achieve staggering results at auction.

At least fineartmultiple has an original Warhol for sale, but at a slightly more reasonable price—Oyster Stew, 1969 a limited edition of only 13, is available to buy now on our platform!