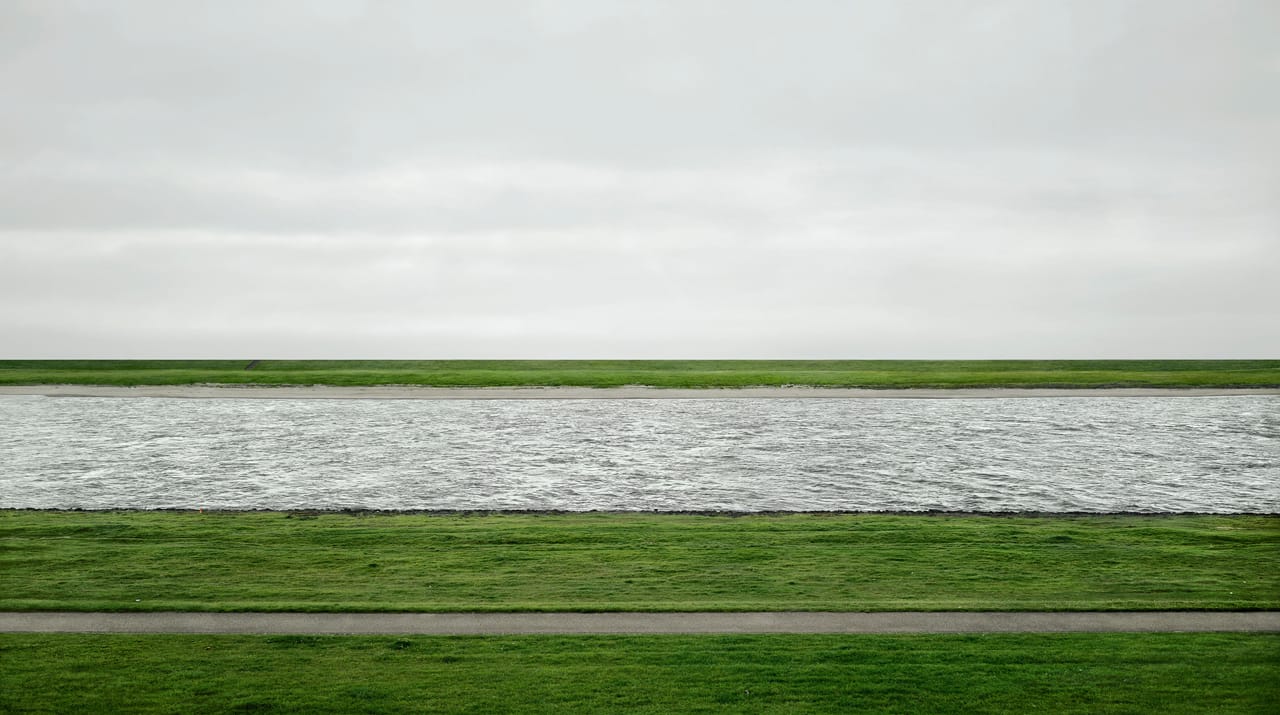 In 2011, Andreas Gursky’s Rhein II sold at auction for $4.3 million, an astounding achievement when you discover that it was one of an edition of 6. The artwork is unforgettable, at over 3.5 meters in length, it reveals a stretch of the River Rhine, whose saturated shimmer contrasts with the dull, gray and overcast sky. Sublime and otherworldly, it fits into the grand tradition of German Romanticism, whilst its thick bands of color reference the sombre work of the Abstract Expressionists.

The image is of course too good to be true. The detail on the farthest river bank is as sharply defined as the nearest, a case of multiple shots meshed together. Despite the asphalt path running along the bottom, there is no sign of human intervention, the artist having digitally airbrushed out the distant power stations, dog walkers and trees that had been troubling him whilst he prepared the shot. Ultimately, it is the image of a place that doesn’t exist—a place which is in no way less beautiful because of that fact.

Since coming to attention in the 1990s Gursky’s documentation of storage facilities, mass tourism, factories, clubbers, and the sheer incomprehensible teeming mass of people, has come to define the way in which we see the contemporary world. He gives us the opportunity to see the systems we live by—humankind, dwarfed by its own industries and consumer societies. Even those who see Gursky’s work knowing next to nothing about contemporary art, “are always”, according to Ralph Rugoff (the director of the 2019 Venice Biennale), “left with a powerful encounter”.

Born in Leipzig in 1955, Andreas Gursky spent most of his youth in Düsseldorf where his father worked as a commercial photographer. Although he had long been convinced that he would have nothing to do with the profession, by 1978 he had begun to study photojournalism, supporting his studies by driving a taxi. A few years later he enrolled at the Kunstakademie Düsseldorf on the urgings of his close friend the photographer Thomas Struth. It was there that he came under the tutelage of Bernd and Hilla Becher, the legendary photographers whose Kunstakademie became a kind of finishing school for pioneering photographers, with Thomas Ruff, Candida Höfer and of course Thomas Struth passing through its doors.

Right from the start Andreas Gursky showed an astonishing aptitude for composition, and by 1988 he was producing his own vast color prints. With some measuring upwards of 2 meters by 3.5 meters, photography now had the scale and impact of painting. Back then contemporary photography was just beginning to be embraced by a still sceptical art world. In the 30 years that have since past, photography’s rise has been nothing short of meteoric—and at the heart of it all was Gursky himself. 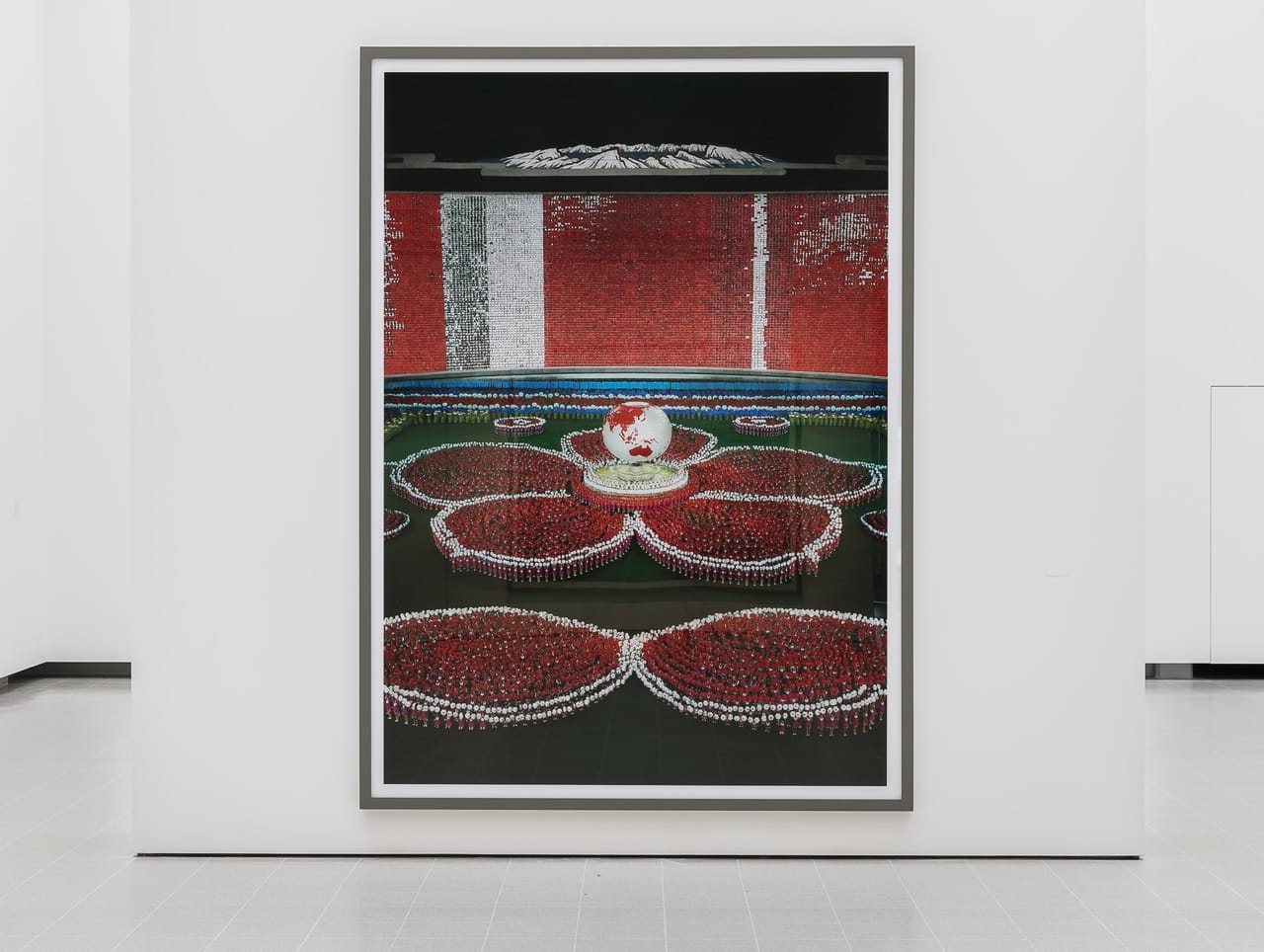 It was in 1991 that Gursky single-handedly invented the all-over focus, having come up with the idea of using computer technology to manipulate an image of a Siemens factory. Without having just one point of focus, the notion of everything being sharply visible fitted in with a new globalized world, where everything happens at once and everything and everyone is hyper-connected.

Soon he began travelling around international Stock Exchanges, photographing the frenzied cornucopia of global wealth accumulation. They proved to be one of his lasting legacies, one London Hedge Fund alone has collected five of the vast Stock Exchange images to adorn its trading floor. Just as in all his works, they are striking for being neither critical nor apologetic. 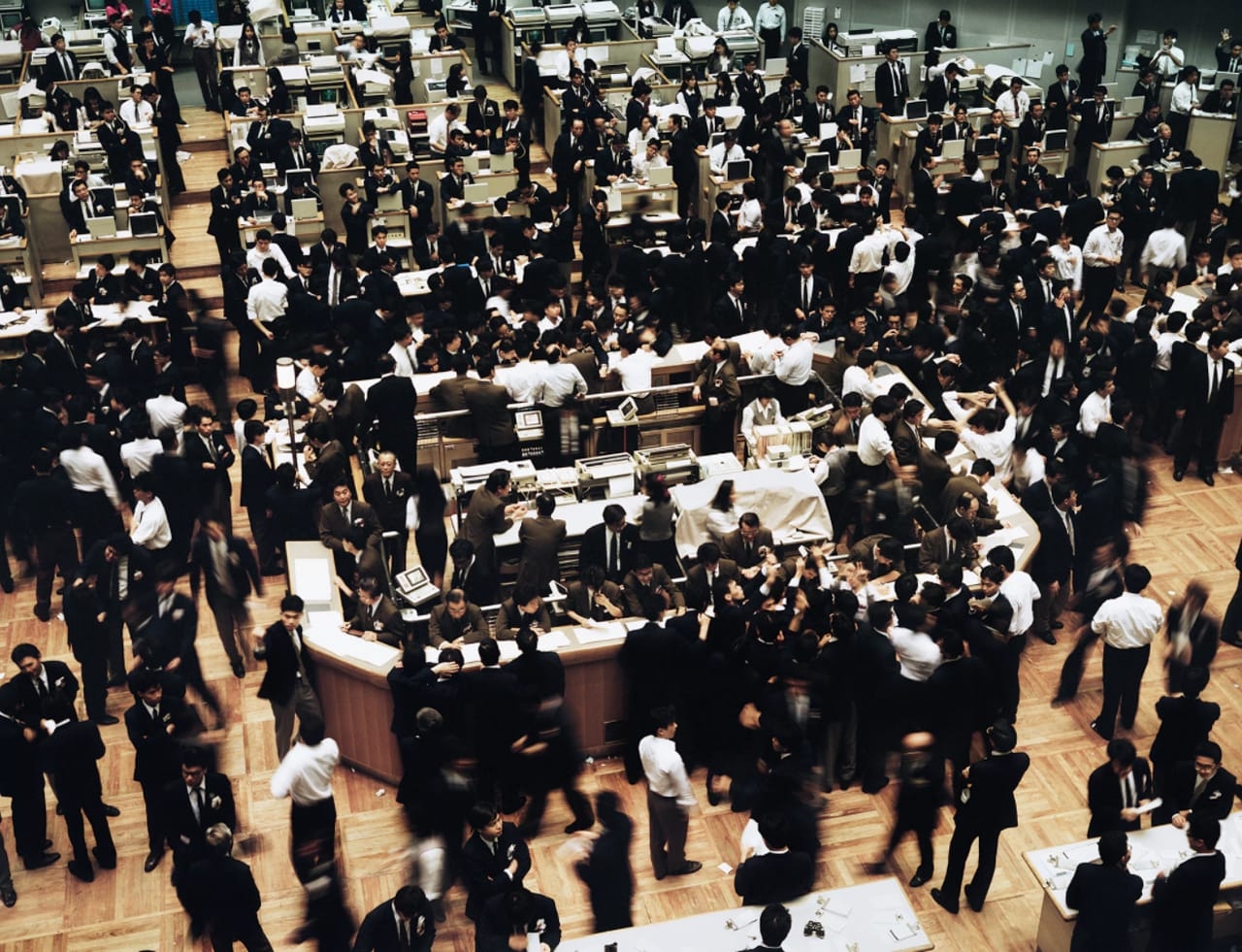 Andreas Gursky’s overriding aim has always been to “show the contemporary world the way it is”. This is why he can photograph an Amazon warehouse facility without pointing out or criticizing the tough working conditions the workers face and without feeling the need to make any “political statement”. Amazon is “so practical and so quick, and you want something and the next day you have it. This is also the truth”.

He is truly a photographer in-line with global capitalism, where convenience takes precedence over ethics. “I am never interested in the individual”, Gursky is at pains to point out, “but in the human species and its environment”. This all-seeing God-like viewpoint remains wholly detached, as though an alien were viewing the human race in minute detail from afar, or as a scientist would observe ants going about their duties in their hidden, subterranean nest. 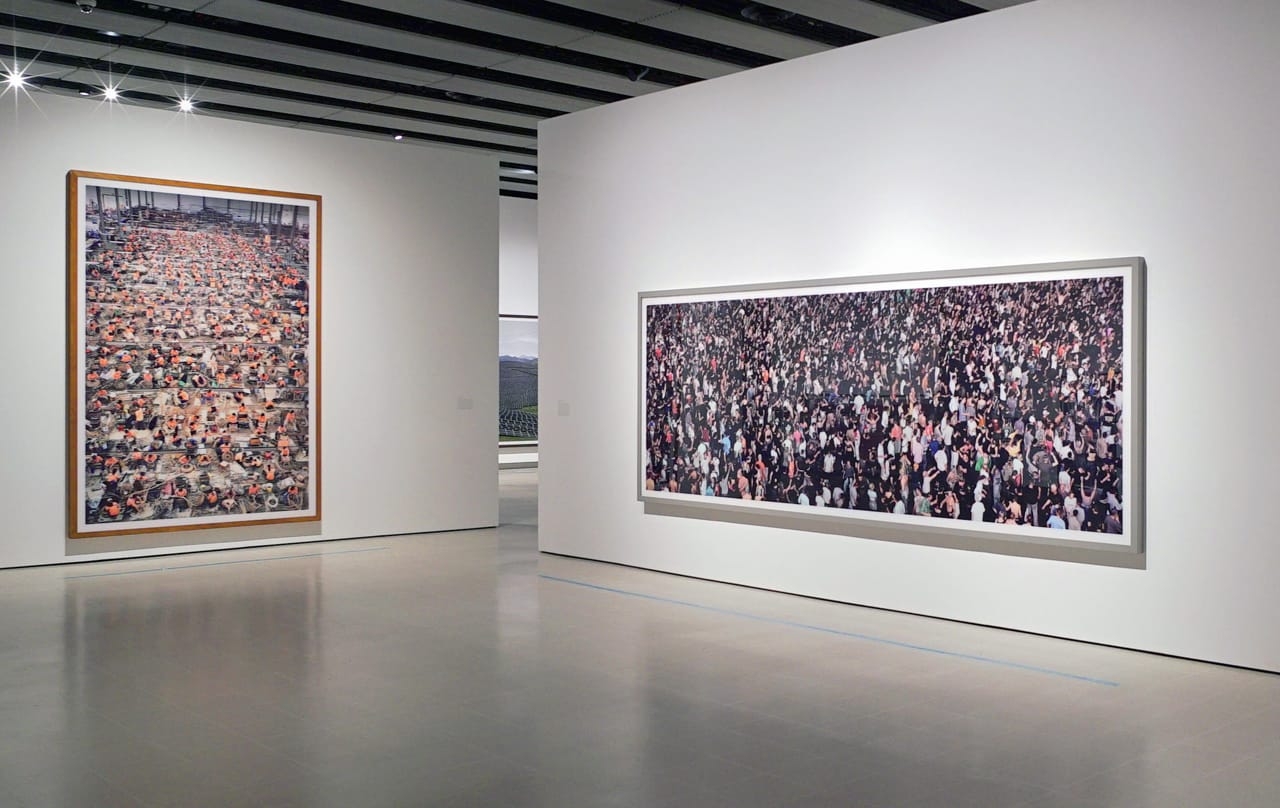 Despite the fact that the world is fascinated by his production processes, Andreas Gursky prefers not to talk about how his artworks are made in case they “lose a bit their secret and mystery”. His aim in using digital technology is to heighten the image of something that already exists in the world, rather than to create fictions.

His view of Montparnasse, 1993, the vast housing block in Paris, makes the homes of the residents appear like tiny cells. The tessellated buildings have been meshed together, their walls manipulated into perfectly straight unending lines. Yet despite the work’s brutalism, we see the occasional glimpse of a moving person—he never lets us forget about the life behind every window.

One of the biggest surprises in his latest exhibition at London’s Hayward Gallery—his first U.K. retrospective—are the beautiful snap-shots taken from a moving vehicle. Quite unlike anything that he has ever produced before, Gursky has enlarged images taken with his iPhone to reveal all the stunning glitches and distortions. The result is a thrilling contrast between the blurred angular edges of the houses and caravans and the monumental mountains looming behind them.

Andreas Gursky has always had a taste for the cutting-edge and new—a stance that perhaps in part explains his profound love of Techno. An unexpected passion for a man now aged 63, who clearly enjoys the discomfort it causes his own children. But that embrace of new, innovative technologies has allowed him to be at the forefront of contemporary photography. That ability to probe the medium’s capabilities have marked him out to be a great photographer—but what marks him out as a great artist is his ability to frame our living world and serve it back to us in ever wondrous and surprising ways.

Andreas Gursky at the Hayward Gallery, London can be viewed from now and until the 22nd of April 2018. 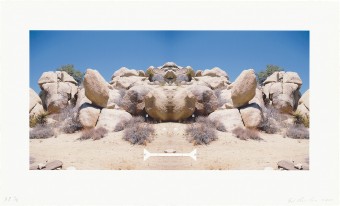