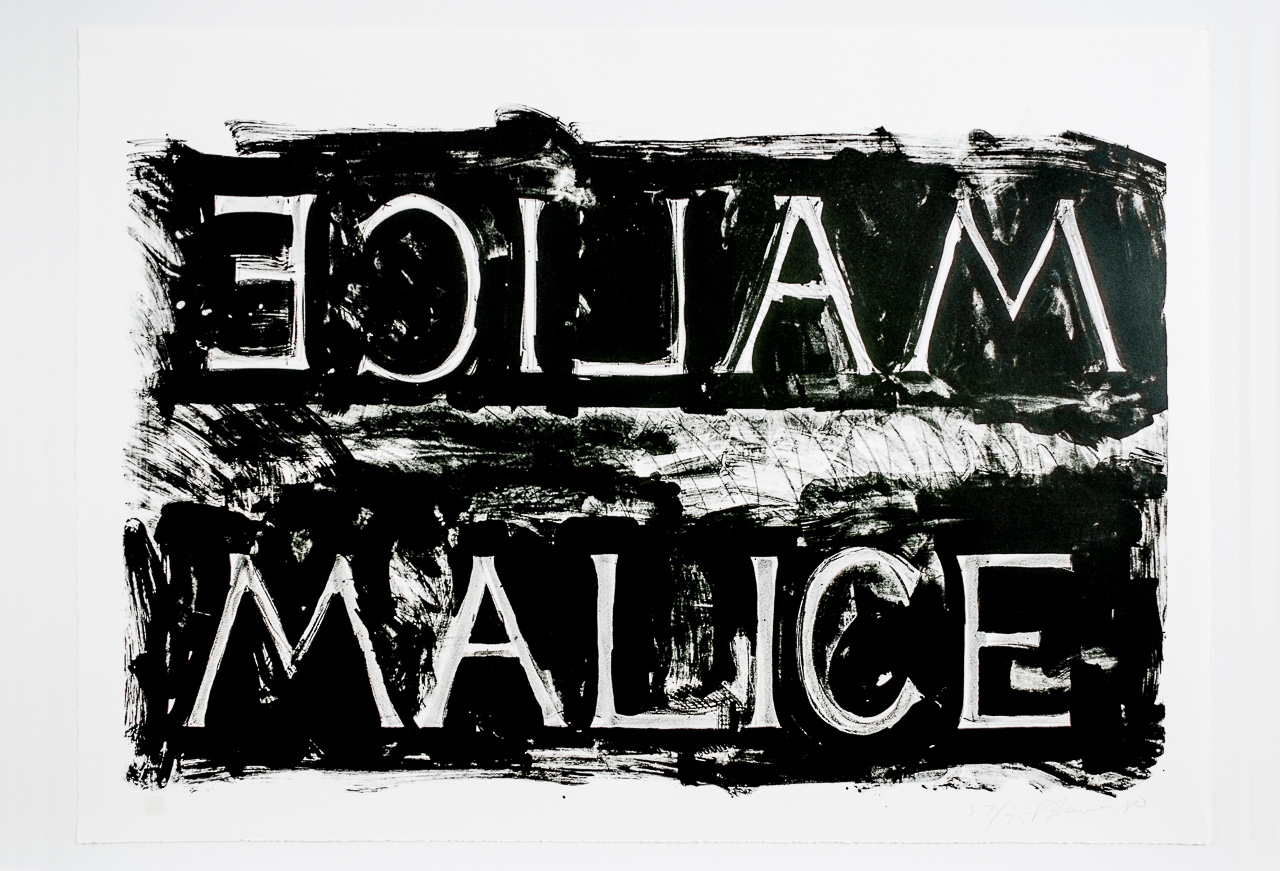 What is it?
A lithograph of a Bruce Nauman masterpiece entitled Malice from the 1980s. This is a prime example of Nauman’s enigmatic text art.

Why Malice?
Nauman has always been preoccupied with violence and cruelty, “my work comes out of being frustrated about the human condition”, he once remarked, “and about how people refuse to understand other people. And about how people can be cruel to each other.” A reason perhaps why Nauman chooses to remain away from the limelight, living in relative seclusion on his ranch in New Mexico.

Why the reversal?
The reversal of the top Malice is also a reference to the reversal inherent in direct stone lithography and establishes what Ruth E. Fine calls a “punlike relationship to the word message.” Often his reversals are playful, such as Bruce Nauman’s masterpiece Run From Fear — Fun From Rear, 1980, a piece of graffiti Nauman once saw scrawled on a bridge above a highway and which he turned into a a lewd and mischievous neon piece.

What is the idea behind the work?
Nauman is not purely focused on the definition of the word malice but on the limitations of language itself. When language, “breaks down a little bit” he once remarked, “it becomes exciting… and makes communication interesting.” Of course Nauman is also being deliberately contrary, playing word games by spelling it backwards; “That is its intent–the malice of the situation—to make it hard to read.”

Is he interested in the relationship between the artwork and the viewer?
Whether we like it or not, by reading Nauman’s text work we are engaged in a dialogue with the artist—language, in his mind is always a product of a speaker and a respondent. The viewer’s response centers around the lingering uncertainty produced by the work—how are we supposed to be affected? Is this a trite and overly dramatic text work or is it a profound meditation on the fundamental character of man?

Why is it a Multiple?
Nauman scraped out the lettering straight out of the thickly layered black ink, as though he was chiseling the words in stone. His use of ink allows the distinction between the light lettering and the darkness surrounding it to be vigorous and direct.

What are his auction results like?
For decades Nauman has been one of America’s most expensive living artists. Although his works rarely go above the ten million mark, it is practically guaranteed that a Bruce Nauman masterpiece will far exceed its estimate. An accomplished printmaker his limited editions and multiples are highly-sought after by the world’s top collectors.