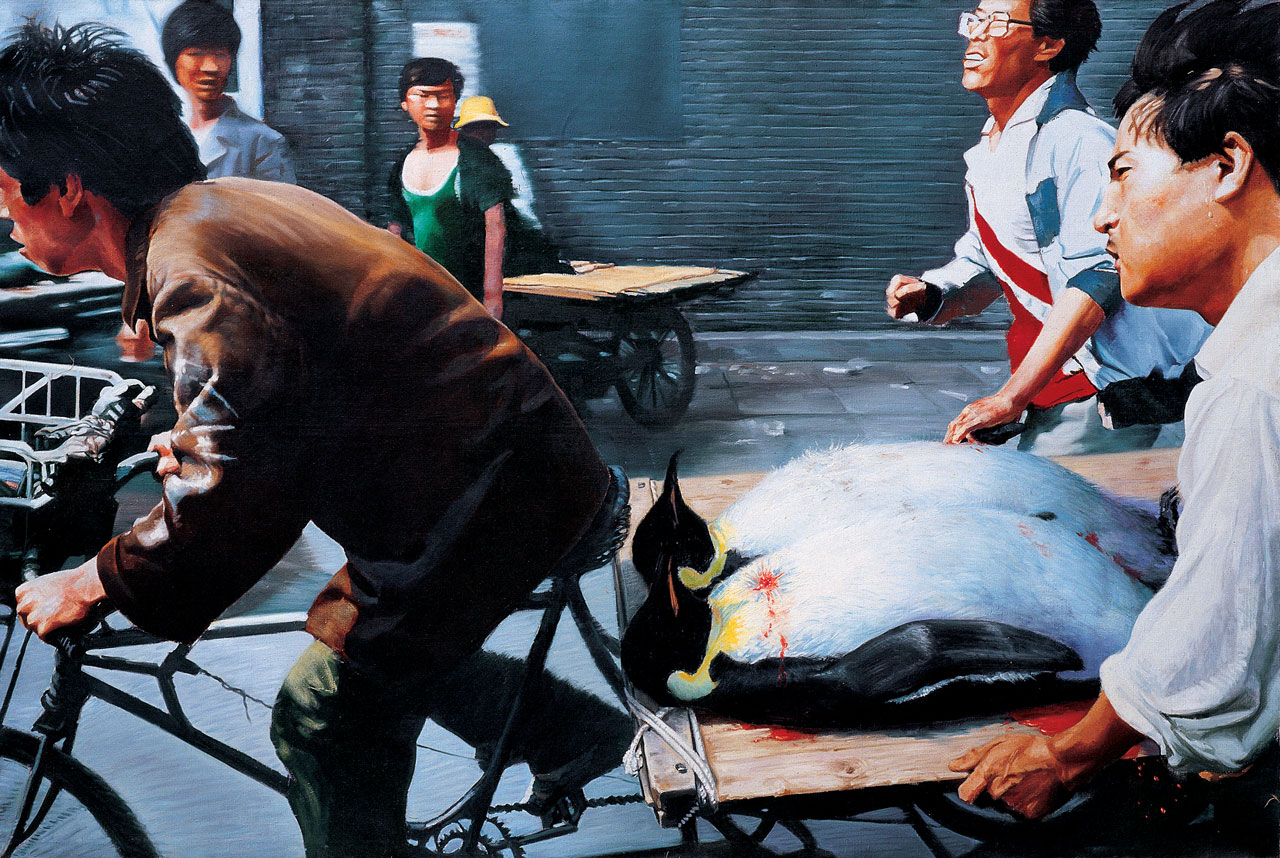 Feasting Insects, the Guggenheim and Art in post-Tiananmen China

To many Ai Weiwei is the perfectly formed personification of the Chinese art world. 1.35 billion Chinese usefully squeezed into one larger than life figure. It is that belief that the Solomon R. Guggenheim Museum in New York hopes to shatter, by revealing the full breadth of Chinese art since the Tiananmen Square massacre in 1989, right through to the dizzying spectacle of the 2008 Beijing Olympics and China’s powerful position on the world stage.

The exhibition “Art and China after 1989: Theater of the World” was at one time in danger of being overshadowed by the controversy surrounding the Guggenheim’s removal of three artworks, after they were condemned by animal rights groups for showing scenes of animal cruelty. But it was not the 800,000 strong online petition which convinced the Guggenheim to withdraw the works, but threats of violence to its staff. The protestors had a point, Sun Yuan and Peng Yu’s Dogs That Cannot Touch Each Other, is a video portraying pit bull dogs tied to treadmills, attempting to attack each other but of course getting nowhere. By the end, with the dogs salivating excessively and exhausted, it is difficult to know what to think, other than “poor dogs.”

Sun Yuan and Peng Yu’s, Dogs That Cannot Touch Each Other. Via: YouTube

No more controversial is Huang Yong Ping’s Theatre of the World—from which the exhibition takes its name—which features a giant cage where reptiles, crickets, centipedes and cockroaches battle it out for supremacy. A sort of Ultimate Fighter for creepy crawlies. Whilst the creatures feast on each other, onlookers peer down from above, the environment warmed by a lamp at the top of the cage. Still, it is a sobering irony that the three works taken down were all made to highlight the repression of freedoms in contemporary China. As many have already pointed out—with such important matters at stake, should the Guggenheim really have backed down? 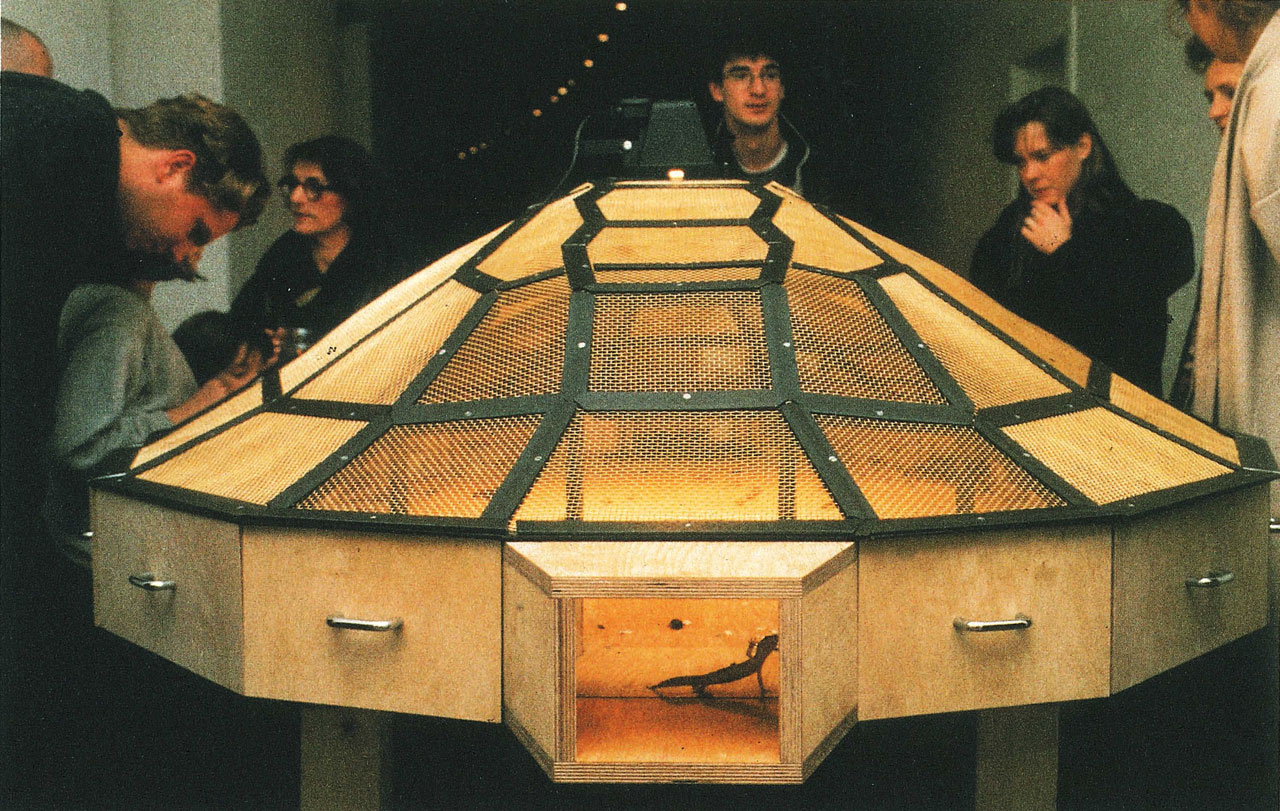 The Museum clearly felt they had no other choice, releasing the statement “As an arts institution committed to presenting a multiplicity of voices, we are dismayed that we must withhold works of art.” Whatever the case, it is never a good start to an exhibition to discover the three most eagerly anticipated works have been withdrawn. At least there is still much more to see. 71 artists and groups across China and worldwide have contributed to the exhibition. Much of it centered around the notion of the individual being apart from the collective—critical provocations “free from ideology.”

It is astonishing to comprehend the speed of change that China has undergone in recent history. From a fairly inward looking nation, that suppressed installation art entirely in the aftermath of Tiananmen Square, its signing of the World Trade Agreement 10 years later in 2001 precipitated a huge economic boom, and the government were quick to recognize the importance of fine art as a tool of soft-power. 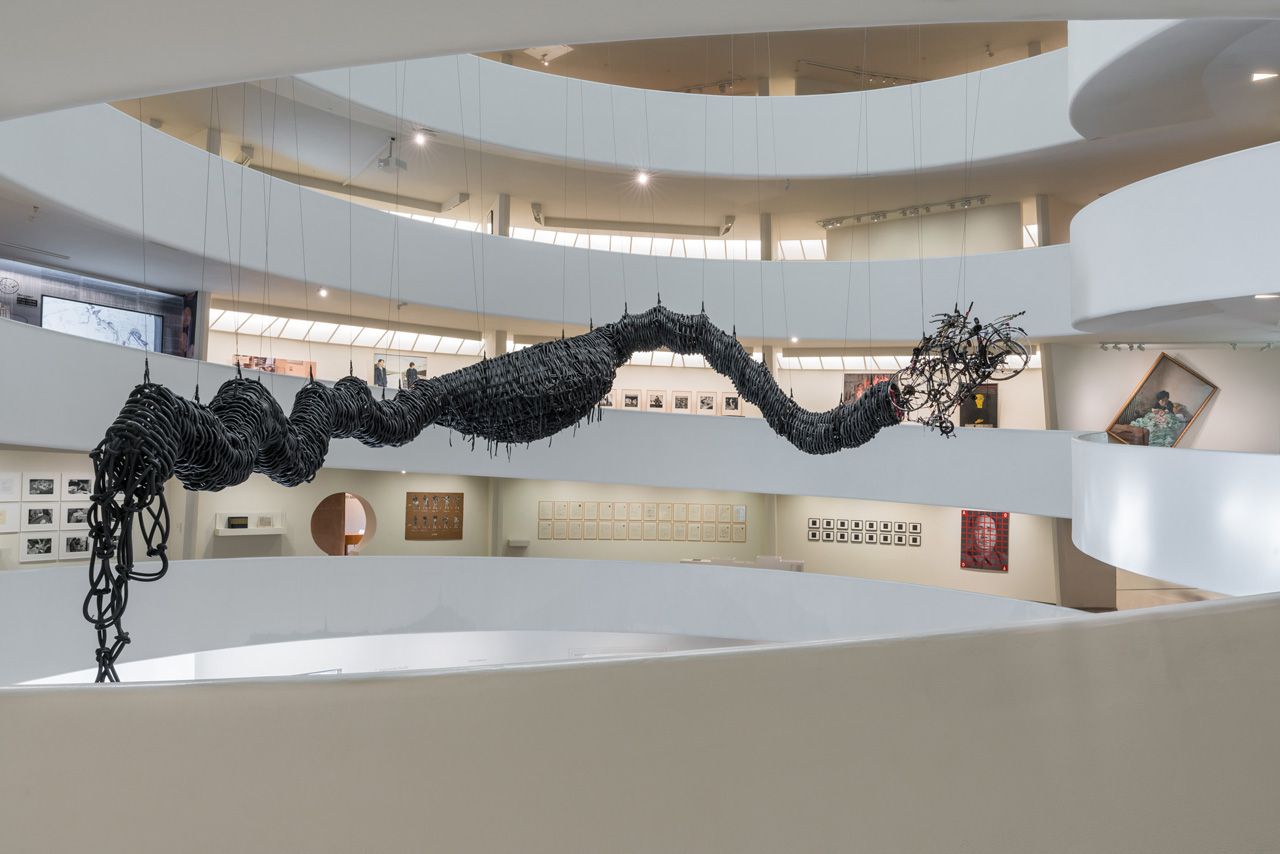 From being forced to organize secret shows in private apartments, galleries started popping up and vast sums of money were invested in art schools, such as the China Academy of Art in Hangzhou, where artist Zao Wou-Ki used to teach. But the former communist party leader, Deng Xiao Ping’s exhortation for people to “forget about your political problems—get rich,” was not swallowed by everyone. And with the succession of Xi Jinping in 2012 came rising online censorship, and the ruthless suppression of political activists, human rights lawyers and artists.

Undoubtedly the most high-profile and vocal opponent was Ai Weiwei, whose heroic stance looms large over the exhibition (he is also the co-curator of the show’s documentary-film component). His magazine with Xu Bing, made in the immediate aftermath of the Tiananmen Square massacre, gave Chinese artists the confidence to make art for the first time as citizens of a global world. Even though, according to Alexandra Munroe the curator, there was still “no infrastructure for contemporary art in China.” 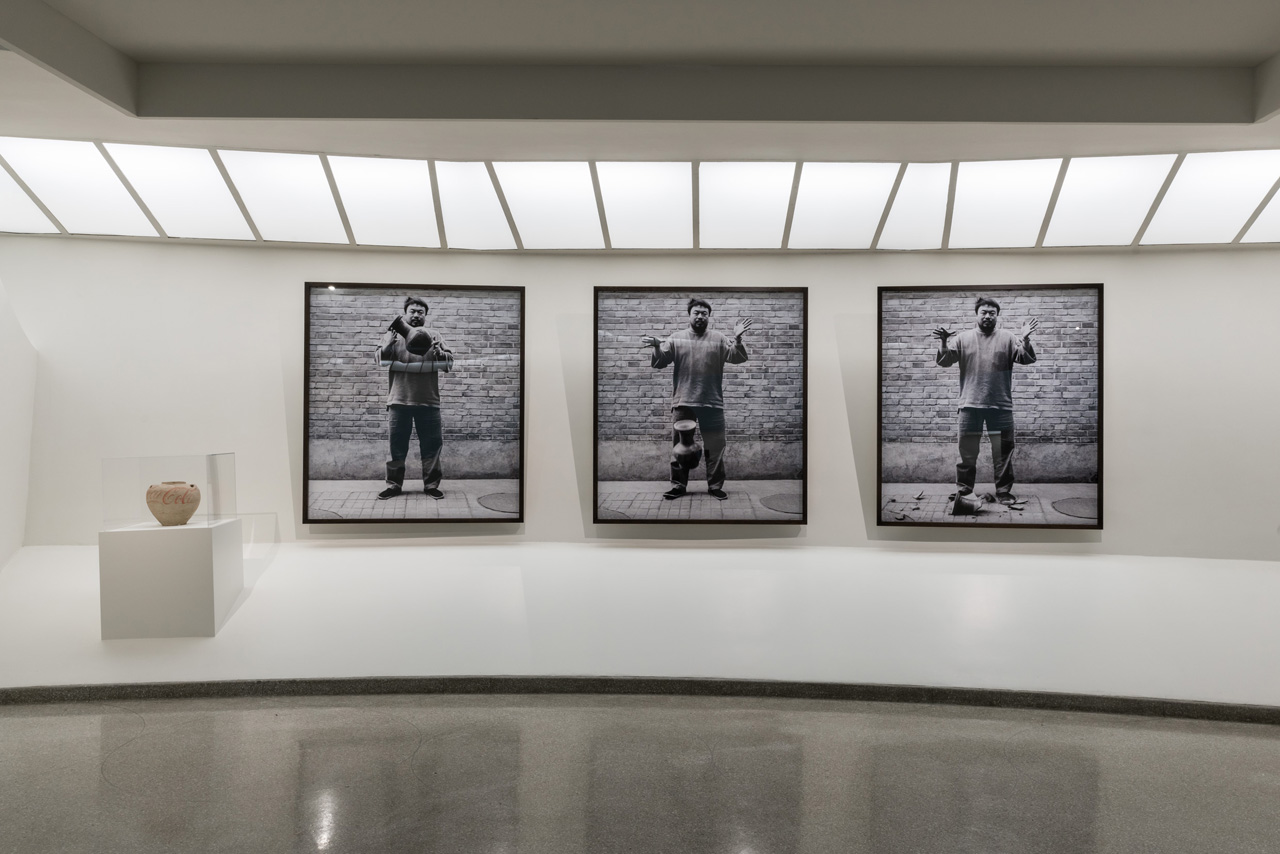 His notorious artwork Dropping a Han Dynasty Urn, 1995, savages both China’s 20th century ruptures from the past, and as well as critiquing western attitudes that believed—at least at the time—that all Chinese art was ancient and probably made from terracotta. It is a shocking piece to behold, the destruction of something so beautiful, made all the more jarring by it being in the form of a Western triptych: going, going, gone!

Another standout work is the 1991 video Water: Standard Version from the Cihai Dictionary by Zhang Peili, that depicts a famous anchorwoman from the state-run television channel, reading a list of words all related to water. The meaning is unclear, until you discover that that same newsreader had delivered the news on the Tiananmen crisis without ever once mentioning the aggressive and violent methods used against the protestors. 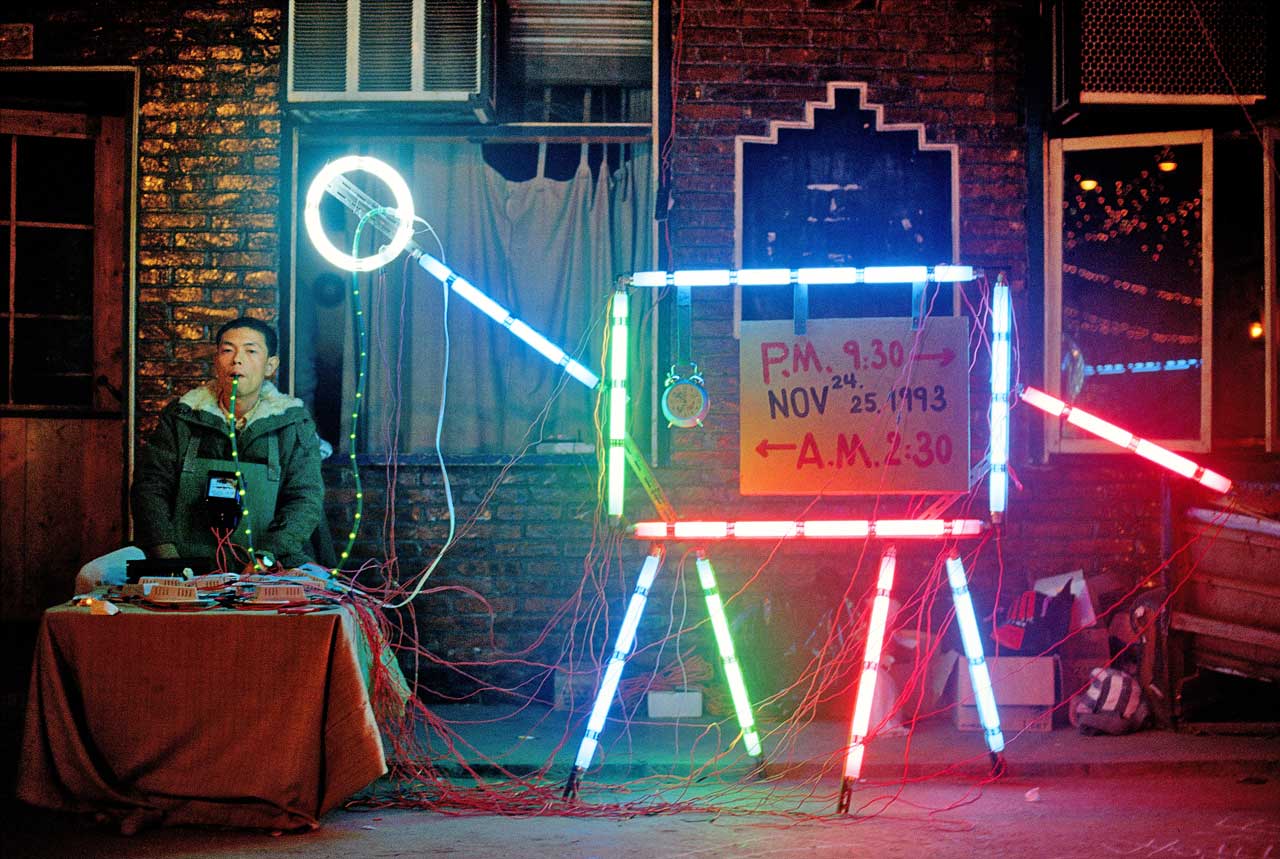 This is the first major United States exhibition to put this generation of Chinese conceptual artists center-stage, many of whose artwork have never been shown before in a western museum. It is a staggering collection of works, which reveal much about a scene and a country we still know little about. An exhibition that sheds light on our “own history of global contemporary art”, and, as Munroe states, “of massive globalization.”

Art and China after 1989: Theater of the World can be seen at the Solomon R. Guggenheim Museum in New York from the 6th of October through to the 7th of January. 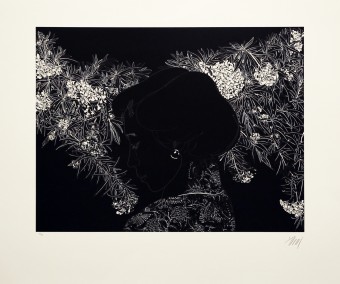