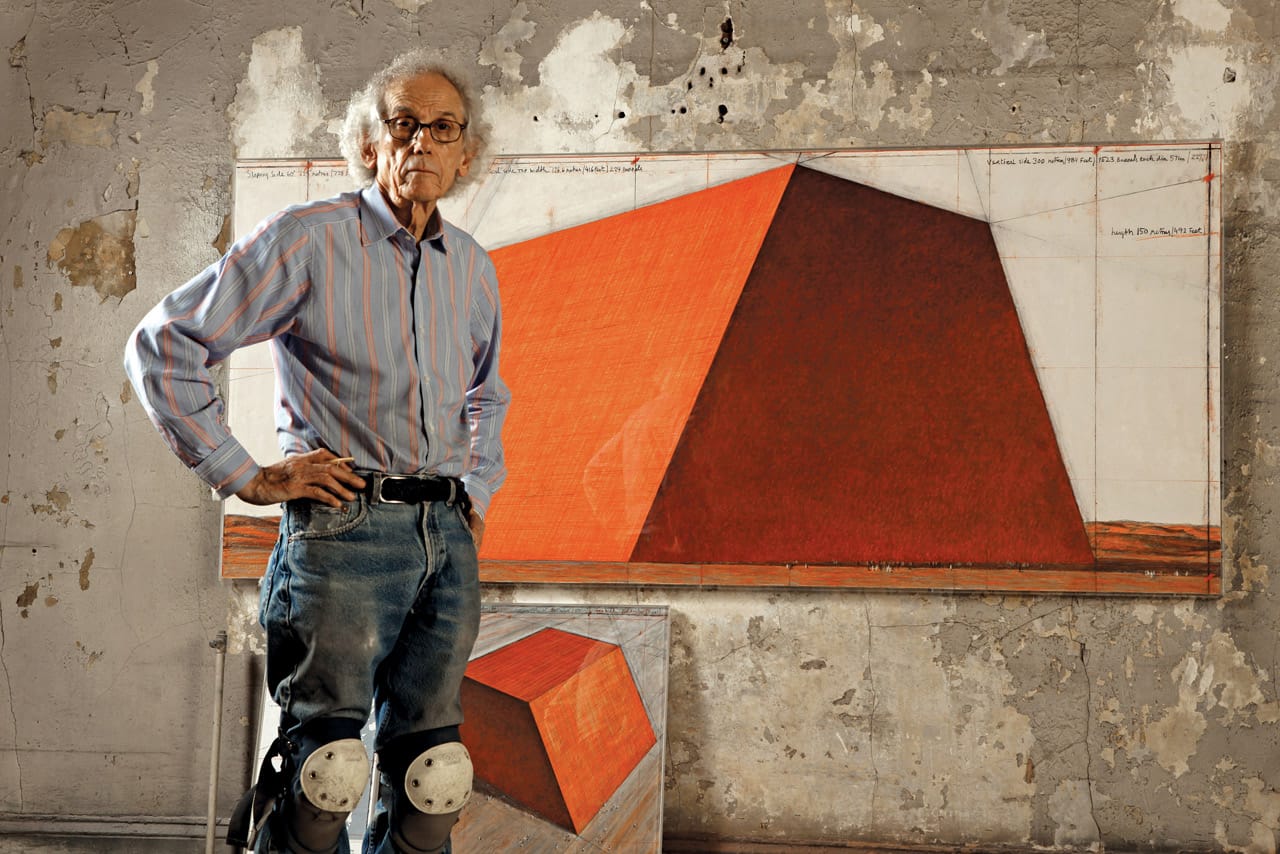 Christo in his studio with a preparatory drawing for The Mastaba, 2012. Photo: Wolfgang Volz. © 2012 Christo
Exhibition — 3 years ago

Born on the same day in 1935, Christo and his late wife Jeanne-Claude are renowned for their monumental works of art that disturb the environment and provide new ways of seeing the landscape. From wrapping the Berlin Reichstag to surrounding islands near Miami with pink fabric, many of their sculptural installations have became highly iconic, yet often controversial. Up until Jeanne-Claude’s death in 2009, the pair were equal collaborators on all of their daring and visionary projects and Christo has continued in the years since to realize unfinished pieces under both of their names, including their latest work—The London Mastaba. 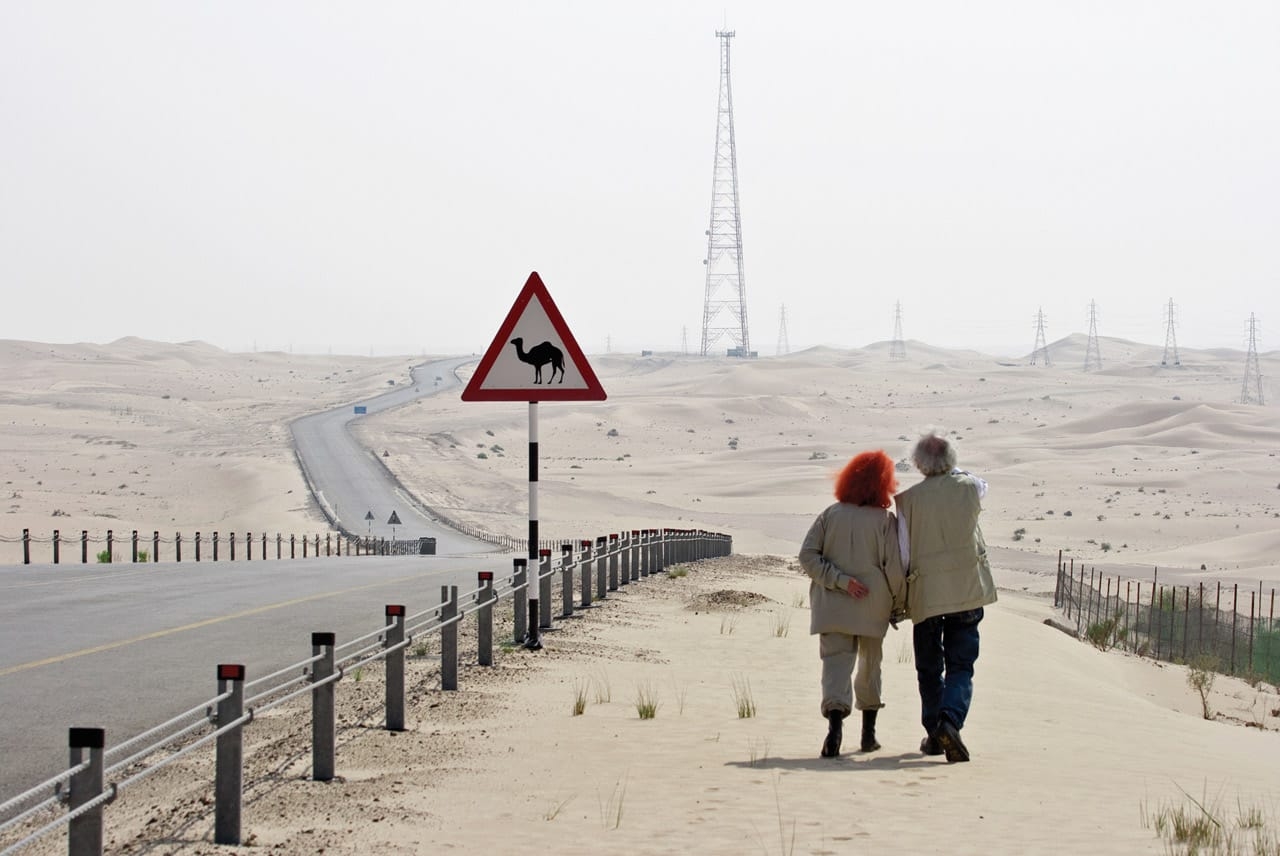 Now in his early 80s, Christo still manages to work with a tireless energy, creating all of the preparatory drawings for each sculpture by hand and walking up and down the ten flights of stairs in his Tribeca studio every day. Such an unbeatable and unwavering drive has proven to be an essential part of the pair’s practice; whose sculptures are often decades in the making and require years of bureaucratic struggle. 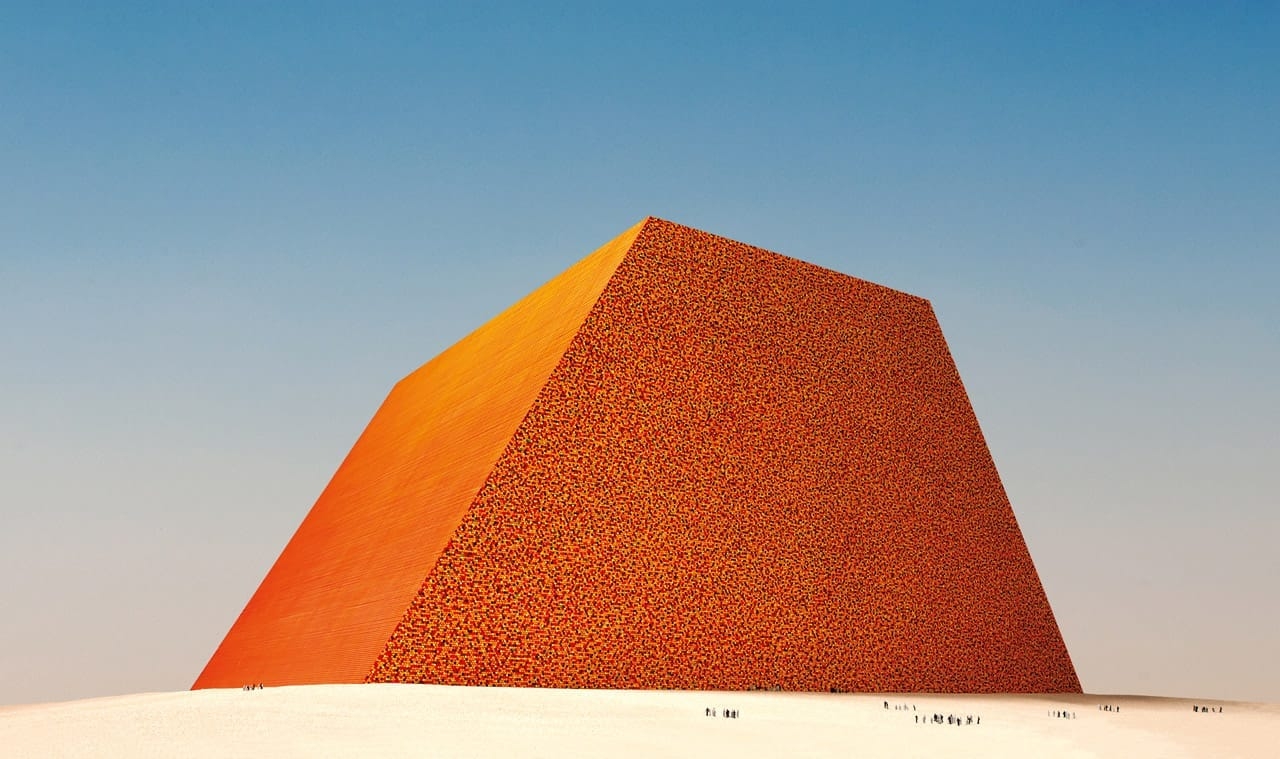 This is particularly true of their Mastaba project, which was initially conceived in the late 1970s. Based on the trapezium-like shape of an ancient Egyptian tomb, the Mastaba form was first used by Christo and Jeanne-Claude in a 1975 collage entitled Texas Mastaba America. The project then evolved and in 1977 they worked on designs for a Mastaba to be installed in a desert location near Abu Dhabi. Forty years later, The Abu Dhabi Mastaba, a structure of over 410,00 stacked oil barrels, still remains in its planning phases. If it ever gets the go-ahead, it will become the largest sculpture ever made—taller than the Great Pyramid at Giza and with a footprint the size of the Vatican Square in Rome.

Made from a comparatively small, yet still impressive 7506 stacked oil barrels, The London Mastaba, which can be seen from next week in London’s Hyde Park, will rise over 20m from the Serpentine lake and be 30m wide and 40m long. This towering, floating installation marks the first time one of Christo and Jeanne-Claude’s large-scale sculptural works has been displayed in the United Kingdom and is the first time one of their Mastaba forms will transcend the page and be seen in public space. 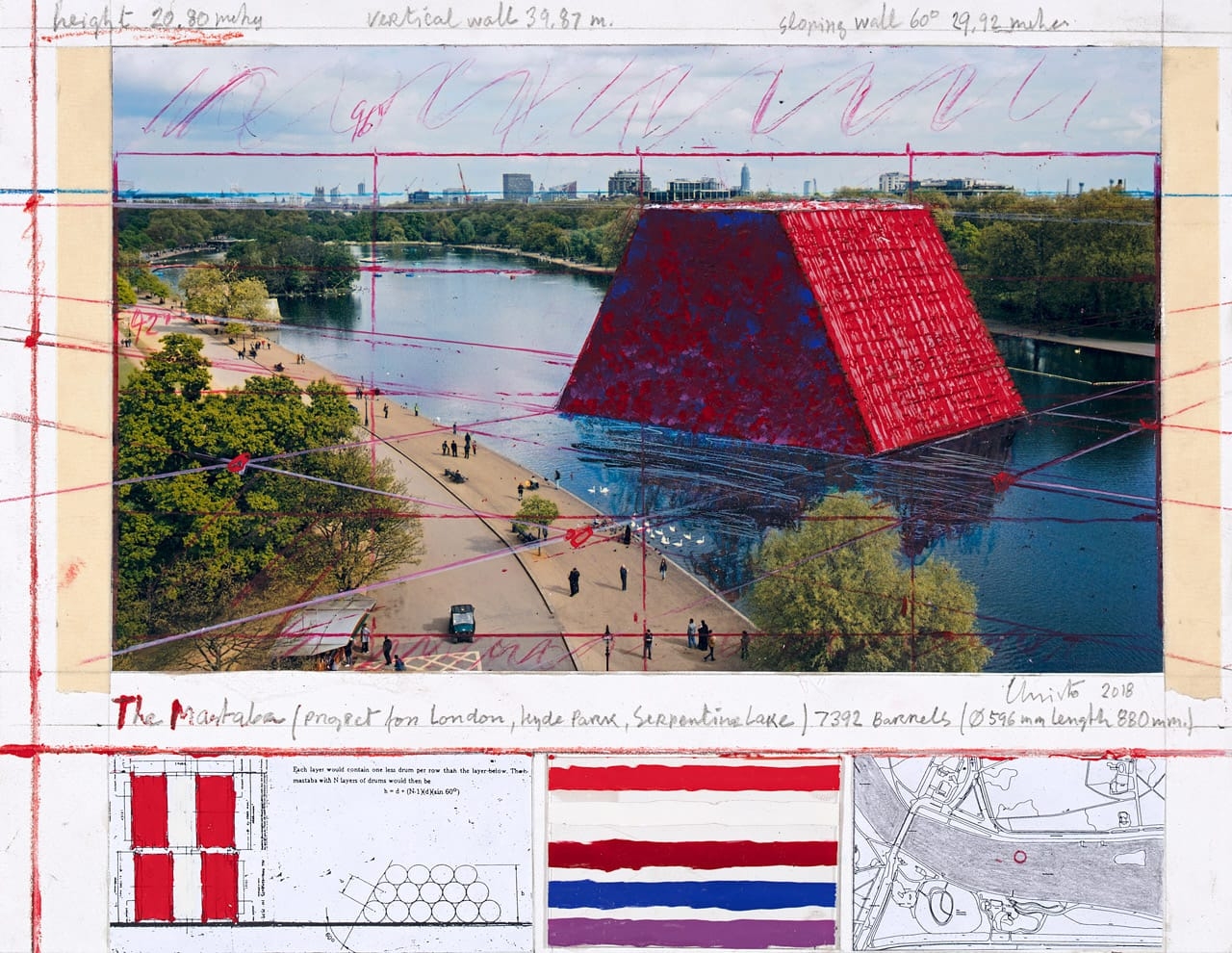 Like all of Christo and Jeanne-Claude’s works, The London Mastaba and accompanying exhibition at the Serpentine gallery will be completely free to visit and is funded entirely through money raised by the sale of Christo’s original works. The artists have always worked outside the gallery system, resisting representation and sponsorship which affords them an enormous amount of freedom in their artistic endeavours and is a complete contrast to their restrictive backgrounds. “I came from a communist country. Ever since I escaped through the woods from Czechoslovakia to Vienna in 1957, I have been free. I like to be totally free to do the things I want,” Christo explained in a recent interview.

Throughout their highly liberated career, critics have remained persistent in attempting to assign meaning to Christo and Jeanne-Claude’s works and to understand them through social and political paradigms. The London Mastaba project is no different with critics speculating that the stack of oil barrels is perhaps a metaphor for our society’s dependency on oil or a criticism of our pollution of the planet. However, Christo maintains that he “cannot explain his art. Everything I do is irrational and useless. I make things that have no function—except maybe to make pleasure.” 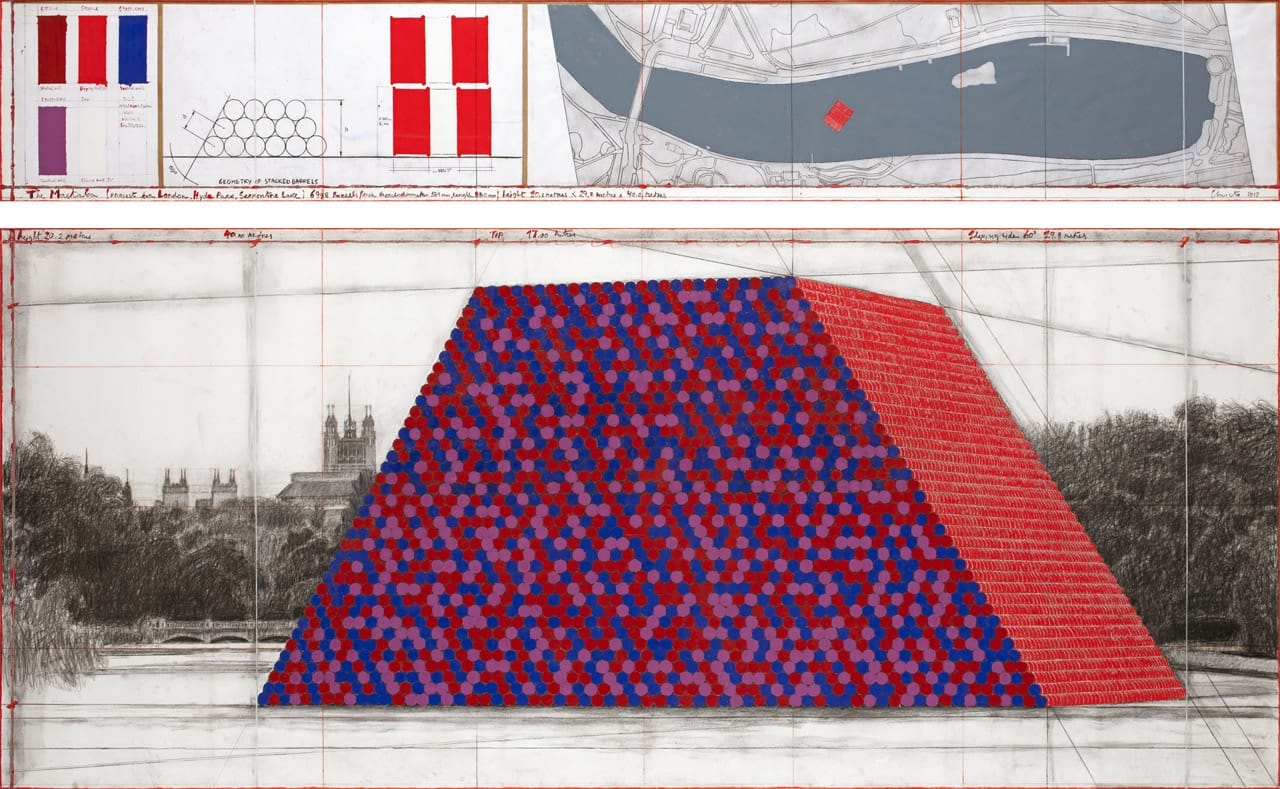 After September The London Mastaba will disappear, leaving no trace of itself or ecological impact on the Serpentine lake. All that will remain as evidence of its existence will be the preparatory prints and drawings. Christo claims that this ephemeral element gives their work a legendary character, a never-happen-again dimension that signals a braveness and for fans an urgency to try and visit. The London Mastaba is a massive, utterly purposeless, absurd, and beautifully imposing object that nobody asked Christo or Jeanne-Claude to make, but they made anyway—an apt symbol of their bizarrely meaningless yet astounding artistic mission. 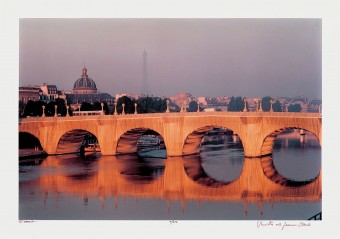