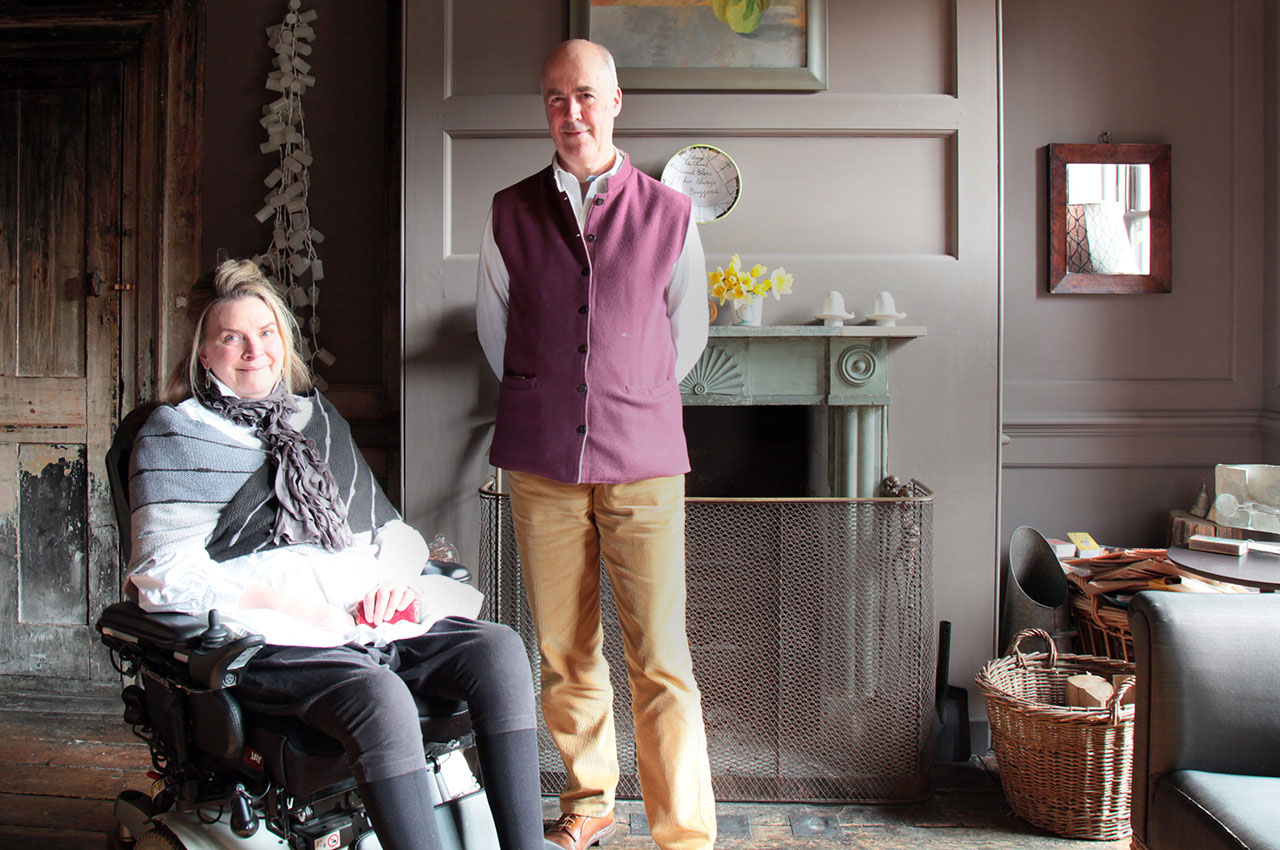 “The Grayson Perry print is probably the most valuable work in the house, so we know we can sell that if things get really bad!”

The Chief Executive of the Royal Academy in London, Charles Saumarez Smith, has had a thrilling career, with one of its highlights being his sensational campaign to keep Raphael’s Madonna of the Pinks at the National Gallery. As he shows us around his beautiful home he reveals fascinating insights into his life and how he came by his extensive art collection.

FAM: Charles, thank you so much for making time to speak with me. Could you start by telling us a little bit about yourself?
Charles Saumarez Smith: Well, I was trained as an art historian and studied at Cambridge and then spent a year at Harvard. My first job was at the Victoria & Albert Museum running a postgraduate course on the History of Design. Everyone was interested in objects and their history and I got interested in reconstructing the history of objects, what happened to them, how they were acquired by the museum and how they changed their character after acquisition. In 1989 there was a big reorganization of the V&A and I was made head of research. This meant that I was spending most of my time co-ordinating the research of others. I did that for four years but didn’t enjoy it particularly because it was a purely administrative role. 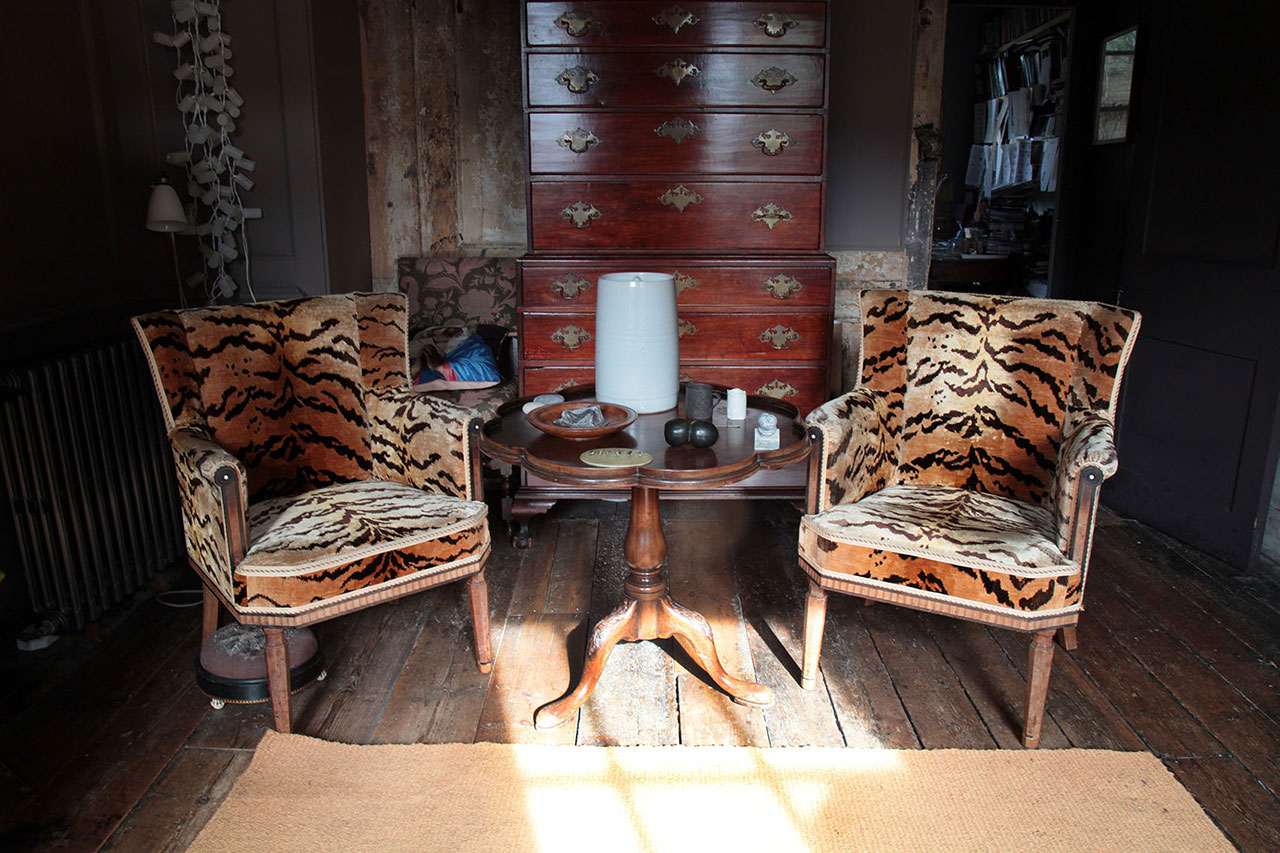 Did you organize commissions there?
Yes, there was quite a bit of commissioning and there was also the BP Portrait Award for which I was required to be chairman of the judges, and hang the exhibition. And to be honest I really had no idea whatsoever, but I didn’t make that clear (laughs)! More importantly though, I was involved in commissioning portraits—one of the gallery’s key roles. I often had to negotiate which artist the sitter wanted to be painted by. I was always of the opinion that you got a better portrait if there was some rapport between the artist and the sitter.

Who were the more high-profile people whose portrait you commissioned at the time?
The most complicated one was that of A.S. Byatt, who said that she wanted to be painted by Patrick Heron. This was because he had done portraits of T.S. Eliot and Herbert Read. We both ignored the fact that he had become a purely abstract painter. So I wrote to him out of the blue and asked him if he would consider it, and he came to lunch to meet A.S. Byatt—I think he was flattered. She went to stay with him down in Cornwall but he didn’t do a portrait. I kept on asking “What’s happening?” and she said “I’m only going down again if you come and make him paint a portrait.” So I went down and we spent a week there and I would drive her to the studio and bring them a sandwich lunch.

You used gentle coercion?
I did! On the final Thursday afternoon he painted a big, pretty abstract, but rather wonderful portrait. It transpired after he died that he had spent the last two years painting not exactly portraits, but pictures of her from memory, trying to figure out how to connect abstraction to portraiture. 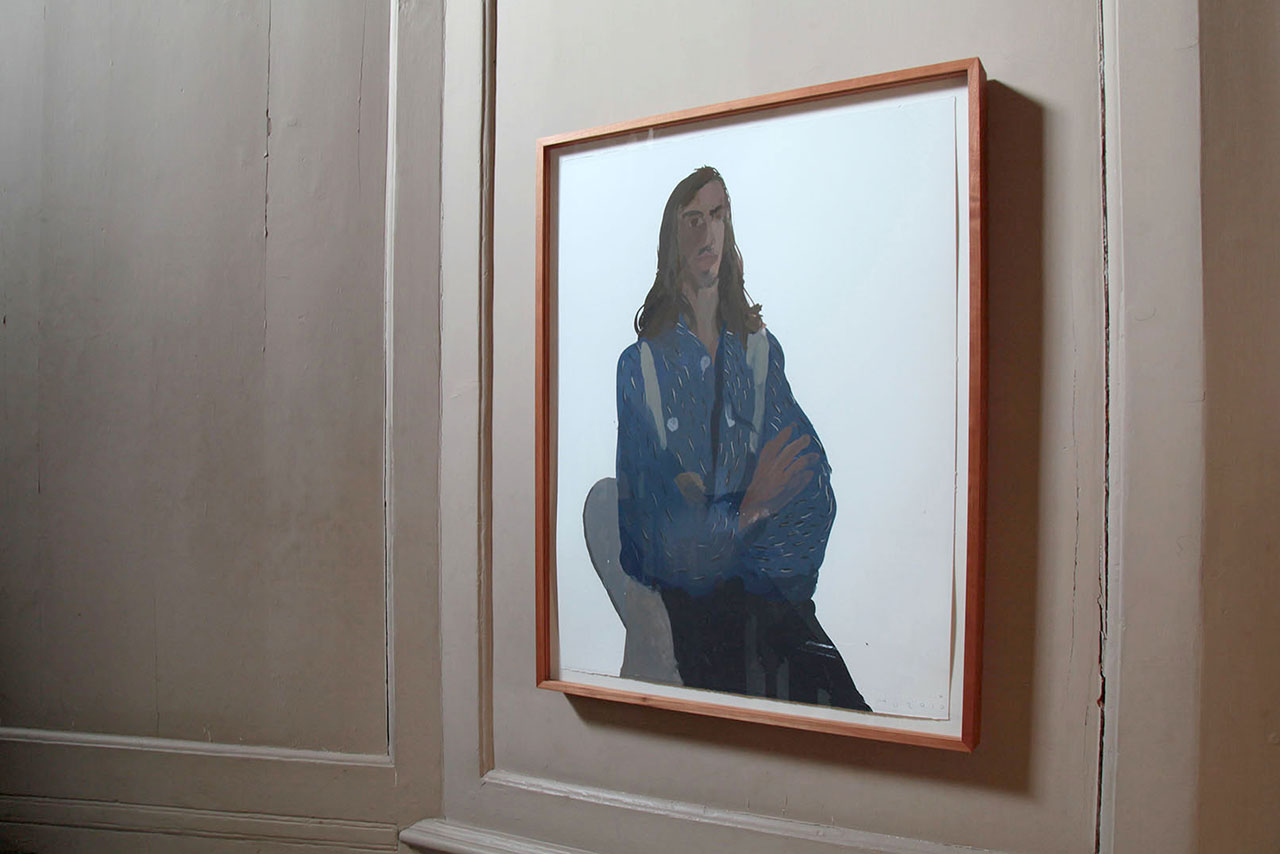 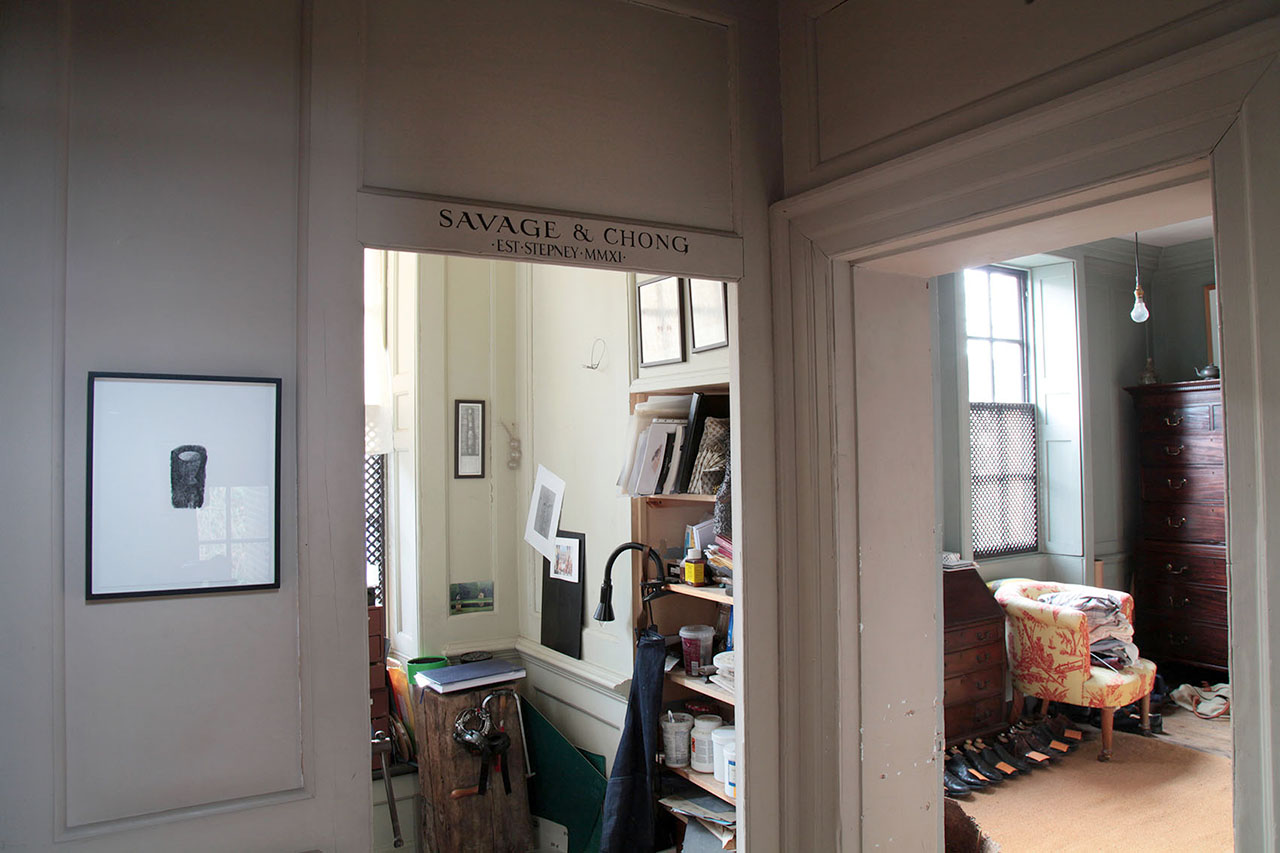 Do you remember any early influences, perhaps in childhood that made you get interested in art?
My older brother thought correctly that my parents didn’t have much interest in the visual arts and he took it upon himself to act as a surrogate father. I took a scholarship at Marlborough and I had to write a long essay—it seems odd now, as I was only 13. My brother got me to do it on monumental brasses. So I spent two years going around medieval churches all around Britain doing brass rubbing.

Can you remember the very first piece of art you ever owned?
That’s difficult. But when I was at the V&A, the Crafts Council had a shop there and I used to buy Christmas presents and one of the things I am incredibly pleased to have bought is a Phil Eglin.

Would you consider yourself a collector?
Well my wife and I never thought of ourselves as “collectors”, but over the years we’ve kind of bought things fairly consistently. We have bought quite a lot of pieces by the South African artist Hylton Nel. Of course ceramics are still not that valuable but I am very pleased we bought them. Also a wonderful painter, a wonderful person, Philip Core. He was quite a big figure in the seventies, very colorful. He was on the radio a lot. He was knowledgeable but if he didn’t know something he would make it up. 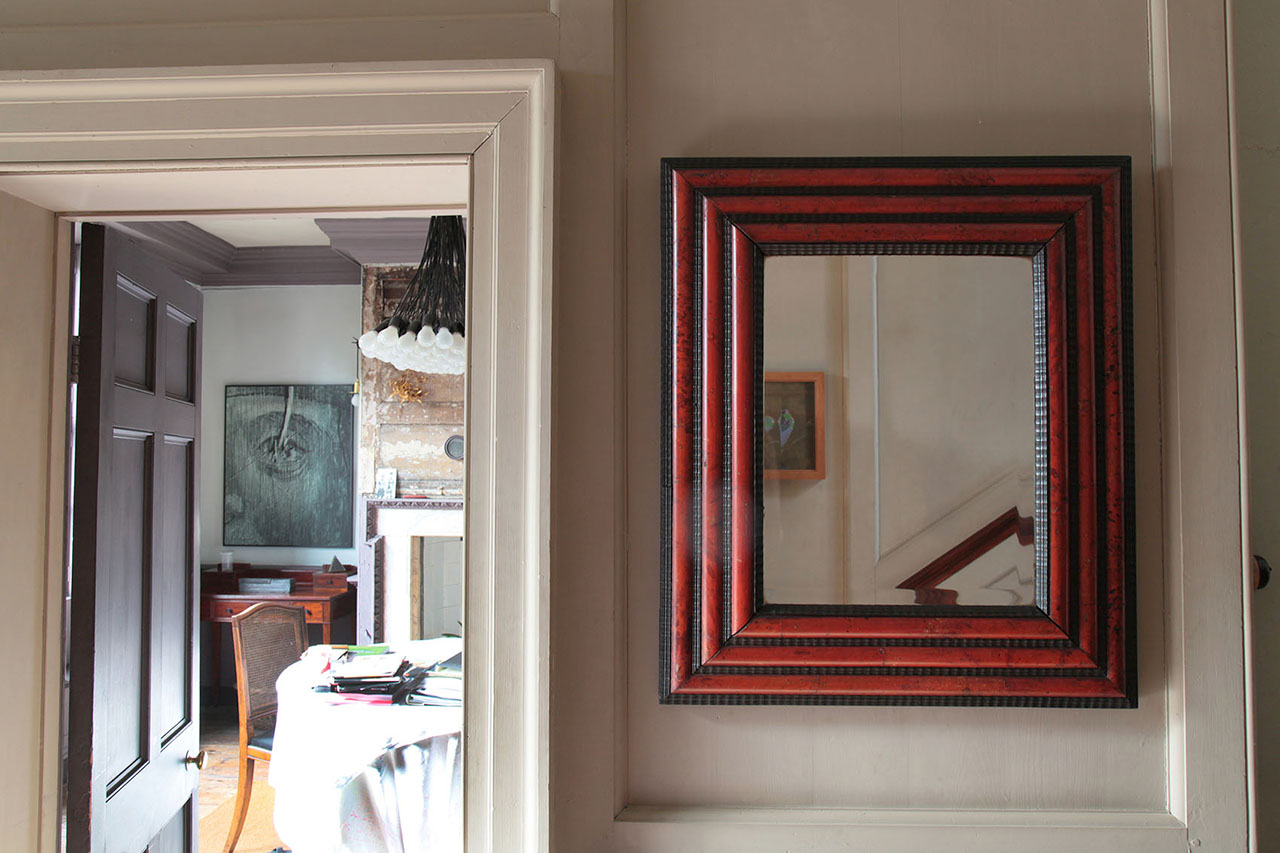 So of the works you have up in the house, could you tell me about one or two of those?
The only portraits we have up are of my sons. The rest are probably in the attic. About ten years ago, Humphrey Ocean did a portrait of our oldest son Otto. He exhibited the portrait in the RA Summer Exhibition and, not surprisingly, nobody but me wanted to buy it.

In the dining room we have three pictures by a photographic artist called John Goto, who was doing a show concerning Suffolk churches damaged by Dowsing on Cromwell’s orders. On the other side we have a small sculpture by Christopher Le Brun. I’ve known his work for a long time but was never able to afford it. When I went to the Royal Academy he had an exhibition at the New Art Centre and at the time I wanted to buy a painting but they were too large or too expensive and so he suggested I buy the sculpture, which I duly did.

Do you own any works by female artists?
We have quite a few works by Tessa Träger. Over the mantlepiece is a work by Charlotte Verity. In fact we own a lot of works by her. I also have a large photograph by Liane Lang in the bedroom.

What other works stand out?
We have a Grayson Perry work upstairs. We were at the top table when he won the Turner Prize and he made a pot with all the names of the people on his table that night. I went to his exhibition and I asked to buy it, and the response was rather dismissive—everything was already sold before the exhibition had opened! There was also a print called Map of an Englishman which I admired. Actually I love his work, the prints have a rich sense of layering and are somehow historical and not historical. That was probably my most valuable work in the house, so we know we can sell that if things get really bad! 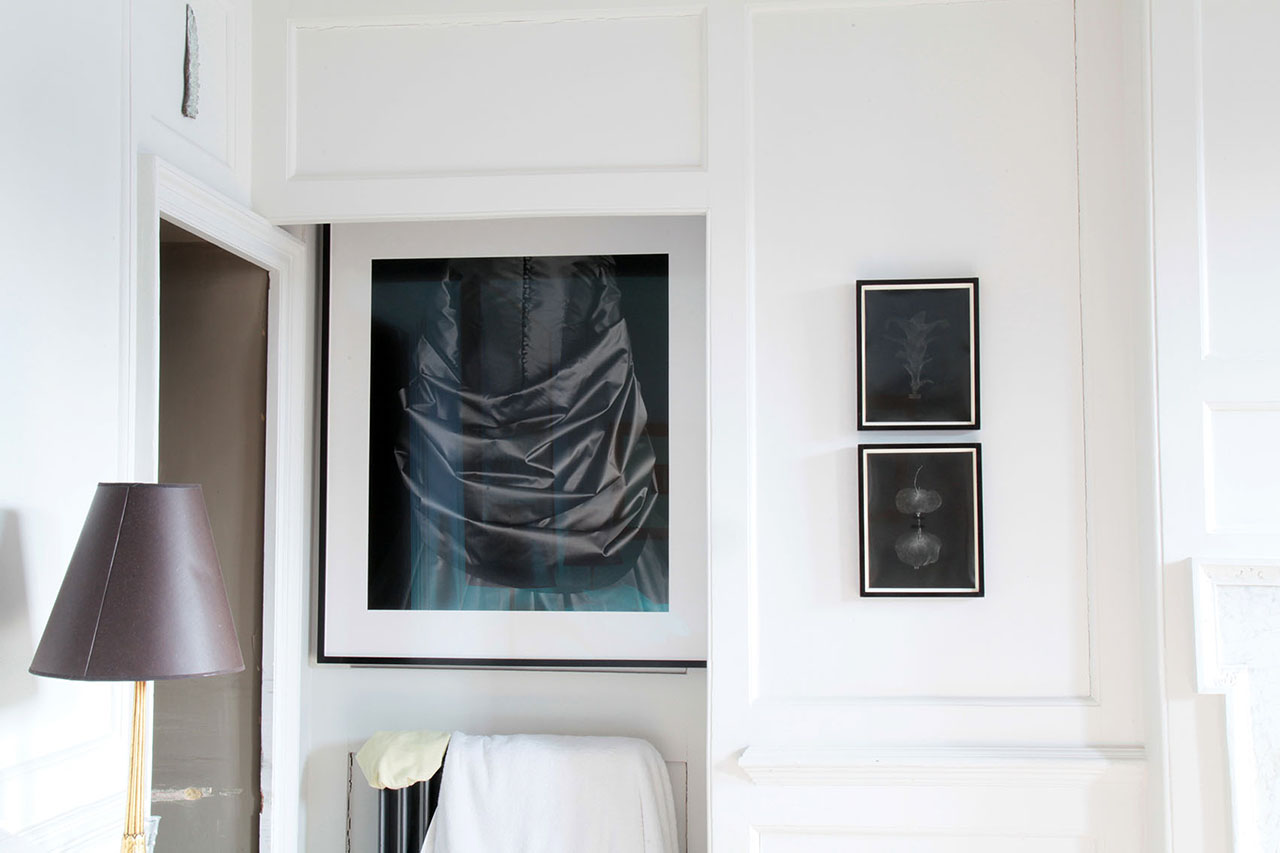 The building we are in is on the Mile End Road. Did you grow up in London?
No I was born outside Salisbury and we lived in Farnham, then outside Oxford. One of the reasons I always liked London is because my mother thought London was the source of all evil. She thought the countryside was healthy and cities were insalubrious. She had a view that walking in fresh air was essential to one’s health.

How long have you been with your wife?
We met when we were 19. And I have to say she had huge impact on my taste. Her father’s father was a furniture designer and these two 1930s chairs were designed by him for a private client who never picked them up.

You have two children. Are they interested in the arts?
Yes we have two sons, both of whom are interested in the arts though they claim we did nothing to encourage them—which is not strictly true. Our oldest son is an architectural historian working on the 1960s. Our younger son works for Factum Arte, a company that fabricates work for contemporary artists. He now mainly goes around digitally recording monuments which may be at risk of destruction. 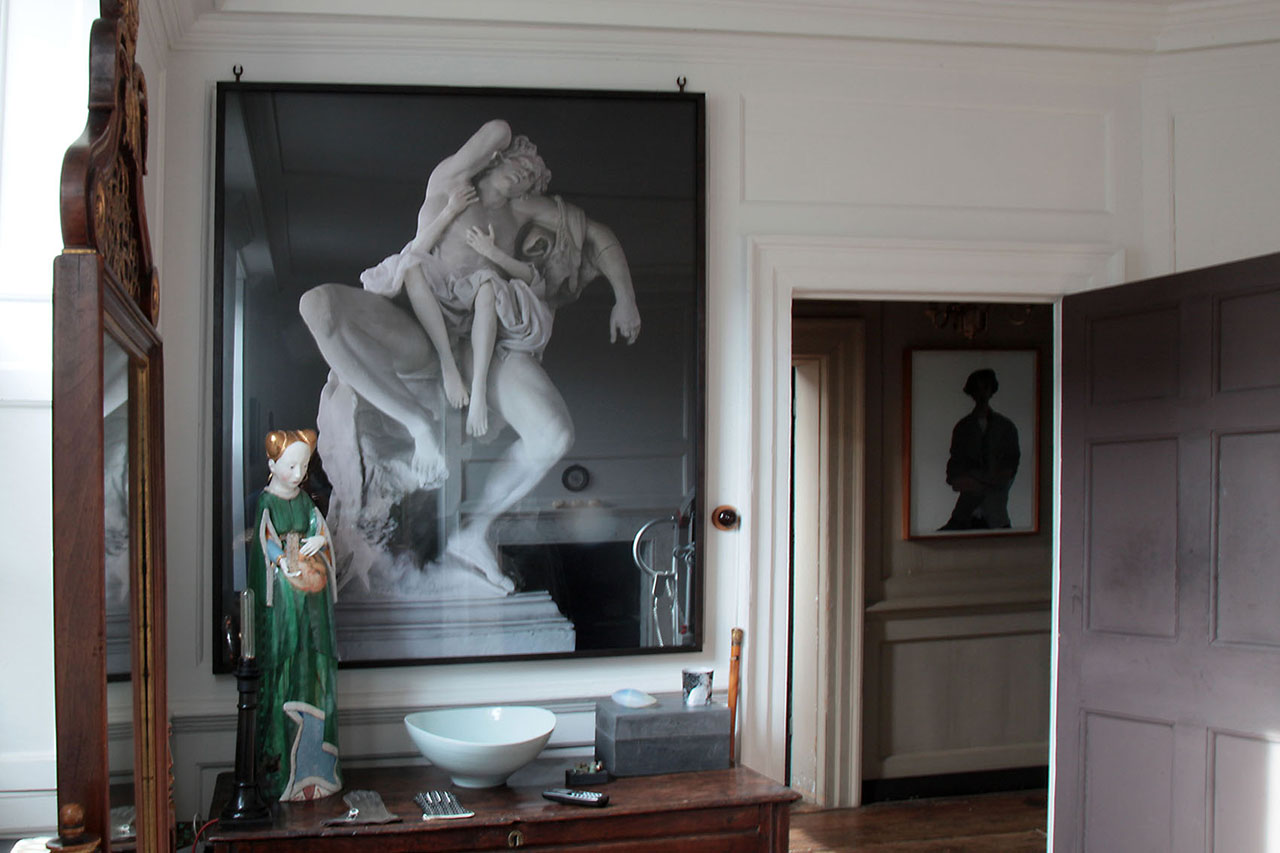 Please tell me about this beautiful house you’re in now?
It’s on the site of a much larger early 18th century house and the site was taken over by an artisan builder who built a row of houses on the road out to Essex. In the 1960s it was used to make boxes but when we knew it in the eighties it was an exhaust pipe garage and you could drive through the middle of it. The front had shops so it wasn’t at all visible as a pair of fine 18th century houses. We bought the house when it was semi-restored and Romilly, my wife, did a vast amount of work to finish the restoration. Spitalfields had actually bought both properties for £1 because the borough of Tower Hamlets didn’t know what to do with them.

I notice you didn’t restore all the woodwork in the house?
It’s an aesthetic we’re interested in, like in the work of John Goto. My wife was keen to keep what was left of the original house. She discovered the workers had replaced two old panels in the sitting room, which upset her greatly. 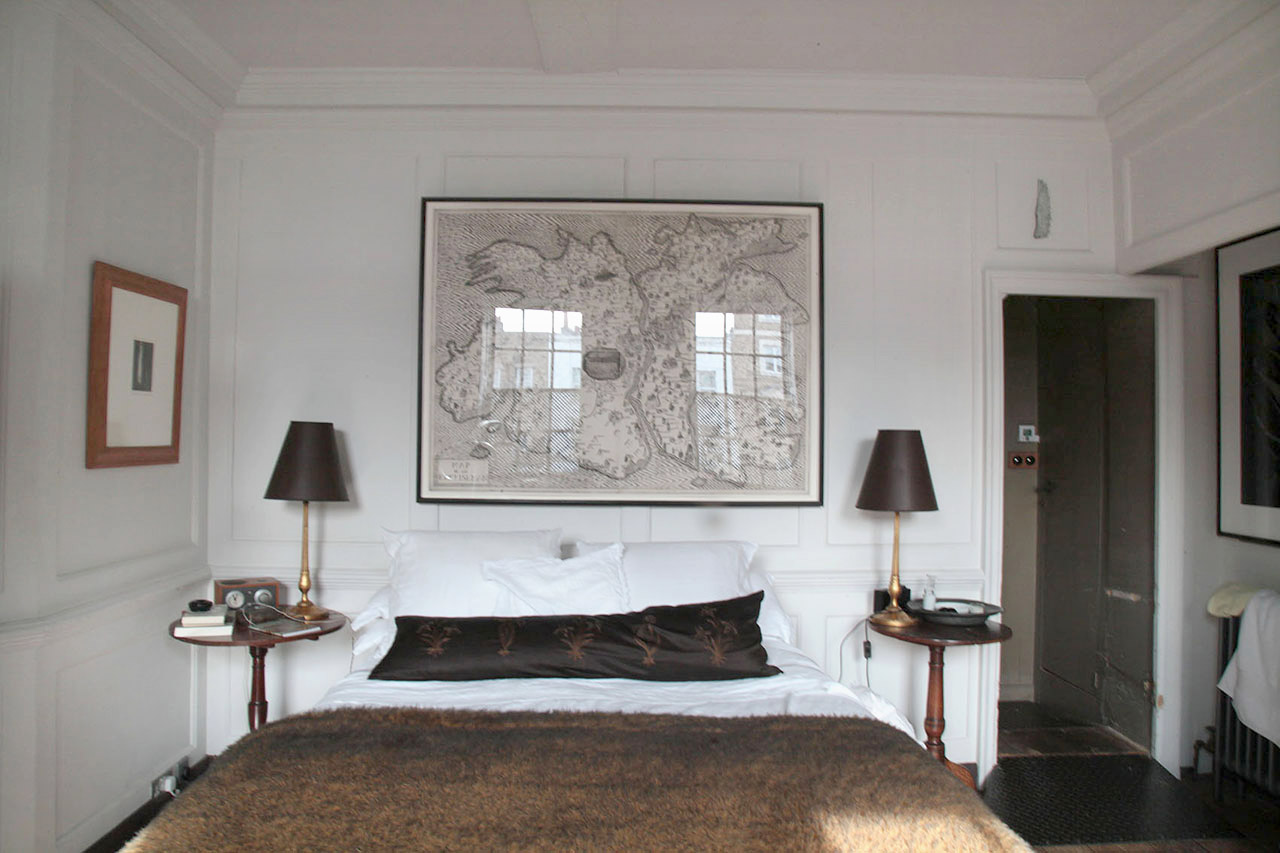 Finally could you tell us a little bit about your blog?
I started blogging about three years ago. My very efficient PA suggested that it would be good if the staff at the RA knew more about me (little did she know what she was unleashing). It makes me look at the world more carefully, as well as taking photographs on my mobile phone. Quite soon, I realised that it might be possible to make a book out of the entries about the area round where we live in East London. They will now be published by Thames and Hudson in late April and I love what Harry Pearce, the brilliant head of graphic design at Pentagram has done with it.

I try and do a post a day charlessaumarezsmith.com/blog. It’s given me the utmost pleasure, as do the comments left by friends and other readers on it as well. 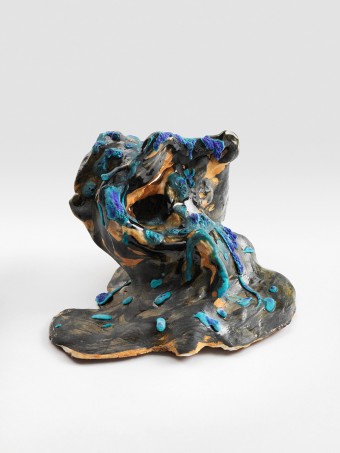