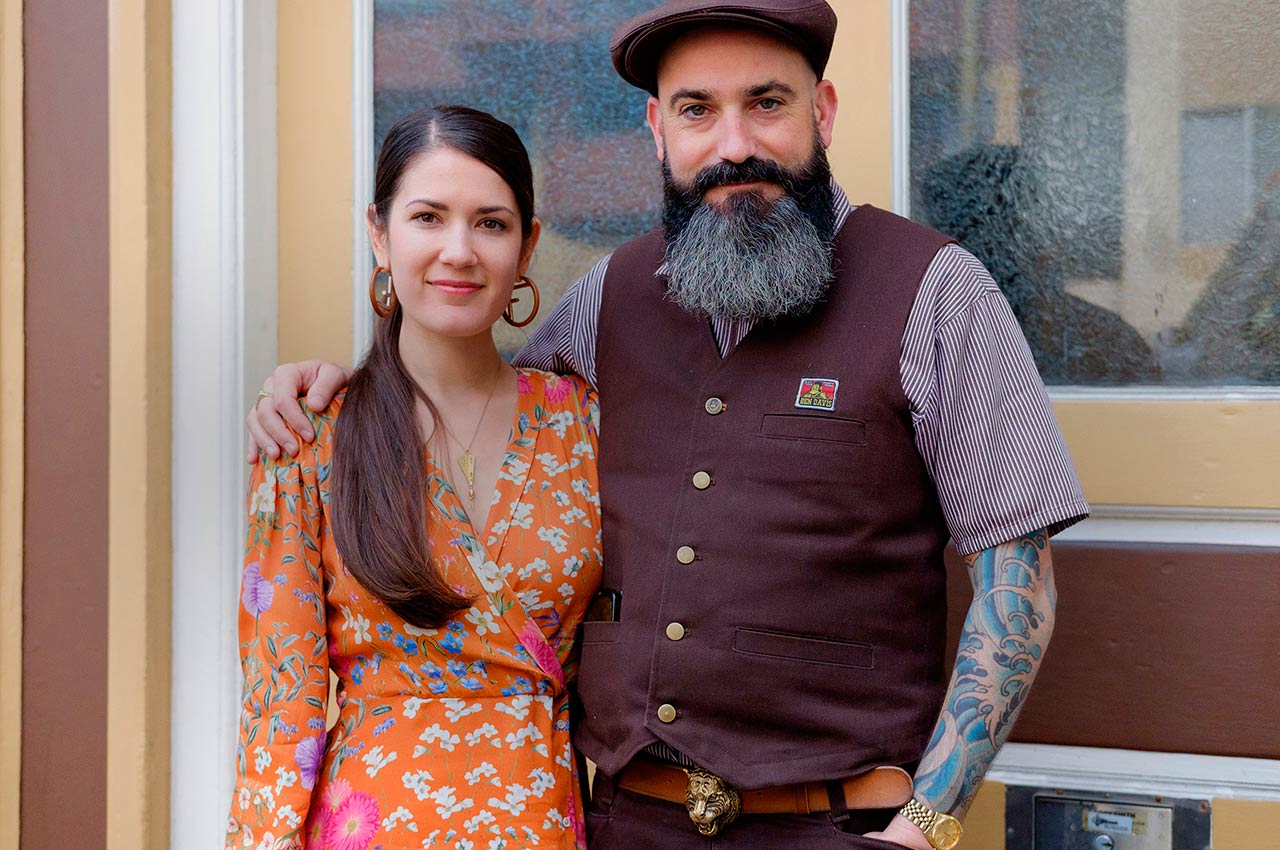 “In the event of an earthquake, we will literally be crushed by artwork!” Jayde Fish

Jeremy and Jayde Fish are the last of the unicorns. Creatives working in bustling San Francisco, the demand for space means much of their art collection is stacked above their bed. With both working from home, their place is an artwork in itself, and showcases their unique visual style. We catch them just a few months after Jayde’s collaboration with Gucci, with a joint exhibition just around the corner. 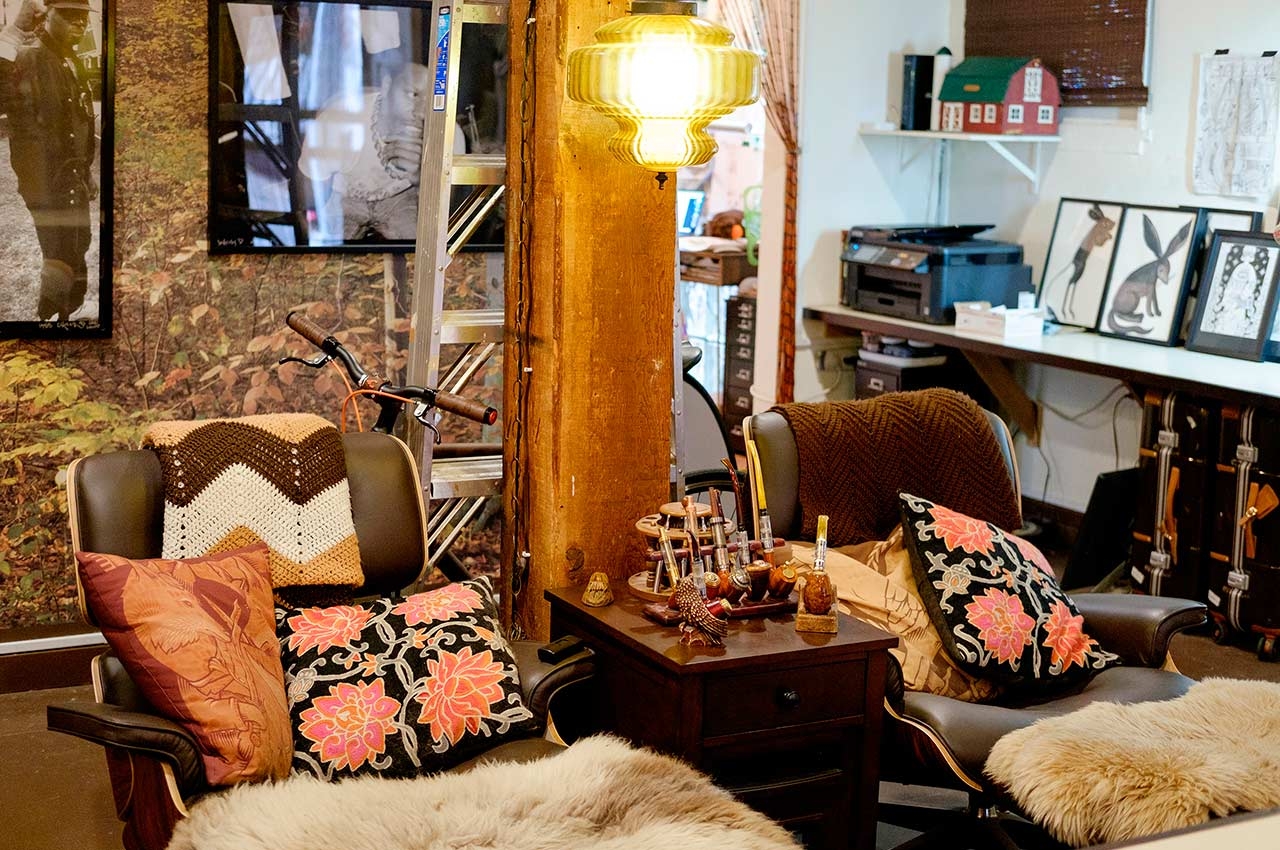 FAM: Your place is covered in art, how did you come by most of this artwork?
Jayde: A lot of our collection comes from supporting our artist friends. One time one of our friends had an art show to help with his medical bills so we participated in that and purchased things from there.

Do you rotate stuff around from storage and display it?
Jeremy: I’ve cut back over the past years just because storage is a pain in the city and our place is kind of small. It is directly over us when we sleep and it’s full of great things that are aren’t on display, which is sad.
Jayde: In the event of an earthquake we will literally be crushed by artwork!
Jeremy: There’s so much wonderful stuff up there. If you open it up and start looking, you’re kind of like oh, what a horrible way for us to go out! 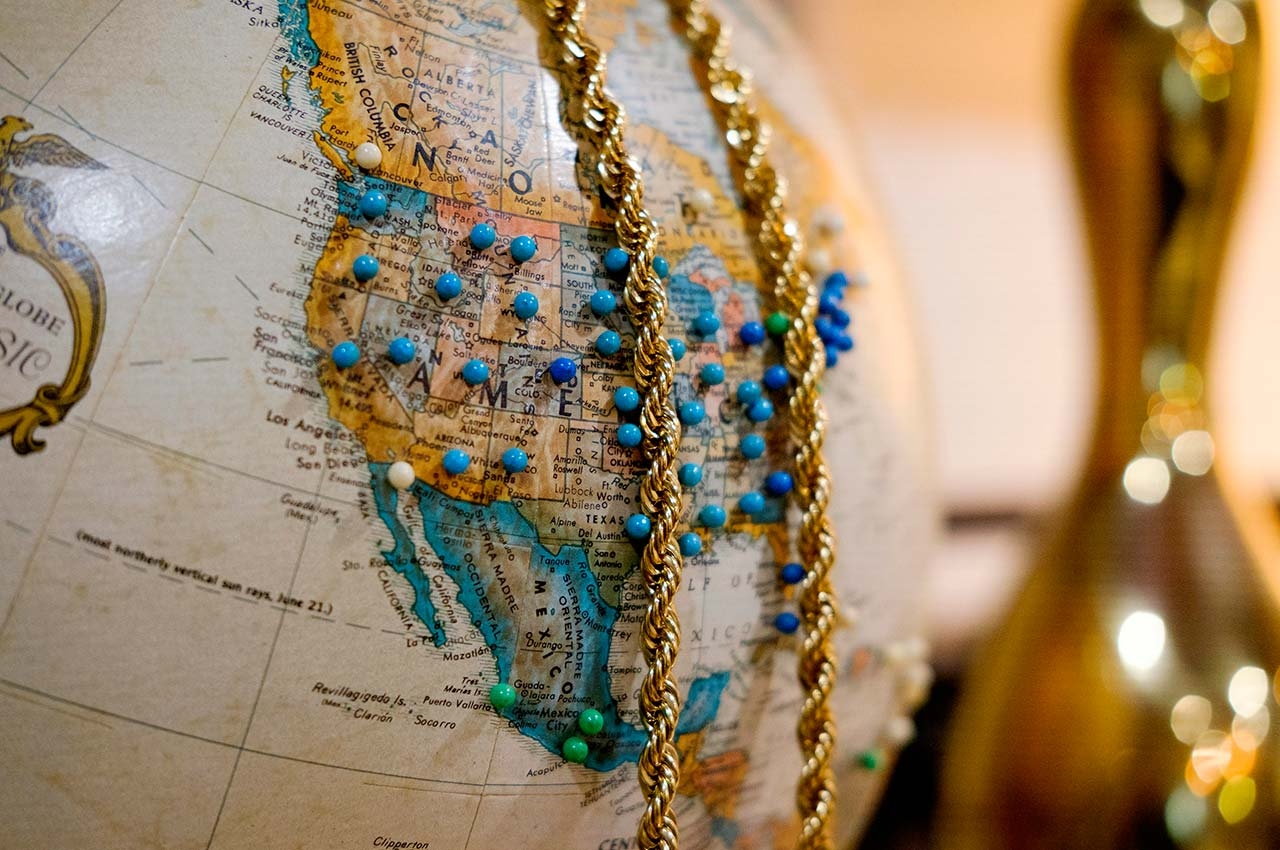 Do you ever dream about the artwork hanging over you while you sleep?
Jeremy: Dreams and nightmares both, yeah.
Jayde: It’s funny too because it’s not just hang-on-the-wall art, I have a collection of my Mom’s vintage costumes. She used to perform and I have this indigo suede cowboy outfit up there that I’ve been having dreams about.

In your opinion do artists collect differently than your typical art collector?
Jeremy: Sure. I’ve never bought a piece of art for investment value. Ever. And it’s not that I don’t understand or respect that, I’m just not in a position to. So yes, we collect differently. But it’s almost in a way that a collector who collects for investment value might find precious. Just to see the relationship artists have to other artists and what you wind up with, as opposed to having the financial ability to decorate your home with art you like.

So do you think your collection is a physical manifestation of your social network?
Jayde: Absolutely, artists we’ve interacted with, friends or both. 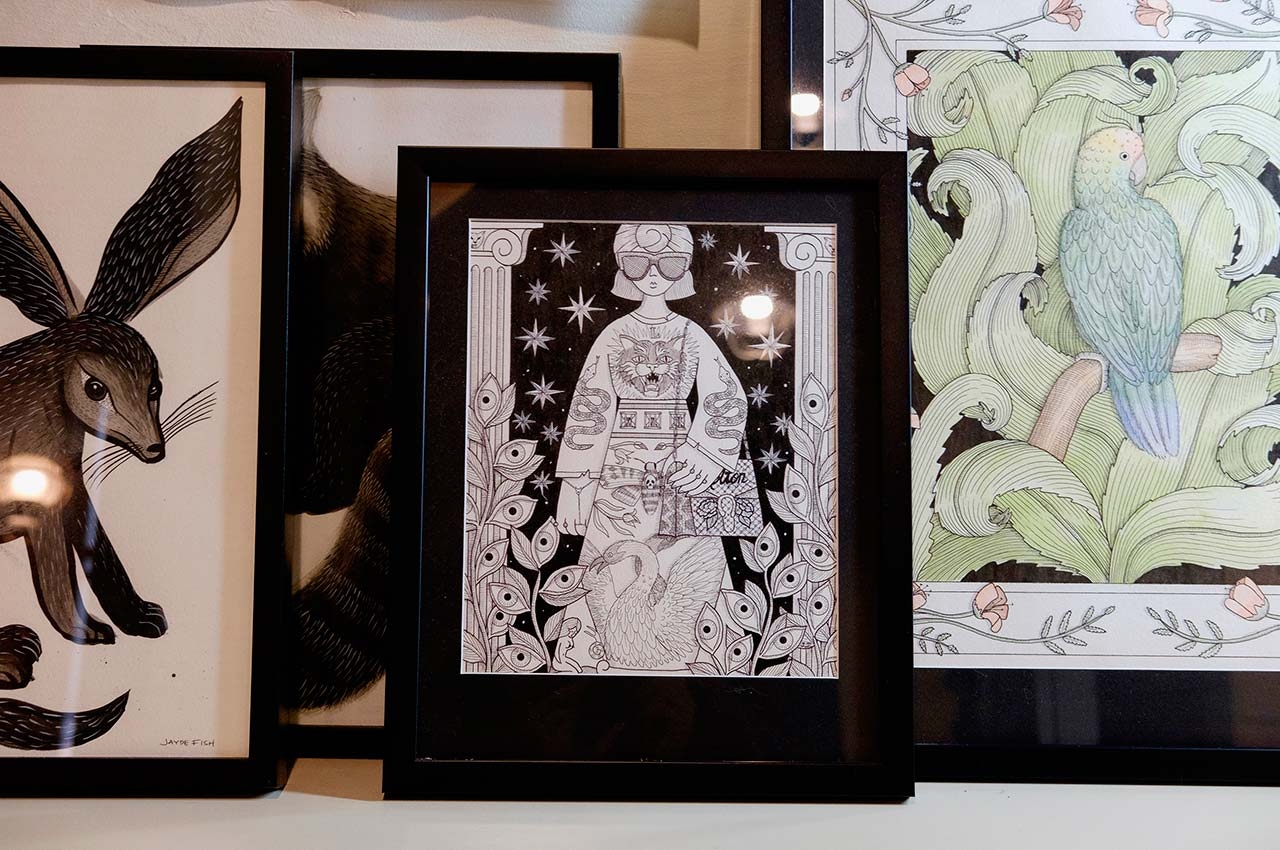 I feel that artists are natural collectors but not necessarily of artworks.
Jayde: That’s a great thing to bring up, because we have a show together at Spoke Gallery in New York in June, and our goal is to create a space that transports the viewer to our home. We don’t necessarily want it to look like a home but to look as if we curated every bit of it—the wallpaper, the carpeting on the floor and the knickknacks. We want it to feel like a cabinet of curiosities and give a sense of discovery that we’d like to think we have in our home.
Jeremy: The nice thing about this show is that we’ve agreed to make things we would want regardless. Usually I make it for someone else. 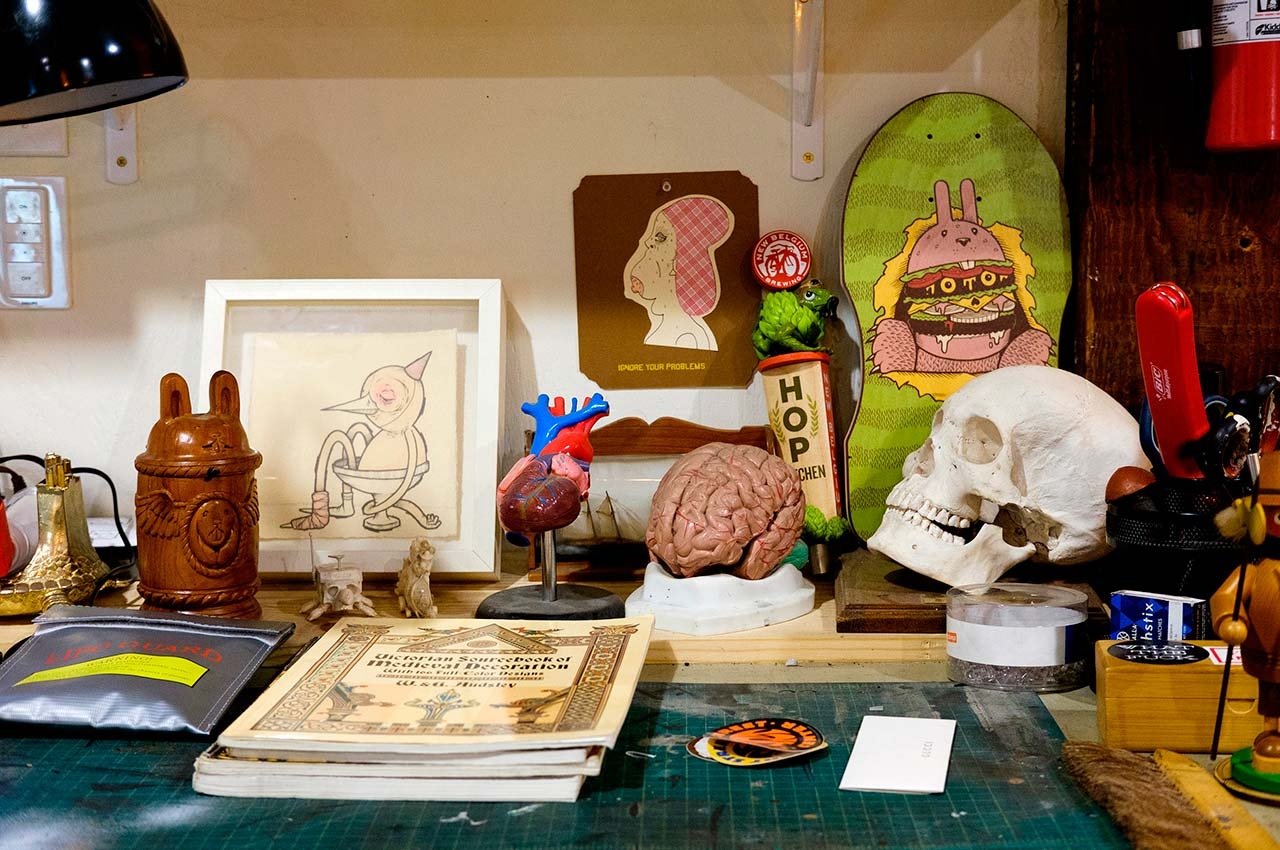 It’s interesting that there is so much attention on the artist’s home, especially in the last two centuries, when the identity of the artist is so wrapped up in the art.
Jayde: Especially in this city where sometimes with some artist friends we wonder, how do they get by? Do they have really good rent control?
Jeremy: Or are they just really good with using space. I have a lot of friends that lived in Manhattan in the late 90s and early 2000s that made art in very tiny spaces and that dictates the kind of work you make. Whereas in San Francisco the apartments are a little roomier, but at this point per square foot it’s more expensive here which is crazy. This might be interesting for readers around the world because as much as the technology coming out of this city has enabled this conversation, our city is tiny—it’s only seven miles square and it’s packed as hell. For visual artists who are not working in tech, it’s a tough city to make it in.

It seems like style and fashion are an important avenue of expression for you both. Can you tell me more about the contents of your closet and what influences your style?
Jayde: I call my style “Spicy Grandma” because it’s largely influenced by the past. I love vintage, mixing eras, patterns, textures, until I get something that makes me feel like myself. Sometimes my outfits are a bit on the costumey side, because one of my favorite things to do is dress up, it brightens my mood. My mom was a theater performer and so much of my childhood was spent playing in costume closets.
Jeremy: Jayde is a big influence on my style. My Friend Al Ribaya is a tailor, and he makes most of my clothes. I also wear a lot of Ben Davis brand clothing from San Francisco. Jacob Davis was the tailor who designed the first pair of riveted jeans for Levis, his family still runs Ben Davis to this day. 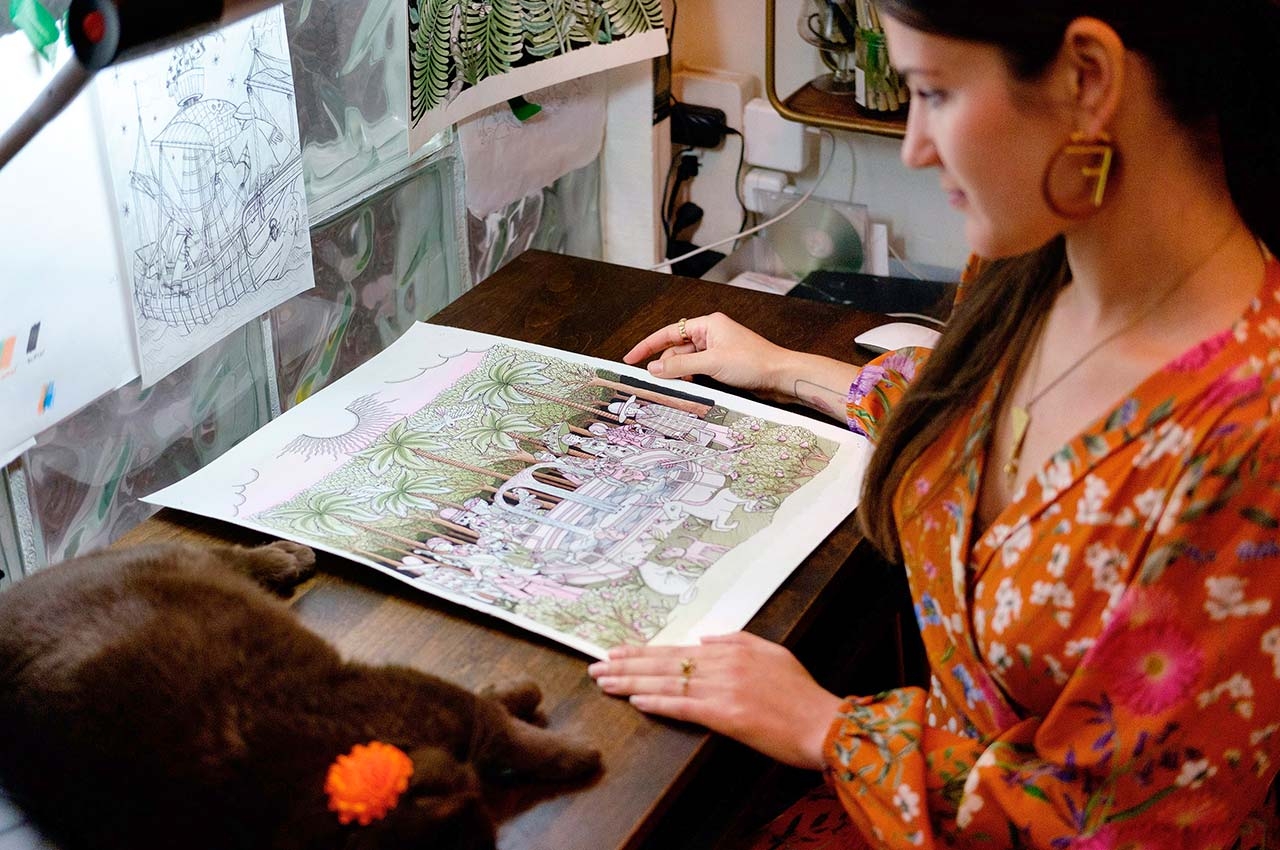 What is the most unique piece in your collection?
Jayde: In this room I love the drawing that a friend made as a wedding gift for us, which shows Jeremy as a Pizza, because we live in Little Italy and he loves Pizza. That’s me holding on to his beard. Another one of my favorite things is Jeremy’s grandfather’s wooden ship that he made. Just getting that here was a tricky situation. I never met his grandfather, but he and Jeremy look a lot alike and he learned all his woodcutting techniques from him.
Jeremy: My grandfather was quite the collector himself. He had a whole room full of guns, pipes, and fishing poles, which I always found a bit extravagant as a kid, but it must have impressed me because I try to emulate his collecting now.

What is it about collecting art that’s so gratifying?
Jeremy: I’m not sure! The satisfaction of knowing you are able to acquire? To know that you’ve done well in life and you have a massive collection of art from artists you admire? If I had a lot of money and could collect like that I think that would be how it would make me feel.
Jayde: It also symbolizes experience. You’ve been able to travel and find art, which requires time, effort and knowledge.

And what about this series of black and white photos?
Jeremy: Those are by Ricky Powell who was the tour manager for the Beastie Boys as well as a pretty reputable street photographer. I wound up with them because he exhibits with my gallery here in San Francisco and I found them in storage and hung them up here while they’re in transit. 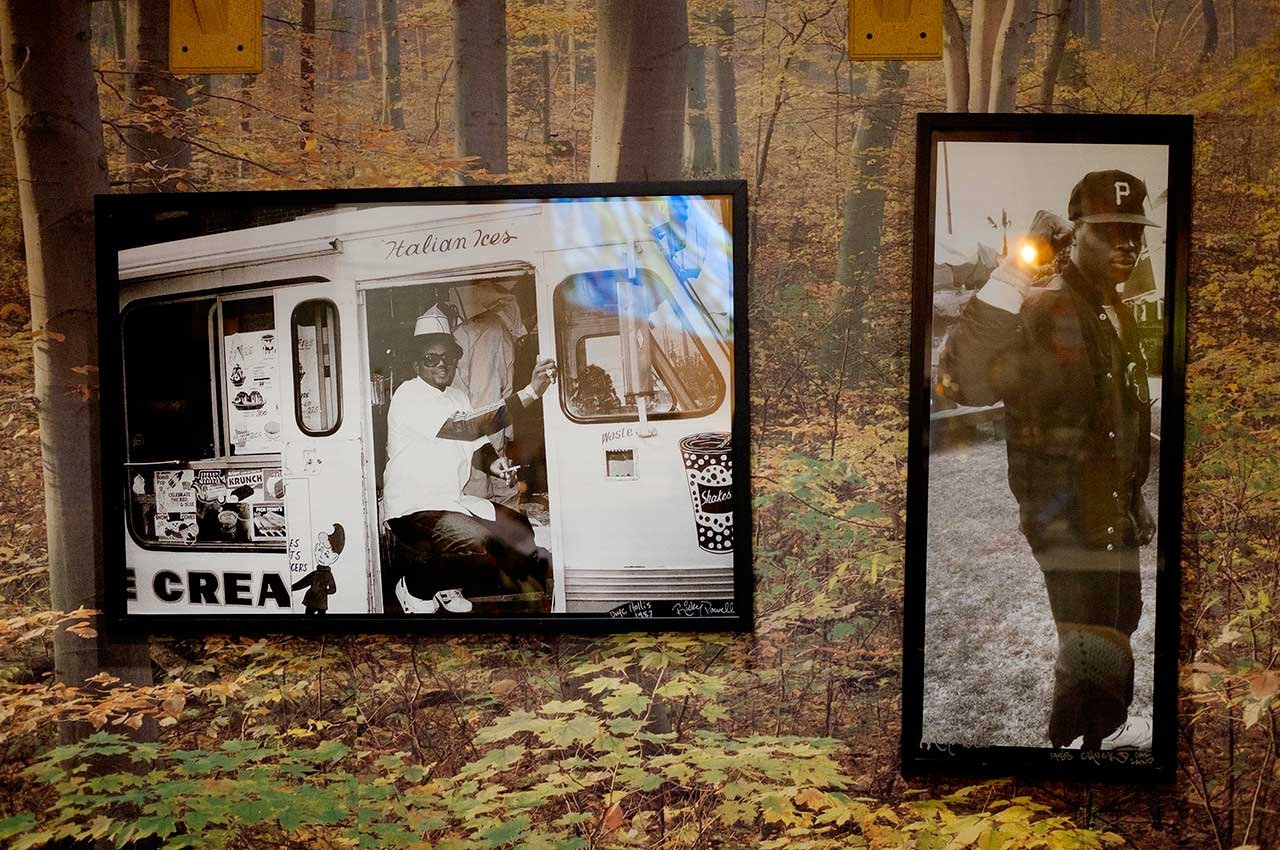 So they’re on loan! What will hang there when they’re gone?
Jeremy: Nothing! We love that wallpaper of the woods, it was here when I moved in. When I found this apartment it was way stranger than it is now.

Jayde I know you’ve recently done some artwork that were featured on Gucci clothing, what was it like seeing your work outside the art world?
Jayde: Well it’s really what I’ve always wanted to do, I studied textile design, and color theory in school because I thought I wanted to do textiles. But the textile industry seemed so foreign to me, so I started taking street style photography and started having appreciation for higher end brands. When Gucci approached me it was a dream come true. I didn’t even see the final product until the day of the runway show so I didn’t have time to absorb the information! 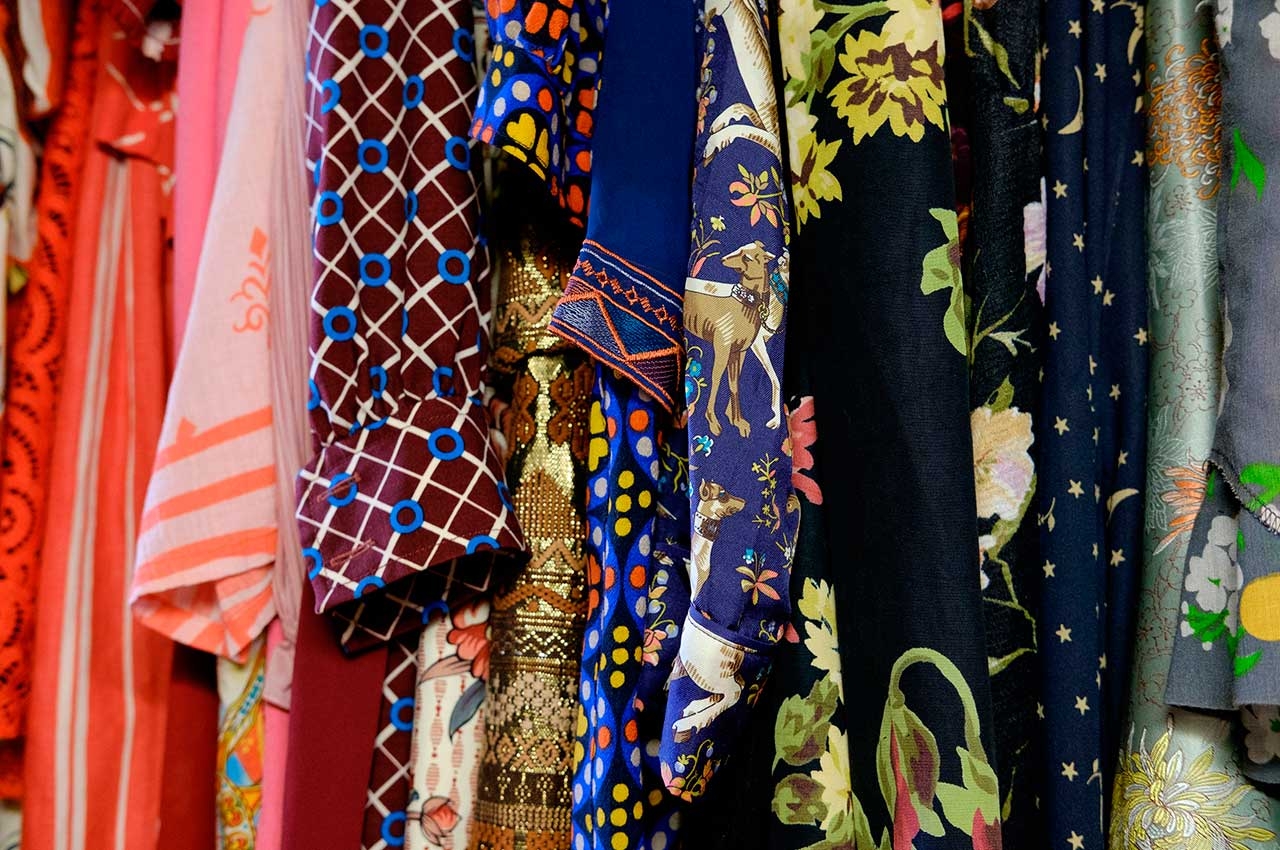 I see that the tech industry has definitely homogenized San Francisco to a certain degree, but on the other hand there have been great additions to the art scene like the Art Book Fair. How do you think artists can best be supported in the Bay Area?
Jayde: It’s awesome to see tech companies support the arts, we would love to see more of that. San Francisco was once thought of as being a very colorful and eccentric scene, and we think the success of the tech industry should add fuel to the creative fire.

If you two could be joint mayors of San Francisco for a day, what would you do?
Jeremy: I would make it so you must be a San Francisco resident to drive Uber and Lyft in the city limits and I would eliminate Air B-n-B entirely to free up more affordable rental housing. I would give all the homeless citizens executive positions in major tech companies. Ban electric skateboards and Segways entirely. Finally, I would make a holiday to celebrate the burrito.
Jayde: I’d make a documentary about Jeremy being mayor for a day!

Don’t you think San Francisco artists don’t call themselves as such, and hang out at places like West Coast Craft and in the fields of design and architecture?
Jeremy: No, actually I think it is the opposite. There are loads of people in San Francisco with full time jobs, or family trust funds, who claim to be “artists” because they have a hobby room in their apartment, or like to draw occasionally. The few true full time artists I know that still live in the city limits are proud to call themselves such.
Jayde: It does seem like today’s artist is also an architect, designer, stylist, etc. Doing whatever they can do get by financially.

What do you like about being artists in San Francisco? Do you think it’s different than other places?
Jeremy: There’s a huge tradition of art here and we’re the last of the unicorns. I don’t just mean us specifically, but us and a couple thousand other people. This is a city that the whole world has recognized since the 60s as a center for publishing, poetry, visual art—think of rock posters, Bill Graham and the Fillmore West. There’s a lot of art history that happened here and that’s changed considerably, within the city limits there’s just a fraction of the artists that were here even five years ago. Traditional visual artists who haven’t applied to some tech-related skill set must be very fortunate indeed. 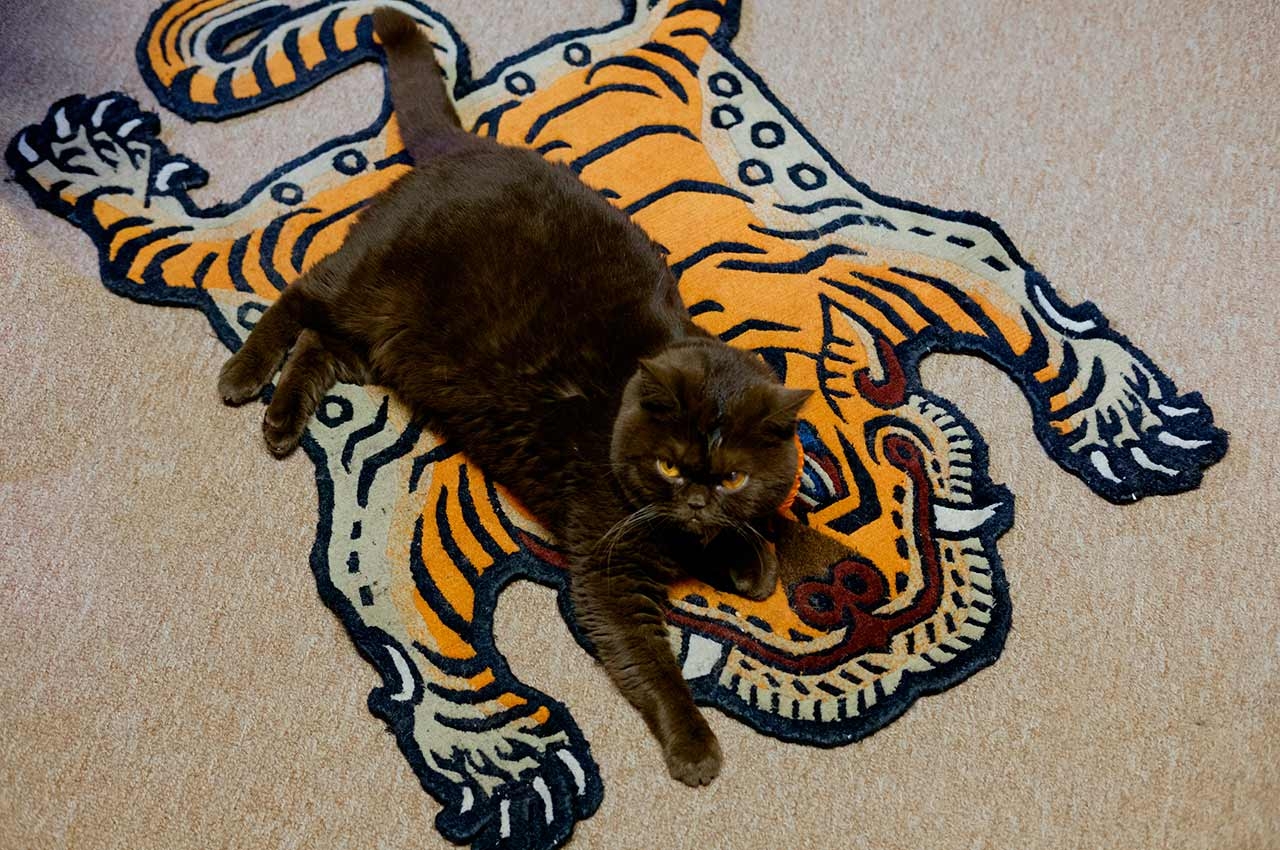 Jayde: I always thought of San Francisco as being a very open place, because of its role in the 60s counterculture and later the gay rights movement. My parents had wild times here and I grew up hearing stories of their late nights, mutton chops, and vans. It gave me this idea of San Francisco as this dream place where magic happens. So I always gravitated towards this city. The natural landscape we have here is so incredibly striking and both of us get incredibly inspired by nature, so living here helps us out in our work. 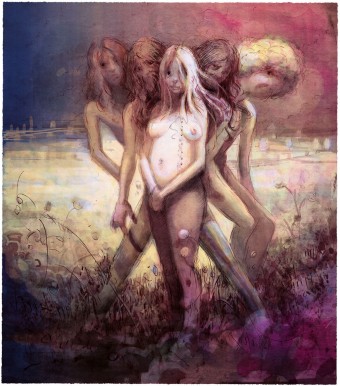