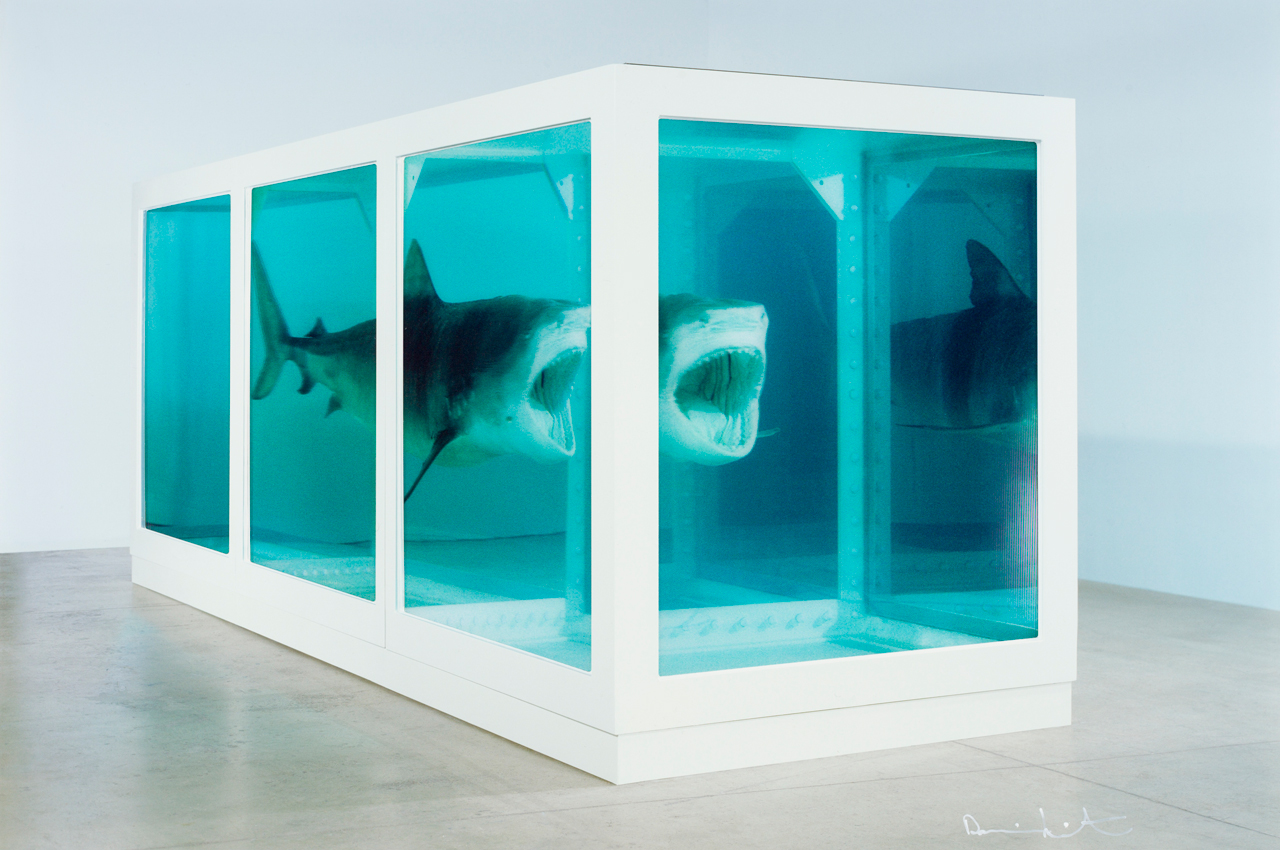 Damien Hirst, The Physical Impossibility of Death in the Mind of Someone Living, 2013, Lenticular print. Courtesy: Paul Stolper, London
Review — 5 years ago

Damien Hirst’s Pickled Animal Works may not be Leaking, but they Continue to Inspire Controversy

Damien Hirst is rarely ever out of the papers, but on this occasion it seems that the enfant terrible of contemporary art does not deserve the attention, the scientific paper alleging that carcinogenic fumes have been leaking out of his formaldehyde vitrines has been fully retracted.

The scientific paper published in the journal Analytical Methods in 2012 claimed that Damien Hirst’s formaldehyde animals may pose a risk to the public due to tiny quantities of gas escaping from the tightly sealed steel and glass vitrines housing the vast quantities of formaldehyde and water. There were further unsubstantiated suggestions that Damien Hirst himself may have even been involved in suppressing the findings of this study. However, Gareth Harris, writing in the Art Newspaper, has now claimed that the report is “inaccurate and unreliable”.

The report concerned Hirst’s infamous series of works he calls his National History series, an intention he had to create a “zoo of dead animals.” The first in the series, The Physical Impossibility of Death in the Mind of Someone Living, 1991, (pictured) is now not only the work most commonly associated with the artist, but has become one of the most celebrated, reviled, and iconized sculptures in popular culture. The work posed fundamental questions about the fragility of biological existence and the vitrines that are now under such scrutiny, were intended to provide both a window and obstacle to the audience, seducing them into the work as well as objectifying the animal within it.

The work was funded by collector Charles Saatchi in 1991 for £50,000—then a huge sum for an unheard of artist. In 2008 the work was then sold on to an American collector for $8 million, however, media attention at the time was less focused on the increased selling price but on the fact that the Tiger Shark, sourced from Australia, was dying a second death as it decomposed in the formaldehyde vitrine. The liquid by now was so murky with organic particles it was difficult to see the shark. Hirst blamed this on the Saatchi Gallery who had added bleach to the formaldehyde solution. Its advanced stage of decay was counteracted by Hirst who replaced it with a fresh specimen paid for by the new owner.

Damien Hirst, The story behind The Physical Impossibility of Death in the Mind of Someone Living, 1991. Courtesy: Channel 4

Damien Hirst’s company, Science Ltd., now offers to replace any animals from his Natural Science series after each ten-year lifespan. Such a commitment brings up fascinating questions about the nature of originality in art and the notion of mass production. For Hirst the seriality of the animal within becomes part of an artistic process, which then renders the idea of uniqueness obsolete. Replacing the shark should not be seen as altering the original but—according to Petra Lange-Berndt, writing for the Tate’s Replication and Decay in Damien Hirst’s Natural History—should be seen as a “remake”. Lange-Berndt goes on to say that the “original frame and concept and a similar shark, these do guarantee—not authenticity—but rather a continuity of the performance.”

Although Hirst has remained uncharacteristically silent after the leaking allegations have been proved to be untrue, he has publicly acknowledged the “big dilemma” controversy that arises from replacing the animals in the Natural History Series: “Artists and conservators have different opinions about what’s important: the original artwork or the original intention. I come from a conceptual art background, so I think it should be the intention. It's the same piece. But the jury will be out for a long time to come.”

Despite growing alarm about the best way to preserve conceptual works made from organic matter and the substandard paints and materials used by the YBA movement, the art critic for Bloomberg, Martin Gayford has gone on record to say “My take on it is to ask whether you regard the piece we are talking about as a work of art or as an idea. It seems to me that if Hirst finds a new shark and has it pickled and it looks right to him then that’s fine.”