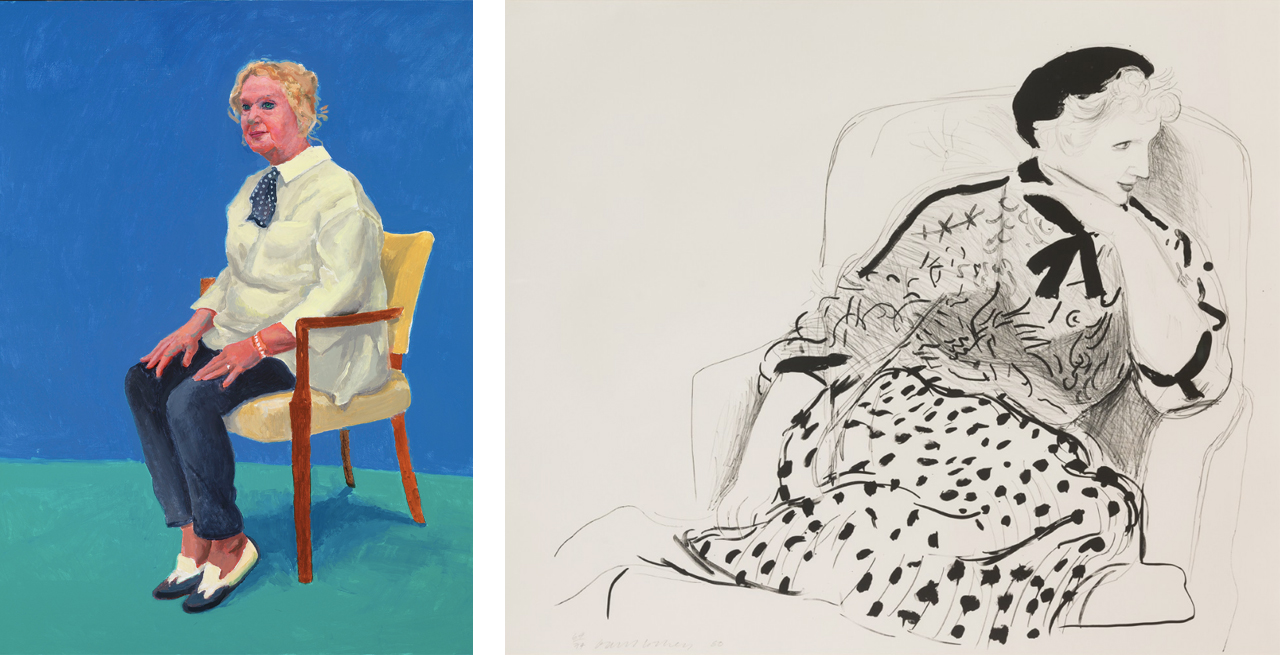 David Hockney's muse Celia Birtwell, the north English textile designer, not only figured in one of his most famous paintings but over five decades has held a constant presence in his work. With Hockney’s current show on now at the Royal Academy of Art in London, his portrait of Birtwell has been described by the art critic Tim Barringer as one of the “most vibrant works in the present exhibition.”

There is something touching about this latest portrait of Birtwell and her measured, distant stare, the ball of her clad feet slightly raised above the ground and her hands resting on her knees. The portrait is in marked contrast to the leisured sitter in Hockney’s lithograph from 1980, that captures her wholesome, lively beauty. In many ways Hockney’s latest exhibition is a gentle meditation on time passing and features many of his old friends—not just Birtwell, but also the artist John Baldessari and the banker and collector Lord Jacob Rothschild.

Portraiture is the format Hockney returns to most often, and nearly always at times of real heartbreak, notably during the AIDS epidemic and after the breakdown of serious relationships. It is among the most technically demanding of genres and Hockney’s sitters have to follow strict codes of practice. They must remain silent, and nearly always sit on simple everyday chairs that are placed on a podium. To begin with, Hockney makes charcoal sketches and once he decides on the sitter’s pose a studio assistant draws around the sitter’s feet to help them find their position again.

Hockney’s most famous portrait, and one of the Tate’s most viewed paintings, Mr and Mrs Clark and Percy, 1971, is an intimate and relaxed portrait of Celia Birtwell and her then husband, the fashion designer Ossie Clark. Hockney simply stated: “my aim was to paint the relationship of these two people.” However, the marriage depicted in this painting did not end happily, with Ossie Clark drifting into substance abuse and eventually dying in 1996, while Birtwell achieved international success as a designer.

Birtwell began her studies at Salford School of Art in 1956 and quickly established herself as one of England’s most promising young talents. She has been described as being the face that “launched a thousand prints” and her career made her the toast of the swinging sixties bohemian crowd and found her dress the Beatles and Rolling Stones. After the breakup of her marriage, Birtwell gave up designing to concentrate on teaching and raising her family, but it was on the insistence of Hockney that she decided to return to designing again in 1984. Hockney does not have many close female friends outside of his family, but has remained very close to Celia—when together they just “laugh and laugh”, despite the fact that she is often unhappy about “the way (he) paints her.”

For the Royal Academy exhibition “David Hockney RA: 82 Portraits and 1 Still-life”, the artist was intent upon finishing each work within three days and intended to exhibit them all as one single work. The speed with which the artist worked is plain to see with Hockney fascinated in how much effort is needed to obtain a good resemblance. Despite this time deadline Hockney’s virtuoso handling of paint enables the personalities to leap off the canvas. His continual reworking of Birtwell and other close friends produces a kind of extended family album, an astonishing reflection of an artist’s ever-changing practice.