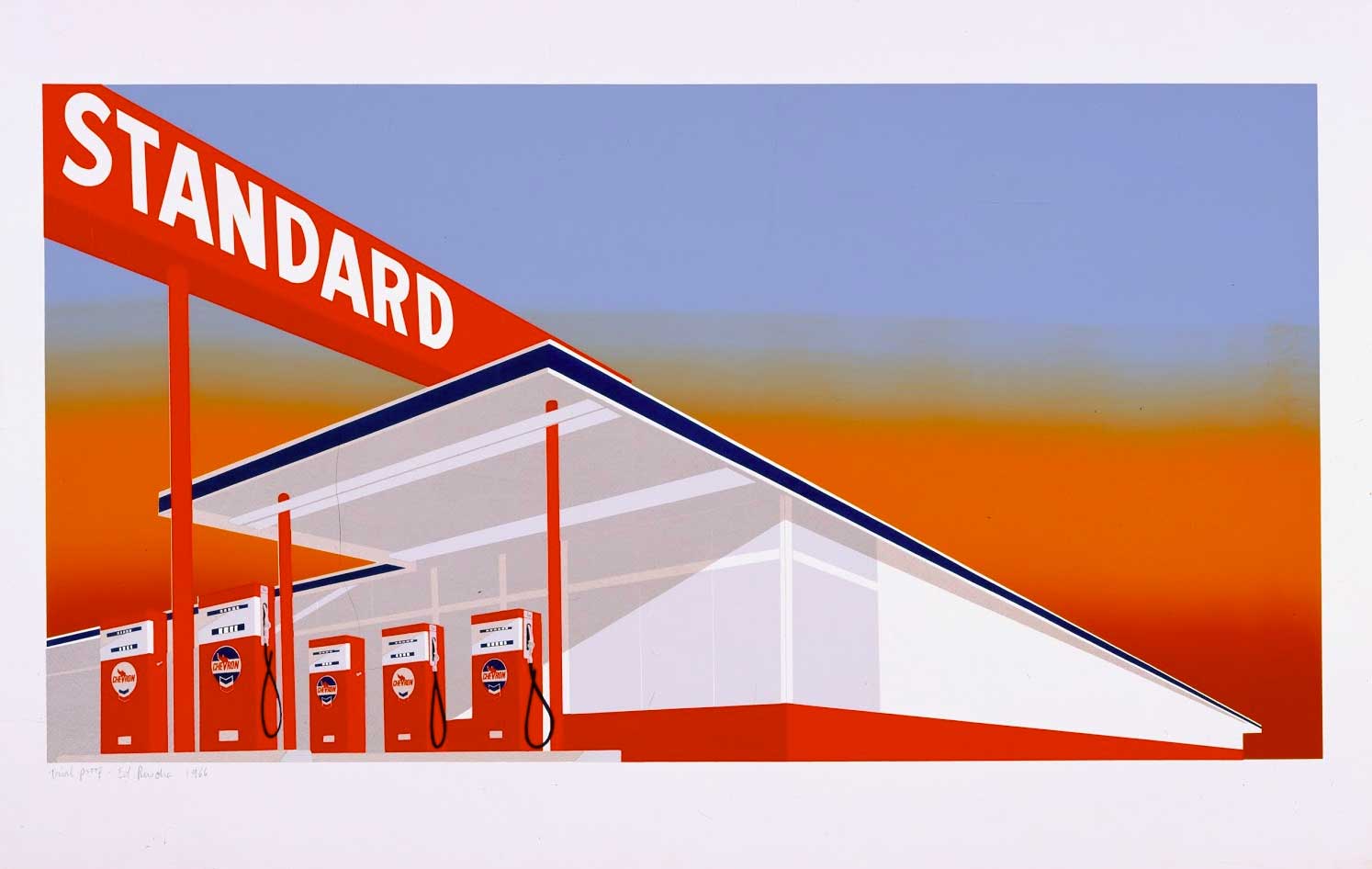 Sixty years ago a young Ed Ruscha packed up his Ford Sedan and set off towards Los Angeles. The year was 1956 and as he hurtled down Route 66 the artist was seeing for the first time the gas stations, telephone poles, and great asphalt expanses that would form the bedrock of much of his work and alter forever the way the American West viewed itself.

Now for the first time ever Ruscha’s romantic and iconic depictions of West America have been brought together and are being exhibited at the Fine Arts Museums of San Francisco. This is the first major show of the artist’s work at the Museums in 15 years and will draw heavily from the institution’s collection of Ruscha’s work. In 2000 the Fine Arts Museums (comprised of the de Young and the Legion of Honor) acquired each limited edition published by Ed Ruscha as well as a staggering commitment to receive all the limited editions of his works to be made in the future. This has now increased to over 450 pieces.

On arriving in Los Angeles aged 23, Ruscha was immediately taken with the city, the endless sprawl, the outdoor stairways of two story apartment houses, the billboards and vast sunrises and sunsets. He took a series of skanky apartments in the Hollywood area and some low paid jobs in restaurants to make ends meet. He had already secured a place at Chouinard Art Institute (CalArts), the tuition being covered by his parents.

It was while living in Los Angeles that Ruscha began painting works such as A Particular Kind of Heaven, (pictured) which capture Ruscha's unerring ability to harness the simple immediacy of language, in a way that can be both unsettling and humorous. In this work the words “A Particular Kind of Heaven” loom large above the landscape, dominating the sunset, it is as though the words should evoke a sense of longing, of wistfulness even, but the regid typography makes them appear alienated from the context. And without allowing any exact definitions, the viewer is forced to question the detachment between language and meaning.

Karin Breuer, the organizing curator of the exhibition has spoken of Ruscha being “adept at using all media, including prints, drawings, photographs, paintings and artist books, to explore different subjects or themes over time.” To her it was important to give a more subtle portrayal of the American West, rather than that of the typical horse riding cowboys which color so many people’s perceptions of the landscape. Breuer’s way of doing this was to focus on the work of Ed Ruscha, now one of America’s most expensive living artists, someone who has provided a uniquely lonely and provocative view of the American West—a view that only rarely features human beings. 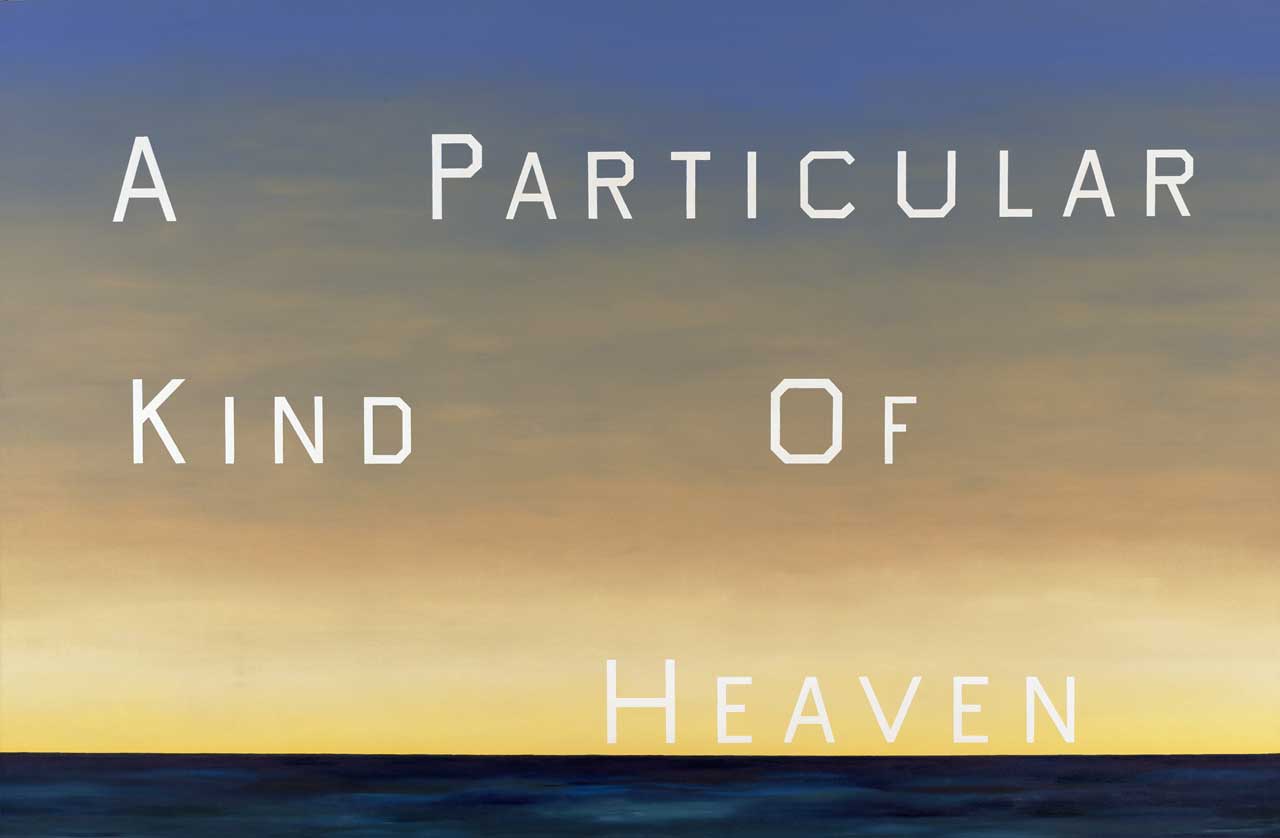 The exhibition brings together Ruscha’s famous photograph taken in 1962, Standard Station, Amarillo, Texas, 1966 the lightning rod for a series of paintings and prints that the artist would return to work on throughout his career. Also included are the famous technicolor renditions of the Hollywood sign, works that dramatize the aura of the movie industry as well as its escalating excesses. He has always been intrigued by the fact as opposed to the myth of Hollywood and Western expansion, its entrepreneurial drive, and its promise of something better.

Even at the age of 78 Ruscha continues to be productive and works from as recently as 2014, are included in the exhibition. He has a studio in the deserts of California, and regularly makes visits to the landscapes of the West, his home for the last 50 years. Though he has travelled widely, he is famously quoted as saying, “I'd rather be in L.A.”

“Ed Ruscha and the Great American West” at the Fine Art Museums of San Francisco runs from the 16th of July through to the 9th of October, 2016. 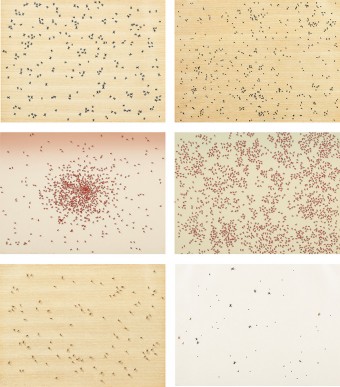