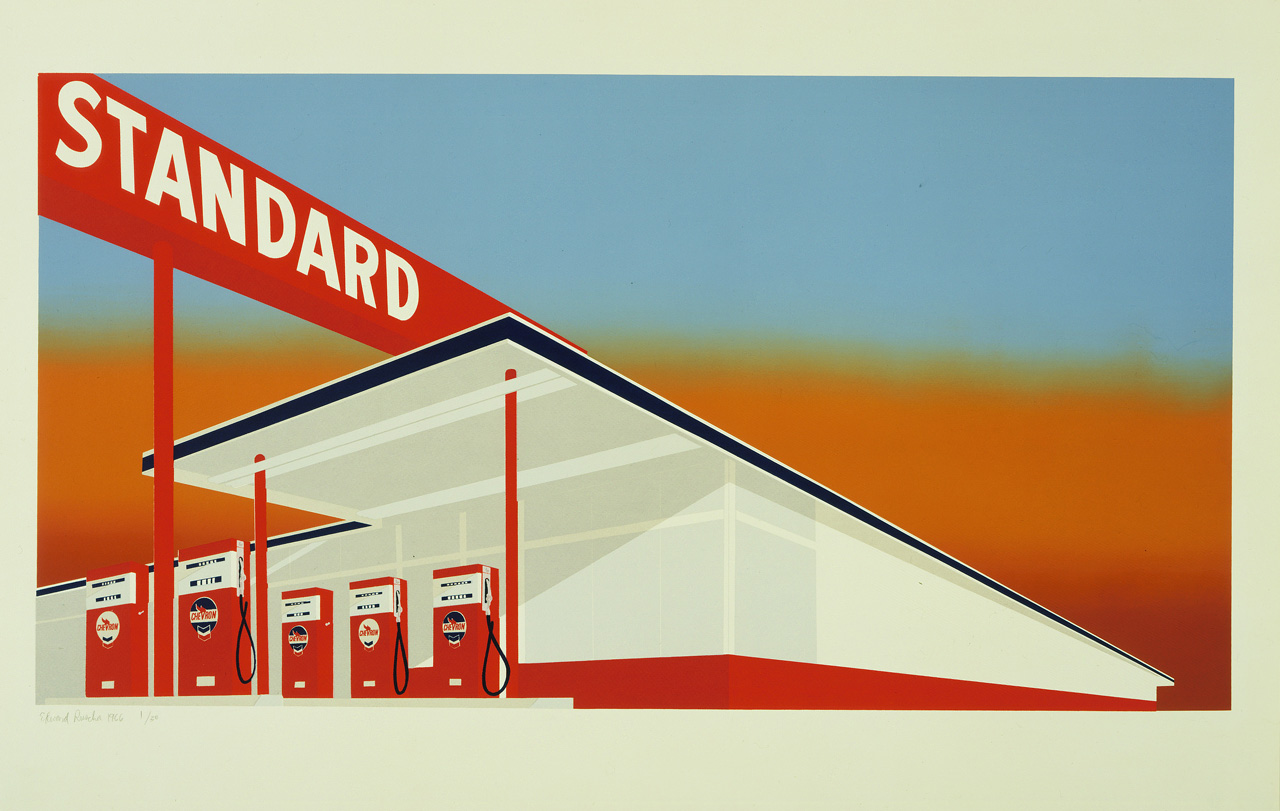 What is it?
An iconic limited edition screenprint of an American gas station, entitled Standard Station.

Why is it iconic?
Positioned in the vivid contrast of a cold blue sky and glowing orange horizon, the familiar image of roadside architecture, the gas station, is reduced to its essential geometric form.

The composition is startling
The diagonal line of the building, typical of Ed Ruscha, practically dissects the artwork down the middle. As it veers violently into view, like a hurtling train, the work is imbued with a sense of cinematic drama.

Standard?
The use of the word “Standard” encapsulates everything from a company logo, a perceived level of quality, even a banality, but perhaps most emphatically it symbolizes brand America.

Why a gas station?
Intriguing Ruscha has spoken about disregarding the “purpose of that building”, to focus on “this crazy little design that was repeated by all the gas companies to make stations with an overhang to create shade for their customers. It seemed to me a very beautiful statement.”

The work perfectly melds his fine art and design practice
By the end of the 1960s Ruscha was the production designer for the prestigious art magazine Artforum. Much like Andy Warhol, the techniques he used significantly influenced his fine art practice, and the limited edition above has the indications of graphic design.

What was the inspiration for this work?
It was in 1956 that Ruscha, then a very young man, first set off in his Ford Sedan towards Los Angeles, following one of the world’s most famous roads, Route 66. The view of telephone poles, roadside architecture and the great asphalt expanses would form the bedrock of much of Ruscha’s work, most markedly in his groundbreaking artist book Twentysix Gasoline Stations, 1963.

Typical of Ruscha’s practice?
The limited edition screenprint is emblematic of his work, which so often provides a uniquely lonely and provocative view of Texas and the American West. Devoid of any human form, the profound presence of the work stems from its aching simplicity, as it flies past you on a long stretch of highway.

Ed Ruscha’s Standard Station, Amarillo, Texas, can be seen in “The American Dream: Pop to the Present” now on at the British Museum from the 9th of March through to the 18th of June 2017.