Ever since curator Carolyn Christov-Bakargiev plucked her from near obscurity to participate in documenta in 2012, Etel Adnan has been one of the shooting stars of the art world. Not bad going for a nonagenarian artist who once considered herself more a poet than a visual artist. The Lebanese artist has become renowned for her compact and breathtakingly colored canvases, those sun-drenched semi-abstractions that caused such a stampede for her work.

There is a fluidity that seems to run through her work, a strength of perception that characterizes her writing, painting and limited editions too. In flowing lines Quelque part…, 2016 (pictured, below) captures in aching simplicity the terrain of a mountain range. Its succinctness is both tender and felicitous, it is the work of an artist that truly “loves the world.” Adnan was born in 1925 in Beirut to a Greek Christian mother and a Muslim Syrian father, a high-ranking general in the Ottoman army. Having mastered French Adnan won a scholarship to study philosophy at the Sorbonne in Paris in 1949, before moving on to Harvard in the U.S.

With the Vietnam war raging and the spirit of change seething through the country, Adnan became politically engaged, and, after receiving encouragement from a colleague, began painting. It is often said that her work has a “spirit of place”, but aligned with that sense of place is a clarity both unifying and uplifting. Like her radiant and concentrated abstractions, there is a willingness to see the good, the simple and the worthy in her subjects. Her work is, as the curator Hans Ulrich Obrist says, the “opposite of cynicism. It is pure oxygen in a world full of wars.”

That sense of clarity is emphasized in the sparsity of her limited edition etching Compotier, 2014. This is a work completed in one short sitting, depicting the joy of shape and form. She has written before that art “expresses my happy side the one that is at one with the universe.” Indeed, it is impossible not to look at Compotier without feeling the artist’s immersion in the act of making it, its bold lines unhesitant as they form the roughly rounded fruit.

The Lebanese civil war in 1970s inspired one of the Adnan’s most iconic works, Sitt Marie Rose, 1978 a novella about a Syrian assassinated by a right wing Christian militia for her social work with Palestinian refugees. Completed in one intense month of writing in 1976, it has become a landmark work for Adnan and a hallmark of feminist literature. Soon after the work was published Adnan started receiving death threats and the decision was made with her partner, Simone Fattal, to move to Sausalito in California. It was here that her art took off, as the terrain of Mount Tamalpais became imprinted in Adnan’s work. When asked in an interview who was the most significant person she had ever met, Adnan answered “a mountain”. She freely admits Mount Tamalpais lies at the center of her being, that central somewhere alluded to in the work Quelque part….

It is such a rare occurrence to have an artist moving so effortless between writing and art, that the curator Hans Ulrich Obrist has called her one of the “most influential artists of the 21st century.” She is now showing at the Serpentine Galleries in London, her exhibition “The Weight of World” deals with the themes close to her heart, politics and violence around the world and the torment of exile and migration—themes deeply relevant to contemporary Europe. The outgoing Director of the Serpentine Galleries, Julia Peyton-Jones, has deemed Adnan's work to be “underpinned by an intense engagement with the world and with modern history”, and even at 91 years of age this intense engagement remains undimmed, much to the joy of art lovers around the world. 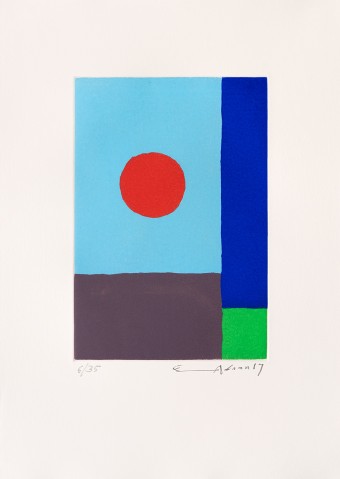