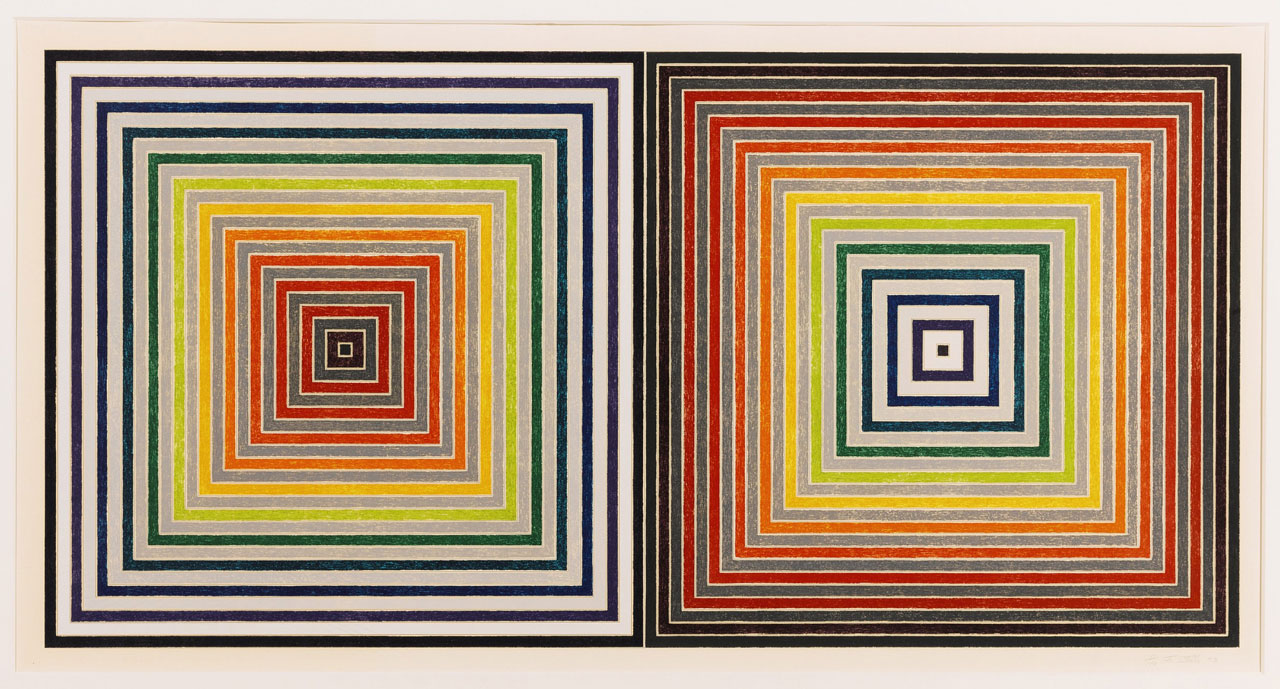 What is it?
A 50-color screenprint featuring two inverted mitered mazes, one employing the primary colors and the other employing grays, placed next to each other.

What makes it extraordinary?
The opposing prismatic color progressions produce an illusion of 3-dimensionality, with the works seeming to telescope right out of the paper.

What was the idea behind the work?
By placing the flat layer of color between two layers of textured color, Frank Stella achieves this shimmering visual effect—an incredibly hard thing to pull off in printing. Throughout his long career, Stella has used color, surface texture, and space to create dichotomies in his work, adeptly playing with real space as opposed to illusionistic space. Double Gray Scramble continues his exploration of the tension between the arrangement of color on the flat surface and the optical effect of the advancing and receding forms.

Was it difficult to print?
The use of so many colors makes this an extraordinarily difficult work to print, requiring 150 runs for each of the 100 editions! Using just three screens, one for the grays, another for the solid color bands and a final one for the more textured bands. One of the most time-consuming aspects was having to cover up parts of the print which should not be exposed to the new color.

Was Frank Stella always so demanding?
He was always fearsomely demanding of the printers in the workshop and an earlier work, Star of Persia 1, 1967, required an entire week of proofing and platemaking before they even got down to the edition printing. Ultimately his print works were as innovative as his canvas works, and he was not only adept at employing a vast array of techniques but he is even said to have invented the offset lithograph.

How do his print works relate to his oeuvre?
Frank Stella’s painting and printing practices were very much aligned and he often referred to his painting experiments through his print works. “You do two things in printing. First, you try to make the things you do with printing be like the things you do with painting and at the same time you try to do things that only printing can do. Those are the two ways that you work. Sometimes they go together and sometimes they pull apart from each other.”

What does it go for at Auction?
The work is highly prized and is in the permanent collections of MoMA in New York and the National Gallery of Art in Washington. In 2016 the work was put up for auction at Sotheby’s New York auction house selling for $68,750 (hammer price with buyer’s premium) well above its asking price of between $40,000 to $60,000.