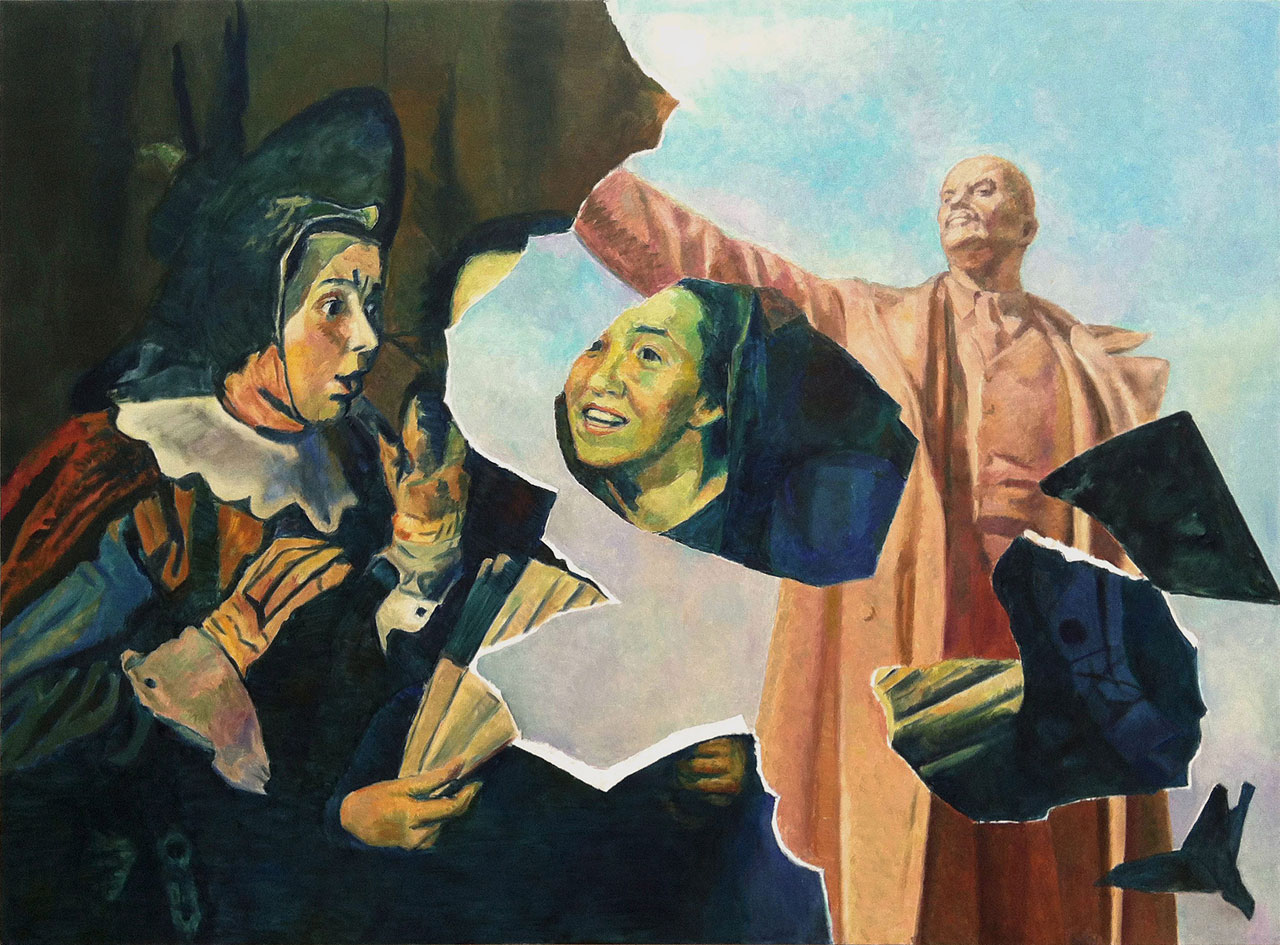 Ilya Kabakov and The Subtle Art of Subversion

Ilya Kabakov hated every moment of his 30 years as a children’s book illustrator for the USSR. The work was “complete censorship”, where even the look of the pet dogs was State controlled. He was never allowed to exhibit his art publicly—it lacked the requisite heroism—so he was forced to show his artwork in secret or in select exhibitions abroad. It is hard to conceive how Kabakov had any hope of developing as an artist, let alone critique the system from within. But Kabakov did just that, using his art to deftly reveal the deficiencies in the Soviet system.

In Russia today he is now lauded as its greatest living artist and can lay claim to being its most expensive too. Not that he cares for such things. He can never understand why “young artists think about success and money more than they think about development.” He has only ever been about the art, and every moment of every day is dedicated to that pursuit. 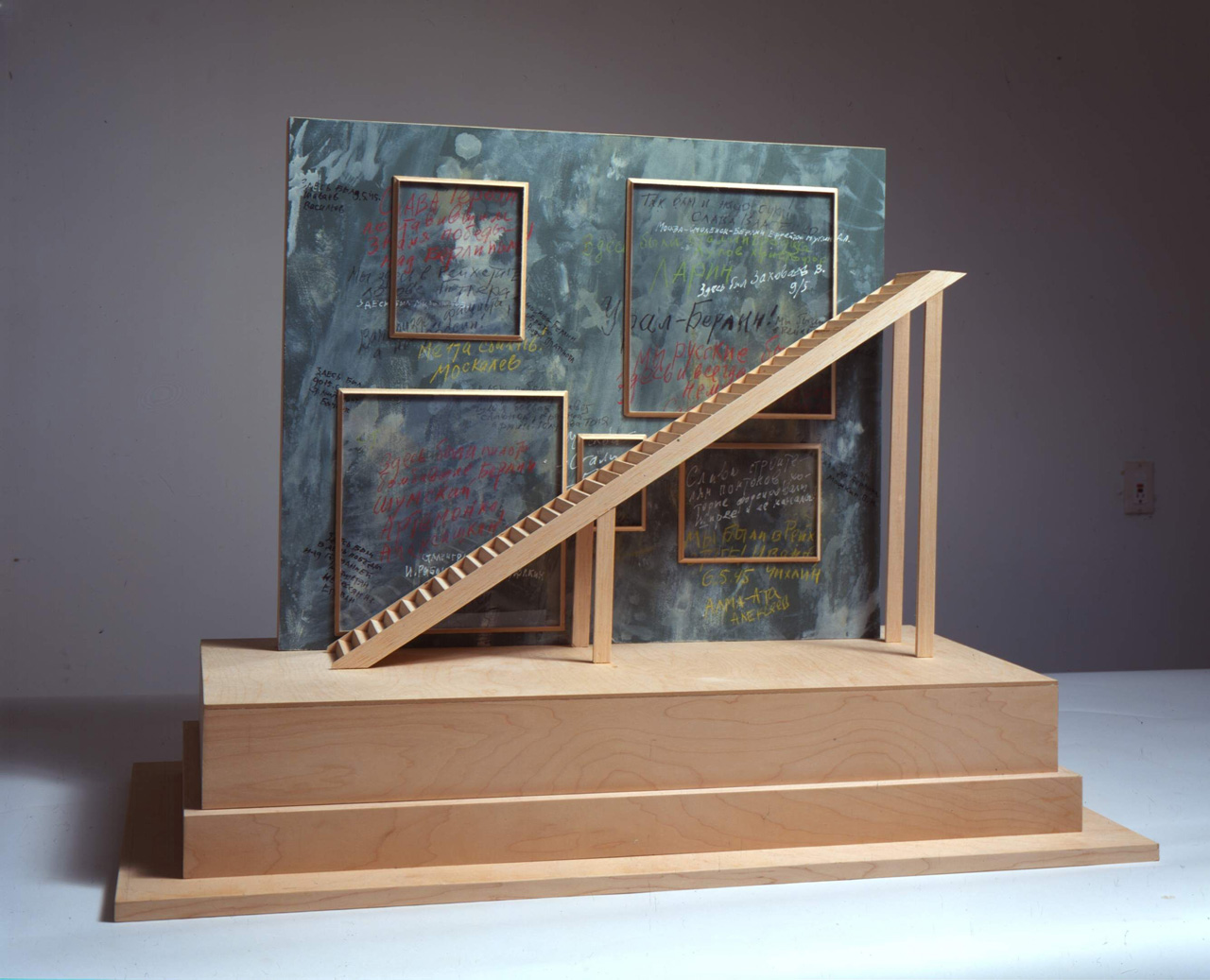 Russian artists from the former Soviet Union are very much in the spotlight owing to it being the centenary anniversary of the Russia revolution of 1917—that great idealistic moment in the twentieth century when it seemed possible that an entirely new society (a worker’s paradise) could be built around the principles of democracy and equality. That dream of course turned into the horrors of Stalinism. Kabakov now rarely talks about his past in the USSR, but when he does the remorseless reality of life is revealed: “I never answered the phone. I didn’t open the door unless I knew who was coming. You had to watch what you were doing, what you were saying. In a way everyone had a double life.”

Growing up Kabakov and his mother lived in a communal flat—after the revolution grand apartments were given over to the proletariat, who were given one room in which to house their entire families. Consequently he and his mother “never had a corner” to themselves, and the petty brutality of living together in a crowded space is a repeated metaphor in Kabokov’s work. In his painting Carrying out the Slop Pail, 1980 he maps out a 6 year Rota for the occupants of a communal flat to empty the toilet pan. Its bitter humor depends on its simple humanity, the pettiness adding up to a profound tragedy.

Born in Ukraine in 1933, he and his mother soon moved to Moscow where he attended art school. His education was strictly classical, what he once termed “bureaucratic and dead… We all were physically present but mentally absent.” He was quickly identified for his talent and so began his career as an illustrator, producing more than 140 books for the State. He only needed to work three months a year on these projects, and the work gave him access to valuable artist materials. 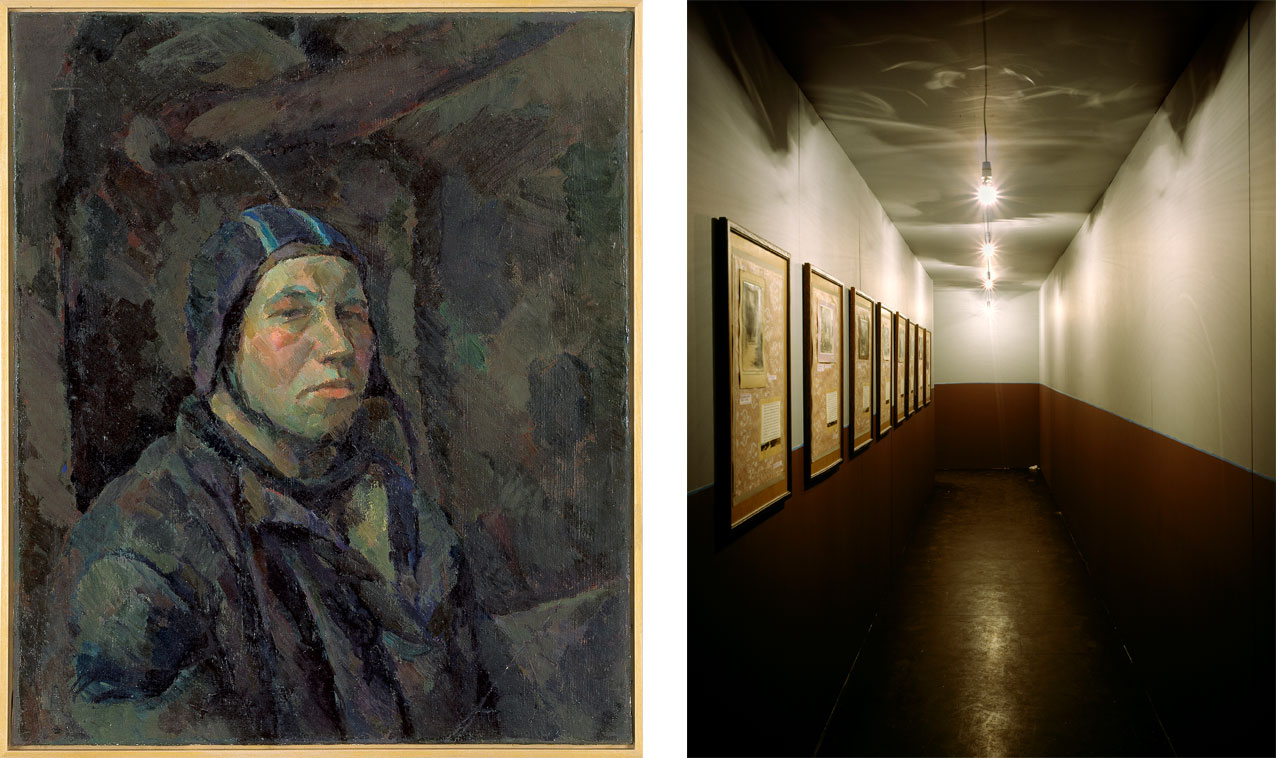 Things changed in 1965 when he was banned for 4 years for exhibiting a series of drawings in Italy that depicted a man standing under a shower but unable to get wet. The State considered the drawings critical and mocking. Undeterred Ilya Kabakov began inviting small groups of guests to view his works secretly in his apartment. Soon his studio became a place for discussions among artists and intellectuals, all coming to see his artwork’s light, illustrative style, juxtaposed with his discordant text.

Even then his appropriation of Socialist style was significant, allowing him to criticize from the perspective of the people caught up in the day-to-day drudgery of Soviet existence. Westerners viewing his paintings often can’t see beyond his anachronistic USSR style, but now that the USSR has vanished, his preservation of that socialist realist style gives his work an added component, as though he was searching out mysteries in its aching banalities.

His final move to New York in 1987 marked a turning point for his career and the beginning of his collaboration with his wife Emilia. Having been largely isolated from developments in Western art, Kabakov was suddenly consumed by the need to produce immersive “total” installations. These all-encompassing environments combined drawing, sculpture, painting, poetry, and music into a multisensory dramatic experience. Many of the most well-known installations are now on show at Tate Modern’s unmissable exhibition “Ilya and Emilia Kabakov: Not Everyone Will Be Taken Into the Future”. 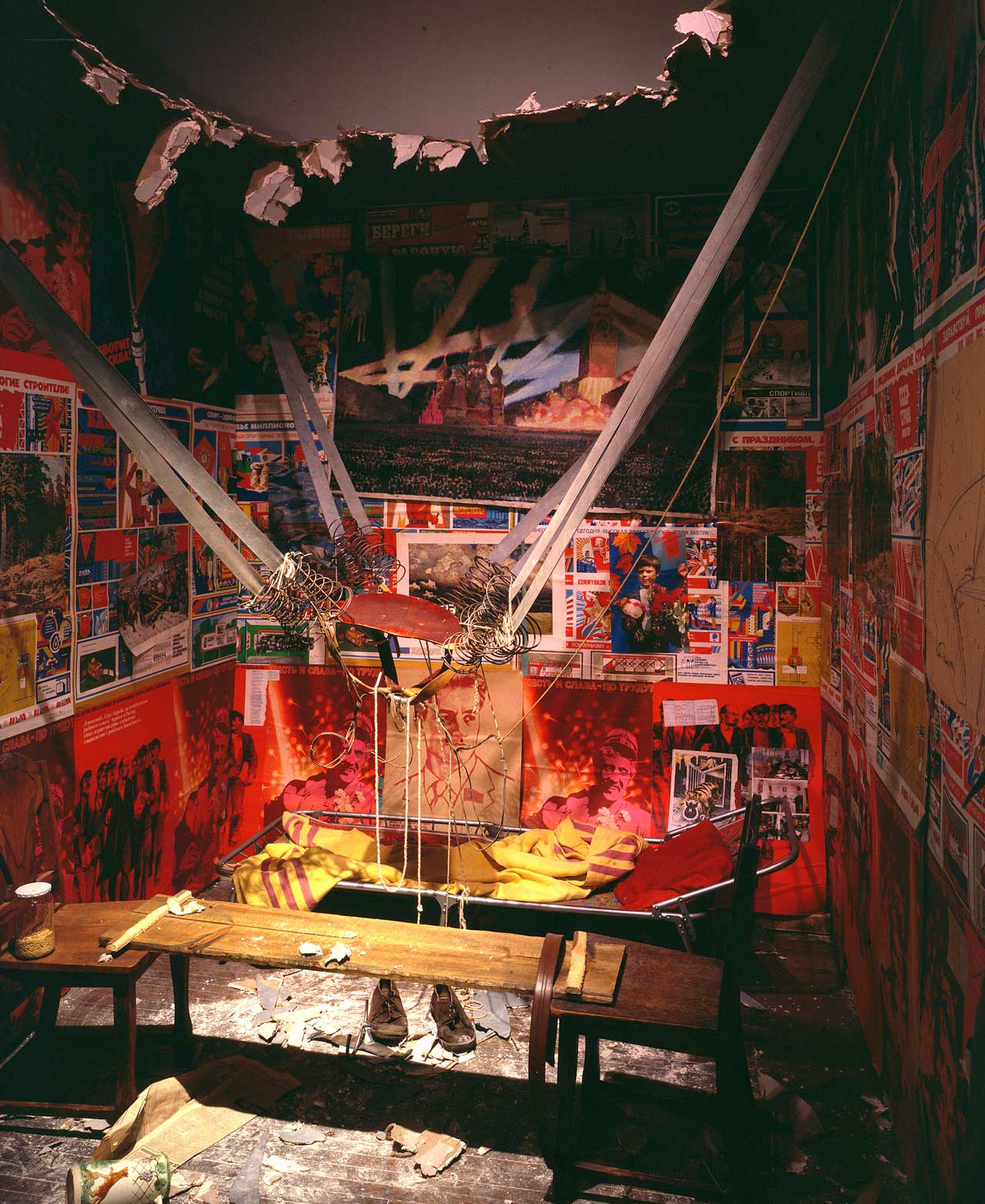 In Ilya and Emilia’s Kabakov’s first major installation The Man Who Flew into Space from His Apartment, 1985, an isolated dreamer builds a makeshift slingshot so that he can fly into outer space. Surrounded by Soviet propaganda posters he appears to have succeeded—he is never spotted again. The work is far more complicated than a derisory jibe at the Soviet project and its dated technology, but a pathetic cry of individuality in the midst of an unbearable collective hegemony. Combining biting satire and idealism, the installation is typical of Kabakov’s ambivalent response to Soviet reality.

Critic Svetlana Boym has written about Kabakov’s work exploring the “aspirations of the little men and amateur artists and the ruins of modern utopias.” Like the life of his mother, who lived through the Russia revolution, two World Wars, famine, glasnost and perestroika. Before she died Kabaokov persuaded her to write a diary, which he then used in his installation Labyrinth (My Mother’s Album), an undoubted masterpiece of 20th century art. Framed excerpts from her haunted life line the corridors of this oppressive installation, and throughout you hear Ilya Kabakov singing melancholy songs from his childhood. Frightening in its size—one long corridor seems always to turn into another—you are totally immersed, giving you a tiny sense of how it must have felt to be trapped in such a system.

His wife Emilia is integral to the completion of his ambitious installations and like Christo and Jeanne-Claude, all their major works are a collaboration between them. She organizes, supports, translates everything around him. None of his installations would have been possible without her, and together they have produced some of the most haunting installations ever created. This exhibition could well be the most vital event in the 100-year anniversary of the Russia Revolution. Exposing the haunting aftermath of the Soviet dream, they take us on a labyrinthine journey through a land of absurd optimism and exhausted hopelessness. Here and there, amongst the densely layered narratives, we get a glimpse at a deeply moving tale of humanity.

“Ilya and Emilia Kabakov: Not Everyone Will Be Taken Into the Future” can be seen at Tate Modern from now until the 28th of January 2018. 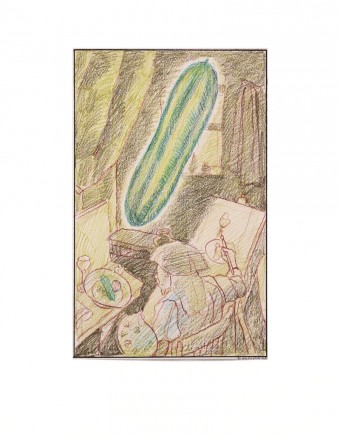 Ilya Kabakov
The Artist at Work, 2016 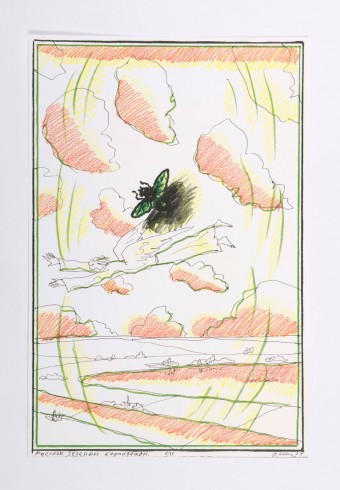 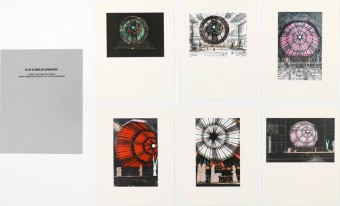