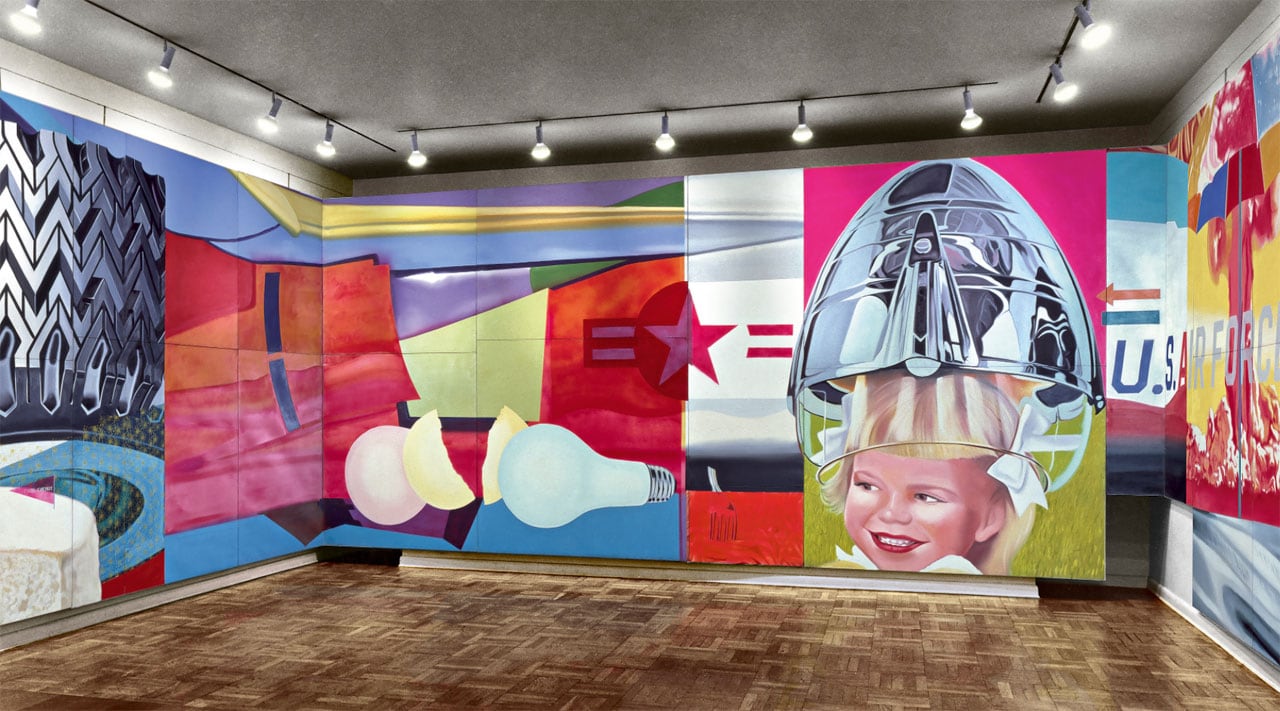 In 1965 James Rosenquist produced an artwork that shook America out of its complacency. Considered the Guernica of the 60s, its clashing day-glo colors and warped subject matter “summed up America as an Eden compromised by its own violence.” Designed to wrap around the entire wall space of the Leo Castelli Galley in New York, the 80ft painting of a full-scale F-111, America’s highly-advanced strategic bomber, symbolized the inescapable trap of the military industrial complex. But more importantly, the American public’s complicity within it.

At a time when art world was in thrall to Andy Warhol’s cool renderings of American celebrity and brand culture, Rosenquist revealed a new critical resistance to Pop Art. Without irony, but with a deadpan “directness that suggested innocence”, he depicted the bomber as though flying through the flak of a consumer society, questioning the “collusion between the Vietnam death machine, consumerism, the media, and advertising.” Suddenly America’s innocent “consumer-citizens who turn a blind eye to the destructiveness of the system” were fully implicated. 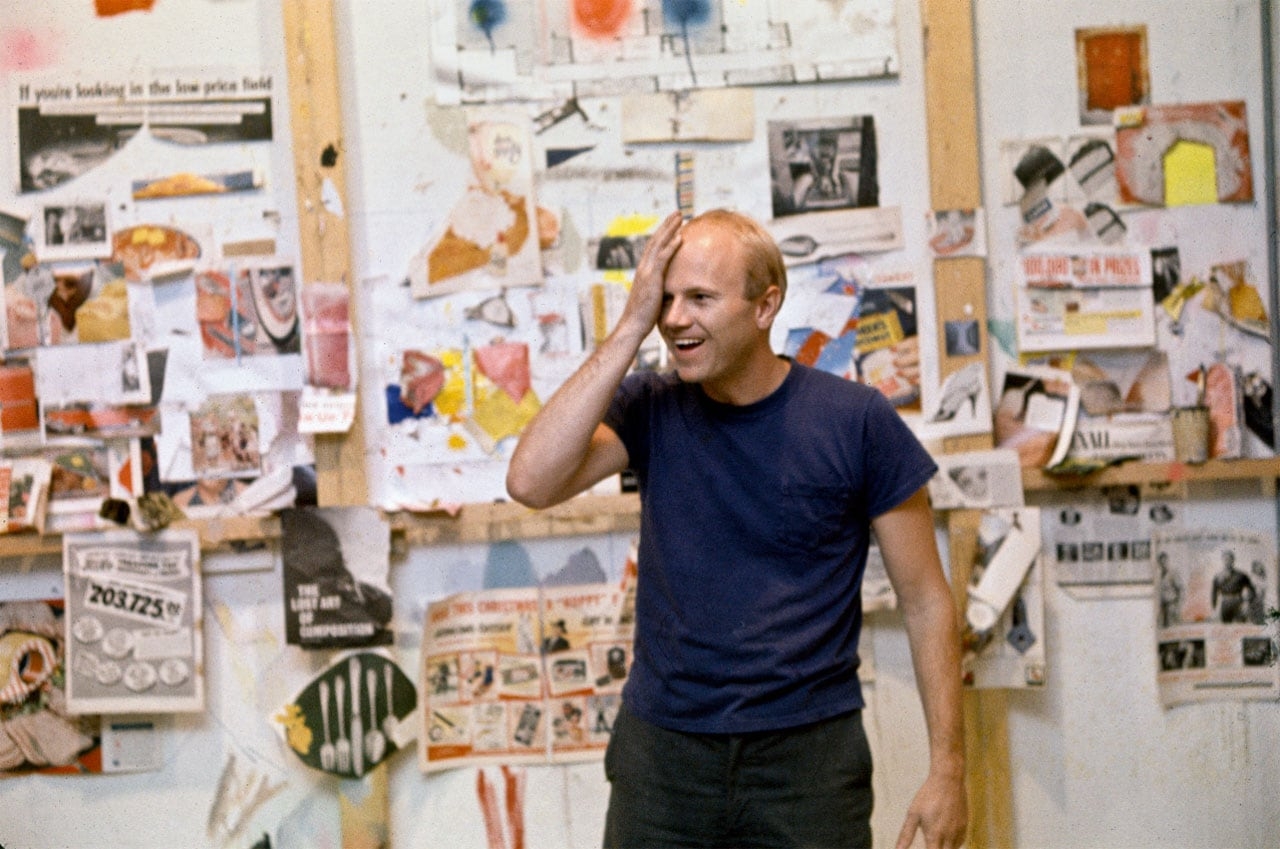 For an artist who had earned his living by commercial painting, the vast scale of F-111 was never an issue. Having painted the giant Times Square billboards in New York for three years, he knew how to produce an immersive environment and heighten viewers’ awareness. Back in the 1950s, when all signs were still hand-painted, Rosenquist would siphon off unused paint to take back to his studio. But in 1960 he quit sign painting altogether when two of his colleagues were killed after falling off a scaffold.

James Rosenquist’s career rose dramatically after F-111’s first exhibition. Bought by a collector in 1967, it toured major institutions in Europe before finally ending up at the Venice Biennale in 1978. Critics and viewers were fascinated by the kaleidoscope of images that, although appearing random, were carefully chosen for their disturbing and acerbic connotations. The hairdryer above the girl glistened like the polished cone of an ICBM warhead, the cupcake a spongy missile silo.

In another memorable work, I love you with my Ford, 1961, a woman’s dreamy face rises from a plate of tinned spaghetti to kiss the grill of a Detroit car. Like a dissection of contemporary life, this fantasy of desire captures the kind of fragmentary images our eyes catch when we hurriedly cross a city street. Incongruous and sensual, the artwork both defined an era and unpicked its imagery from within.

Through its collage of images, creating, according to Rosenquist, “a kind of motion in the mind”, America’s mainstream cultural values were being questioned by its own popular advertising imagery. Its dream of equal opportunity and social mobility were dependent upon quick fire “images zapping by,” the consumerist drive urging one to buy more, seek more, attain more. What was happening, James Rosenquist was asking, to the American Dream?

Despite an early dalliance with Abstract Expressionism—“Splashing your psyche on the canvas”—James Rosenquist was always a leading proponent of Pop Art, a term he felt “resigned” to. He had no interest in brand names or simulations of pop media like Roy Lichtenstein or Andy Warhol. For him the “only thing the Pop Artists had in common is that we all had been commercial artists in some manner… but we didn’t work together. I didn’t meet Andy Warhol until 1964.”

The latest exhibition at the Ludwig Museum in Cologne, “James Rosenquist: Painting as Immersion”, has taken on added significance after the death of the artist earlier this year aged 83. He had first visited Germany soon after the wall came down, and had accepted a commission from the Deutsche Guggenheim Museum in 1992 to paint a mural for the beleaguered East. Inspired by the new country taking shape in the aftermath of the Second World War, the 3-paneled Swimmer in the Econo-mist tackled the changes that had shaped the 20th century, but also the role of the artist and individual, at a time of both tragic violence and vibrant abundance. 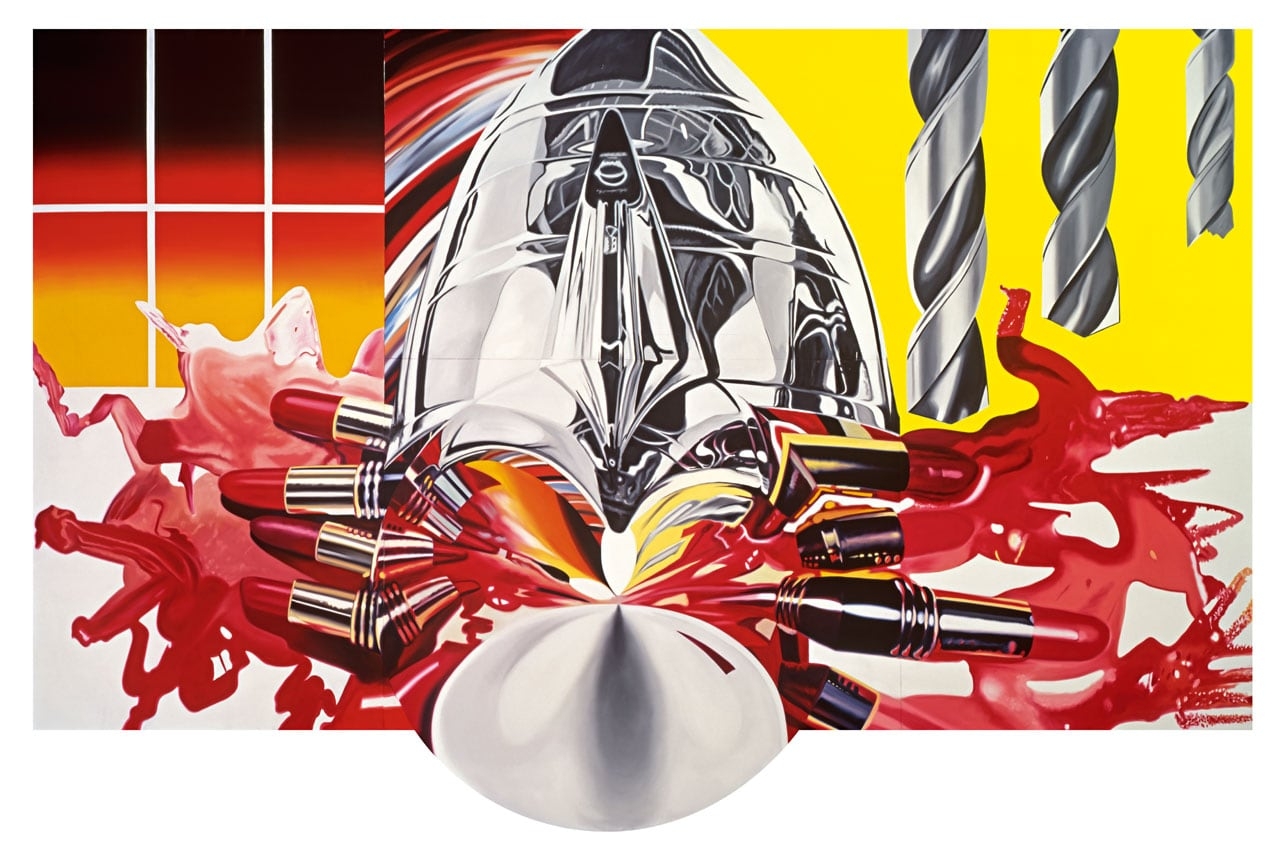 The two long canvases of this enormous work extend like swirling vortices down each side of the gallery—a dizzying spectacle of color and monochrome, the everyday and extraterrestrial. Each of them hurtle dramatically along the gallery walls before coming to an abrupt halt on reaching the final canvas (pictured above). Here, appearing like an inverted alter, a German flag emerges like the dawn breaking over a new world. Even in a painting concerning the forging of a new national identity, James Rosenquist approached it with “contemporary vision—the flicker of chrome, reflections, rapid associations, quick flashes of light. Bing! Bang!”

Since his death the artwork of James Rosenquist is once again getting the focus it deserves, not least because of his masterful ability to combine incongruous elements into a poetic and pulsating whole. He once said of himself that he was “the one who gave steroids to Pop Art” and, looking at his momentous works, in which the entire spectrum of contemporary life seems filtered through his mind and his art, it’s impossible to argue with this statement.

“James Rosenquist: Painting as Immersion” can be viewed at the Ludwig Museum in Cologne from now until the 4th of March 2018. 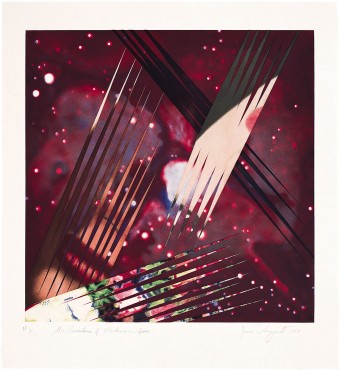 James Rosenquist
The Persistence of Electrons in Space, 1987 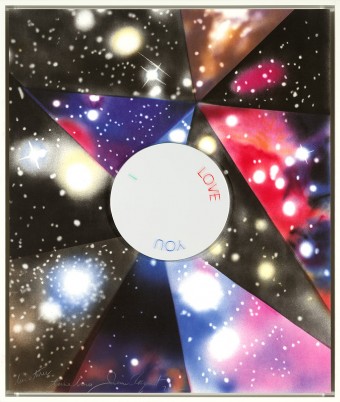