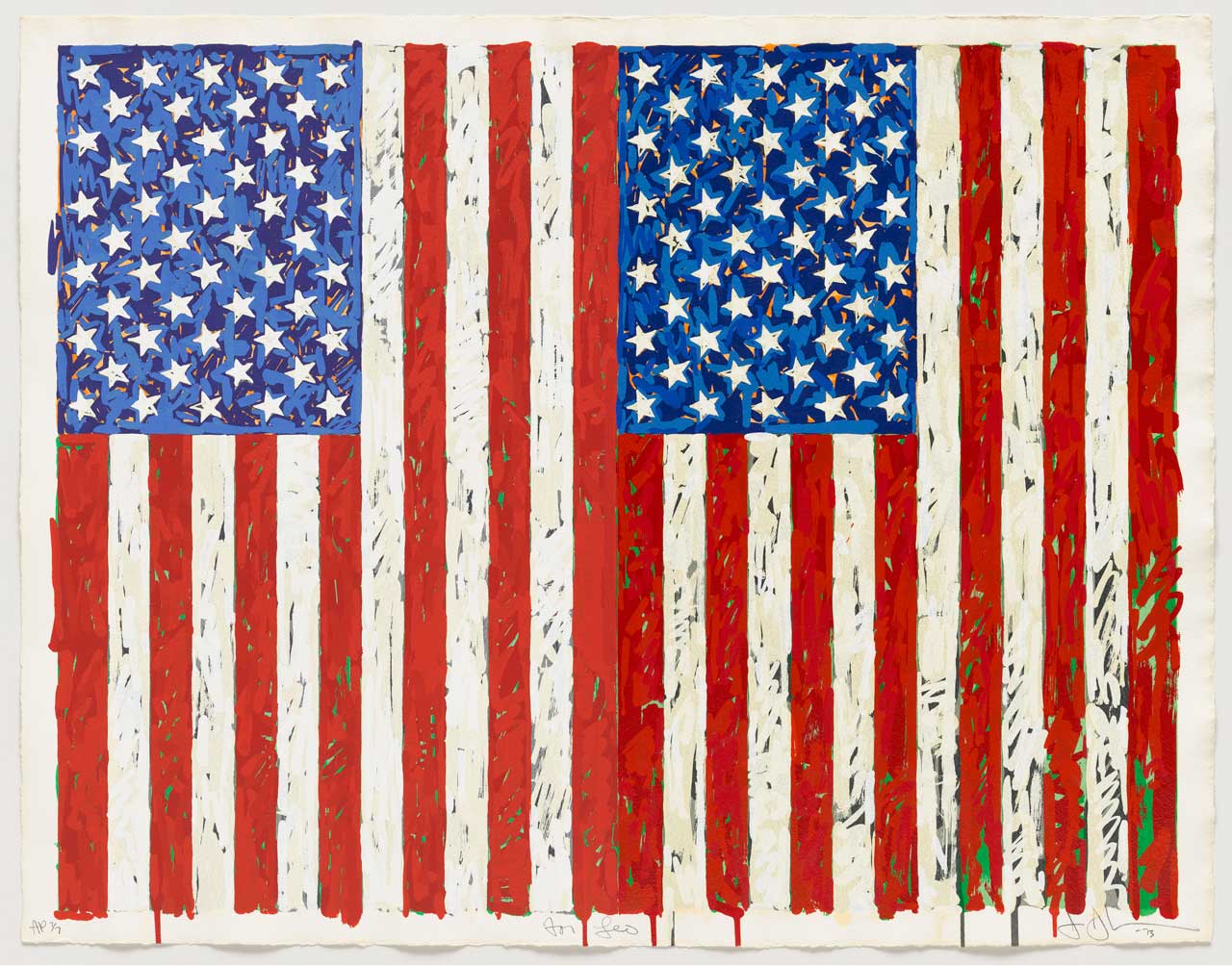 What is it?
A vivid and visceral screenprint rendering of the stars and stripes by the American artist Jasper Johns.

What made him first choose the flag?
Johns once said he awoke one morning having “dreamed that I painted a large American flag”. That same morning, he went out and bought the materials he needed and got to work. But the flag has further significance for the artist, who was named after a hero from the Revolutionary War, Sargeant William Jasper, who heroically raised the flag during a battle in Savannah—he would later die from his injuries.

Is it a faithful representation?
Intriguingly Johns represents the flag’s motif faithfully, a decision that was—according to critic and author Isabelle Loring Wallace—“more mystifying than had he deviated from the flag’s conventional form. More like a riddle than an expression of patriotism or unconscious zeal, Flag is, in many respects, deeply challenging.” Johns was questioning what a work of art actually is, and how it can be “differentiated from the object it represents.” Provoking the unanswerable question, is it an artwork or two flags? As is so often the case in Johns’ work, there is no satisfying answer to this question, just the assertion of its astounding significance in art history.

Why does the screenprint have what looks like brushstrokes?
Jasper Johns was always experimenting with the medium having been introduced to it by Andy Warhol in 1960. What marks out Flags 1 is its avoidance of flat color, so typical of screenprinting and exemplified by Warhol’s Campbell’s Soup Cans. The brushmarks give the masterpiece a shredded feel, but also a sense of movement. 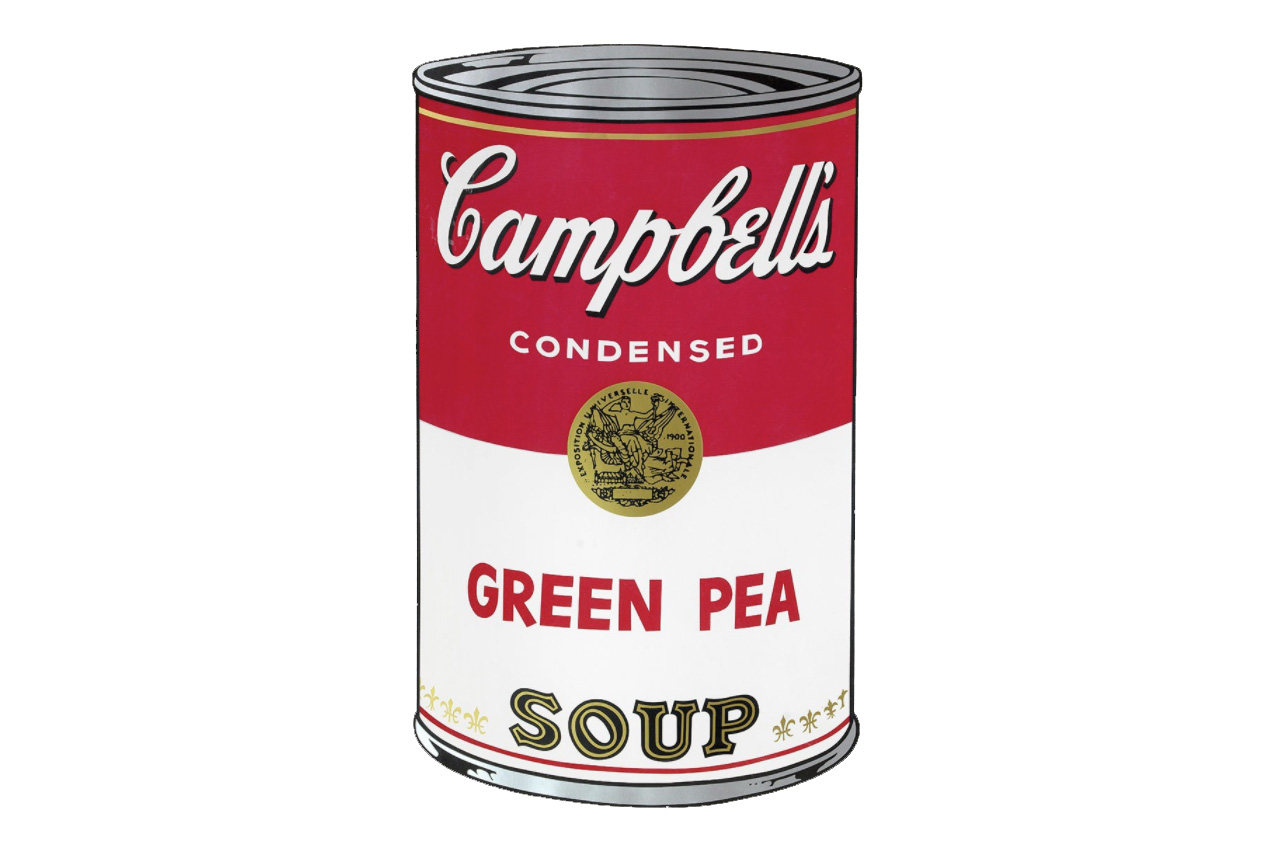 Is the fact that Johns revisited the flag idea in the early 1970s significant?
Completely—the symbolism of the American flag varies considerably from person to person. Although the first Flag painting was made in 1955—during the time of the McCarthy witch-hunts in Cold War America—the revisited idea in the 1970s came at a time when opposition to the Vietnam War was at fever pitch. Whereas some would see the flag as conjuring up notions of pride, unity and freedom, to others it signified imperialism and aggression.

Is it textured like his flag paintings?
In the same way that Johns’ paintings were layered with encaustic paint, newspaper, wood and canvas, the print had a plethora of layers, needing a complicated printing process that involved 31 different screens printed in succession in fifteen colors. The thickness of the work fixes the flag in stasis, it certainly would not be able to flutter.

How does this fit in with his oeuvre?
Jasper Johns severed the boundaries that existed between traditional fine art and everyday life, by representing common objects and images and placing them in the realm of fine art. He once said that although he “knew it was a flag, and had used the word flag; (I) had never consciously seen it.” Such things “the mind already knows”, possess multiple connotations and meanings for the audience, thus fostering the perceptual ambiguity at the core of his artworks.

Jasper Johns talking about the idea behind his first flag masterpiece, Flag, 1955.

Are both flags the same?
Intriguingly the right flag is sharper and brighter than the one on the left. It has a layer of varnish too which the left doesn’t—so it presents two interpretations of the same subject, and provokes a slight inbalance in the masterpiece itself.

"The American Dream: Pop to the Present” at the British Museum runs through to the 18th of June 2017. 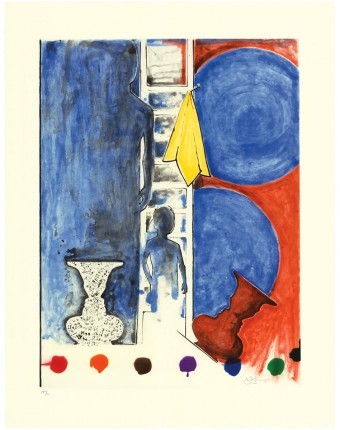