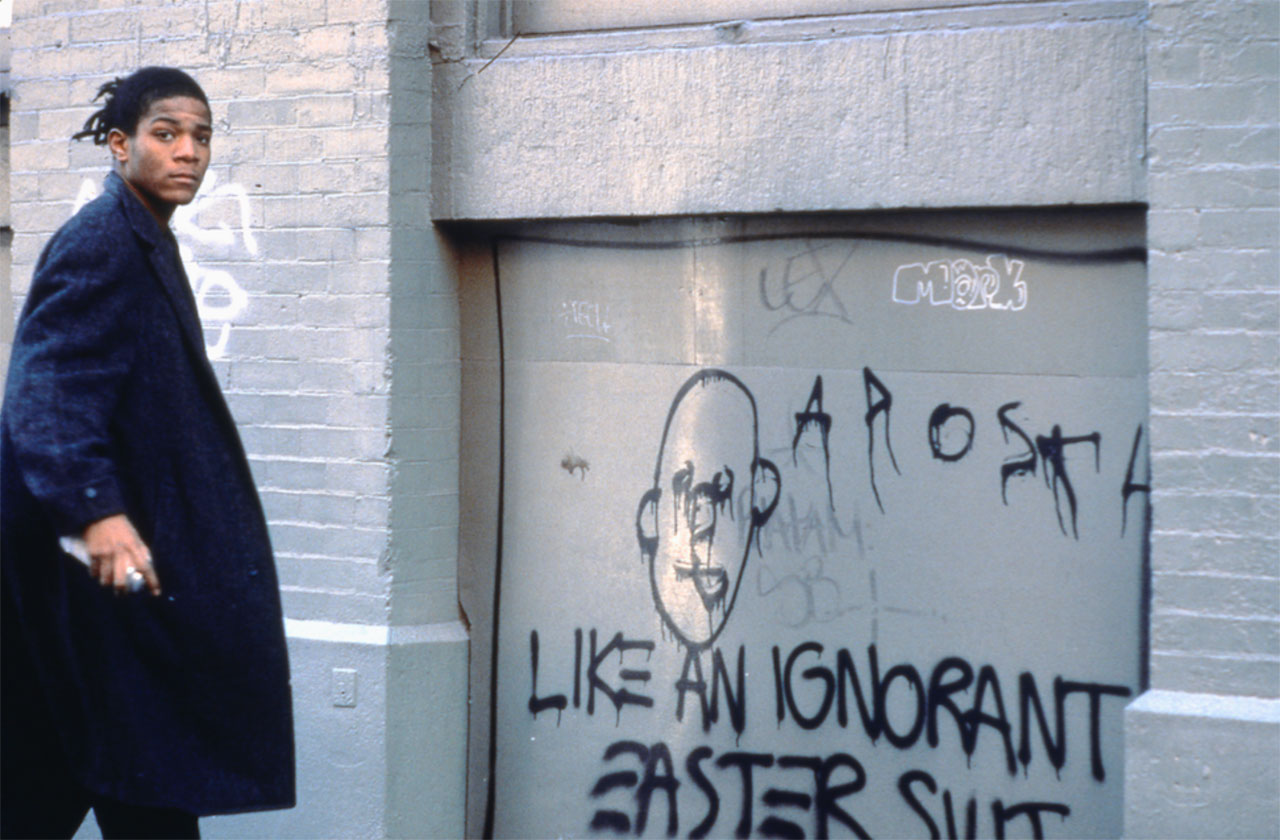 When Larry Gagosian first saw the work of Jean-Michel Basquiat his “hair stood up. I was blown away”. Expecting some old French guy the last thing he imagined was this startlingly handsome black artist, then aged just 19. Gagosian snapped up 3 paintings straight away for $9000. The world’s most important art dealer can spot a good thing when he sees one, but even he could not have predicted the meteoric ascent of this downtown graffiti artist, who earlier this year, with the sale of Untitled, 1982, in New York for $110.5 million, overtook Andy Warhol to become America’s most expensive ever artist.

Jean-Michel Basquiat has become the most mythologized and romanticized figure in Contemporary Art. But the boy who went from unknown street artist to global star in just a few short months, will only ever be viewed tragically, having died of an unintentional heroin overdose aged just 27. Many see him as being “cannibalized” by the art world that so feted him—a victim of the overly commercial hyped up international art market of the 1980s. What’s left are his vibrant and raw canvases, works of mesmerizing scope and power that sparked a 1980s gold rush among collectors. But fame came like a thunderbolt, and he never recovered from the fall out. 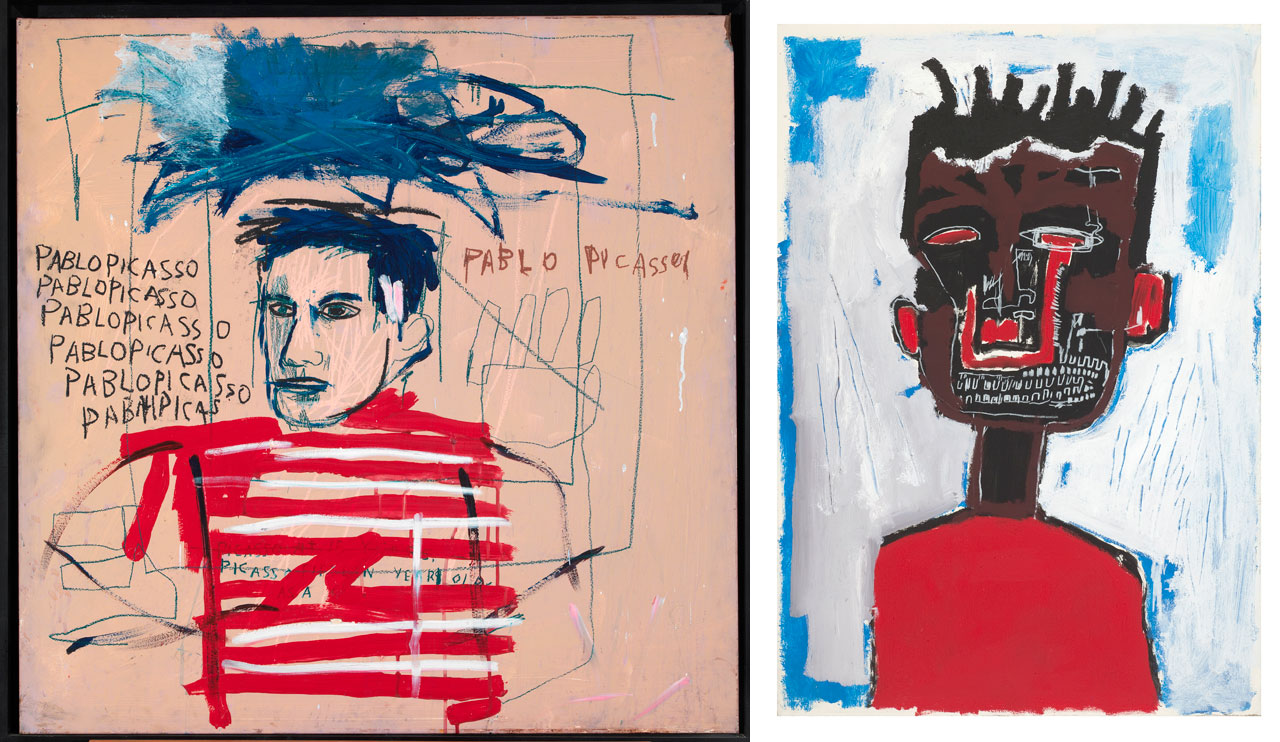 It is astonishing to think that after his death in the 1990s he was dismissed as a lightweight—to this day no British public collection holds a Basquiat, even MoMA in New York, his home city, have none in their permanent collection. Where his reputation first truly began to revive was with the sportsmen, musicians, and actors, non-experts who have profound interest in the story of this self-taught artist—one of the few Black and Hispanic artists to break through to international status. Kanye West and Jay-Z own canvases, alongside Leonardo DiCaprio and Johnny Depp—he has become the ultimate A-List status symbol.

Born in Brooklyn to comfortably middle class immigrant parents who divorced when he was seven, Basquiat dreamed of becoming a cartoonist or writer. At 17 he dropped out of school and alongside an old school friend began writing with a marker pen odd poetic messages around SoHo, “ANOTHER DAY ANOTHER DIME HYPER COOL ANOTHER WAY 2 KILL SOME TIME”. They signed the phrases with the tag SAMO©—using the copyright symbol to suggest a corporate brand name. Although done anonymously, the graffiti caused a significant stir around New York.

Back in the 70s New York was a downtrodden art mecca, thrilling and cheap, it was an exhilarating time to be in the city. Everyone wanted to make it big, everyone was either an artist, musician, or actor—Basquiat could not have been better placed. But without money for painting materials he would scrawl on fridges, TVs, bits of detritus he found on the streets, just about anything he could get his hands on. 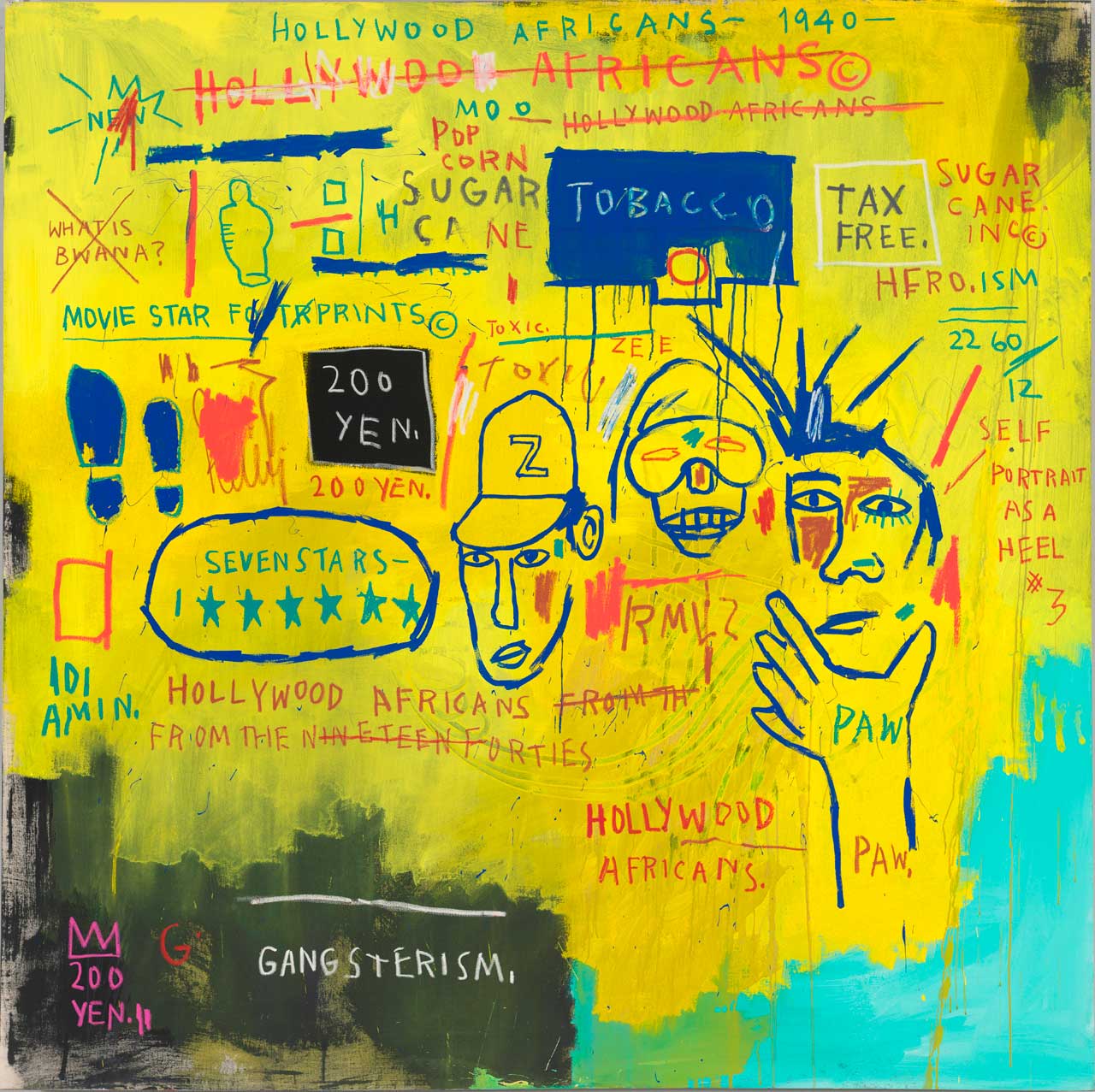 Even then his ability to sample the complexity of life in his painted scrawls, pulling together his encyclopedic interests in art history, contemporary heroes, African symbols whilst questioning identity, race, were unlike anything seen before. “I don’t think about art while I work,” he said once. “I think about life.” Ideas “flowed out of him like a fast-moving waterfall”, his great friend in the early days of his career Jennifer Vonholstein once wrote, “it was amazing to watch.”

By the time he got his first solo exhibition at the Annina Nosei Gallery in New York, 1982, everything sold out at the vernissage—earning him hundreds of thousands of dollars in just one night. That same year he gained international recognition by becoming the youngest ever artist to participate in documenta 7 in Kassel. Soon collectors and dealers began teeming around the young artist in his tiny tenement apartment on the Lower East Side. In little over half a year Basquiat had gone from stealing bread on his street corner to making his first million. The running joke was that his paintings were selling before the paint had even dried. 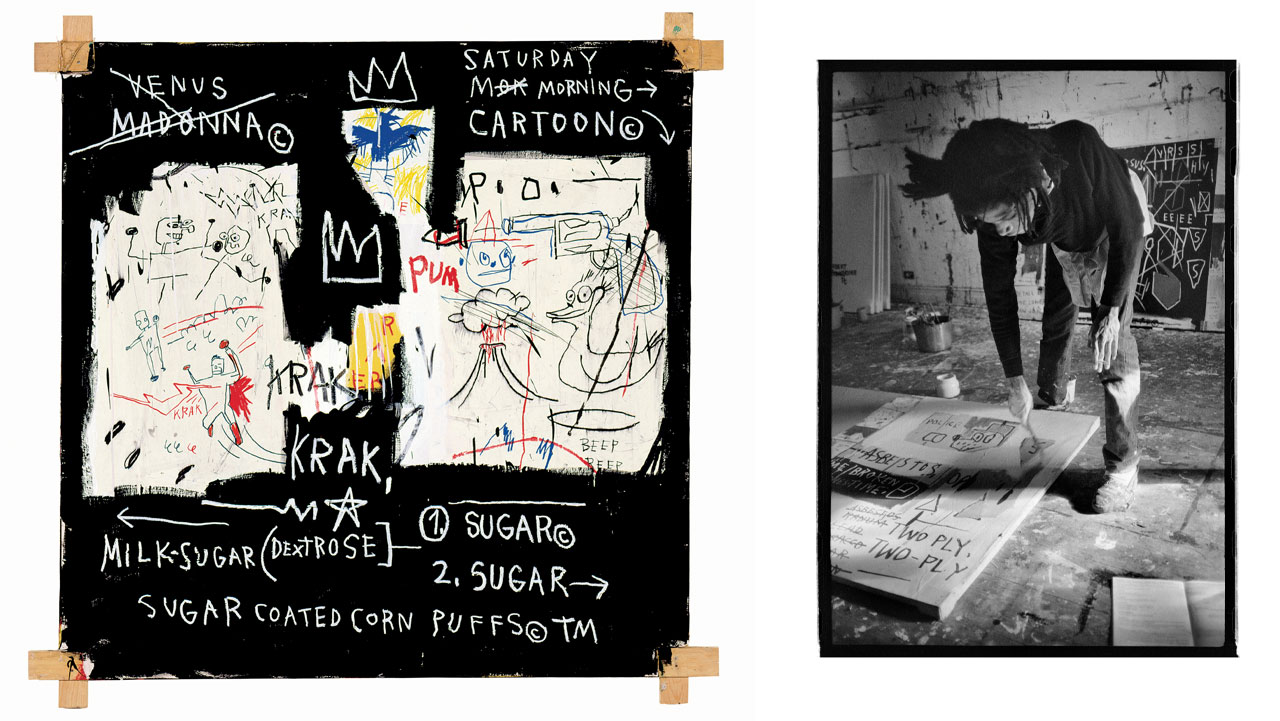 Even before he became the darling of the New York art scene he was known for his short temper, and collectors were attracted to his unpredictable personality. Like his paintings which could be childlike and frightening, he would be engagingly timid then aggressive and temperamental. “I made the best paintings ever”, he recounted in 1982 when he first started selling works, “I was completely reclusive, worked a lot, took a lot of drugs. I was awful to people.” As critic and friend Jeffrey Deitch once wrote: “Basquiat is likened to the wild boy raised by wolves, a child of the streets gawked at by the intelligentsia. But Basquiat is hardly a primitive. He’s more like a rock star.”

Basquiat’s disdain for art hierarchies set him aside. On one occasion a hapless dealer had tried to secure a painting for herself by bringing an expensive jar of nuts to Basquiat’s studio having earlier spotted his love of health food. Basquiat, nodding his head during her conversation about her black driver actually working in her gallery, had waited till she left the building before leaning out the window and pouring the contents of the jar over her head.

It wasn’t until 1979 that he first met his hero, Andy Warhol, after following him into a restaurant and selling him a postcard for $1. A few years later the pair were inseparable. To Basquiat, still coming to terms with his success, Warhol was like a protective alter ego, while the older artist was captivated by the younger man’s streetwise energy. Between 1983 and 1985 they worked together constantly, Warhol’s ironies crashing into the weighty obsessions of Basquiat. Many would come to blame Warhol for deadening the punk edge of Basquiat’s work, but he always claimed that the only thing Warhol gave him was the desire to “wear clean pants.” 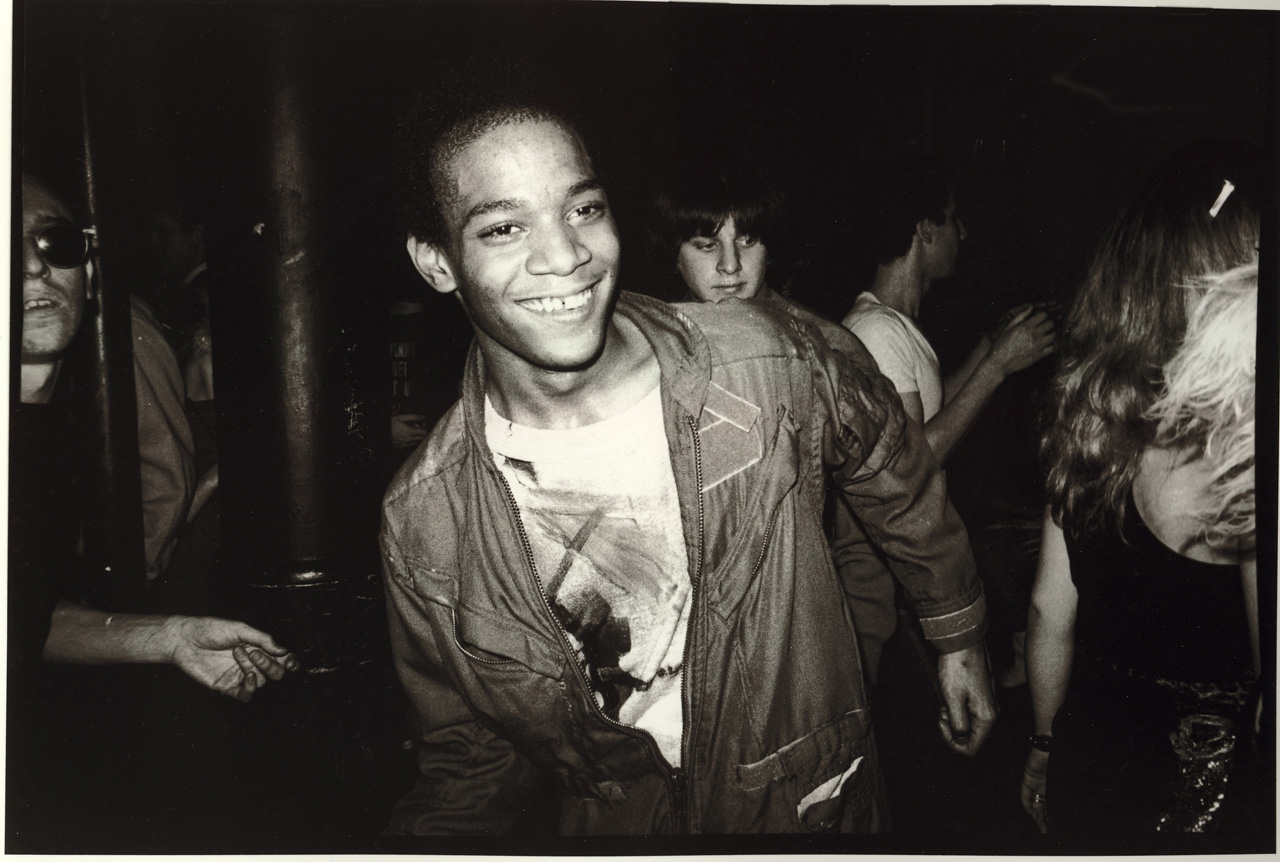 What Jean-Michel Basquiat had was elusive and magical—the ability to take everything from his mind and memory banks, channel it through his body and put “right there on that rectangle of canvas.” Though he spoke often about “the black person being the protagonist in most of my paintings,” he never saw himself as a black artist, just “an artist.” But his paintings laden with the skulls of dead slaves and lynch mobs, tell another story, the story of America and its complex fabric of African-American culture. In Hollywood Africans, 1983 (featured above), the canvas is littered with oblique references to the slave trade, “Sugar Cane” and the “Tobacco“ industry.

His downfall was as quick as his success was rapid—overwhelmed by his own celebrity he spiraled into drug addiction, ending up with a $500 a day heroin habit. He died from an overdose in 1988, just a year after Warhol—unable, according to Vonholstein to “face the entire art world, no matter how much of a genius he is. Emotionally, he was not ready.” Now, even 30 years after his premature death, he remains one of the few visual artists to take the energies of the street and translate them into high art.

Basquiat: Boom for Real at the Barbican Art Gallery in London can be visited from the 21st September through to the 28 January 2018.