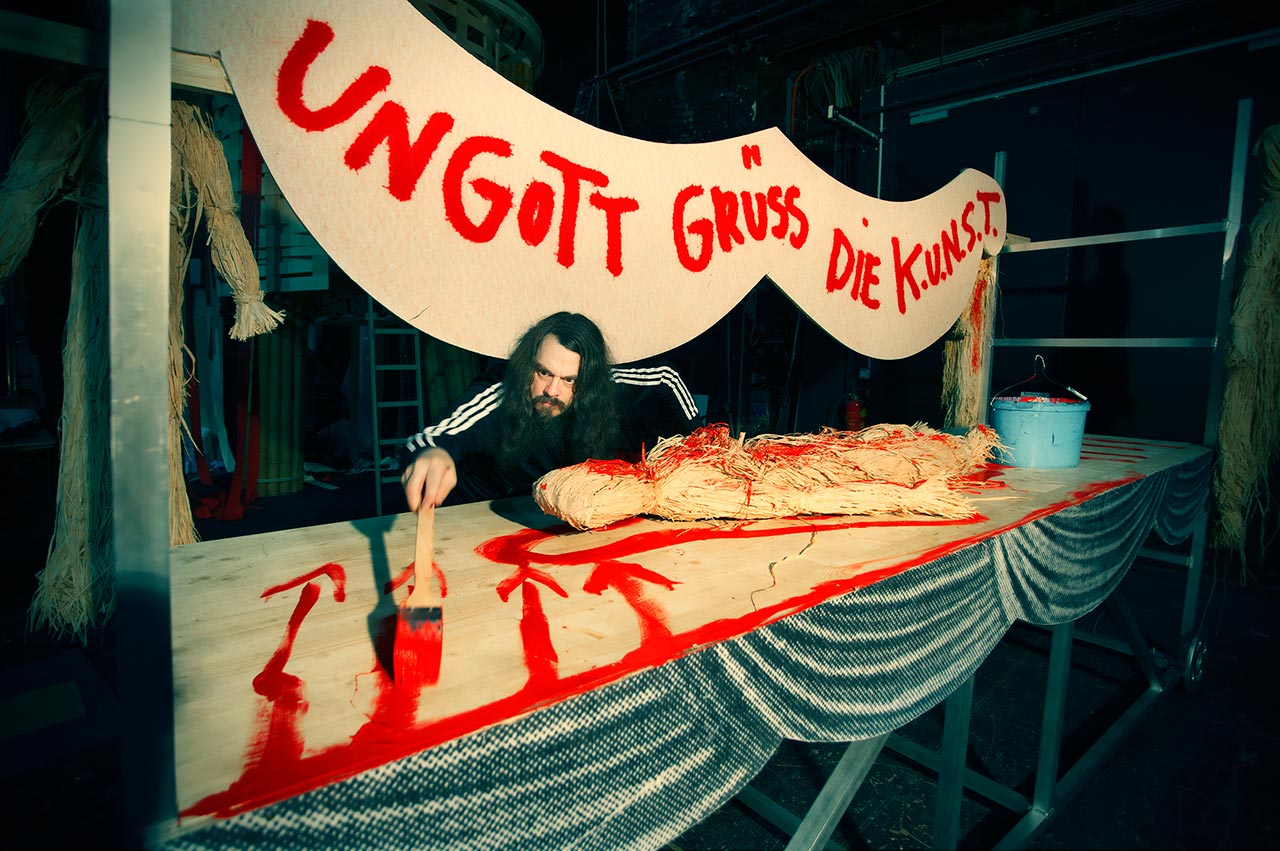 Jonathan Meese’s work is a riddle of historical, political and cultural references. The controversial artist, infamous for his flagrant use of Nazi iconography is about to hit the stage in Vienna this weekend. Besides a chaotic cast of historical and fantastical characters questioning our inhospitable world, we’re not sure, as always with Mr. Meese, quite what to expect.

MOONPARSIFAL ALPHA 1 – 8 (Archmatriarch of Espionarchy), a collaborative re-invention of Richard Wagner’s influential final opera Parsifal with composer Bernhard Lang, will premiere this Sunday, 4th June at the annual Vienna Festival (Wiener Festwochen). Meese has in the past worked with some of today’s most influential artists, including painting and collaging with Albert Oehlen, and putting on an exhibition with Daniel Richter inspired by the grave of Archbishop Gottfried von Arnsberg. The tirelessly multifaceted Meese now continues his collaborative process as director, stage and costume designer in partnership with Wagner and Lang. By incorporating the creativity of others, be they living artists, influential figures from the past, or even fictional characters, he opens up discourses far beyond his own scope.

In a world in which we have become virtually numb to images of nudity, violence and suffering, Meese’s most manifest contribution to his work is his ability to grab our attention (and fuel the flames of his notoriety). While his use of contentious material and religious iconography can be seen as offensive, it is nevertheless a boldly unrestrained exploration of human behavior, and we can’t hide from it.

Meese has a complex language that tightly binds together sources of admiration and criticism, though it’s not always clear what he’s admiring and what not—perhaps that’s part of the performance. In referencing Parsifal throughout his oeuvre, he pays homage to Wagner’s complex, mythical oeuvre and his musical genius, while deconstructing the great composer’s work through playful juxtapositions. Wagner’s staunch anti-Semitic, religious and nationalistic views are not dealt with head-on, but are mingled into a shambles of absurd references. In his prints as much as in his paintings and productions, Germany’s modern-day iconoclast creates uninhibited pastiches with Wagner and Parsifal appearing ridiculously alongside Humpty Dumpty, fictional flying stone head Zardoz, and a hang-man rocket.

Stripped of its overwhelming religious pathos, Wagner’s operatic masterpiece is about looking past the horrors of the present day towards beauty and fantasy, or alternatively a meditation on how, in Meese’s words, “reality is shit, art is super!”. The protagonist Parsifal is an astoundingly simple-minded man, who goes through life oblivious to its hardships, protected in childhood by his mother, and later by the greatness of God, thanks to his unwavering faith. The role of Parsifal’s mother, who shelters him with her love and when abruptly abandoned, takes her own life, is also not to be overlooked. Meese, who at the age of 47 still lives with his mother and is rarely seen without her by his side, is not likely to abandon her any time soon, and pays homage to her throughout his oeuvre.

Meese’s spirited work seeks to dismantle the way we look at our world through playful medleys—the resulting work, though often bewildering, is at once a temporary escape and a brusque confrontation. The upcoming sci-fi production of Parsifal promises to take us to a far-away future, back to the past, and out of reality altogether, all at once. We can be sure to expect an extraordinary performance in Vienna, certainly as challenging as Wagner’s Parsifal. It is a fantastical world that we are invited into in his latest creation, best described by Meese himself: "Slice me Nice! The mythical figure world of Wagner (Parsifal, Kundry, and Klingsor) meets a future moon-base inhabited by Richard Wagner, as well as by Fancy, Marlon Brando, Zardoz, Wickerman, and Barbarella. An electrified Eagle Transporter hovers over the picture; there’s a giant straw doll for Thanksgiving; the Fellowship of the Grail is still tirelessly awaiting its discovery. But, in the meantime, something has fundamentally changed...”