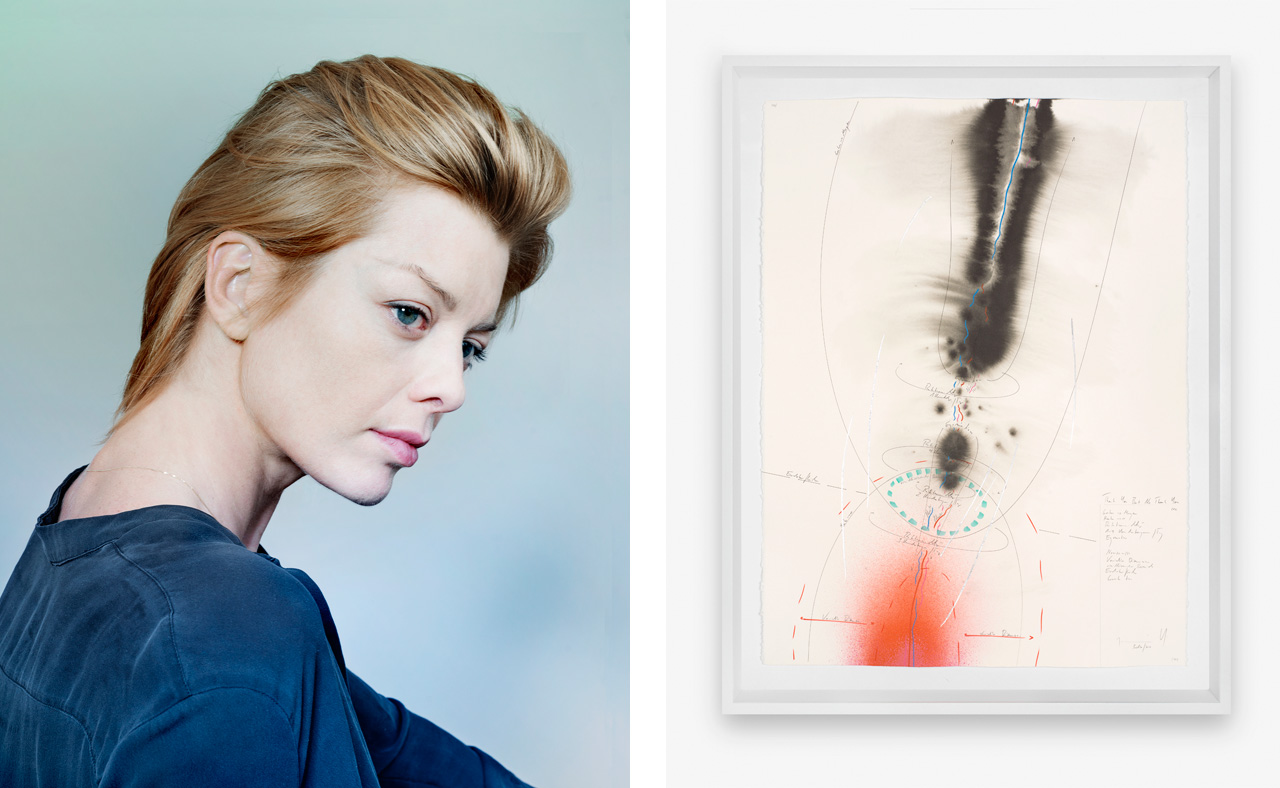 Writers are always scrambling for ways to describe the artwork of Jorinde Voigt; that it swells and moves like music, that its gracefulness is offset by its own elegant sobriety, that it is a churning interplay between scientific truth, billowing chaos and high-sensuality. It is quite simply impossible not to slip into “Artspeak” when writing or talking about her work, for it defies categorization and easy explanation. Her work occupies the everyday and the metaphysical, the spontaneous and the meticulous, constantly harnessing contradictory and opposing elements—stunning flights of fancy in an endless tussle with rigorous precision.

Using her unique visual vocabulary, Voigt has always been able to do something few artists are capable of achieving, to depict abstract phenomena such as space, time and even the earth’s rotation. The ungraspable, powerful forces “every human experiences every day”. Perhaps more than anything her works urges us to heighten our sensitivity, to zero in on our state of consciousness and to take a step back, and consider the passing of time itself. 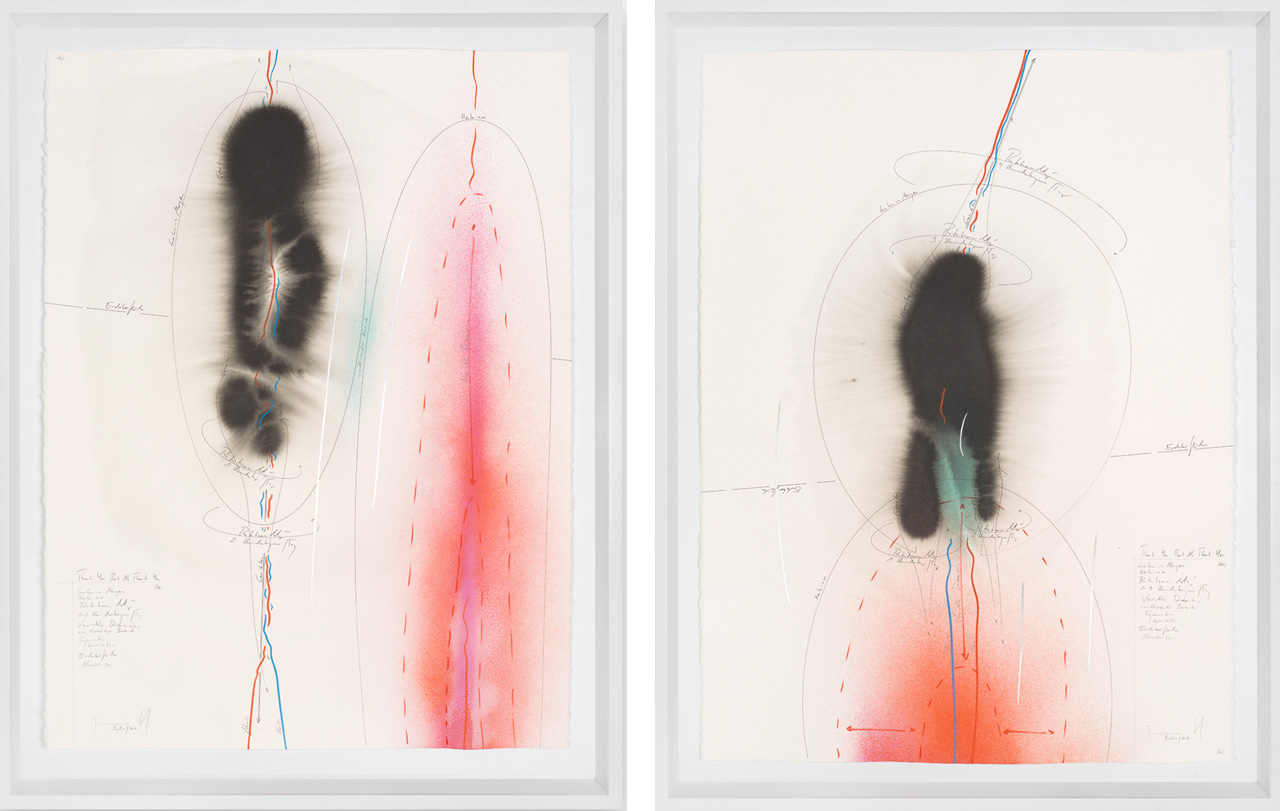 Born in Frankfurt am Main in 1977, she initially took up the study of philosophy and literature at the University of Göttingen and the Freie University in Berlin. Then in 1999, with increasing interest in the visual arts, she enrolled at the Berlin University of the Arts. Having already exhibited at MoMA and the Venice Biennale, and with a new show just opened at the Nuremberg Kunsthalle, Voigt, who has long been at the vanguard of a pulsating Berlin art scene, is fast becoming an artist of international acclaim.

In each of three limited editions of Thank You But No Thank You, 2017, the sensual forms are suggestive of faraway galaxies, molten cores or even the notes of a scientist. These radiating visual forms are framed by her handwritten annotations, arrows and matrix of lines that enact an interplay between the subjective and the objective, between the universal and, what to the artist is highly intimate.

In all three the horizon has been clearly demarcated, a fundamental symbol for humans that provides orientation and alignment—a fixed point in the distance. While words like “Egomotion, and Rotational” broaden and obfuscate, as she follows her one true goal, to discover “what is it, what surrounds me?” Playfully allowing the artworks to form a spontaneous yet systematic chronicle of the forces that influence us. A highly accomplished musician she believes her work is like music, “You can enjoy it without being able to read the score.”

Limited to an edition of 50, with hand-applied aluminum cutouts, each artwork is signed by the artist and comes in a new whitewashed wooden frame. 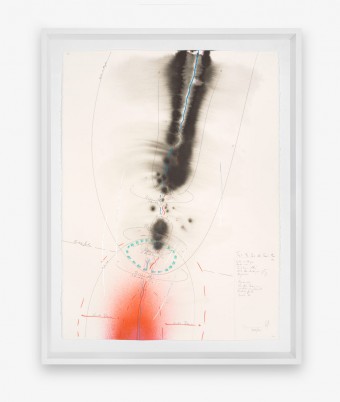 Jorinde Voigt
Thank You But No Thank You I, 2017 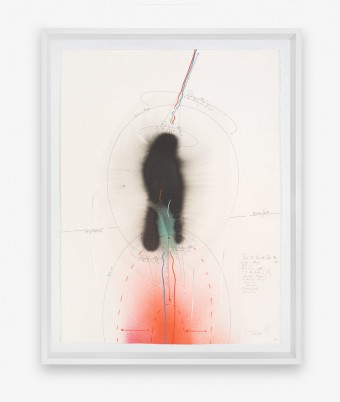 Jorinde Voigt
Thank You But No Thank You II, 2017 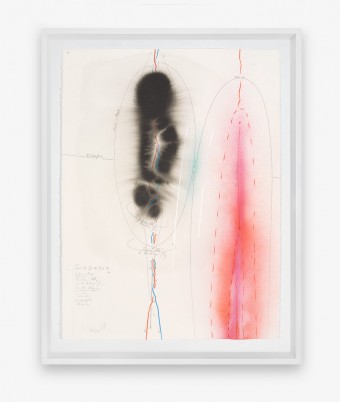 Jorinde Voigt
Thank You But No Thank You III, 2017