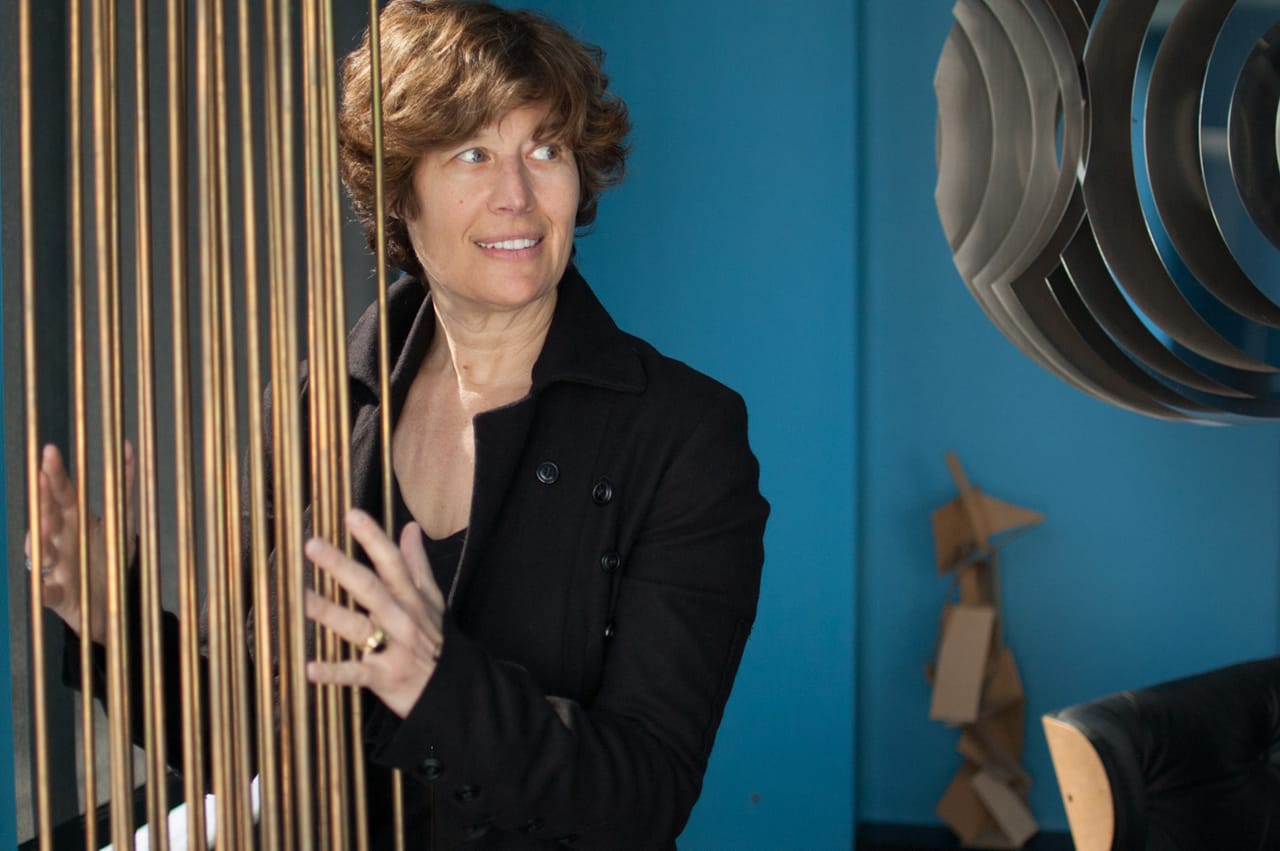 “My grandmother left her other grandchildren money but I got these sculptures—the sweeter deal.”

Passionate New York art collector Linda Ginsberg is the founder of an elite legal recruiting firm focusing on partners in law firms. She tells us about supporting starving artists and keeping provocative artwork under the bed!

FAM: The blue color that your apartment is painted in is very striking. What provoked this aesthetic decision?
Linda Ginsberg: In 2001 when I bought my very first apartment of my own, I thought white stood for “rental”, so for me a different color constituted ownership. When I told my decorator I wanted a color, he said “Great, what’s your favorite color?” I said blue, but I can’t have a blue apartment. And he said: “Why not? Make it blue”. So I did. That was 15 years ago. Today I would definitely paint the apartment white but my kids won’t let me! They identify it as home—and can see when I am home from about a mile away as the blue lights at night are a beacon in the neighborhood. 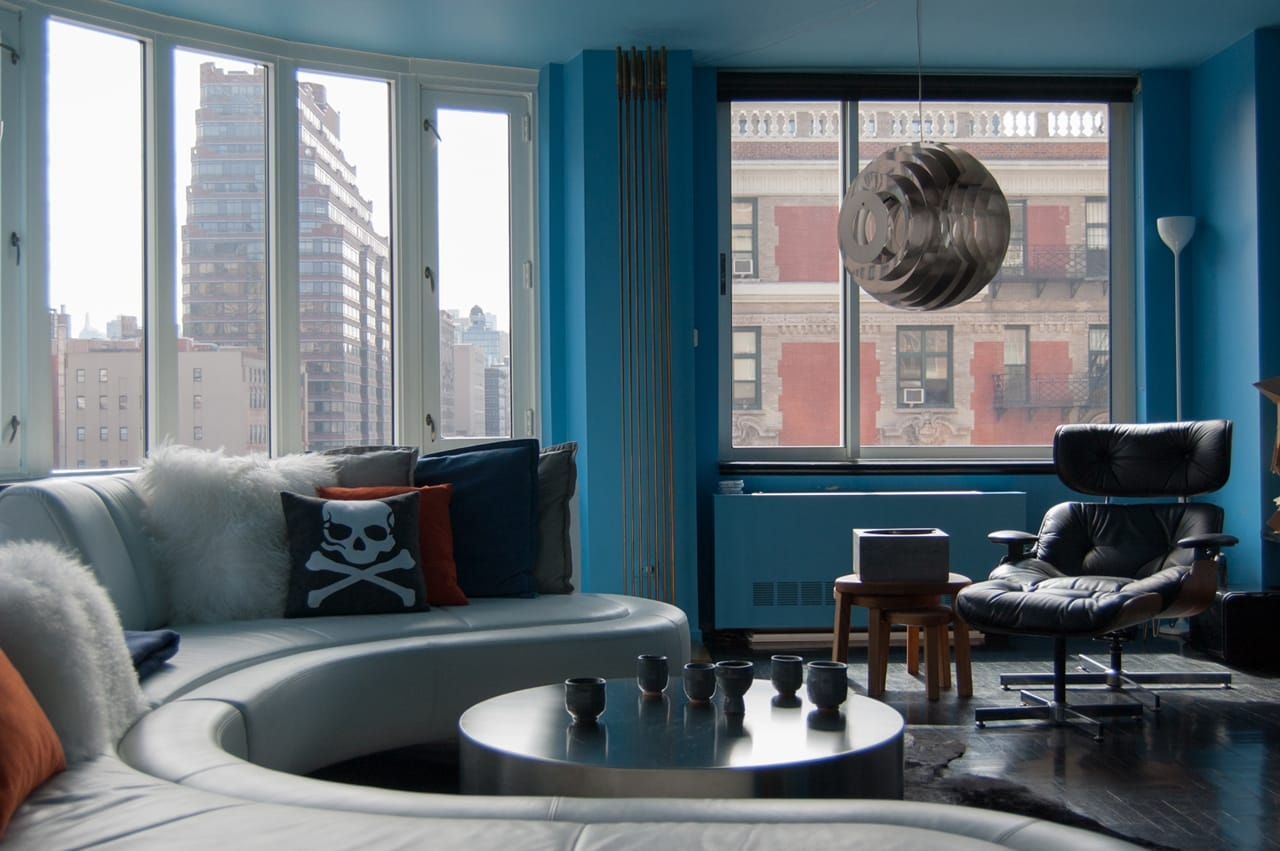 When did you start collecting art?
I first became a collector in 2003, when I started to become successful as a recruiter.

What’s your favorite work that you have up now in the apartment?
I’m a bad rotator, even though I have tons in storage. But I’m attached to everything here. My most sentimental pieces are these two sound sculptures by Harry Bertoia, an Italian artist who worked in the US and is best known for his ubiquitous wire chairs. My grandmother bought them from the artist himself in the 70s and when I was growing up she would let us touch them. As a kid it feels subversive to be able to touch art—and the very purpose of these is to “boing” them together so that they make this chiming sound. When my grandmother died she left her other grandchildren money but I got these sculptures—which I think was the sweeter deal. These days, when I “boing” them in my apartment I always look up, say hello, and can hear her laughing in delight. 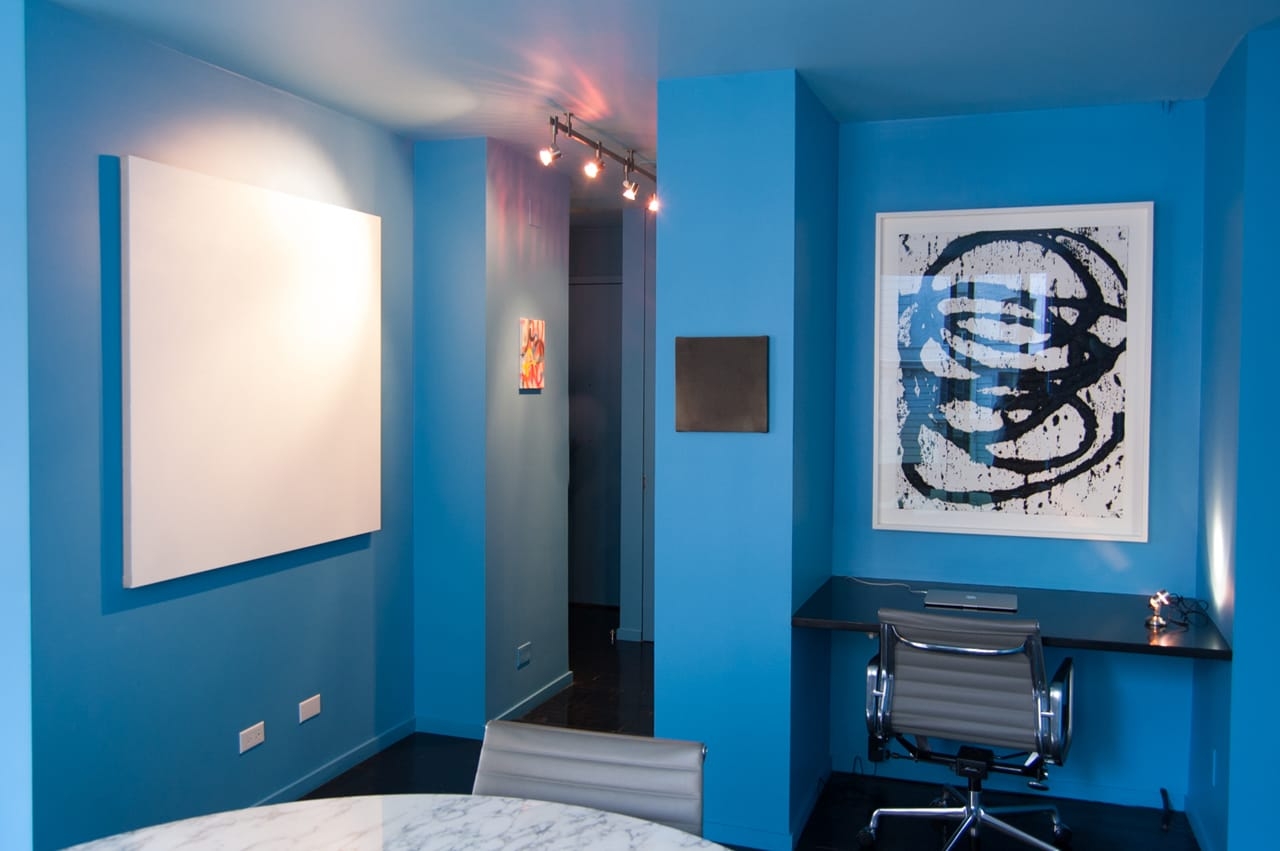 Do you have any works of a political nature?
Yes, I am a huge fan of the French artist Anne-Lise Coste’s work. She combines poetry with protest and comments on political and personal issues with a rebellious honesty. Her style often reminds me of street graffiti, but she uses airbrush, pencils, pastels, markers and watercolors to give her gestures permanence by materializing them on paper or canvas. Her work does not follow any rules and yet there is a harmony and delicateness to it. I own more of Anne-Lise’s work than that of any other artist and it is all different. Her range is vast. But if you know her, you can follow the thought line from this Picasso-like portrait to this brilliant Lee Ufan in France to perhaps her purist text piece, Poem. If I collected works from no other artist, I would still have an amazingly diverse collection. 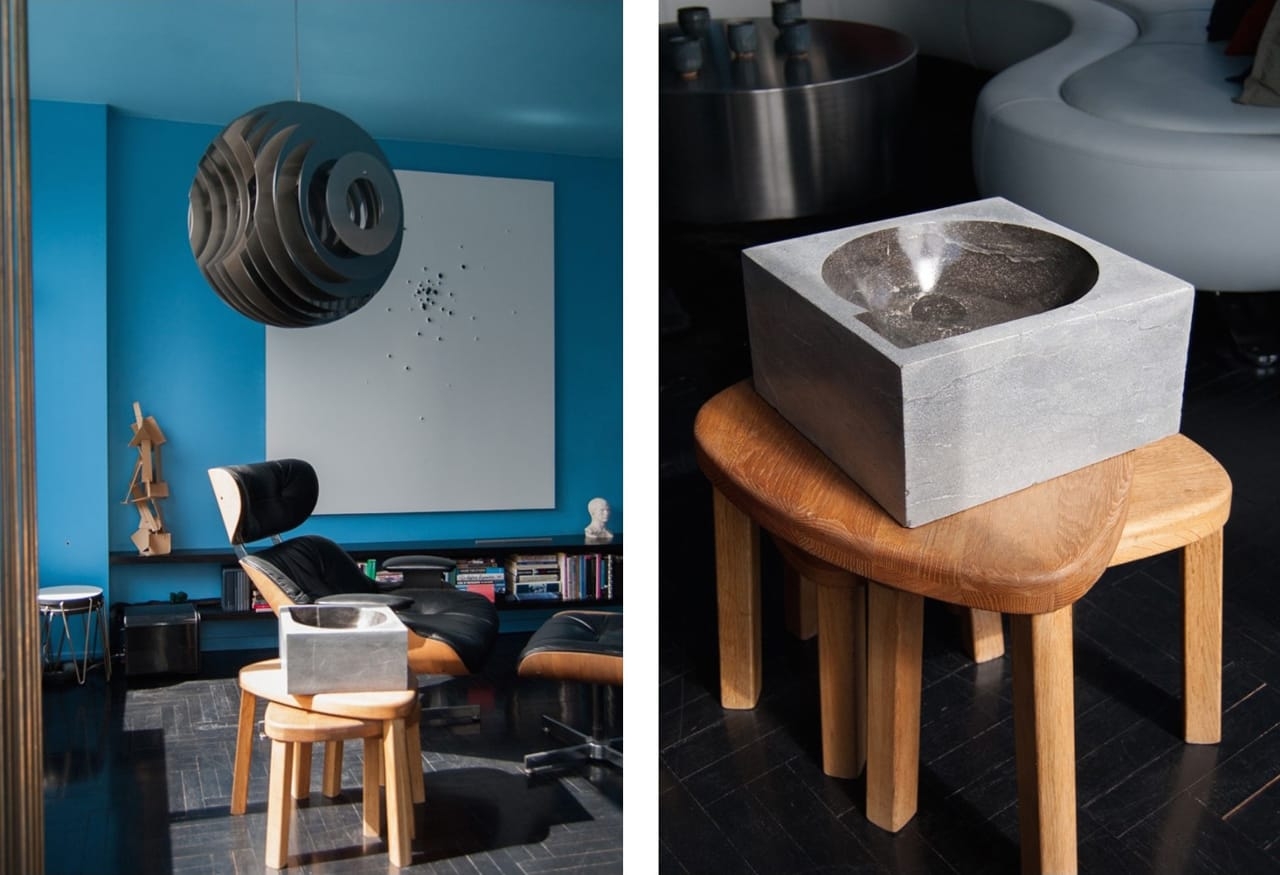 Could you tell us something about this site-specific work above your television?
Everybody gravitates to that. It is by Harold Ancart, a young Belgian artist. He was the first “starving artist” that I befriended, and I believe this is the first piece he sold in the US. After visiting his studio I knew I wanted something site-specific but wasn’t sure what or where. One night as I sat on the couch looking at that corner I knew instantly where the work needed to go. It is basically pigment thrown against the wall, and the piece has this light touch. His other work has more pigment but in 2011 Harold was young and new at installing in people’s houses, and was sweetly concerned about messing up the apartment. 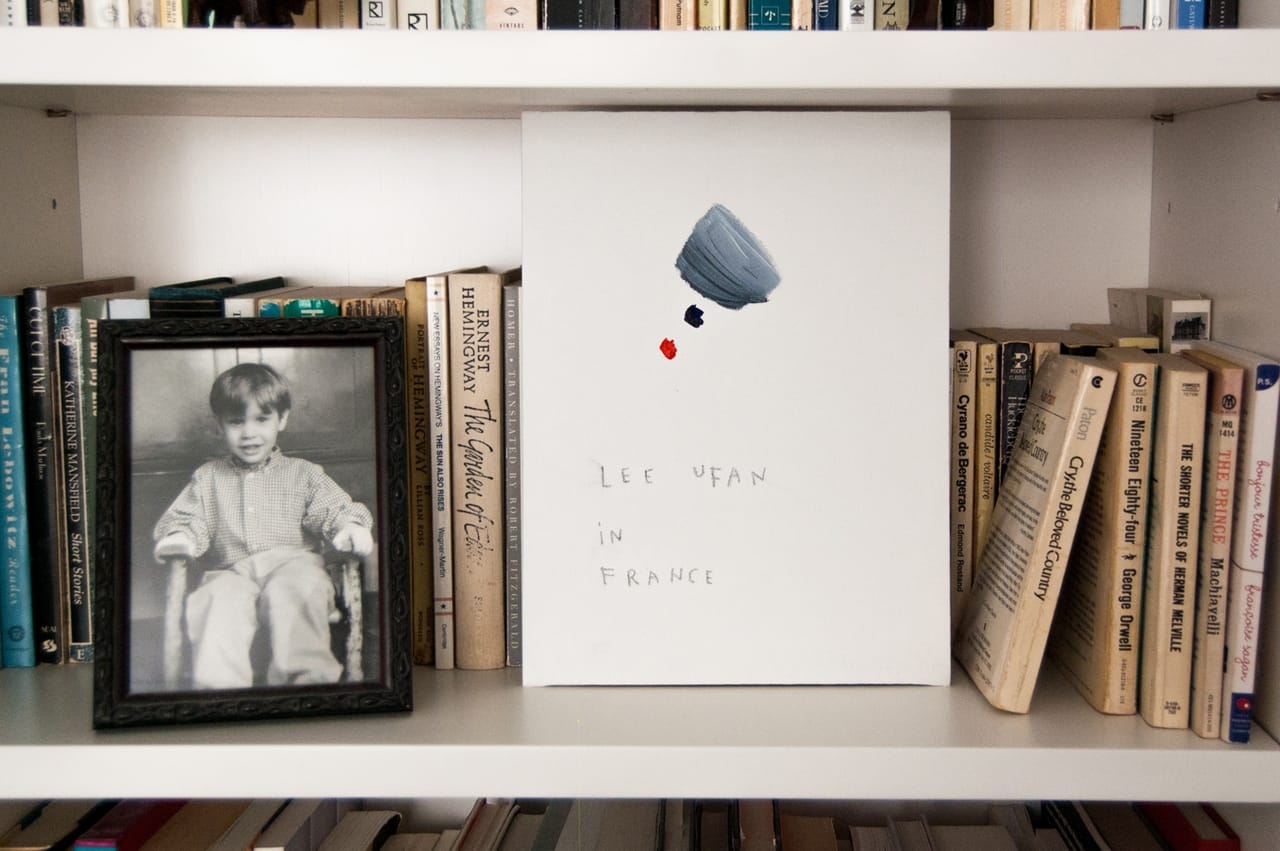 Do you have a preference for supporting “starving artists”?
I go back and forth. On the one hand, I love supporting young artists. I’ve met almost every artist that I’ve bought work from and they are fascinating people—some have even become dear friends! But on the other hand, living the struggles they face to advance their career can be tough, right? The art world is tough. It’s like what Ernest Hemingway said about bullfighting: “It was not nice to watch if you cared anything about the person who was doing it.” On the other hand, I recently bought my first piece by a dead artist (a series of 30 prints by Agnes Martin) and felt bad about it, because I’m not supporting the artist with this purchase. I love the work, have tremendous admiration for the artist, but she gets no lift from my buying it. So yes, we can say I care deeply about artists. 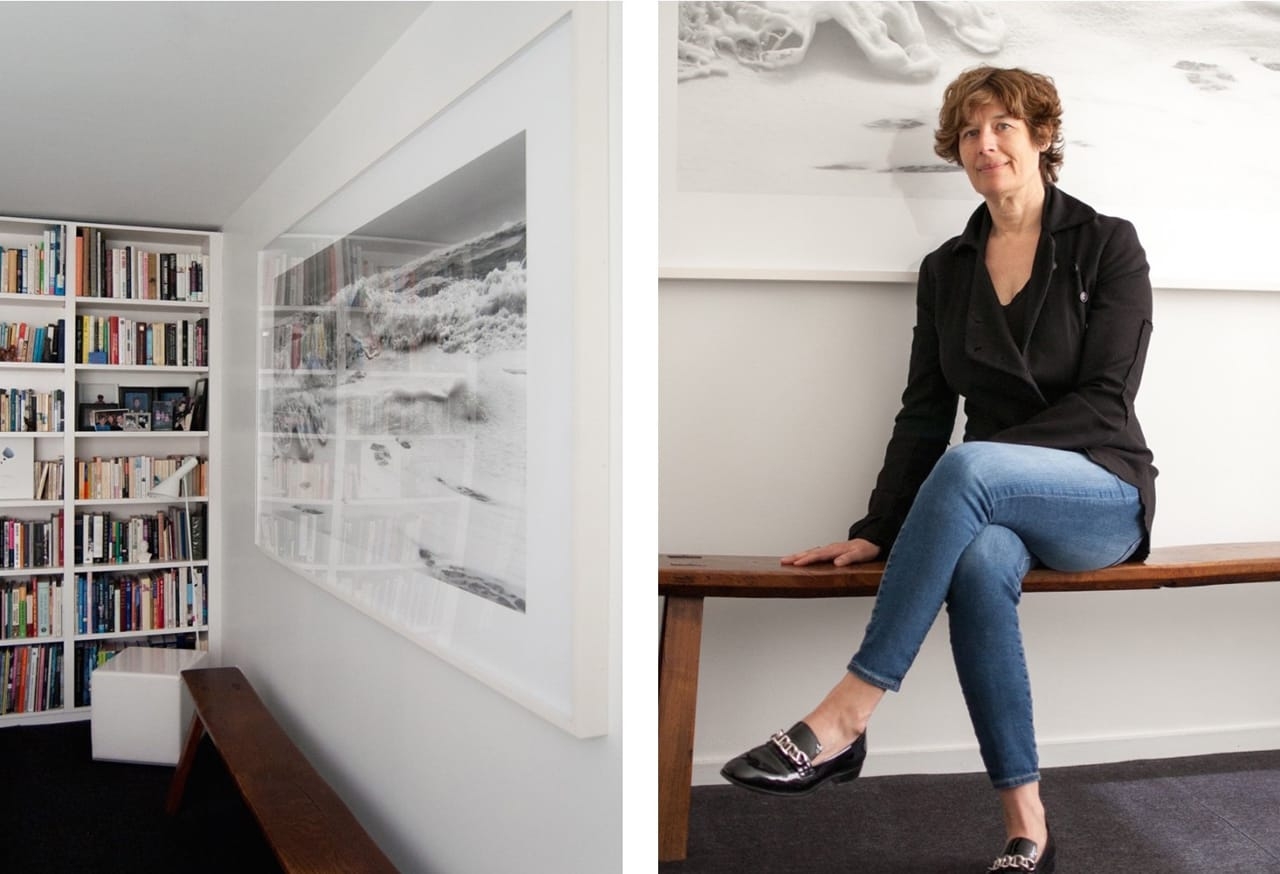 That’s a fun and somehow welcoming piece you have up in the kitchen next to the fridge. Can you tell us about it?
Yes, that’s by Adam McEwen, a British artist who I met at a group dinner and instantly thought was terrific. He did a series of these shop signs, but this was the most aggressive. Initially I wanted to buy one of the signs, but not this one because I had young sons at that point and could not even say the word in front of them, let alone hang a sign of it. The gallerists insisted that this was THE one to buy, so I bought it and it stayed under the bed for four years. When I pulled it out, my kids were intrigued but wary of whether it being art made it OK. Now it’s just part of us and has entirely ceased to be provocative. 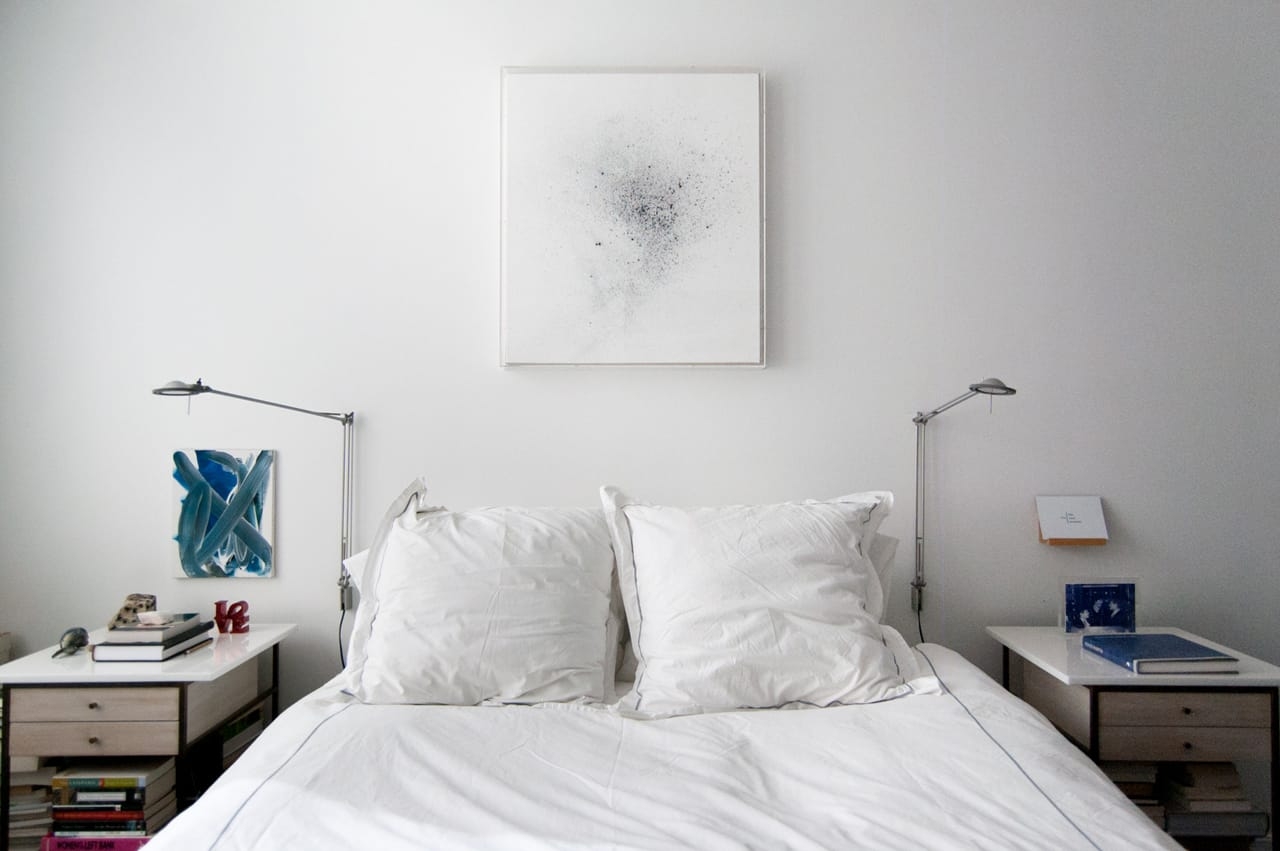 Your kids have art in their rooms as well. Are they collectors?
My kids appreciate the art and have selected pieces they admire. They now give tours of our collection and “boing” the Bertoias for their friends. Once on vacation we bought a Damien Hirst print for each kid as their first investment in art. One of my kids proudly displays a little Jeff Koons balloon dog sculpture which we bought for $300 and now sells at auction for an additional digit. One of my favorite pieces in this apartment is this cardboard piece that was made by my then eight year old son, a Duchampian homage. I feel like it holds up in this room. 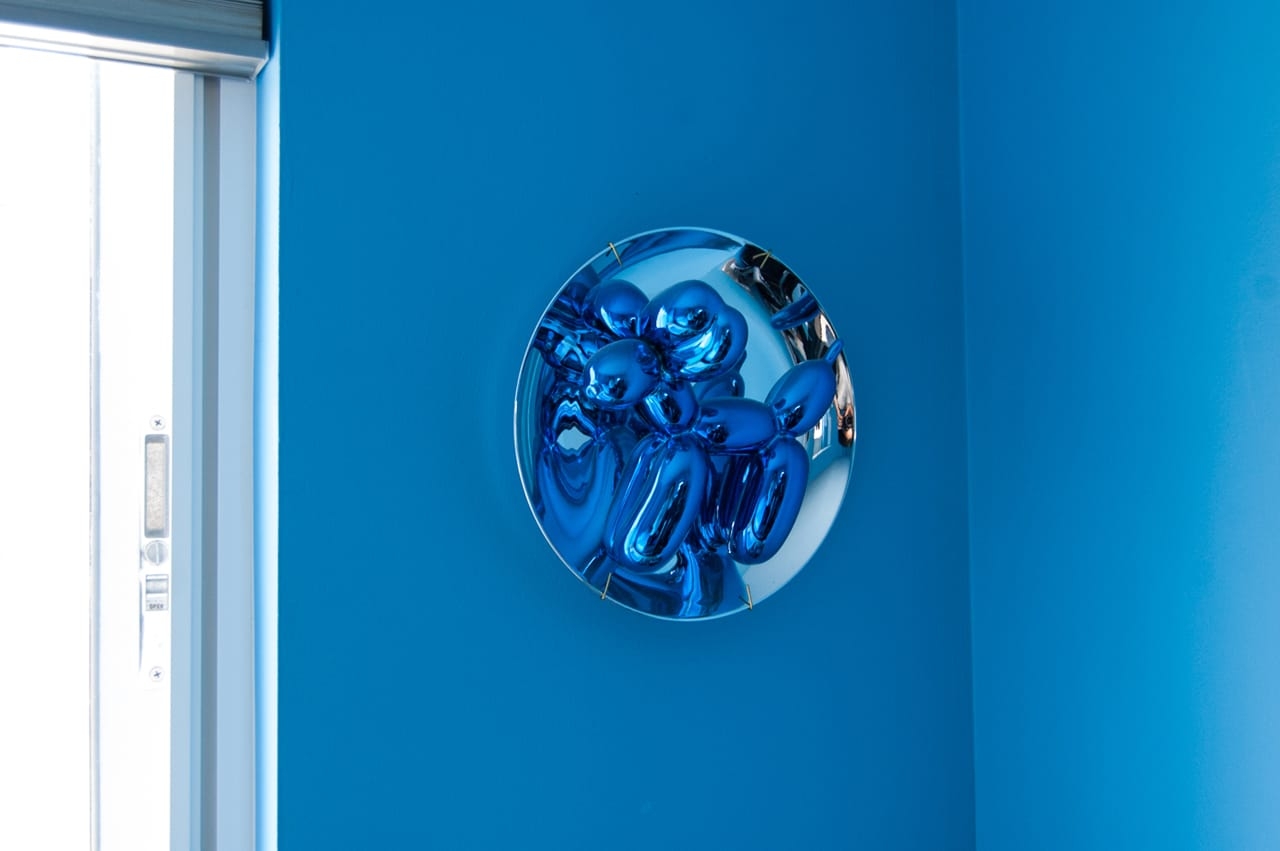 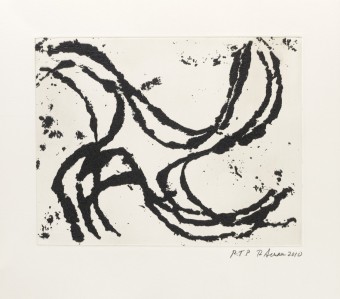 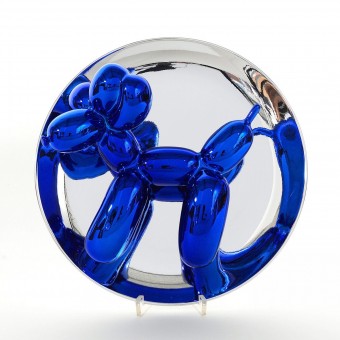