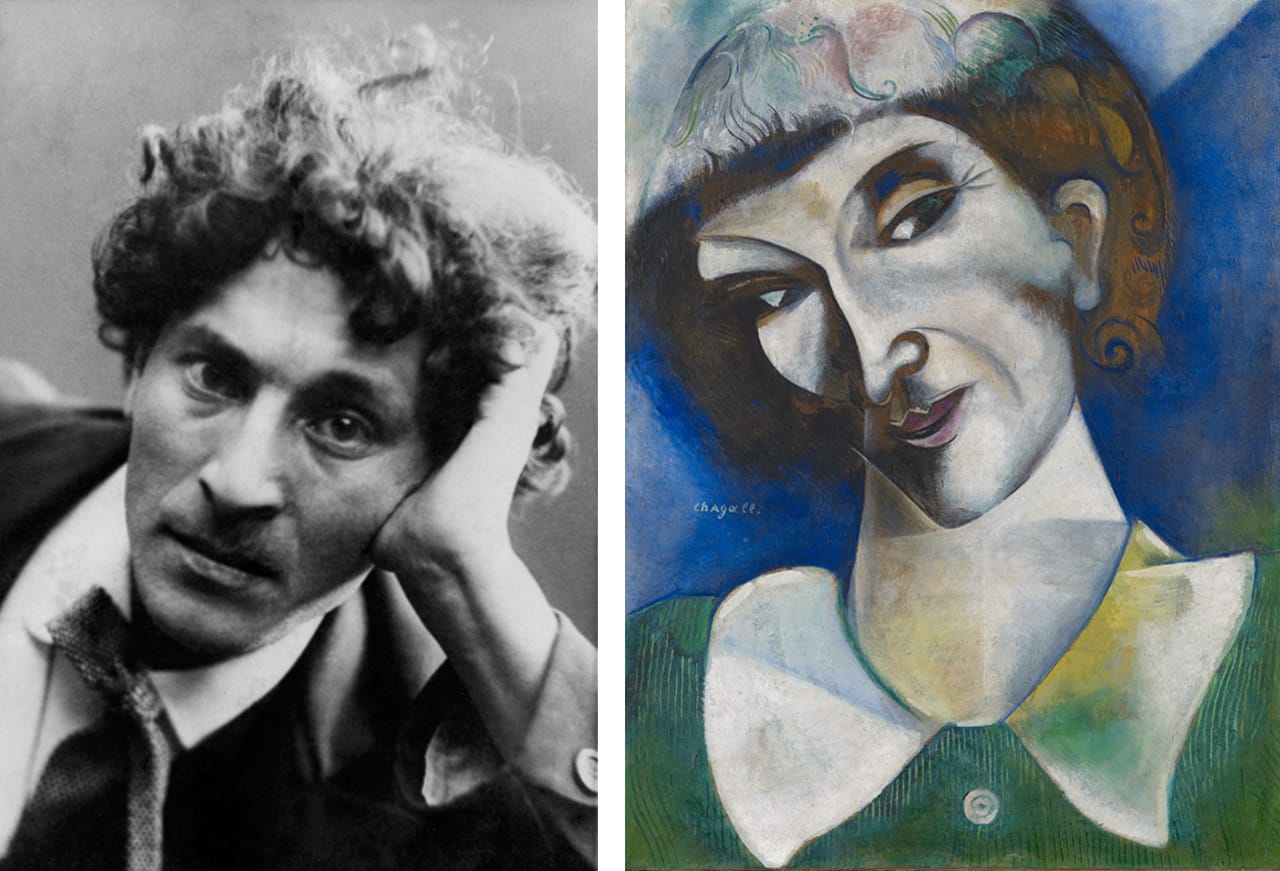 Filled with flying musicians, violin playing goats and embracing lovers, the dreamy canvases of Marc Chagall speak a uniquely imaginative visual language. Born Moyshe Segal, the Russian-French artist is renowned for his strange use of perspective and synthesis of different modernist styles, combining a Cubist language with elements of Fauvism and his own distinctly poetic narrative. He was heralded as the godfather of Surrealism by the movement’s founder André Breton, who declared that “under his influence, metaphor made its triumphal entry into modern painting.” But as a Jewish man living through some of the most momentous and horrifying times of the 20th century, Marc Chagall’s greatest achievement was even being able to make art in the first place.

Born in a part of Russia called the Pale of Settlement, in a town called Vitebsk (now in modern day Belarus), Marc Chagall and his family lived in a segregated Jewish community. The Tsarist Empire had strong laws against Jews that prevented them from living in central Russia and so they were forced to the borders. They created market-villages called shtetls where life was characterized by poverty, a complete lack of art and education so poor that Chagall’s mother bribed officials to allow her son to attend a nearby Christian school. 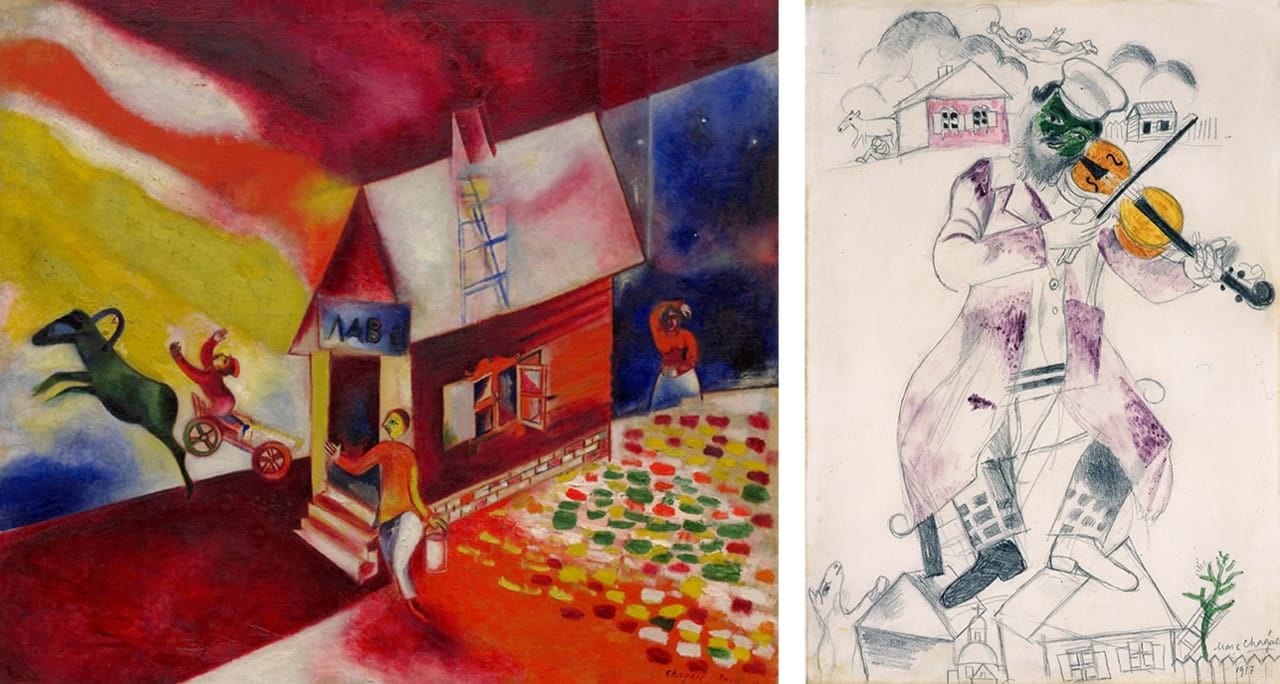 Shtetl life profoundly impacted Chagall’s work, particularly his early pieces. Noticing that the traditions of his childhood were disappearing, he depicted them in paint, taking subjects from Russian folk art as well as his roots in Hasidic Judaism. He differed from the European painters who came before him, not seeking inspiration from exotic lands but rather engaging with his immediate reality. Local farmers and beggars, visiting rabbis, farm animals and his family are all rendered in a touching manner in his works. Through a slight distortion of their figures and abstract backgrounds, Chagall absorbed them under a Modernist rhetoric, using their earthly context as symbols in his dream-like worlds. Even his airborne subjects speak of his upbringing, representing wishes for freedom—something which was completely foreign to a Russian Jew during this time (they would have to request a license to even go to the nearest town.)

Marc Chagall did manage to leave his hometown however in 1907 to study art in St. Petersburg. Afterwards he briefly returned to Vitebsk before moving to Paris in 1911. In the French artistic metropolis, he changed his name to Marc Chagall, met Pablo Picasso and first dabbled with Cubism. In 1914 he returned to Vitebsk to marry his fiancée Bella, originally only intending to stay for three months. However, with the outbreak of World War I, rising tensions across the continent and the 1917 Russian Revolution, he became trapped and was forced to stay in Russia for nine years.

Alongside his Jewish identity, Marc Chagall’s wife was a profound inspiration and details of their relationship fill his enchanting canvases from this period. The Promenade—painted in 1917 after the Russian Revolution and shortly before the execution of the Tsar—is a poetic dedication to Bella. Floating off into the air, she here denotes the weightlessness of love, a theme similarly explored in Chagall’s famous The Birthday from 1915. This work captures the story of one of Chagall’s actual birthdays, with the couple’s heads both twisted to meet the other, testament to the gravity-defying magnetism of their relationship and a challenge to Bella’s upper-class parents who did not approve of the union.

As Fascism began to spread across Europe during the 1930s, Chagall’s subjects shifted away from the love and desire of his marriage. His work began to become more political and less whimsical, using appropriated Christian imagery. From 1937 onwards with Nazi atrocities against Jews increasing, Chagall began regularly exploring the icon of the Crucifixion, re-centralizing Jesus’s Jewish martyrdom. Melancholic in tone, these works compared the suffering of European Jews with Christ’s and are uncharacteristically devoid of color—marking a departure from his earlier colorful documentations of his childhood and Jewish community. 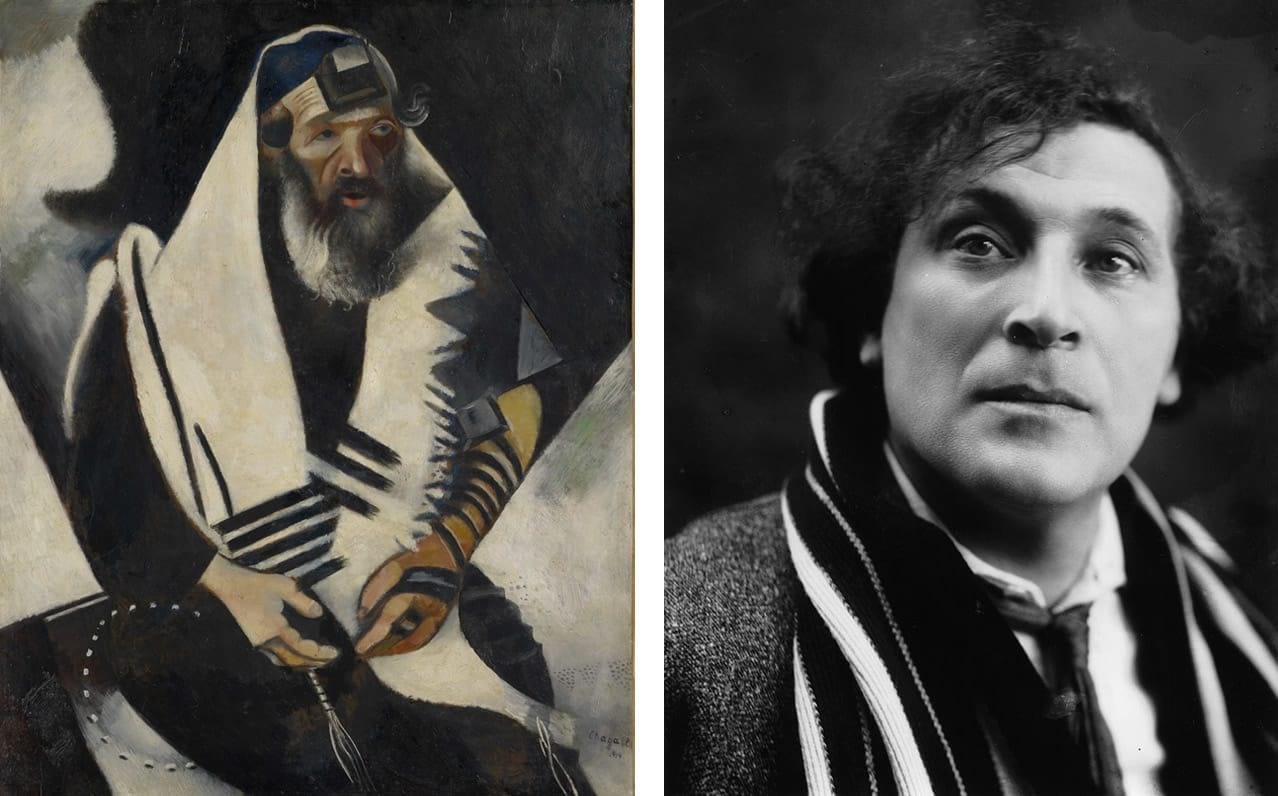 Marc Chagall was the last surviving master of European Modernism, dying in 1985 at age ninety-seven. His career spanned eight decades and saw him experience some of the darkest moments of the 20th century. His depictions of Jewish life and portraits of religious figures such as Jew in Black and White from before the 1930s are shocking when viewed with knowledge of the events to come. While the fantastical and magical worlds of Chagall’s paintings are inspired by notions of desire and love, his practice is ultimately sparked by his Jewish identity and was epitomized by the artist in 1922: “If I were not a Jew…I wouldn’t have been an artist”.

Chagall—The Breakthrough Years 1911-1919 is on display at the Guggenheim Museum Bilbao until September 2, 2018. 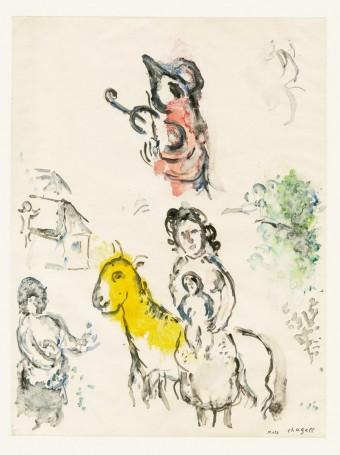