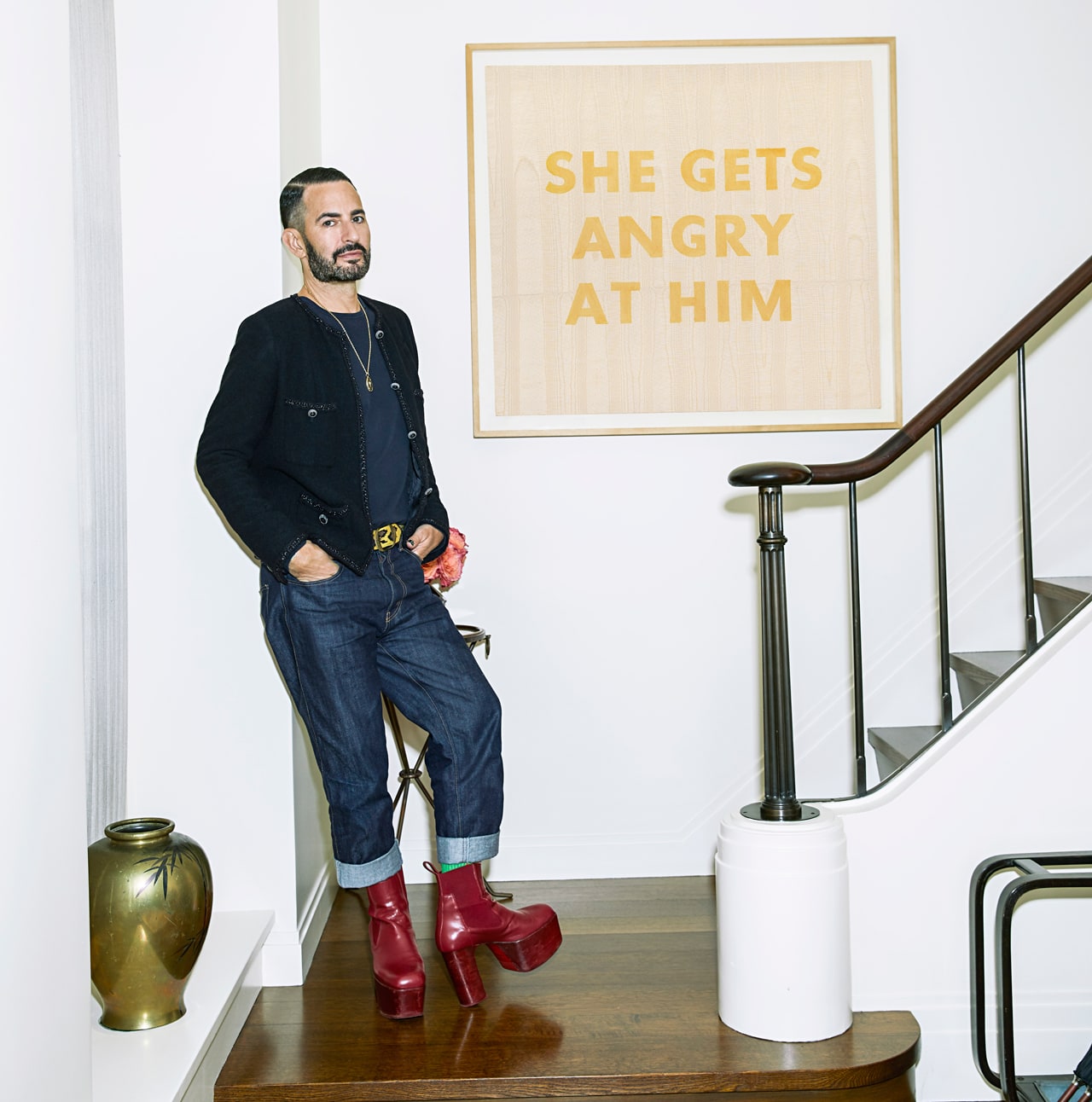 Marc Jacobs in his apartment in front of an Ed Ruscha She Gets Angry At Him. Image: Courtesy of Sotheby’s
1 year ago

As you’d expect from the man who singlehandedly transformed the fashion industry Marc Jacobs does not do things half-heartedly. When he took over the creative director role at Louis Vuitton in 2003, turning it from a dusty trunk maker into France’s premier luxury goods house with a turnover of $1 billion, he did it by upending the industry’s view on streetwear and producing megahit accessories. His marriage proposal to his husband was no intimate affair but a meticulously choreographed flash dance in a Chipotle restaurant with the wedding later taking place at The Four Seasons. He does everything with totality and that commitment of mind is now focused on his own art collection as he decides not to sell off a few pieces but his entire collection, completely emptying out his properties in both Paris and New York.

In a number of separate auctions beginning in November, Sotheby’s New York will be auctioning off over a 150 of his artworks: and if you are wondering whether this fastidious tastemaker’s discerning eye transfers to contemporary art – it certainly does. From exquisite watercolours by Elizabeth Peyton to rare Mike Kelley editions and masterpiece paintings from John Currin to Ed Ruscha, his collection provides an exquisite snapshot of contemporary American art. 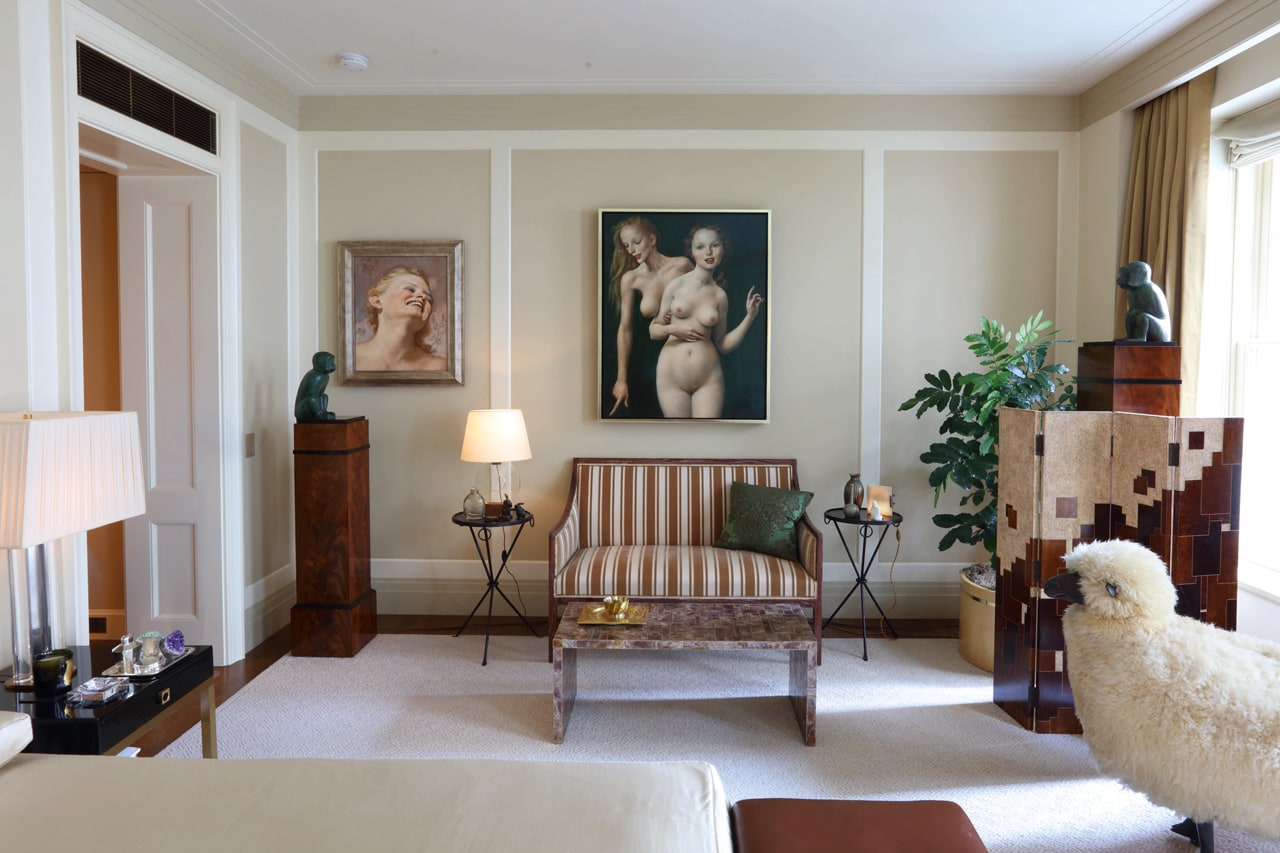 To accompany the auctions Sotheby’s have spared no expense in preparing a trove of promotional material including interviews with the designer as well as videos and articles. In one such interview Jacobs – who has been collecting for over twenty years – admits to being a bit of a late starter having felt “really intimidated by the art world”. This all changed however with a visit to a Mike Kelley exhibition at The Whitney Museum of Art in 2000, an exhibition that inspired him to buy two small limited edition prints made by the artist. This small purchase opened the floodgates and in a matter of months he was borrowing large sums of money to pay for work, collecting to the point that his long-term business partner and mentor Robert Duffy begged him to “Stop! You’ve got to pay your taxes!”

Pushing things to their utmost is clearly something Jacobs does a lot. He has an addictive personality. Two spells in rehab one for drinking and one for cocaine addiction have been replaced in recent years with a voracious smoking habit and a regular gym attendance. A process that transformed him from a scruffy, boyish figure of the early noughties to the slick, influential person he is today. 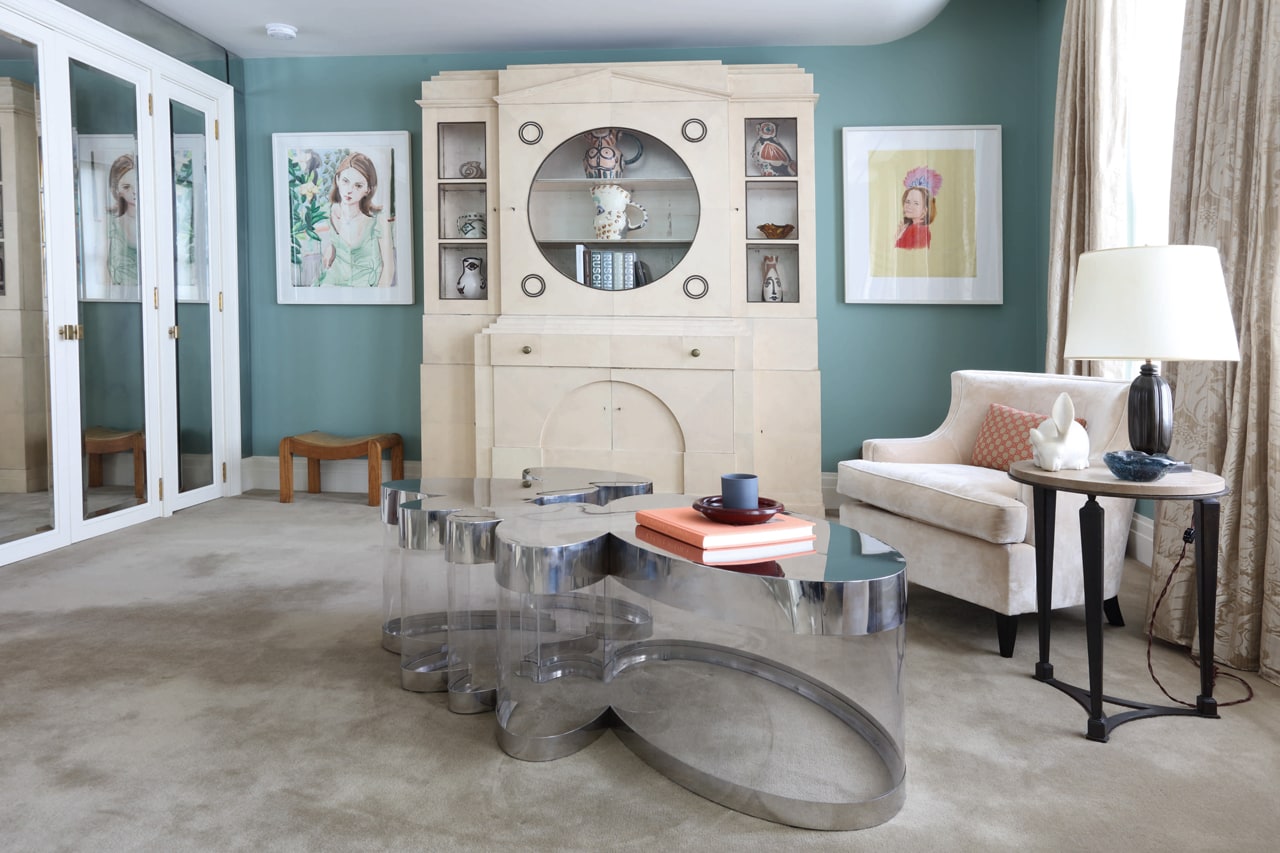 It is intriguing to discover that his relationship to art was a key factor in his success at Paris-based Louis Vuitton. When he first took up the reins he thought back to “this creative society when Chanel worked with Picasso, or when Elsa Schiaparelli worked with Jean Cocteau” and decided that rather than be an old-fashioned fashion-auteur he should be a collaborator and “invite in other creative people.” Takashi Murakami, Richard Prince and Yayoi Kusama all came on board and played with the fashion house’s key brand signifiers, the “LV” logo and famous monogram. It was a phenomenal success; the Murakami collaboration alone generated $300 million in sales.

Not only that but it put him in touch with some of the greatest artists of the day getting to know them “a little bit – some a lot” and all feeding back into his “interest in their work.” He first met Elizabeth Peyton whilst living in Paris, since then the American painter of a kind of alternative celebrity culture has become a great friend and “Whenever I was offered a painting or drawing that she did of me or someone I knew, couldn’t not buy it. I had to have it. I feel like they are this beautiful imagined photo gallery of my extended family.” A statement that makes it more than a little surprising that he has decided to part with the works: but then it has been a difficult few years for Marc Jacobs. 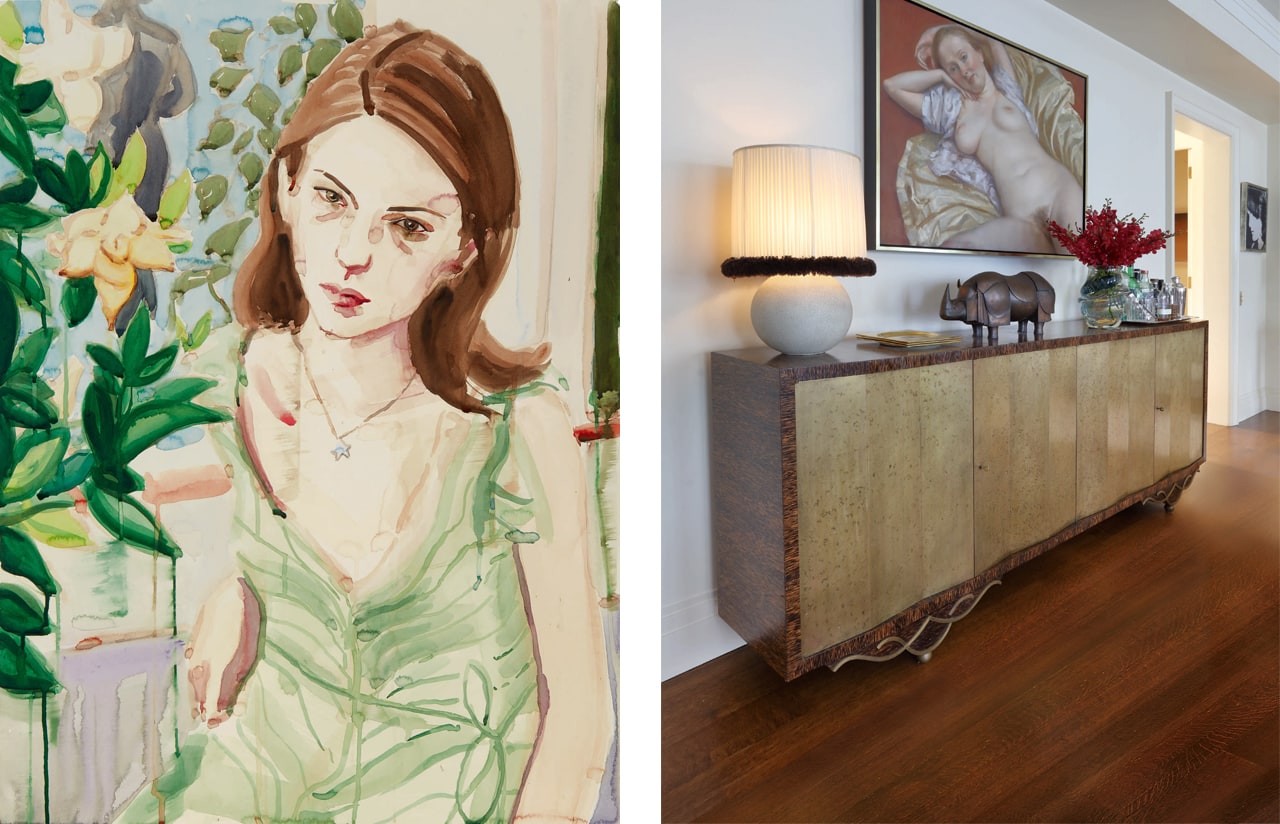 In 2017 Bernard Arnault the CEO of LVMH, the multinational luxury goods conglomerate who own a 96 per cent stake in Jacobs’ label spoke publicly about his concern with the brand’s escalating debt. A year later Jacobs closed down his affordable clothing line Marc and began culling shops amid layoffs and management restructuring. That same year The New York Times compounded his woes by publishing How Marc Jacobs Fell Out of Fashion, an article that suggested that the Marc Jacobs’ brand was not just in serial decline but might even be forced to close. Things are turning around however and Jacobs’ recent spring/summer 2020 collection was met with universal praise by the fashion industry.

Ahead of the upcoming auctions Jacobs does admit to having a hard time parting with the art works but “felt it’s time to give myself this window to start again.” Perhaps more at stake is “logistics” and space. Currently he is selling his Greenwich Village Townhouse for $14.5 million having purchased a Frank Lloyd Wright house in the New York suburbs but the problem with living inside a Wright masterpiece is that there isn’t “a lot of wall space to hang a lot of paintings.” A situation that gives him the chance for a complete makeover. 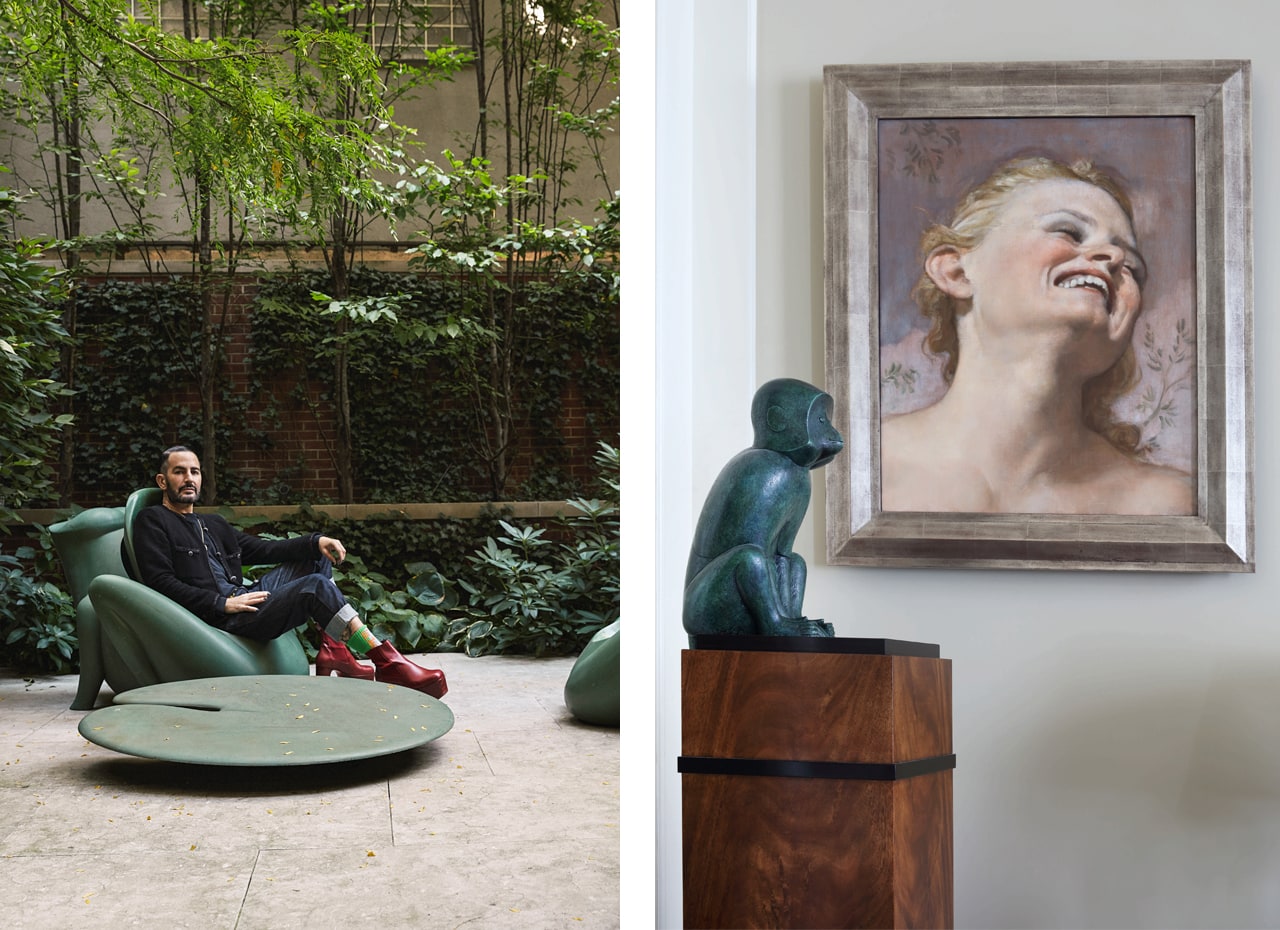 New husband, new house, a new art collection and a fresh start. In the same way that every six months the fashion industry refreshes itself and starts again Jacobs is in a “constant state of change”, it is what his aesthetic is known for, its constant reinvention and renewal. “I love what Steve Martin says,” Jacobs says about his art works, “that these things are not mine – I am a custodian for them.” At least for now, we get a chance to have a look around his collection before it is broken up and split permanently.