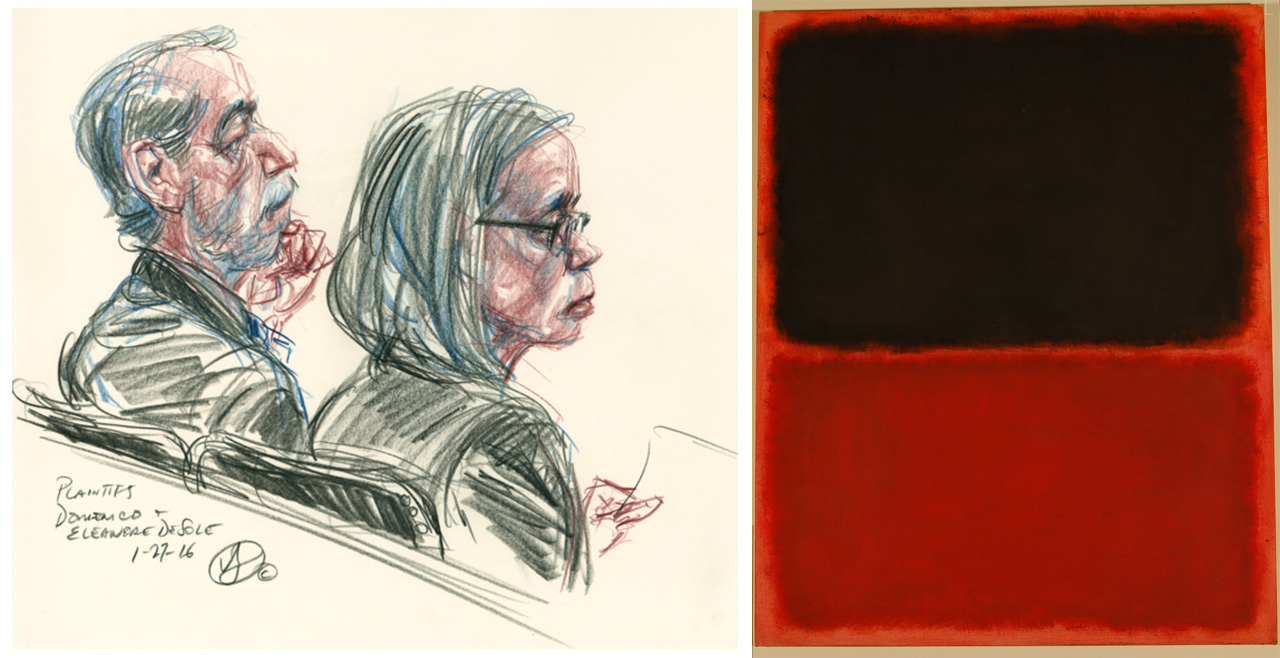 In December 2011, Eleanore De Sole and her husband Domenico, the former chairman of Gucci, were in their Miami hotel room getting ready to visit an art fair. That morning Eleanore was browsing through the news stories on her iPad when she came across a story that revealed that Knoedler & Co. – a gallery that had recently sold her a $8.3 million painting by Mark Rothko – was being sued by buyers over the sale of a fake artwork. As she read the full story she fell into a “shaking frenzy and cried”. She had recognised the provenance as being “exactly what we’d been told”.

Most of us will never know what it feels like to be duped, let alone possess, such a vast sum of money. But even without that knowledge, it is still possible to get a sense of the scale of humiliation the De Soles would have experienced having proudly displayed their fake Rothko in their home for 10 years. The De Sole trial as well as a further 9 claims made against Knoedler & Co, has grown to become one of the greatest scandals the art world has ever known. The fallout has not only made every high end collector shudder, but caused the downfall of one of the United States most venerable galleries.

Founded in 1846, Knoedler & Co. was the oldest art gallery in New York City. It did well selling Old Masters and boasted among its clients the banker, J. P. Morgan and Cornelius Vanderbilt. It enjoyed such an exalted position that the very notion of it selling anything other than a bona fide original would have been inconceivable. That was the problem – and in 2011, just months after the scam first came to light, the gallery was abruptly closed down.

Despite the gallery closing its doors, the De Soles took Ann Freedman the gallery president and Michael Hammer the gallery owner to court in early 2016. They wanted a trial to make public their vindication. But just before Hammer was expected to take the stand, a settlement was reached for an undisclosed sum that is presumed near double what they paid for the works. That should have been the end of it, with all future payouts being settled out of court. That was until last week, when the story suddenly took an unexpected turn.

A Manhattan federal judge in New York City has given two other plaintiffs the green light to sue Michael Hammer, the gallery owner, for liability. This is despite the fact that corporations usually confer on their owners limited liability. But the porous manner in which Hammer controlled his finances could prove his achilles heel.

It seems he regularly funnelled money from the gallery and used it for his own personal use. At one point purchasing 7 luxury cars including a $500,000 Rolls Royce. It does not matter that Hammer had no way of knowing that his gallery had sold over 40 expertly crafted counterfeits to unknowing clients. He too, it seems, is guilty of having put too much faith in the president of his gallery. 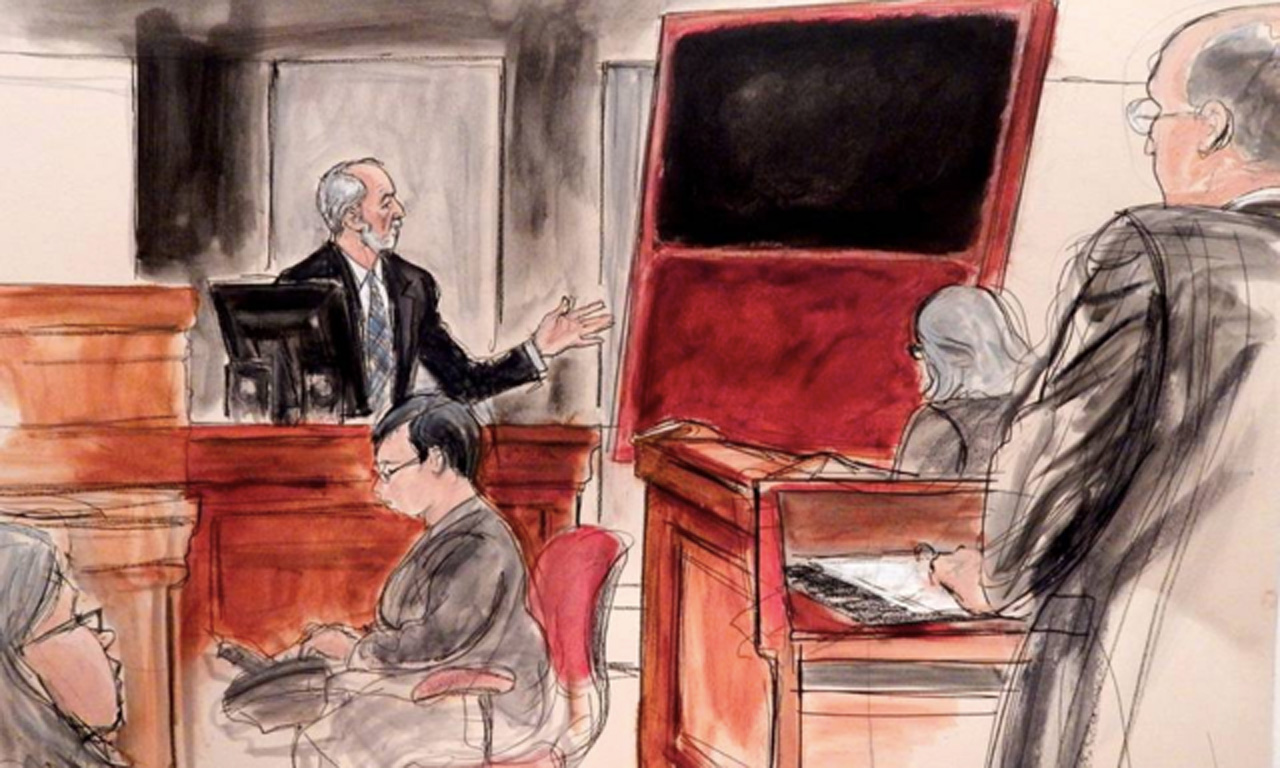 Ann Freedman was a natural saleswoman with a client list that read like a who’s who of the New York art scene. But her promotion to president in 1994 would prove to be a fateful year for the gallery. That same year the venerable Knoedler & Co., was to be visited by a woman previously unknown to the art world. Arriving in a Mercedes with a series of paintings rolled up in the back was the Long Island art dealer, Glafira Rosales.

Between 1994 and 2008, Glafira Rosales, with the help of accomplices, conducted an extensive forgery ring through Knoedler for a combined amount of more than $80 million. The master forger himself, Pei-Shen Qian, a 77-year old Chinese immigrant living in Queens, was often paid just a few hundred pounds for his forgeries. The forgers subjected the counterfeits to various processes such as “heating" and "cooling them” to make them appear older than they actually were. Tea was even used to stain the canvases. 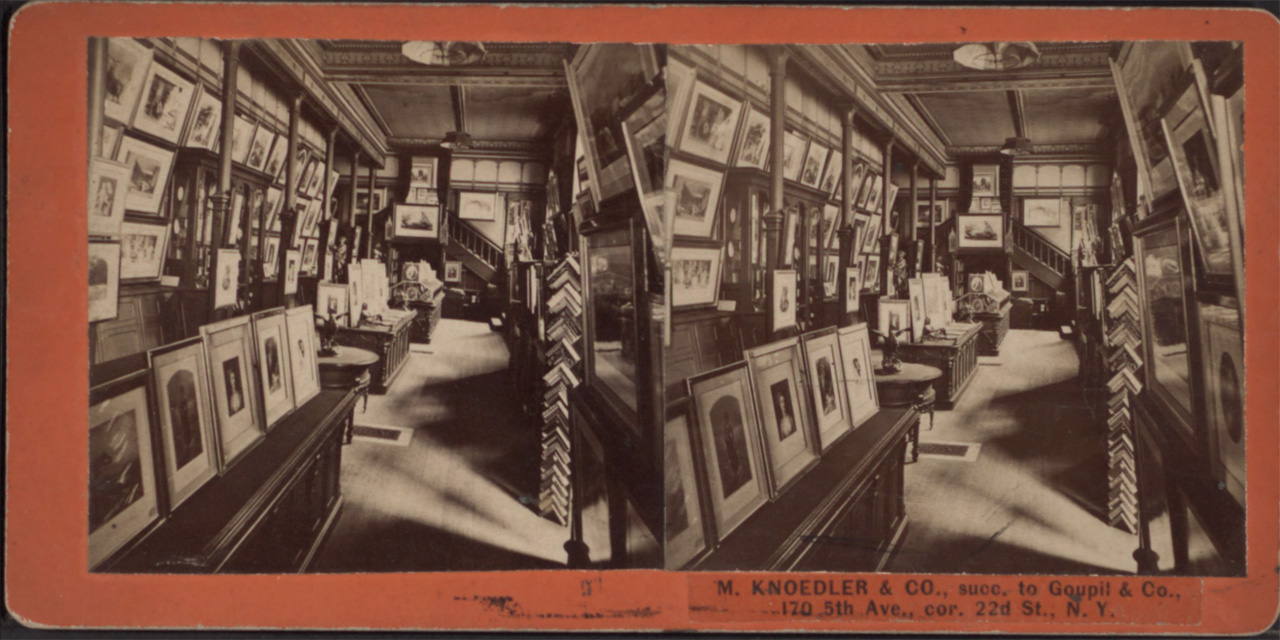 Many have wondered how it was possible that Freedman, with all her art world experience and connections, could come to trust Rosales’ story? Each of the 40 works she bought with her, including works allegedly by Willem de Kooning, Robert Motherwell, Mark Rothko and Jackson Pollock, arrived without any documentation. There were no photographs, sales records, or catalogue raisonnés to prove their existence. Freedman now claims that she is the “central victim” in this whole affair. But questions remain over her alleged involvement in the fabrication of various background stories that added credence to the fake collection.

According to Rosales, the art works came from the son of a Mexican collector who preferred to remain anonymous. It was alleged that this collector, the so-called Mr. X, had bought the works straight from the studios of the Abstract Expressionists. Staff at Knoedler would refer to him as the “Secret Santa”. Throughout the various transactions, Freedman, it was alleged, never mentioned the existence of Rosales and thus gave the impression that she was dealing with the son of Mr. X directly. She allegedly even propagated a story involving a gay love affair between Mr. X and a well known figure connected to the artists. This was all patently untrue.

Each work was offered at a cut down price and Knoedler made enormous profits reselling them – one Rothko was sold at a 773 per cent mark up. Freedman herself made around $10 million in commission from selling the fake works, that was on top of her $300,000 a year salary. She has always denied any knowledge of the forgeries and in a recent interview with New York Magazine defended her role in the affair by declaring: “Dealers often do not know the specifics of origin or background, or how the art left the artist’s studio.” Since leaving Knoedler she has set up FreedmanArt, a New York gallery that boasts Lee Bontecou and Frank Stella on its roster of artists. 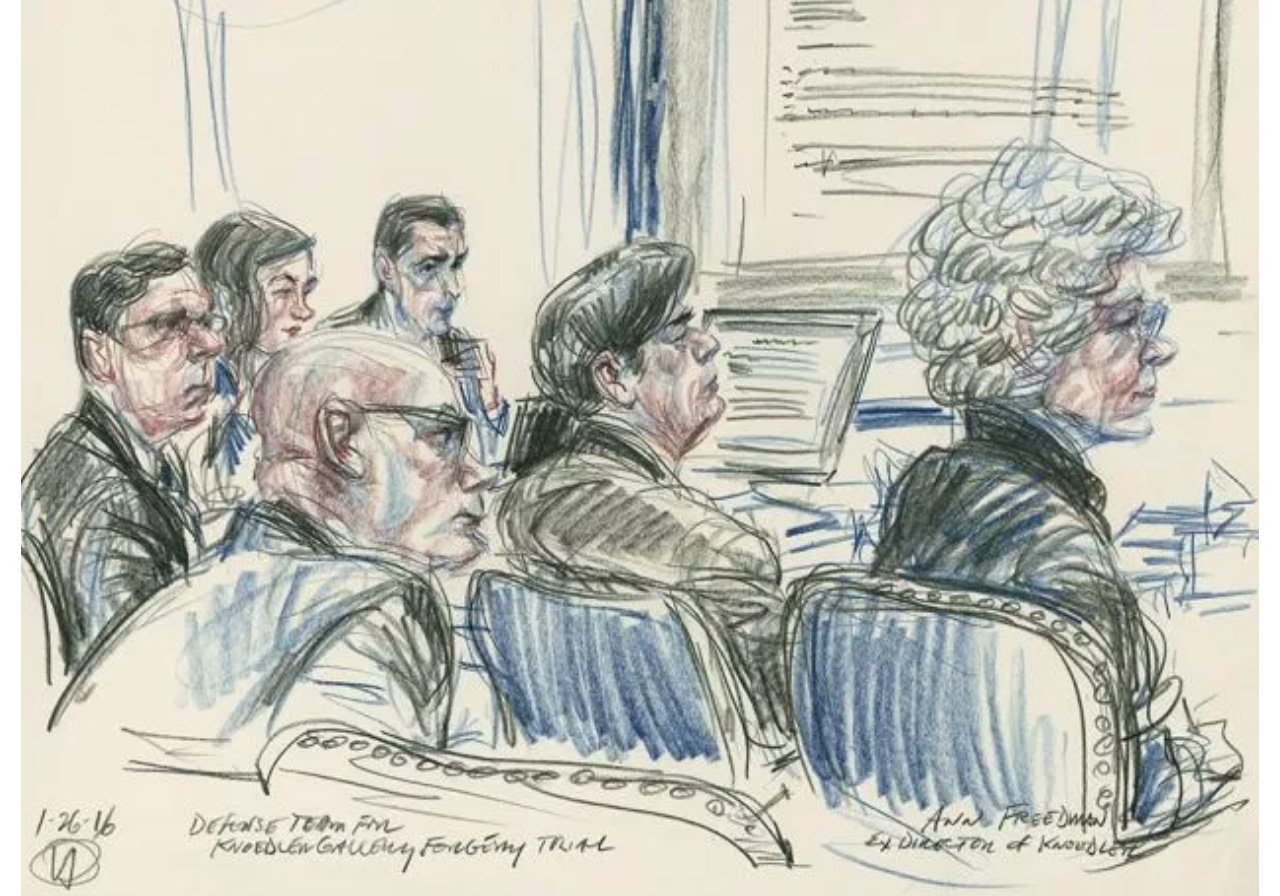 Usually a gallery would run a mile if a stranger suddenly appeared selling undocumented masterpieces at a knockdown price. And if the gallery had performed due diligence they would have perhaps discovered that pigments used in the paintings were identified in conservation laboratories to have been developed decades after the death of the artists. Perhaps most damning of all, a Pollock painting that hung in Freedman’s own apartment had a misspelt signature. The artist had apparently signed his name “Pollok”.

However, with the date of Michael Hammer’s trial soon to be set, this story seems far from over. Freedman will no doubt find herself back in the news and possibly even forced to give evidence. Despite the focus on Knoedler and the circumstances surrounding the trial, this saga has put the entire practices of the art world on trial. Shedding light on the backroom deals and exposing its antiquated selling process to an astonished public. Art remains the world’s largest unregulated market and its lack of transparency has fallen increasingly out of step with modern business practice.

The De Soles never doubted Knoedler or questioned its artworks because, as Domenico said during the trial, “it was the most trusted, oldest, most important gallery.” That blind faith has suffered a serious set back. And one thing is for sure, collectors purchasing high end art in the plush surrounds of upmarket galleries will never again take a gallery’s reputation as insurance alone.