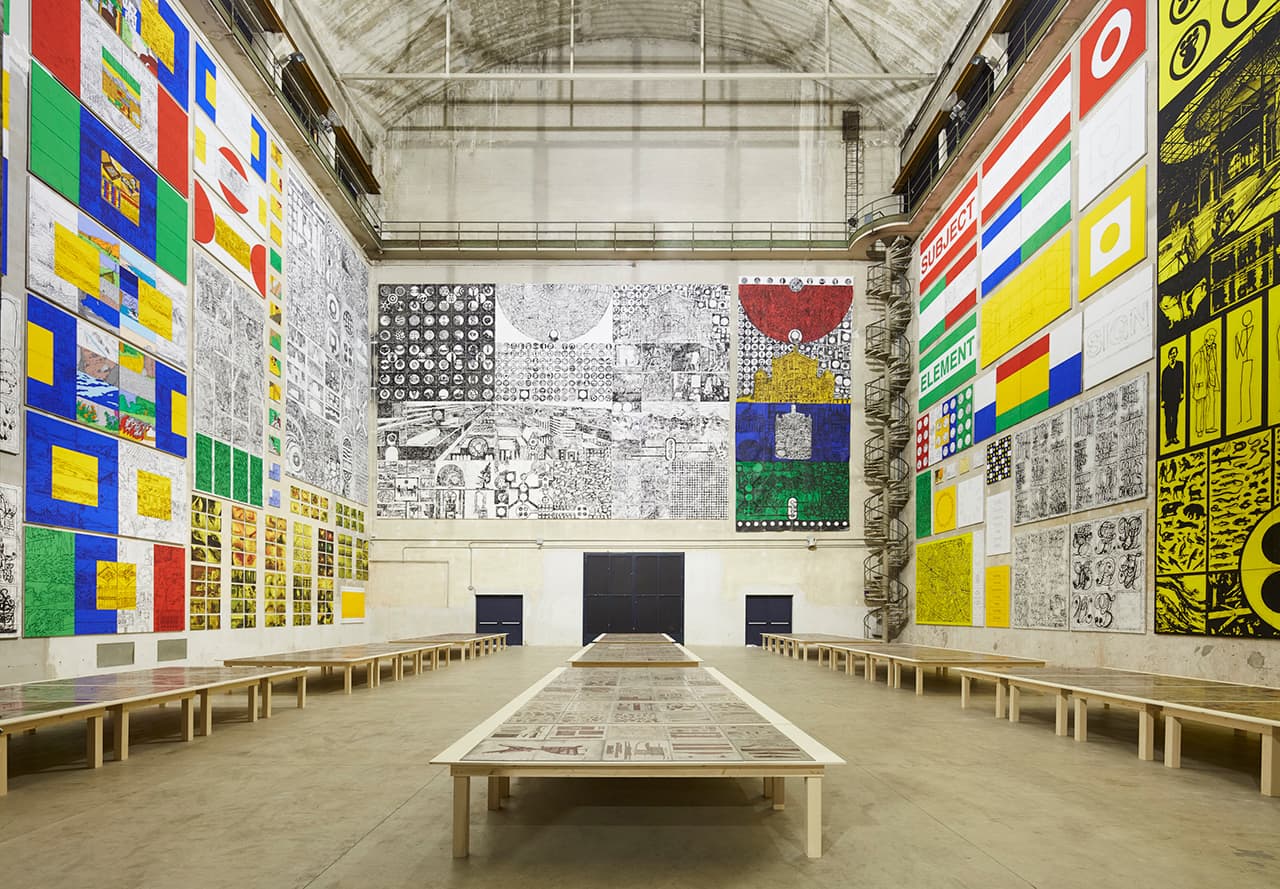 Throughout his 40-year career, American artist Matt Mullican has been blurring boundaries. He has worked outside traditional paradigms, breaking down the walls between drawing and performance, the physical and the subconscious. He has set himself a mission—to explain the human condition and to cultivate a radical approach to help him do so.

Pioneering the artistic use of hypnosis, Mullican performs in an entranced state to publicly present the deeper levels of his mind and work outside of himself, inviting others to watch. Based on this use of hypnosis and born from a continuous desire to comprehend and structure the world around him, the artist has also constructed a complex system that examines the reality of things, which he terms the “theory of the five worlds.” His work, as such, is both a stimulating exploration of the nature of our world, and an equally captivating journey through the artist’s own subconscious.

Mullican has been experimenting with hypnosis since the 1970s, connecting to his subconscious in a way reminiscent of the Surrealists and their “automatic” works. After being induced into a hypnotic state, he performs in front of an audience, drawing or writing words or patterns with black ink on large canvases in a trance-like manner. He is seemingly disconnected from those around him, but in tune with some deeper part of his mind—he refers to the alter ego that takes over his movements as that person, a nondescript, genderless being, distanced from him as artist. The performances are fascinating, yet often disturbing and uncomfortable (view an example from the TateShots series). 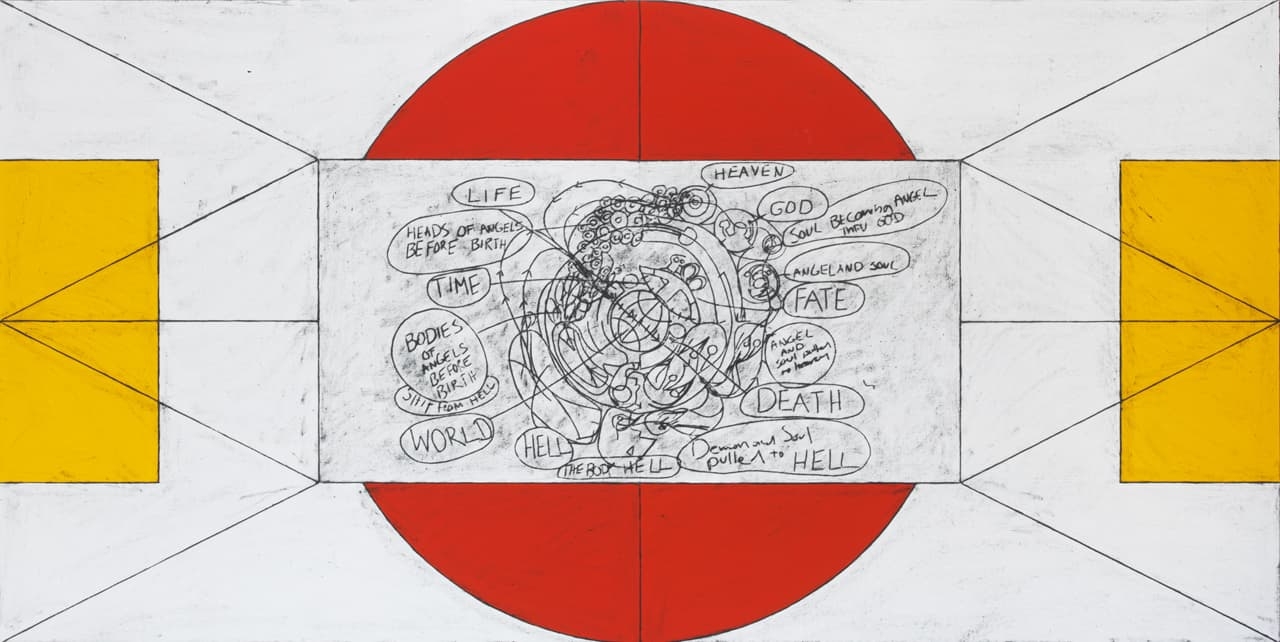 In direct conjunction with Mullican’s experimentations with hypnosis is his fascination with mapping and depicting the underlying order of the universe. His “theory of the five worlds”, which has remained at the center of his work since the 1980s, is a visual language of his own creation that uses color to represent the layers of human experience and perception. According to Mullican’s system, green is that which is physical and material; blue represents everyday life (the “world unframed”); yellow denotes objects that have acquired value, as in art (the “world framed”); black and white stands for language and symbols; and red for subjectivity and ideas. This model permeates most of his work and is used in a diverse range of media that includes drawings, photographs, photo assemblages, flags, sculptures, video, prints and installations. 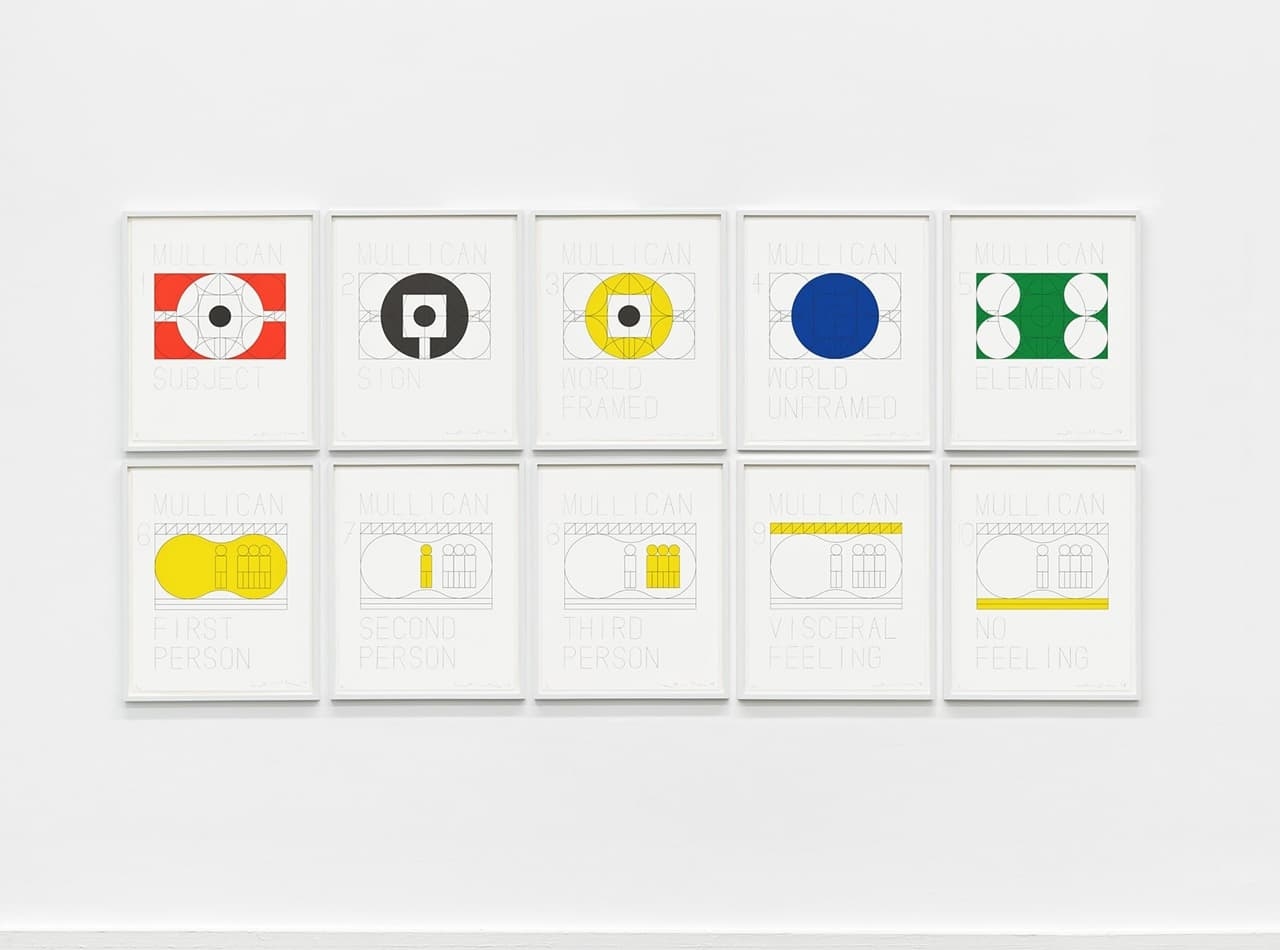 In Subjects, his latest series, Mullican depicts these five worlds through their corresponding colors and simple geometric patterns. Through an encyclopedic approach the artist reduces the intricate web of human experience to a simple geometric language, giving the world an iconographic structure. Our possessions, our words, our thoughts and our feelings are all collapsed and symbolized, the whole of the human condition presented as if for an alien who wants to understand how we live on earth. 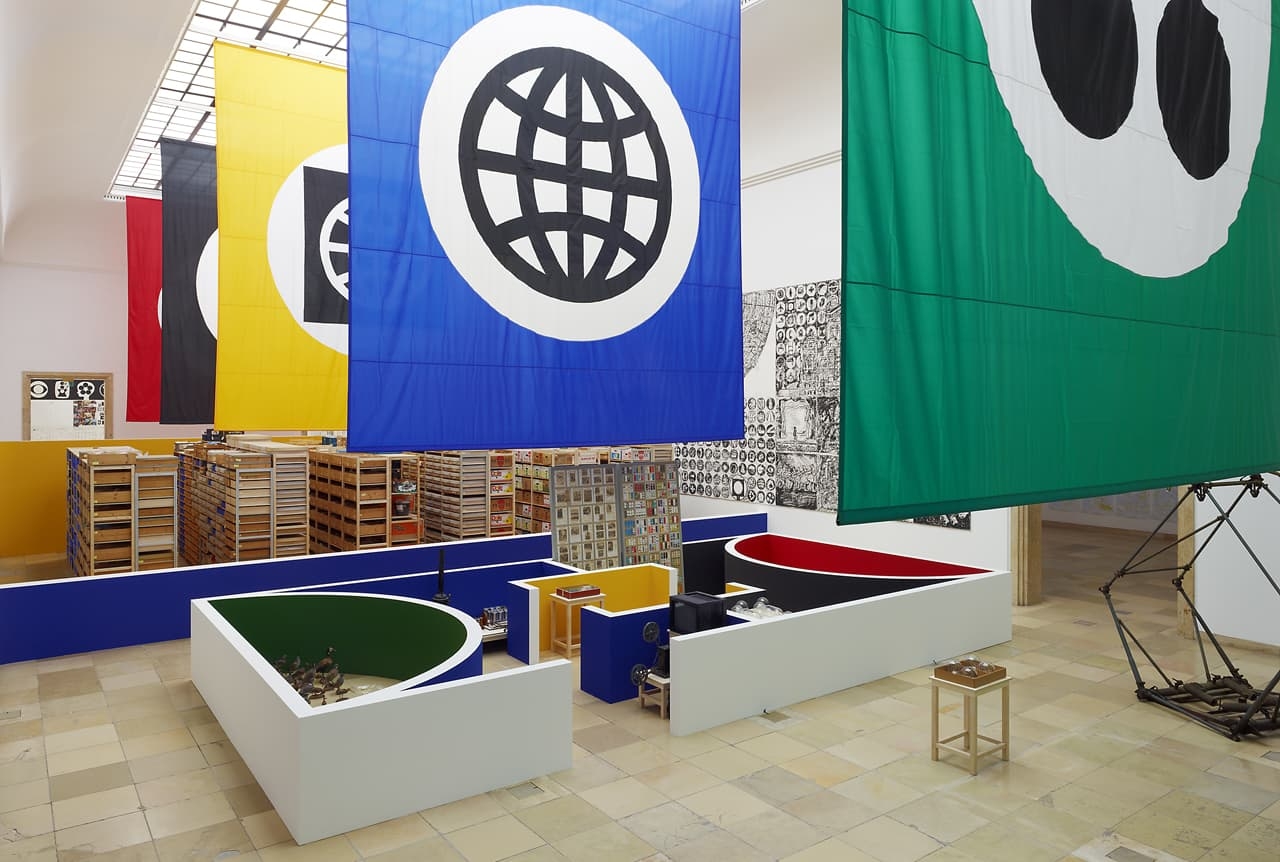 The child of Luchita Hurtado, a Venezuelan surrealist painter and American artist Lee Mullican, Matt Mullican was born in Santa Monica but spent his childhood moving between Venezuela, New York and Rome. Such cultural and linguistic upheaval undoubtedly inspired his insistent use of symbol and also can explain his nomadic artistic approach. He prefers to sidestep the traditional studio space practice, instead using his notebook as his studio and working wherever he travels.

Mullican was a student of Conceptual master John Baldessari at the Californian Institute of the Arts, but has always distanced himself from the austerity and the rigidness of the conceptual movement. Drawing from fields as diverse as psychoanalysis, surrealism and semiotics, it is easy to see how Mullican’s work and overarching cosmology ultimately departs from this movement and resists classification. He amalgamates different traditions, scientific studies, beliefs and cultures and responds to our centuries-old desire for order and meaning in the universe. The notion of the “five worlds” becomes his own almost scientific-like theory that uses visual language rather than formula to aid in the search for a reason for humanity’s existence.

“The Feeling of Things”, on display until September 16 at Pirelli HangarBicocca in Milan, is the most extensive retrospective ever staged of Mullican’s work. 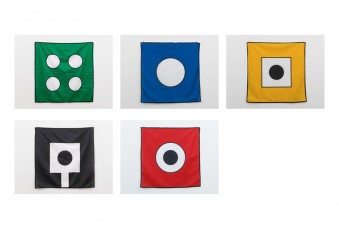 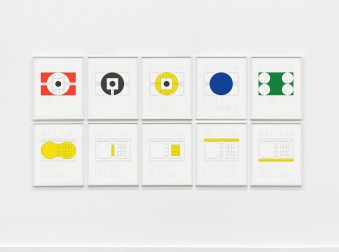