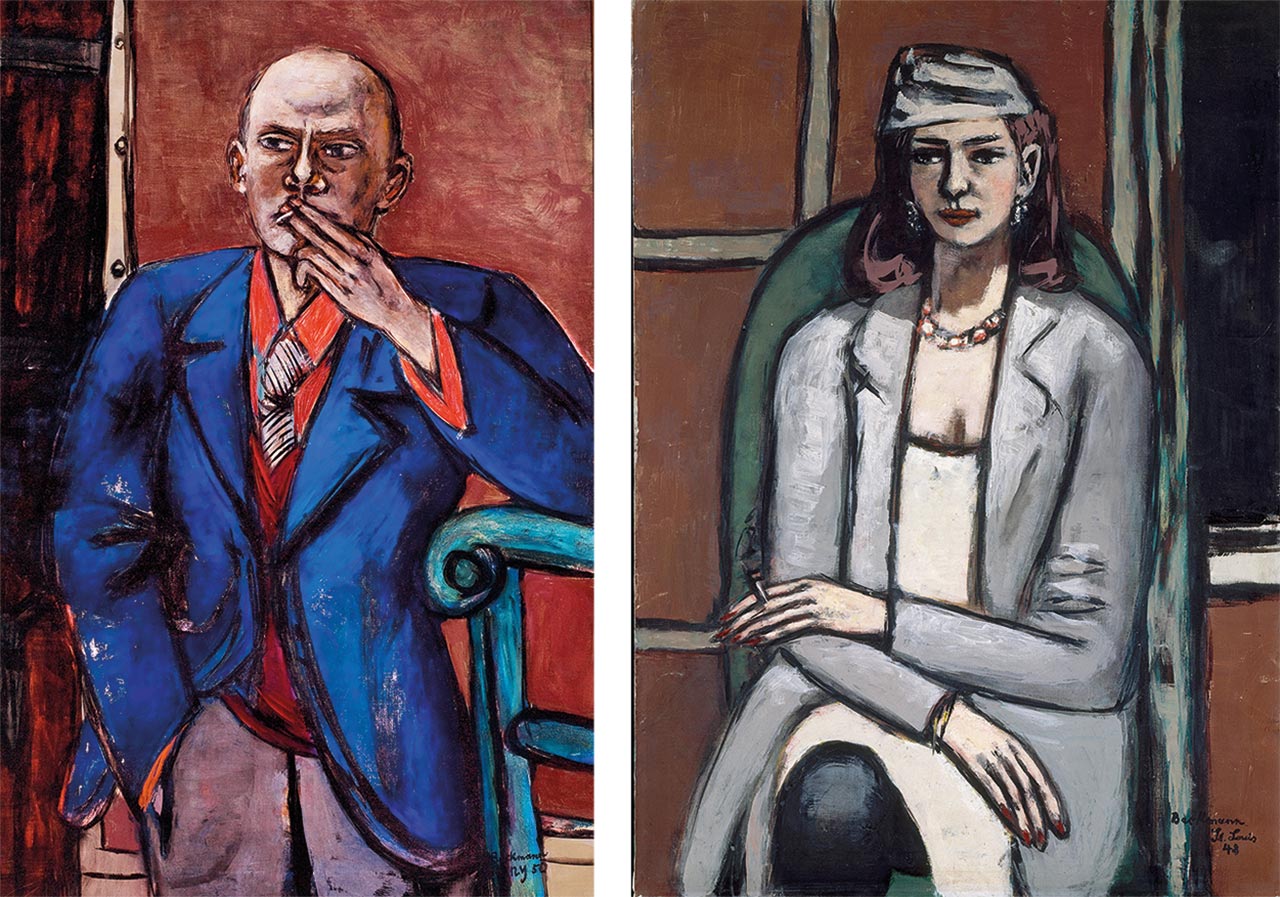 Included in the Nazi’s infamous 1937 exhibition of degenerate art—“Entartete Kunst”—were 12 paintings and 12 graphic works by the artist Max Beckmann. In the following years more than 200 of his works had been rounded up from across the country to be sold abroad for foreign exchange. Suddenly, one of Germany’s most celebrated living artists had been reduced to a low-grade trading asset. Just like many of his peers, Max Beckmann’s life and works had been brutally re-categorized. “If you ever have the chance please don’t forget to teach the Nazis that I am a German painter”, Beckman wrote to his friend, the dealer Günther Franke.

In that same year, 1937, the Nazis’s exhibition of “approved” German work opened at Munich’s Haus der Kunst with an introductory speech by Hitler himself. The speech was not just a celebration of so-called “Great German Art” but took swipes at modernist artists and their “gruesome malfunctioning of the eyes”. The day after hearing the speech on the radio Beckmann and his wife fled to Amsterdam never to return to their homeland again. Ten years later, and after years of trying, Beckmann managed to obtain a visa to America, and so began a short-lived but enormously productive period for the painter. 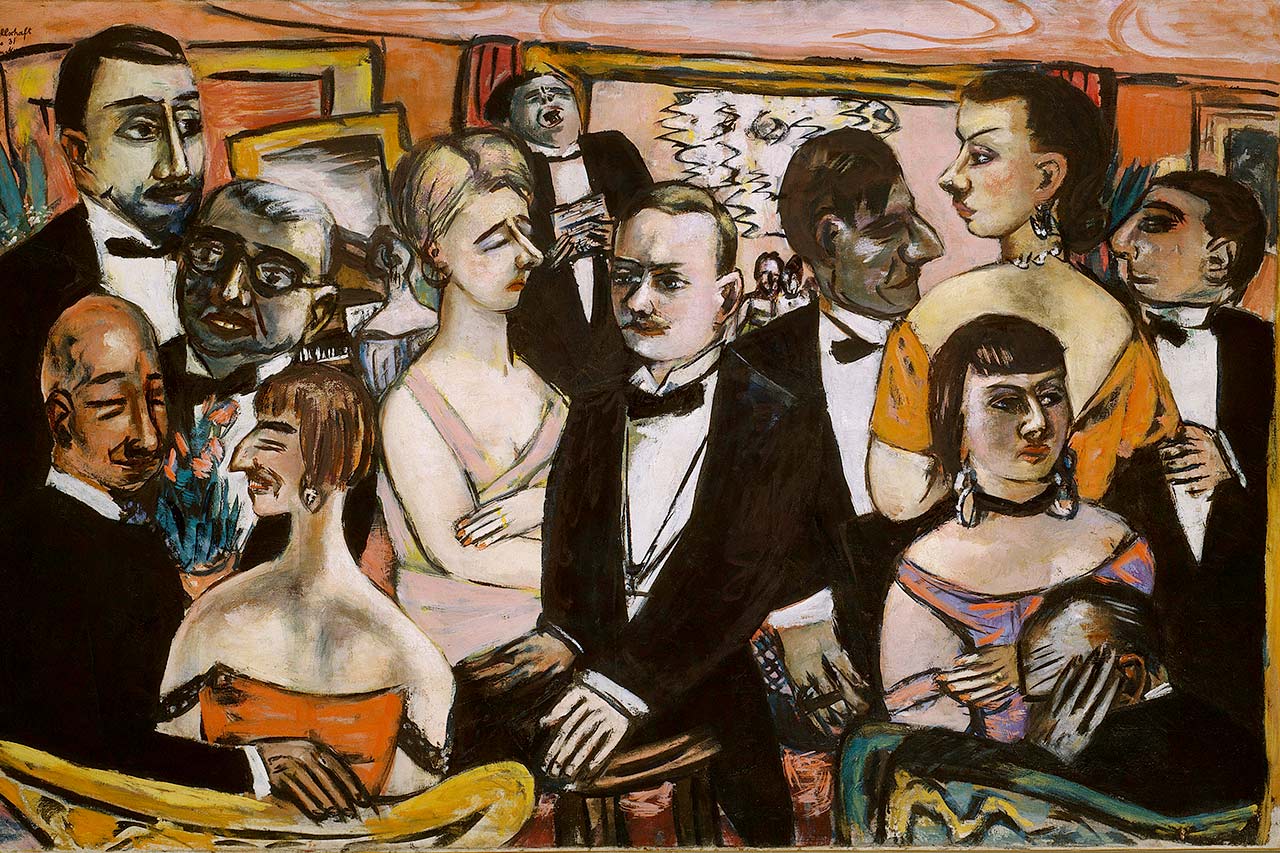 Max Beckmann’s life and works are the focus of the superb new exhibition at the Metropolitan Museum entitled “Max Beckmann in New York”, which brings together over 39 of his works made during those two years as well as works held in New York collections. The exhibition at the Met is a poignant one as Beckmann died of a heart attack near Central Park on his way to the museum to view his freshly hung new canvas Self-Portrait in Blue Jacket, 1950. It shows the artist relaxed and upright as he pulls sharply on a cigarette (his constant companion), the vibrant color typical of his time in New York. Life in Manhattan had energized the artist, New York, he once described, was “a prewar Berlin multiplied a hundredfold.”

After his death, Beckmann’s long-term wife, Quappi Beckmann, never forgave the then Director of the Metropolitan who sold off three of his works to private dealers. She made a point of leaving two of Beckmann’s finest works not to the Met but the National Gallery of Art in Washington. One of the paintings Falling Man, 1950, shows a man falling from a burning skyscraper. Wingless, unlike the birds beneath him, this modern-day Icarus could be read as a symbol of humanity’s Faustian pact with progress and ideology. 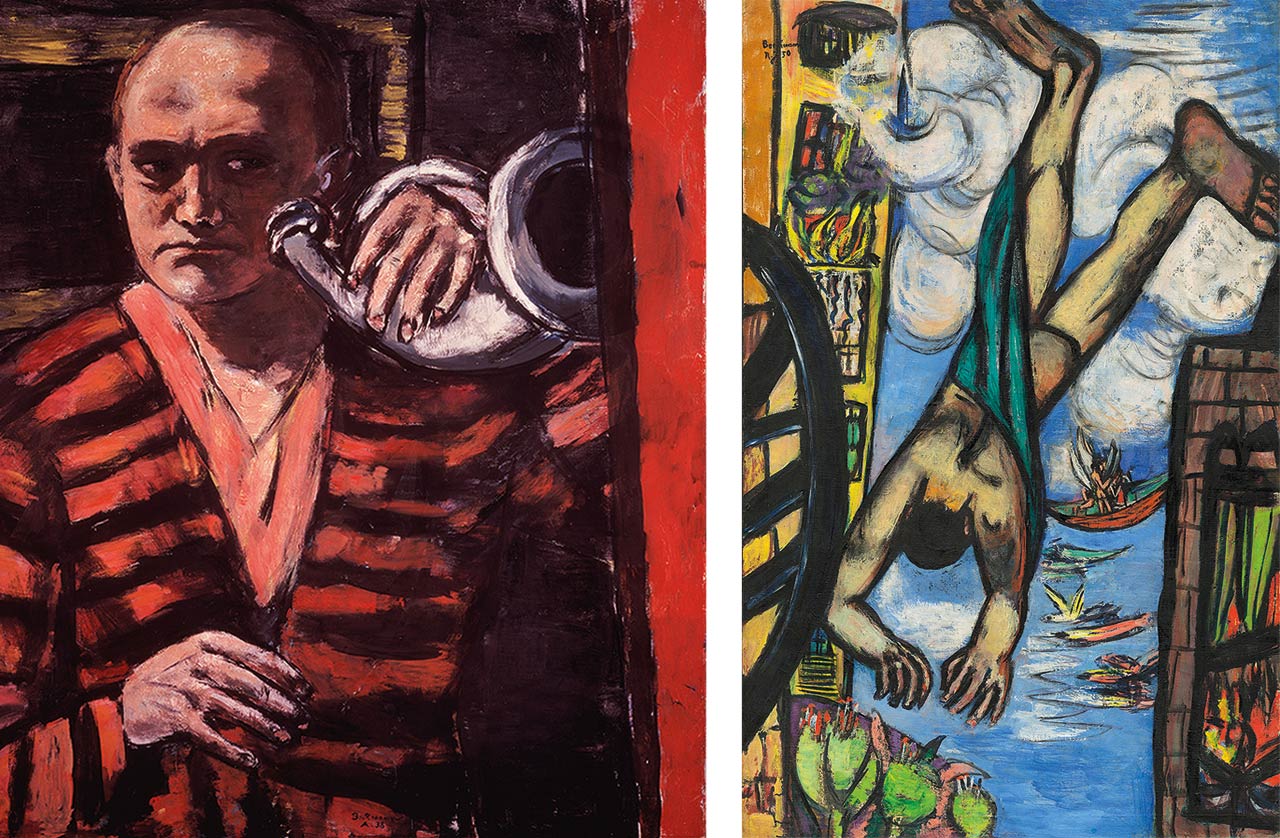 Beckmann, it must be remembered, had a front row seat to two of the most disturbing periods of world history, not just the crimes of the Nazis but also the savagery of the First World War, where he worked as a medic—suffering a nervous breakdown as a result. After his recovery he took up a prestigious teaching position in the Städel Art School in Frankfurt and painted the bourgeois excesses of Germany’s Weimar culture in a detached, unsettling style. When he was finally stripped of his position by the Nazis in 1933 he knew ultimately that his time in Germany, and the way of life that he had known, was over.

Under ever-increasing pressure from the Nazis who labelled him a “Cultural Bolshevik”, he began work on Departure, 1932, 1933-1935, one of the most visually devastating documents of the 20th century. In the style of a Renaissance altarpiece, the contrast between the central otherworldliness and the violent scenes of torture on its wings conjures up a world not just afflicted by Nazi cruelty but the madness and despair of the whole era. He, perhaps more than any other artist working at the time, foresaw the rising torrent of violence in his country. 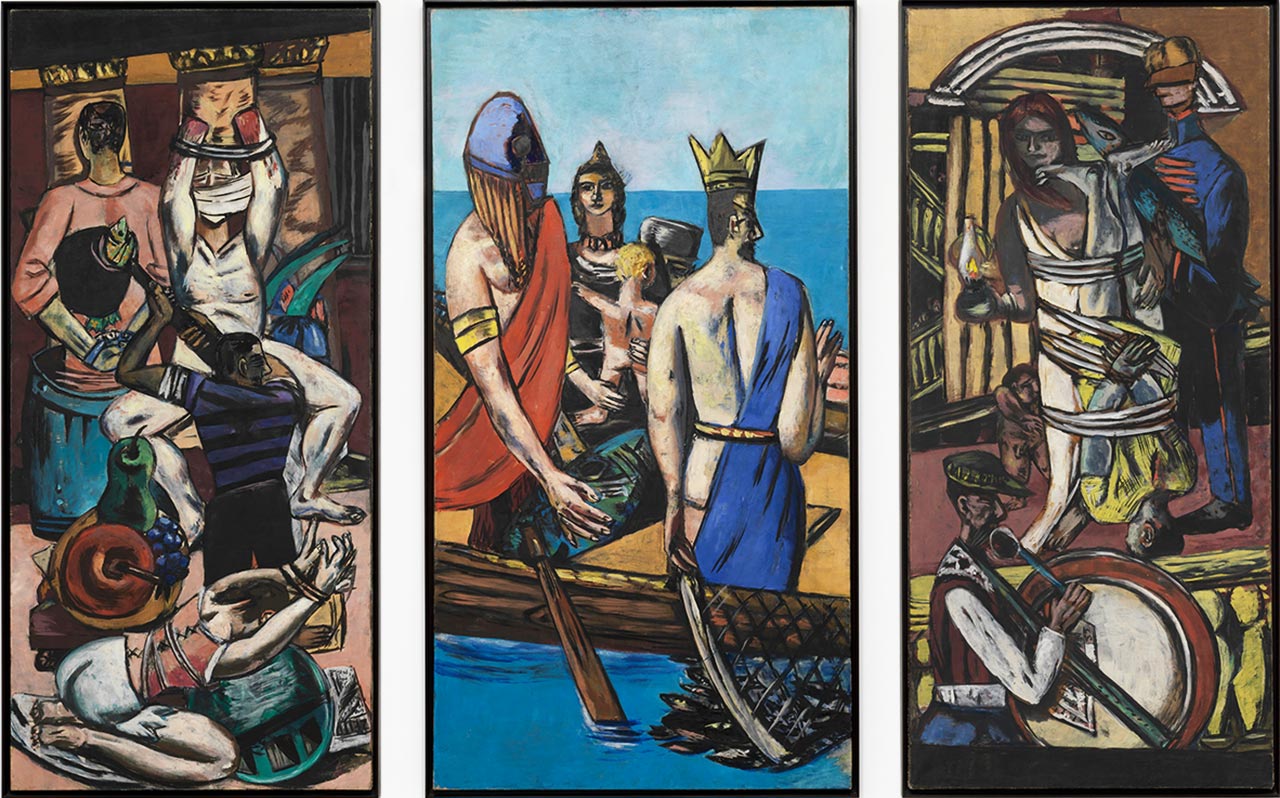 Initially Beckmann regarded his escape to Amsterdam as a temporary stopover on the way to Paris where he kept an apartment. But the war forced him to stay there for 10 years. His work Self-Portrait with a Horn, 1938, was painted not long after reaching the Dutch capital. The exiled artist appears isolated and tentative, his sidelong glance suggesting a man burdened with his own thoughts. Most strikingly, out of dark shadow encroaching onto his face, his hands, brow and eyes are vivid and intense, drawing attention to his irrepressible gifts as an artist and observer of life.

In 2011 a discovery was made by a lawyer that once again illustrated how Max Beckmann’s life and work would be forever caught up with the history of the country of his birth. A small painting—missing for over half a century—turned up at Lempertz auction house in Cologne. The Lion Tamer had been confiscated by the Nazis from the Jewish collector Alfred Flechtheim in 1934. The owner of the work was none other than 80 year-old Cornelius Gurlitt, the solitary collector whose flat was raided in 2012 with the discovery of an estimated €1 billion worth of looted art stacked on shelves beside tins of food.

His father, Hildebrand Gurlitt, had been one of only a handful of dealers permitted to trade in modernist artworks by the Nazis, and had been instrumental in liquidating Beckmann’s works despite being “quarter Jew”. He had claimed before he died that his collection had gone up in flames during the firebombing of Dresden. The lawyer who had spotted The Lion Tamer did manage to get proceeds of the €720,000 it made at auction to the descendants of Alfred Flechtheim. Yet even now the long arduous process to uncover the rightful owners to the many other paintings, etchings, and lithographs by Beckmann has begun.

Few artists’ lives have ever been so inextricably entwined with the traumas of contemporary history, but to focus in on that point alone is to miss Beckmann’s unique ability to probe the great unarticulated mysteries underlying human existence. Beckmann, plagued by insomnia throughout his life and riven by crippling anxieties, worked beyond the brutalities of World Wars to voice a larger expression—the universal themes of terror and redemption. Thankfully this stunning New York exhibition gives us a chance to appreciate this great artist where he was most celebrated and, most importantly, at peace. 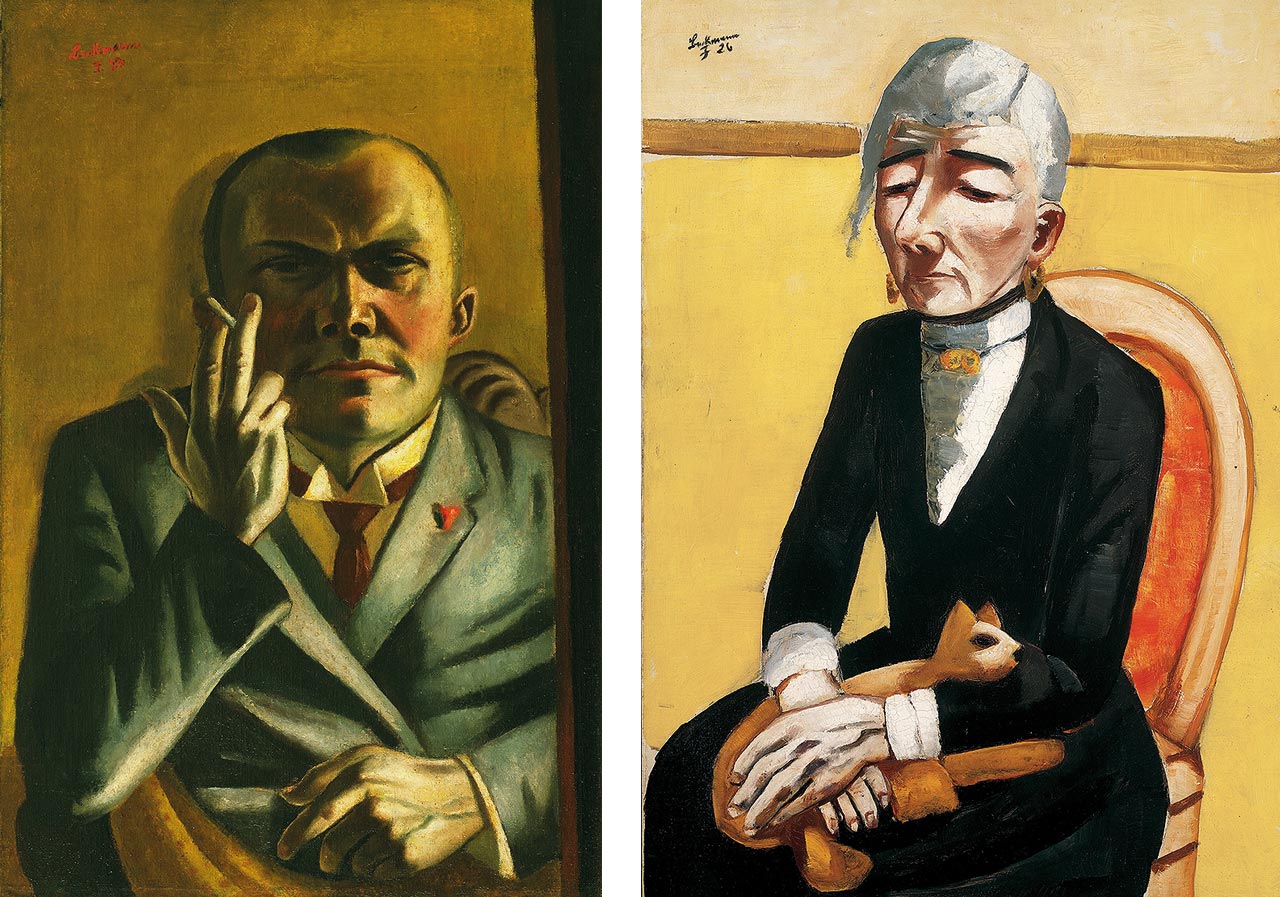