“My name is Raymond Pettibon, and I designed this motherfuckin’ thing”.

American artist Raymond Pettibon has achieved many things during his career but one of the strangest accolades has to have been designing the most prolific tattoo ever, the “four bars” logo for the band Black Flag. Signifying punk disaffection—an attitude that echoes throughout the artist’s work—the “four bars” can be found inked onto the skin of singer Bryan Adams’ and actor Edward Norton’s body. Pettibon himself was a short-lived member of Black Flag, but his skill as a draughtsman quickly marked him out as a leader of the punk-rock aesthetic as opposed to playing bass. That this unschooled punk kid making flyers and posters for L.A. bands would become a feted artist of international stature no one could have predicted. But unpredictable is what Pettibon does best; part of what makes his work so compelling is its elusiveness. 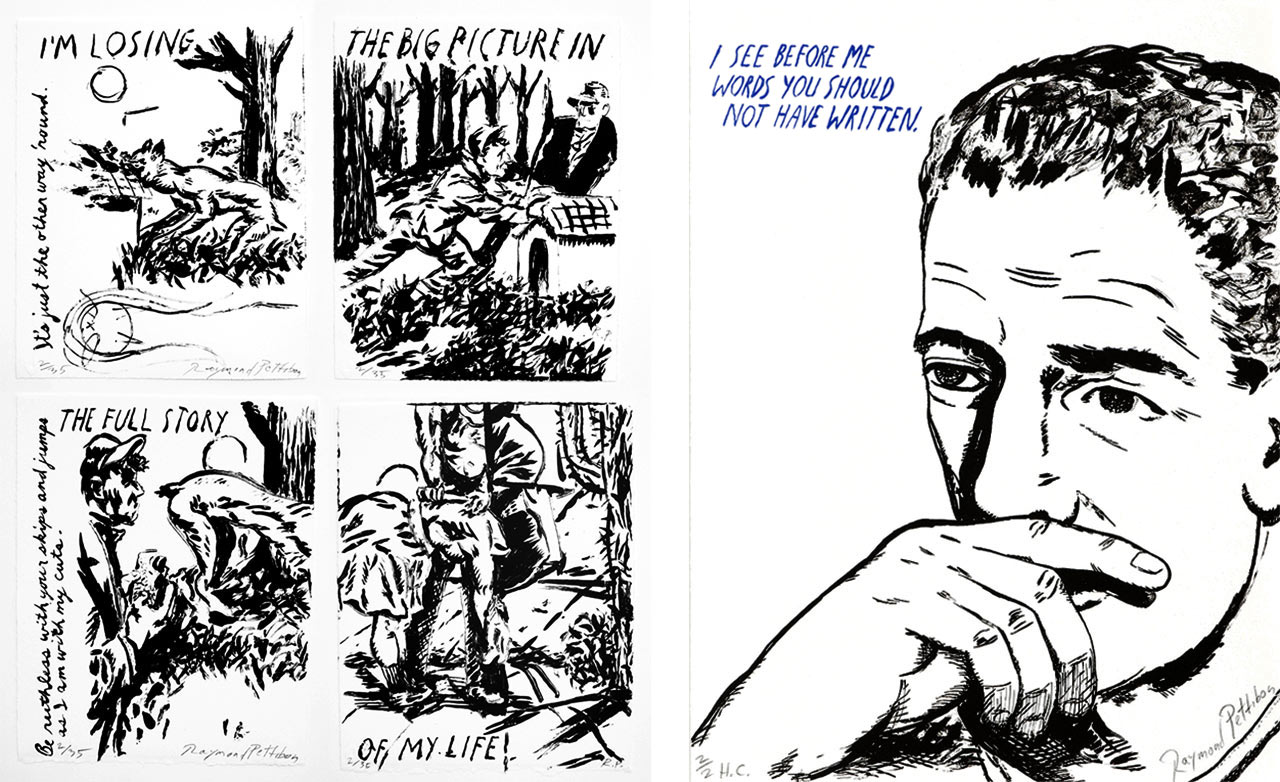 Pettibon’s disheveled combination of text and illustration—so often focused on the bloatedness of American cultural life—can be disquieting, incisive and blackly humorous all at the same time. The four lithographs in his Bucksbaum Suite are linked by the text that extends through each, “I am losing—the big picture—in the full story—of my life.” Despite their style in the form of a Boys’ Own Adventure comic, each image becomes increasingly unsettling, until finally ending with an obscure scene that appears to show a girl being molested. But it is too ambiguous to be sure—and how it refers to the text is anyone’s guess? Such work is typical of Pettibon who is a poet as much as an artist, taking words out of content and reappropriating them, often in total discord with the imagery.

Using Indian ink with the occasional splash of color, Pettibon’s work is never caricature, or overtly cartoonish. He would say himself that he “plays it straight”; he has no interest in exaggerating the subject. His work transcends such categories in the same way that his art transgresses the many conventions in the art world by avoiding all “grandiose delusions”. His subject matter of surfers, ships, locomotives, Elvis, Charles Manson and political figures are the classic narratives of American culture—narratives that he simultaneously celebrates and undermines. 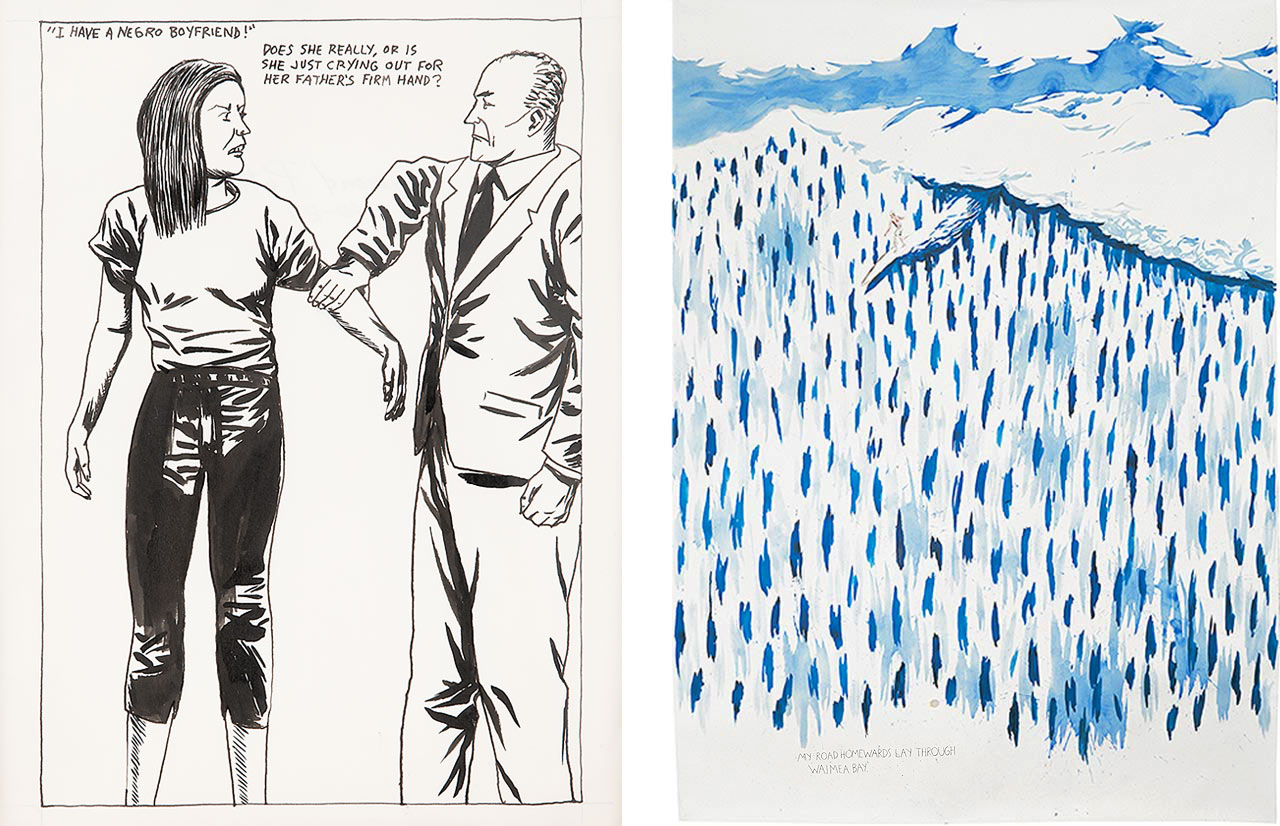 What is so intriguing about his work is his ability to merge high and low culture, to cite Goya and William Blake as influences while depicting sledging baseball players and men with enormous swinging penises. And he makes it look so easy. In No Title (My road homewards . . .), in just a few casual lines of color, combined with the quasi-profound phrase “My Road Homewards Lay Through Waimea Bay” he manages to convey a surfer’s brief moment of utter sublimity, before they plunge into the blue depths.

Starting on November the 19th a colossal Pettibon exhibition will open at the Museum der Moderne in Salzburg entitled “Homo Americanus”, bringing together over 500 works from the artist. The exhibition focuses on the changing tirades of Pettibon, whose subjects have evolved from the decay of hippie culture and his anti-establishment commentary of the early 1980s, to his more literary and poetic later work and the bitter attacks against American foreign policy. Now of course Raymond Pettibons’s American art is in high demand, and on receiving the Bucksbaum Award from the Whitney Museum the trustees wrote that his work is remarkable because he “manages to engage in an immediate dialogue with the culture, to express the moment we are living in.” Pettibon may have an anarchic, anti-establishment streak running through his work, but he’s far from anti-intellectual. 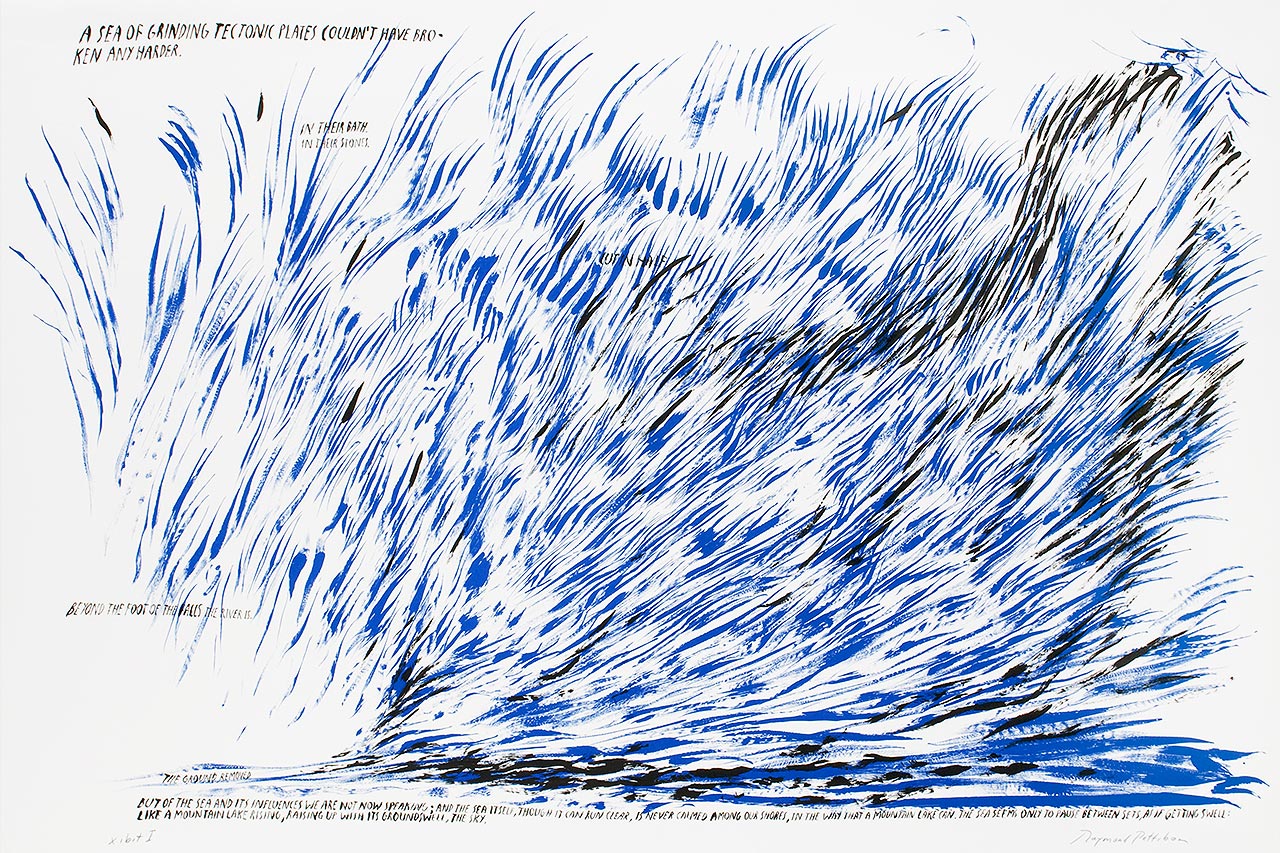 Raymond Pettibon’s “Homo Americanus” can be viewed at the Museum der Moderne in Salzburg from the 19th of November 2016 through to the 2nd of February 2017. 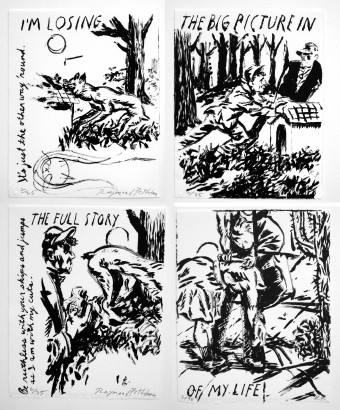 Raymond Pettibon
Bucksbaum Suite: I am losing - the big picture - in the full story - of my life, 2010