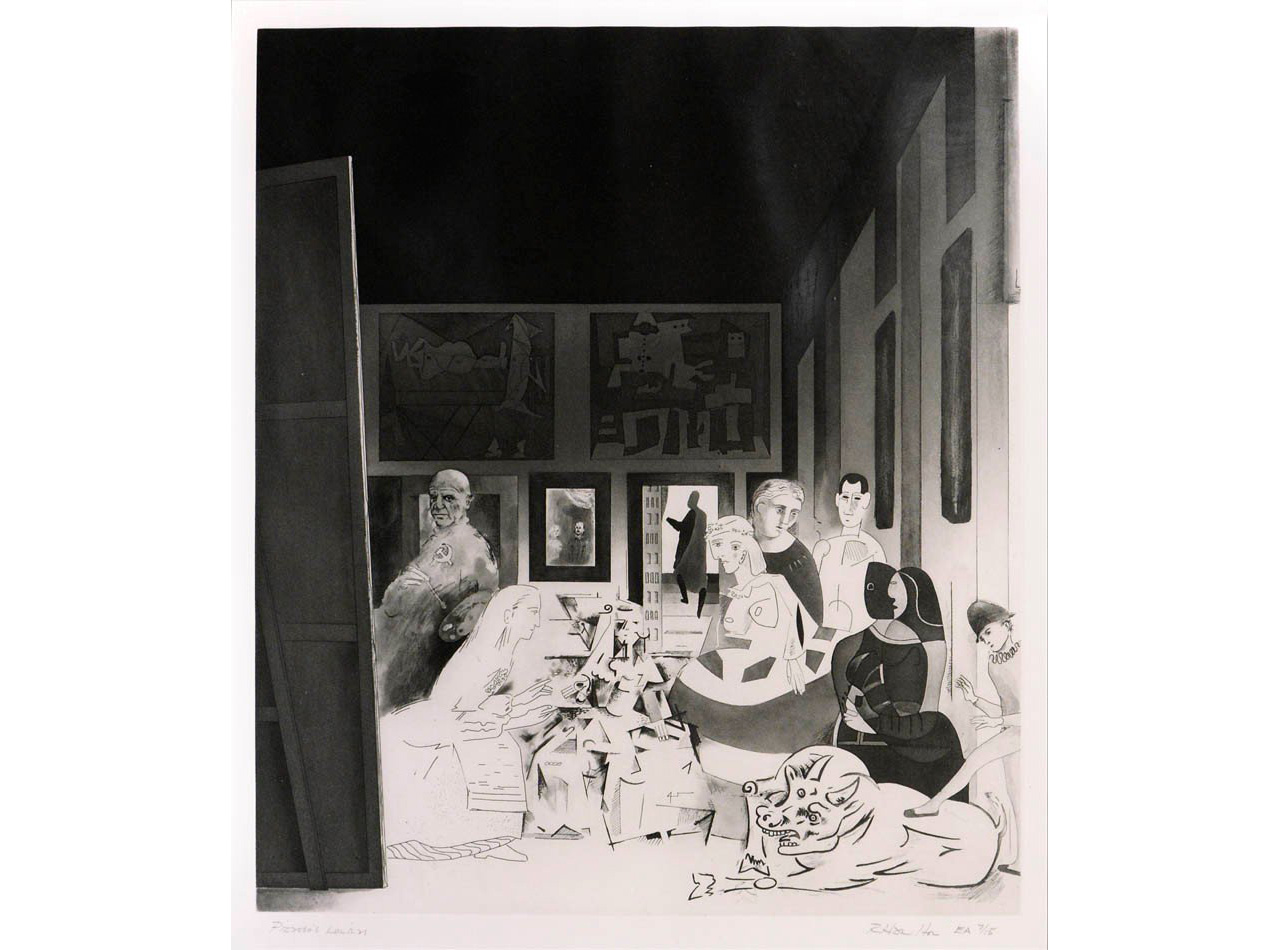 What was the inspiration?

In 1971, Hamilton was invited to contribute to a portfolio of print works entitled Hommage à Pablo Picasso in celebration of Picasso’s 90th Birthday. After seeing Velázquez’s Meninas at the Prado for the first time in 1972, Hamilton commented that “The temptation to paraphrase Velázquez in Picasso’s styles proved irresistible“.

In Velázquez’s painting, Princess Margaret Theresa and her meninas—ladies in waiting—are placed at the heart of the composition, with Velázquez himself, palette in hand, working away beside them on a monumental canvas of the King and Queen (seen only in the mirror). In Hamilton’s adaptation, the distinctive composition remains the same, but Velázquez is replaced by Picasso, identifiable as much by his carefully etched likeness as by the hammer and sickle, emblem of the Spanish communist party, imprinted on his chest.

Why is the composition of Velázquez’s Las Meninas so famous?

Velázquez’s enigmatic composition was groundbreaking: The mirror behind the young princess reflecting the King and Queen of Spain creates the illusion that they are standing precisely where the viewer is: we are transformed into the rulers of Spain, experiencing private royal life as they would have. The intimate scene gave a ‘snapshot’ of the court as never seen before, challenging the conventions of royal portraiture while simultaneously toying with notions of composition and identity to blur reality and shift perceptions.

What did Picasso think of Las Meninas?

Picasso was so captivated by Velázquez’s painting that he spent half a year in 1957 creating a suite of 59 paintings by the same name, analyzing and re-interpreting the great work.

Why is each figure in Hamilton’s interpretation drawn in a different style?

Hamilton saw the opportunity to pay homage to the complex entirety of Picasso’s oeuvre: Each figure in the print reflects a distinctive period from Picasso’s career – Rose, Primitive, Analytical Cubist, Synthetic Cubist and Neo-Classical appear alongside eachother in one artwork.

What about the printing?

Hamilton’s piece is as much a testimony to the magnitude of Picasso’s printing techniques as to his rich visual periods. Picasso was passionate about the art of printmaking, and worked closely with the master printer Aldo Crommelynck to produce hundreds of etchings. When making this work, Hamilton insisted on working with Crommelynck as well, bringing the same etcher’s hand from Picasso’s printing plates to his own. It is a highly sophisticated print, with hard-, soft-ground and stipple etching, open-bite and lift-ground aquatint, engraving, drypoint and burnishing.

Where can we view the work?

This iconic print is in public collections across the globe, including the Tate, London, the British Museum, London, the MoMA, NYC, the Metropolitan Museum of Art, NYC, and the Aukland Art Gallery, New Zealand. It is also available here on fineartmultiple.