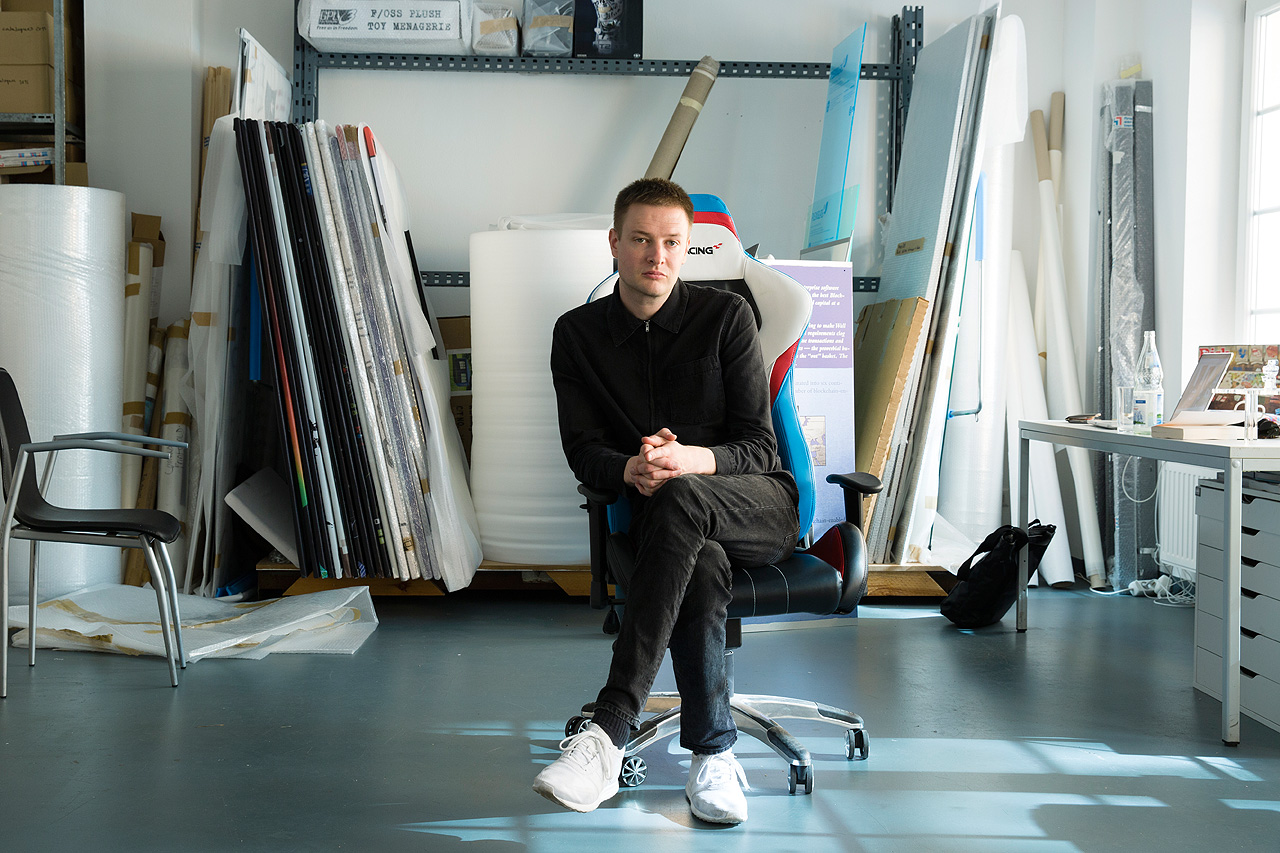 “They are in power in some way just because they invented a really clever business—this can be problematic and may be one of the most urgent issues of our time.” Simon Denny

Simon Denny’s studio is set back from a busy street, in an old furniture store still emboldened with a neon yellow sign. A modest studio for an artist who through his explorations into the figure of the entrepreneur and his adoption of the language and aesthetics of the new media economy, has become one of the standout artists working today. The clarity and impact of his momentous Venice Biennale installation, Secret Power, 2015 revealed an artist pursuing issues at the forefront of the modern age, bringing burning questions of global governance, surveillance, and power to the fore. Simon Denny is enthused and deeply knowledgeable about his subject and speaking with him is much like visiting one of his installations—it’s a struggle to keep up.

FAM: What first inspired your interest in digital technology and tech companies?
Simon Denny: I started off knowing as much as anybody, but I got more interested when I moved to Frankfurt and brought my laptop with me, and that became my most important possession. I realized I was watching TV through this thing, I was communicating with family and friends through this thing, I was learning the stuff that I was taught at art school through this thing, everything I was doing was somehow channeled through this thing (gesturing towards laptop). I thought well if I am a sculptor—someone that deals with objects—and this is the most important object in the world, then I should maybe explore what this is. Then I started making sculptures with screens, to think about the object quite poetically. That research then quickly led me to a more sociological or anthropological approach and into the people making decisions on what this thing should look like and how it should behave. 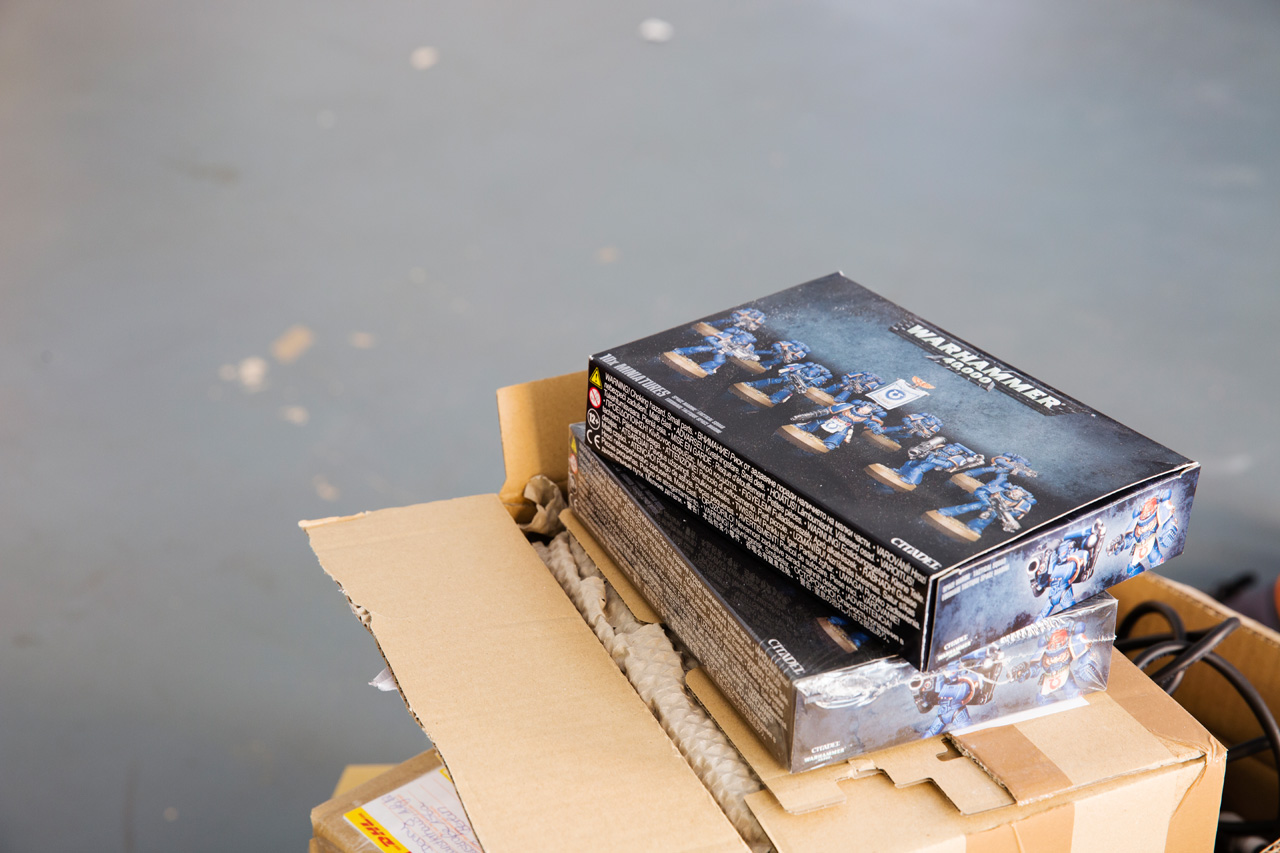 So it began with start-up figureheads?
Yes, I started wondering about the people responsible for the architecture of technology, what do they care about and what’s the most important thing for them? Peter Thiel, for example, is a highly interesting figure, but a problematic figure as well. He founded Paypal and was involved in many other great moments in tech—yet he advocated voting for Trump and financed an unusual lawsuit that ended Gawker. I realized these kinds of people are designing our future, our world. And I think at the time a lot of art that I was looking at wasn’t really registering that, when I thought it was the most important thing in the world!

Because of Peter Thiel’s efforts, the Gawker site has now filed for bankruptcy—he has effectively silenced a media outlet. A star of Silicon Valley, he believes start-ups should be “run like a cult.”
He is a very interesting guy, and I hear that he is very smart but a contrarian and a little bit nuts. I read a book called from Zero to One by him where he puts forward a contrarian argument for the importance of monopoly, and used patents as an example. It’s pretty interesting. I can relate to the appeal of a contrarian—I think challenging conventional ideas is important and fun—but of course maybe that shouldn’t be the strongest dynamic at work on one’s thinking.

Does it disturb you, the growth of these internet tech firms?
Well what we have now is a quasi-centralized network which was never what the internet was supposed to be. The idea was to have a distributed network, where each node could talk to any other node in the network—anybody on the planet could talk to each other and none was more important. Now the giant tech companies have emerged, this distributed network has really become a centralized network. The dominance of Google, Facebook and these seemingly unchallengeable companies stems from the fact that by now they have got more resources, it feels like there’s no way you can get a better search than Google, or an aggregated social news feed than Facebook. They aren’t exactly elected but are in power in some way just because they invented a really clever business—this can be problematic and may be one of the most urgent issues of our time.

Is it true that no one has authority over them?
In terms of how they structure the importance of certain things over others, no there is no legislation or state intervention that can really influence this. I mean they’re headquartered within US jurisdiction, so they’re subject to US law and this is part of the whole thing that makes the situation so complicated—the companies’ relationships to the sovereignty zones in which they exist. Particularly financially. For many decades now we’ve had multi-national companies and offshore tax regimes. The zones of exception like the free trade zones, are increasingly becoming the places where business is done. But an idealistic answer to that could be to reinstate a more distributed internet again that can disrupt this kind of centralization, which is what some companies like Ethereum are attempting by using blockchain. 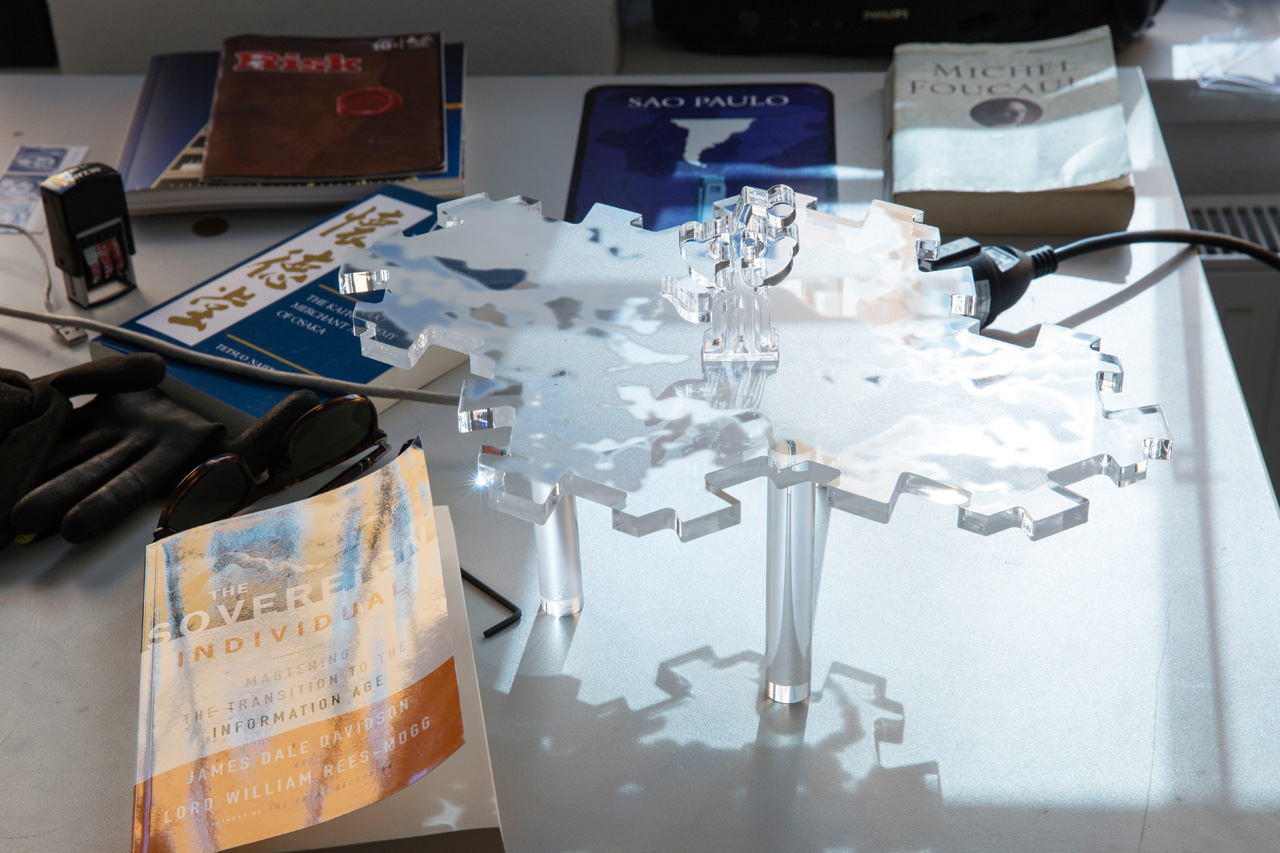 In your work Blockchain Visionaries, blockchain (the decentralized transaction database for the cryptocurrencies such as bitcoin) are represented by some of its most high-profile CEOs in a trade fair setting. Ethereum, co-founded by Vitalik Buterin is one such finance tech firm you focused on.
Many of the people who are dreaming the biggest dreams—imagining a kind of post-state, post-national system—are also forming the next stage of hyper-capitalism or whatever blockchain enables, that was a theme in the piece.

You wrote to me that you felt the work had a lot more poignancy after Brexit, I wanted to go into that a bit.
I think for me Brexit was the moment where I was strongly reminded that although I and my peers have benefitted from globalism many people have not. It was also a reminder of just how bubble-like Facebook news feed has made news consumption. One thinks one is getting a number of voices, but it’s actually a kind of concentration of affirming voices that follow one’s social groups’ existing opinions and worldview. I think a lot of people I know were surprised that there were so many people who thought that leaving the EU was a good idea. The Leave voices—underpinned by a sentiment of a sort of retreat to nationalism—seem to have a quite idealistic vision of a pre-global world that doesn’t really exist in my eye. Blockchain, instead of reinvesting in an idea of nationalism, provides a possible answer to the inequalities of the global, financialized/governmental system that we have now. Blockchain can be a kind of technologist’s dream of a more fairly distributed future. 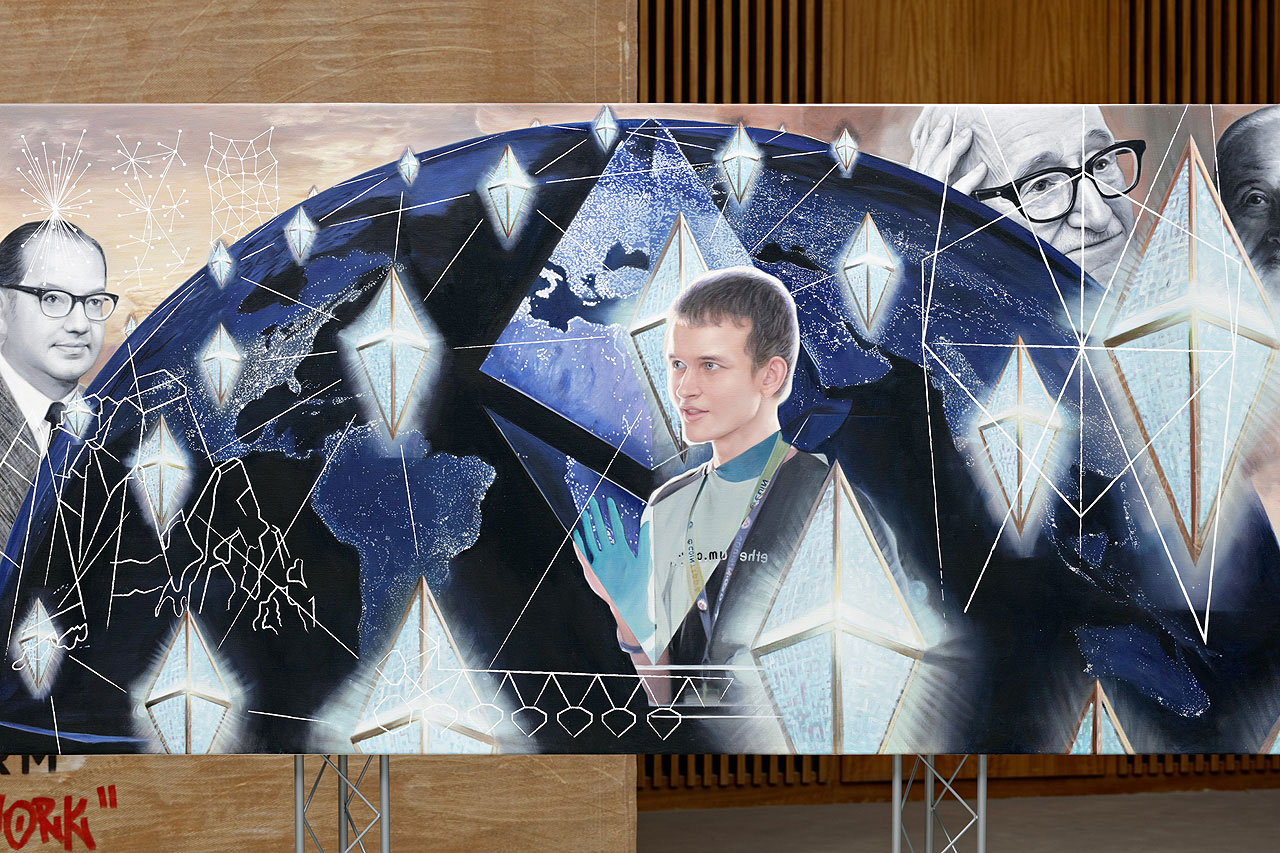 Blockchain should be seen as something positive?
Brexit was regressive—so I would like to think there is a way to have an inclusive fair globalism, that’s something that I would want to live in. I think that blockchain offers that opportunity—rather than turning to some retro mid-century idea of what a state system can be, or a Trump notion like build a wall. All of these answers are not particularly constructive and I don’t think either of them are implementable, unfortunately.

Would you say that you have an ambivalent reaction to the expansion of these tech start-ups, admiring but wary at the same time?
Some parts of the Tech community advocate moving their tech ventures beyond nationalist boarders, scale them to a mass market and be the first to build a self-sufficient society run entirely on tech—this can seem like a pretty extreme proposition. But I’m also an admirer of the people who have built this kind of technology, and these people that have built these companies, the founders have become cultural icons—these are publicly revered figures and I think that is also deserved in some ways. 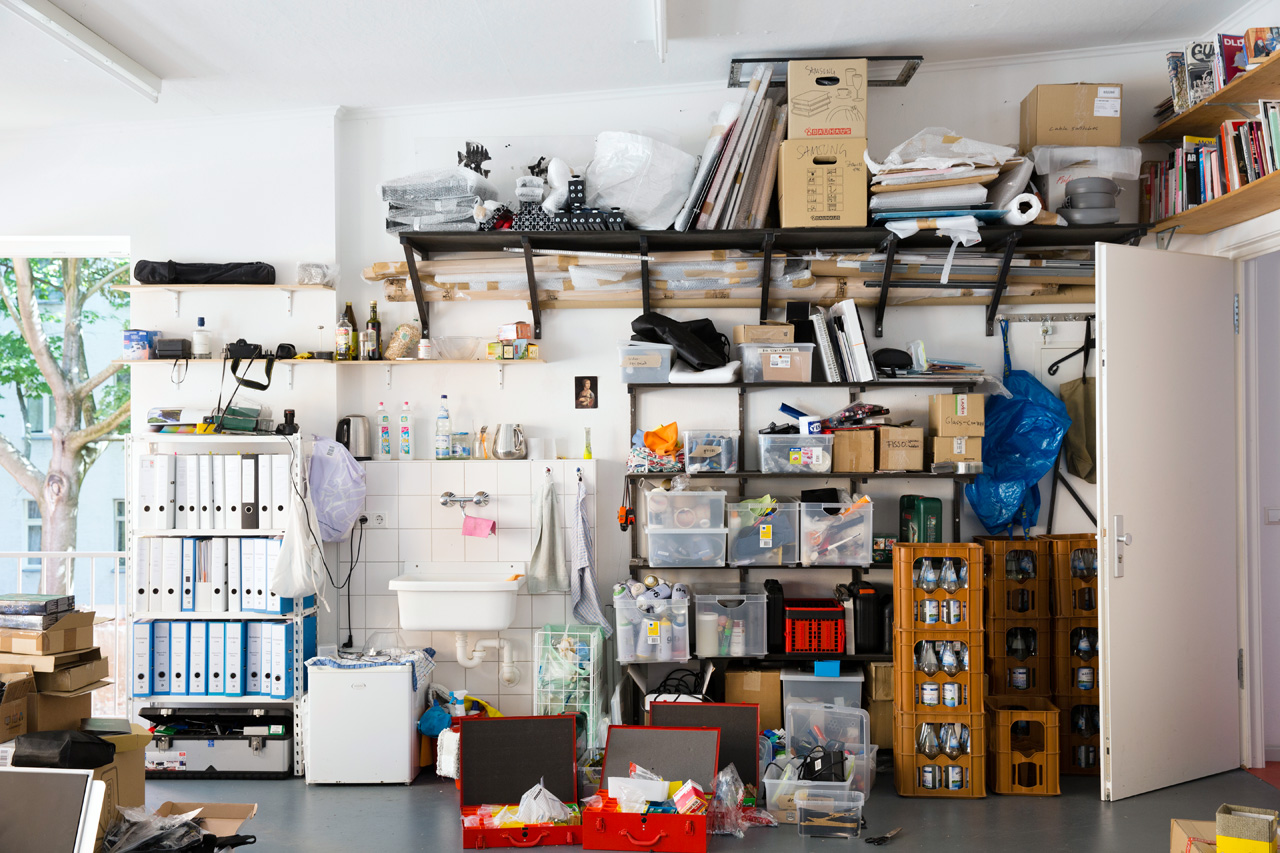 So you see your work as bringing these issues to the fore?
I hope so. People who look at art are quite a privileged group of people but art is becoming more popular and I also think that art can be this great platform that people come to for contemplation and to think about the world.

Your work can be challenging and quite dense, do you worry about leaving your audience behind?
I hope that an exhibition can give people a great consumption experience, that a wide range of people can walk in and get something special out of it. But I also want to reward the people that like to take time, to delve deep, because that’s what I want in a show. So I include levels of detail that caters to people who want a detailed experience from an exhibition. 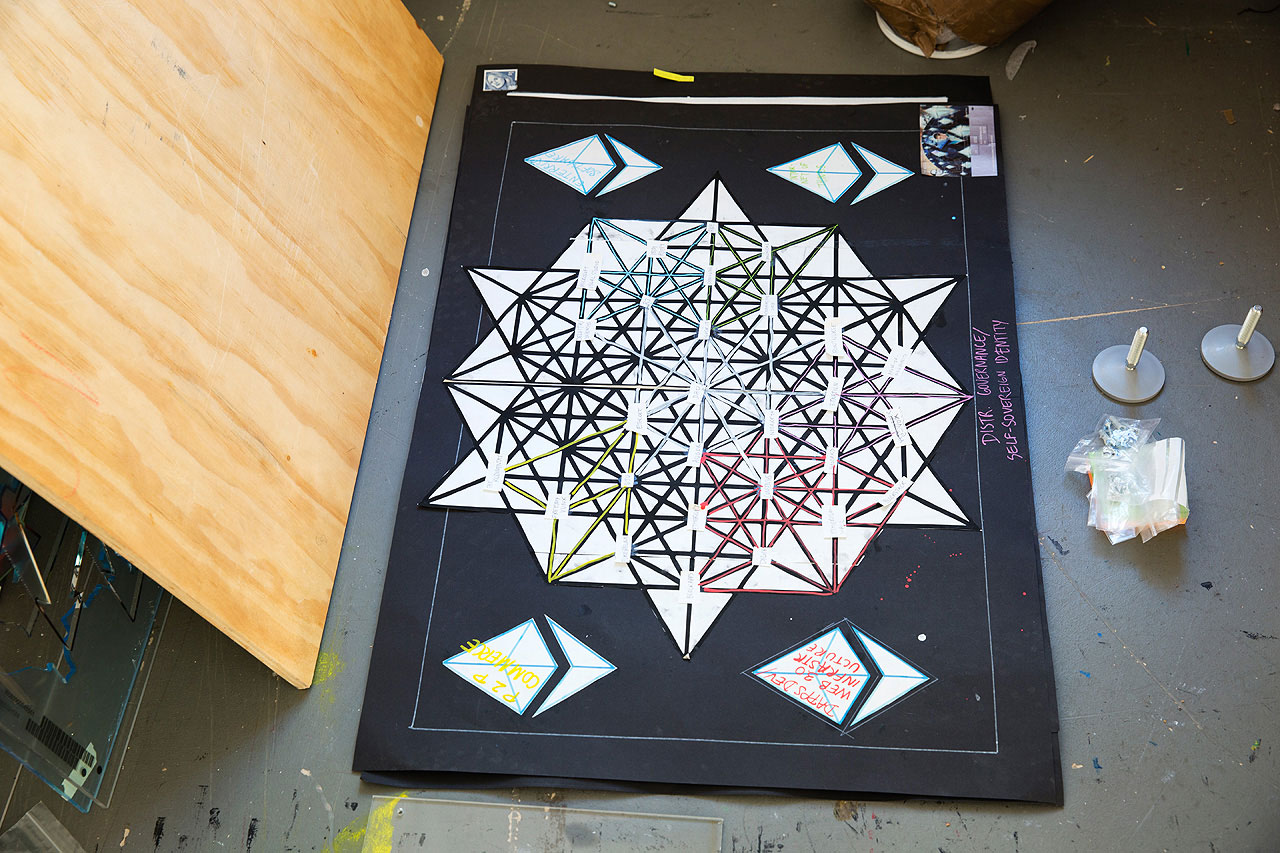 You went to Städelschule in Frankfurt, how would you describe your time there?
It was the first time I met artists who were into tech. When I went to Frankfurt I met lots of interesting people—including a few that were very different to the other people there. These guys Nik Kosmas and Daniel Keller from the group AIDS-3D, were from Chicago and they only spent a small amount of time there (unlike me) because their interests were so far from other students there at the time. I learned all these great things about the recent history of art at Städel but then these guys came along and they weren’t even really that interested in reading ArtForum, they were reading stuff like New Scientist and financial blogs. Dan was even trading stocks. So after my time in Frankfurt I took both my love for the art canon, and my love for what these guys were into—who were in my eyes at the beginning of something really fresh—and I followed both paths.

Have you been surprised how quickly attention has been brought to your work?
In some ways yes, the work I make is not always super easy. It’s not dealing with the simplest material sometimes. I have my own heroes and I have my own ideas of what’s important in contemporary art. Mike Kelley was always a big hero, and I appreciated his dense, charged works that looked at many styles of production, and utilized lots of different voices and traditions from multiple places—so the things in art I value have a lot of complexity. There have been many opportunities for me in the world and so I hope interest remains, but you never know how long these things last, it’s a risky business.

Do you still have time to be involved in overseeing all the small details of your output?
Things have changed a lot. I used to actually physically make everything at the beginning mainly because I was broke—you’ve got to have capital to produce sculpture, and if one doesn’t have money then self-made seems like the only option.

I hear you are a very hard worker, often leaving the studio at 12 at night. Yeah! But I like it, I like being around other people, this is what I want to get done, the studio is like paradise! And you know all the people I’ve met in my life, some of the most meaningful people are those I’ve met through my work or through art in general. 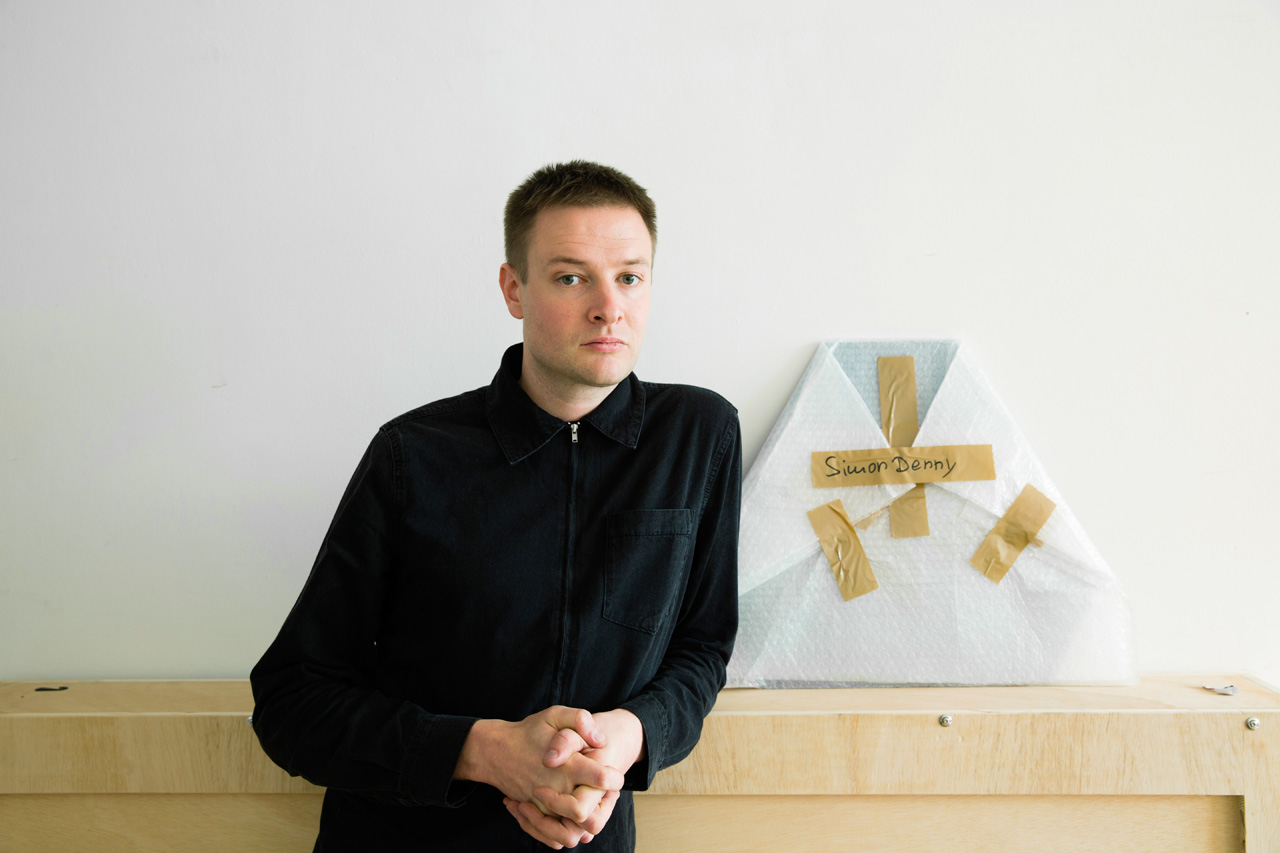 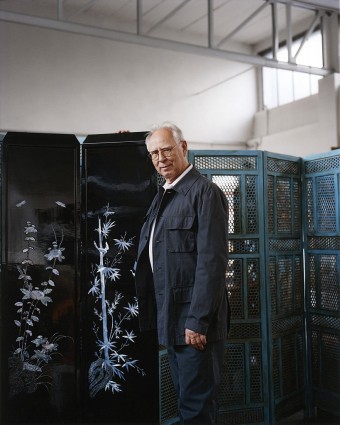 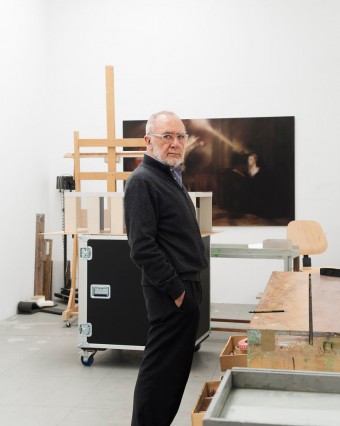