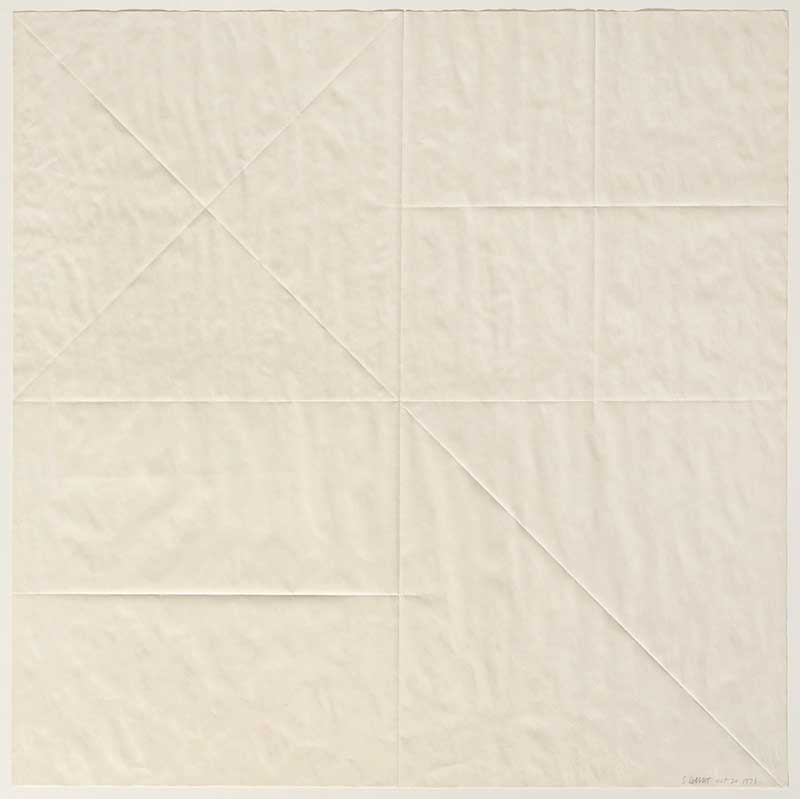 The Unique Multiples of Sol LeWitt

Paper Folds are part of Sol LeWitt's groundbreaking $100 Drawings series produced between 1967-79. Intended to be sold for 100 dollars, they had already exceeded that value by the 1980s. In today's market, with only a few remaining, their value has skyrocketed.

What is special about the Paper Folds is that they are unique pieces, produced individually, yet at the same time recognized as pioneering examples of multiples. In his political aim to democratize the arts, LeWitt claimed that art should be non-hierarchical and serially produced whilst the artist should renounce his claim to authorship. His wall pieces, for instance, were not executed by the artist himself, but by his assistants. This idea stemmed from his interest in Eadweard Muybridge's serially produced photographs on movement (1878), directly referencing this work in his early Serial Project No. 1 (1966), a project for which LeWitt even employed two mathematicians to calculate the number of different possible variations on the form of a cube.

LeWitt started serially producing his folded paper works towards the end of the 1960s, seeking to create a counterpart to the gestural and intuitive language of Abstract Expressionism. Based on the standard square form of paper, LeWitt's works consist both of surface and volume. Though they differ in size and paper quality, the Paper Folds are all explorations of the manifold variations on the square. It is in their folds that they reveal their dependency on a strict system and on LeWitt’s conceptual and dematerialized approach to his art.

In his treatise 'Paragraphs on Conceptual Art' published in Artforum in 1967—the same year as the first Paper Folds—LeWitt defines his conception of space as follows: "Space can be thought of as the cubic area occupied by a three-dimensional volume. Any volume would occupy space. It is air and cannot be seen. It is the interval between things that can be measured. The intervals and measurements can be important to a work of art." Every three-dimensional volume occupies unseen space, writes LeWitt, brilliantly demonstrating this idea in Paper Folds. The folds structure the surface of the paper and create volume through the pleats. They thus gain both outer and inner spatial qualities.

The Paper Folds are rare examples of editions that are also unique works. In their sparseness, they epitomize LeWitt's radical approach to and conceptual prerequisites for his art. Every step in the process is important—from the idea to the visible form. The idea itself, even if it is not made visible, is as much an artwork as the completed piece.


If you have any questions regarding Sol LeWitt's Paper Folds please contact us at collectors@fineartmultiple.com.