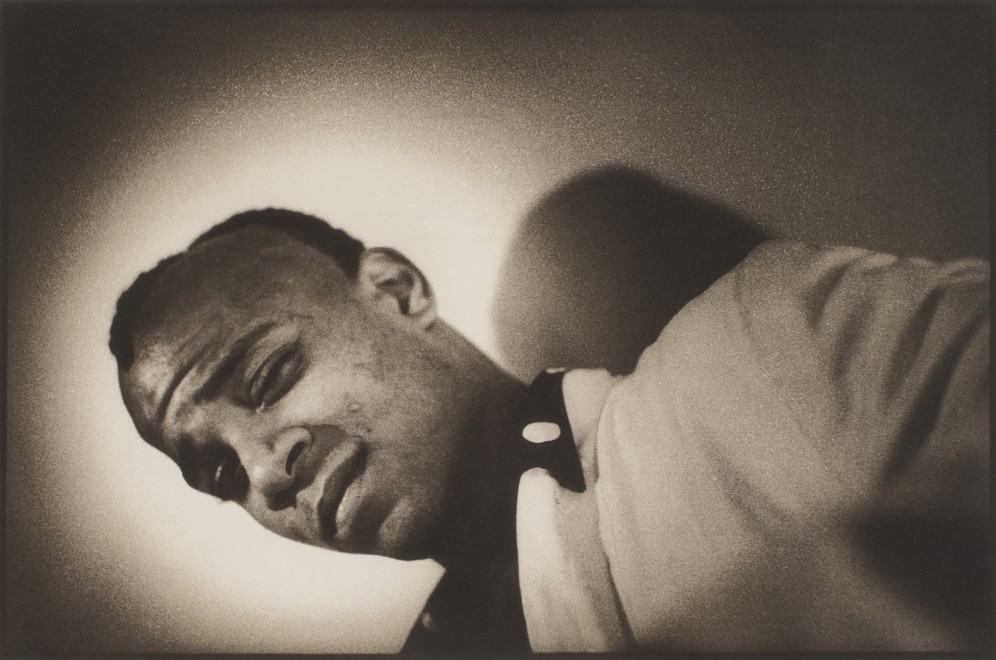 The iconic painter, Jean-Michel Basquiat, died of a heroin overdose aged only 27, leaving behind a body of work that used social commentary to reveal deeper truths about the individual. Iconoclastic, daring, and incredibly cool, Basquiat even had a New Wave punk band called Gray. Although he would describe his band's sound as being "oddly beautiful", many people saw it a little differently and we can be thankful that Basquiat chose to pursue painting rather than music. Their song I wanna go back can be listened to below. His band member Nicholas Taylor—a successful musician—recorded their friendship in an intimate and revealing series of photographs. Remarkably, this series captures Basquiat looking playful, but also somber and morose—perhaps they had just heard the band's latest mixes.

Whilst the artist Christian Marclay is exceedingly well-known, it is remarkable that he is not more recognized for his extraordinary exploits on the turntables. That's right, Christian DJ Marclay is one of the pioneers of turntablism. More incredibly, his use of a skipping vinyl on a turntable for its percussive effects at a concert in 1979 was one of the first times that such improvisation had happened. Marclay's work Ephemera carries on the artist's herculean enterprise of representing sound through visual form. A collage artist by trade, Marclay splices these techniques onto his collection of musical notations, vinyl, and material to make something entirely revelatory and new. 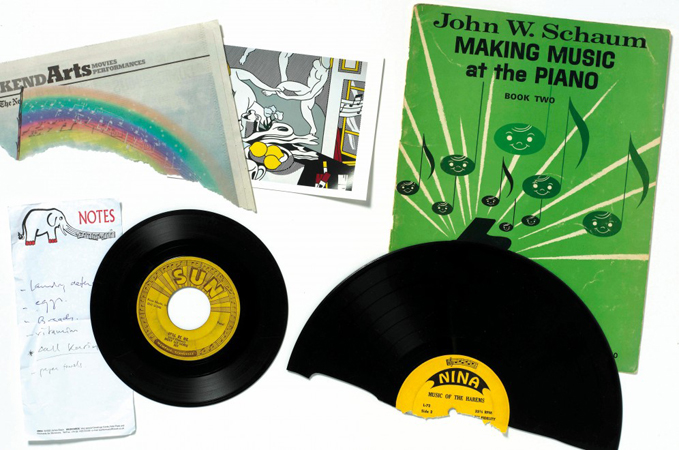 Spanish-born Santiago Sierra is a highly provocative and political artist. Highlighting issues of social injustice and exploitation around the world, he consistently champions those without a voice. He is indeed a superb artist, but you wouldn't want him laying down the tunes on your birthday party. In fact, by the evidence of his limited edition vinyl Europe, 2009 which plays the 27 national anthems of the European member states simultaneously, you want to keep him as far away from the turntables as possible. If he does manage to get behind the decks and start DJing whatever you do don't ask him to change the tune. The other side of the record is even more outlandish. Here he plays the national anthem of the European Union backwards and continuously. Signed and numbered by the artist, you want want to keep this vinyl safely in its sleeve and high up on the shelf, you don't want this limited edition mistaken for Europe's classic tune The Final Countdown—No. 1 in over 25 countries. 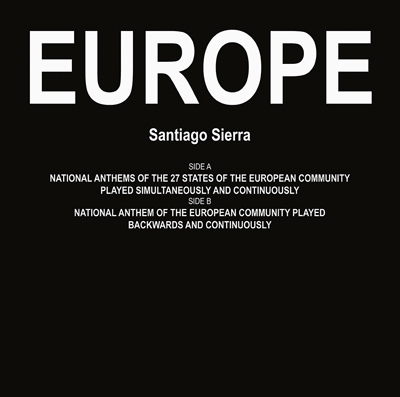 Jeremy Deller, History of the World, 1998

The artist Jeremy Deller is as English as David Bowie and cups of tea—both of which were consumed by the bucketload in Deller's British pavilion in the Venice Biennale in 2013. Deller's love affair with music is at the heart of his art practice—according to him the history of the world can be traced in the connections between brass bands and Acid House. One of Deller's earliest memories was seeing the miners going back to work after a strike accompanied by brass bands—they would all be unemployed three years later, their mines closed by a conservative government eager to move Britain out of its industrial past. A few years later the British government famously tried to curb raves with its Cultural Justice and Public Order Act. Seeing a connection between these disparate and maligned groups, Deller brought them together in an extraordinary conjunction. He got The Fairey Band, one of the most famous brass bands of the 90s, to cover legendary tracks from the dissenting rave culture. Acid Brass—What Time is Love is just one of the remarkable results. 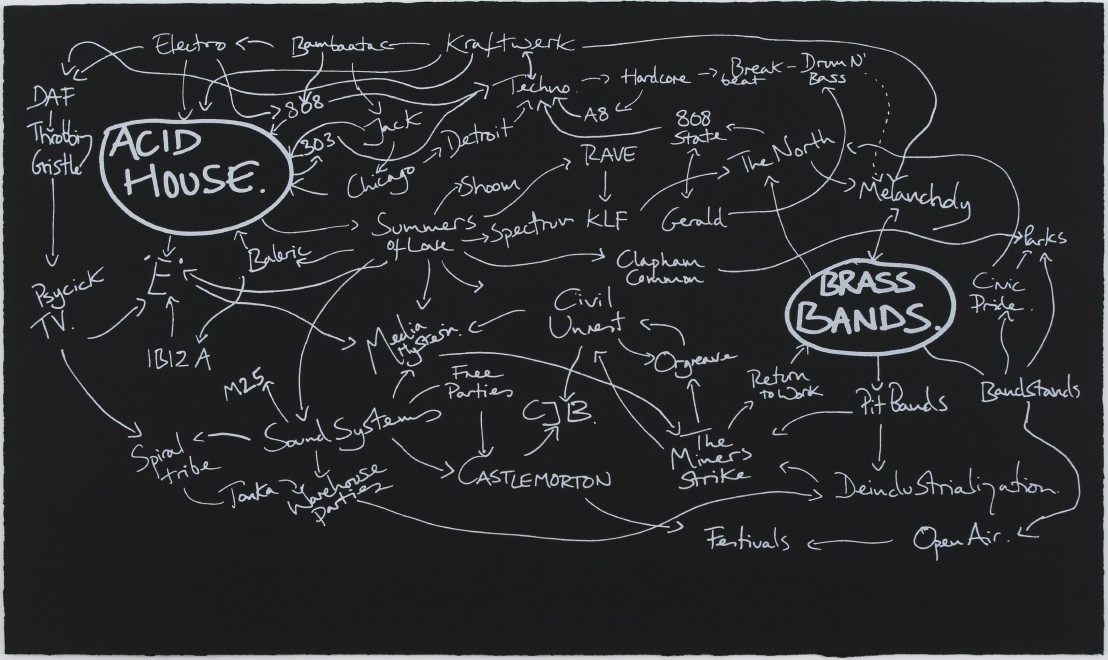 This is one of those rare occasions when a famous musician's art is on a par with his musical output. Magne Furuholmen, the keyboardist for A-ha and the writer of Take on Me and… lots of other songs, is a prolific and highly successful visual artist whose works can be found in the The Norwegian State Archives and the Bibliothèque Nationale de France. His woodcut Helter Skelter may not just allude to one of his favorite Beatles songs but its black dripping background hints towards something much darker. In 1969 on Charles Manson's orders, 9 people were killed in a frenzied attack inspired by subliminal messages he had heard in The Beatles' White Album. The name Helter Skelter, a song featured on the album and Manson’s code name for impending race warfare, was written in the victims' blood on the walls of the… Wait a minute, is it at all likely that the keyboardist of dreamscape pop band and Coldplay BFF is making art about a satanic serial killer? 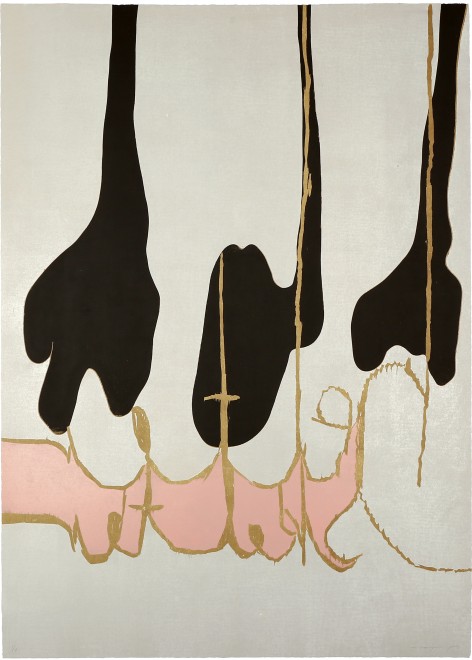 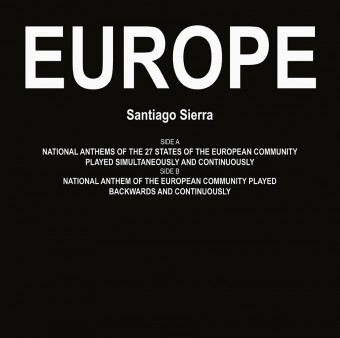 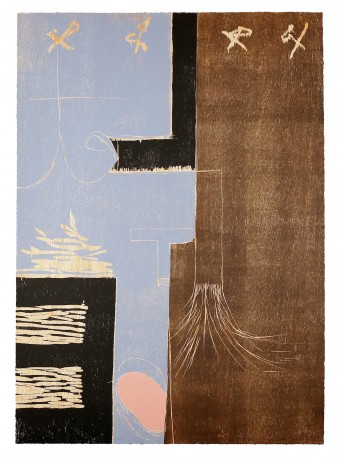