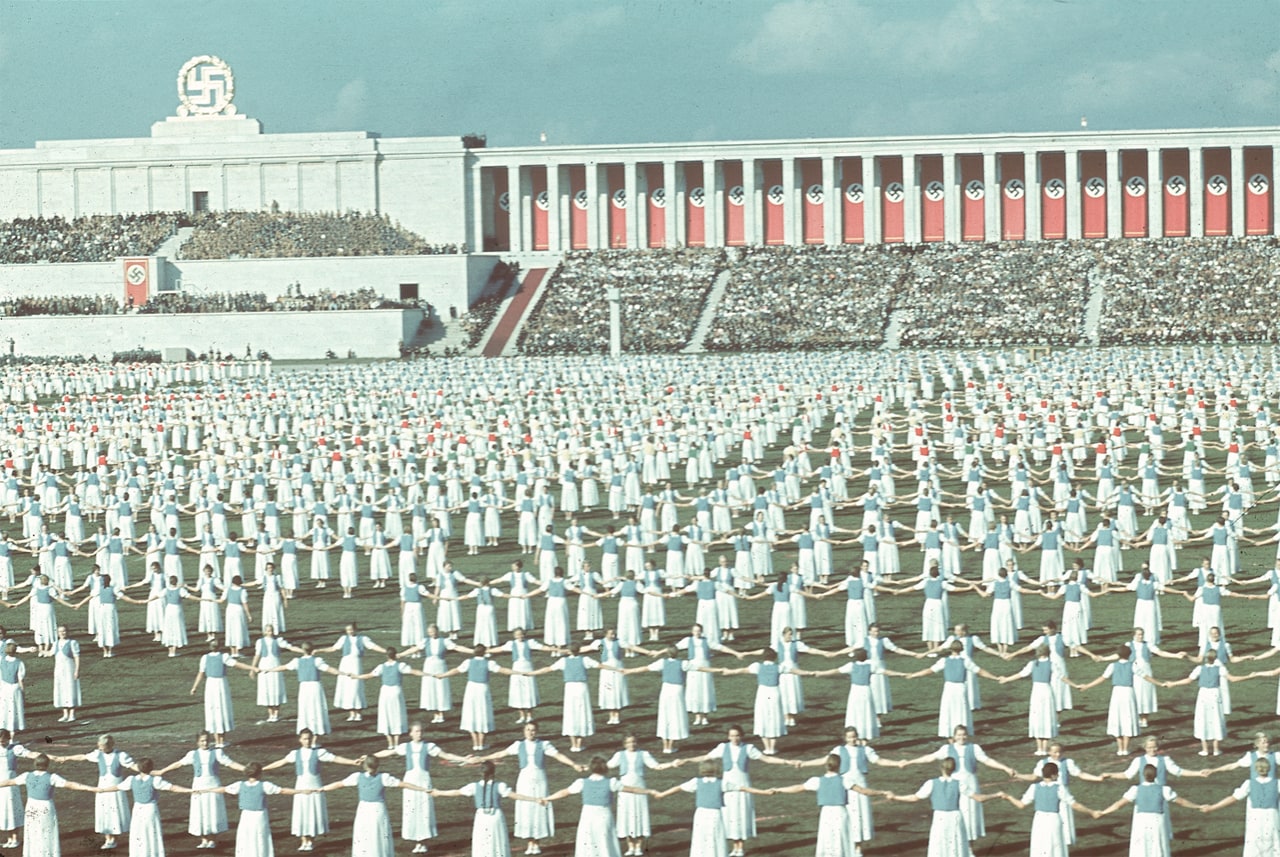 In the exhibition space of the Design Museum Den Bosch in Holland is a glass vitrine displaying multiple copies of an innocuous looking red book, laid out flat and open at different pages. They are copies of the Organisationsbuch der NSDAP a kind of style bible for the Nazis, filled with colourful annotated images of soldier uniforms, flags for every conceivable purpose, medals and other regalia and, right at the end, in its final 10 pages, a series of “blood mixing” diagrams that chart the genetic criteria for being recognised as a German citizen.

It’s a chilling indication of the sort of insidious all-encompassing detail that formed the backbone of the Nazis regime. An inextricable union of racist ideology and design, all neatly held together in a book that was once found in a large number of German homes.

It is one of around 270 exhibits on display in an exhibition aimed at exploring design’s “essential contribution” to the rise of National Socialism. To begin with however, instead of receiving praise for its attempt to further our understanding the exhibition was met with protests and condemnation, attacking the museums failure to give sufficient historical context and even worse, accusing it of a form of glorification. 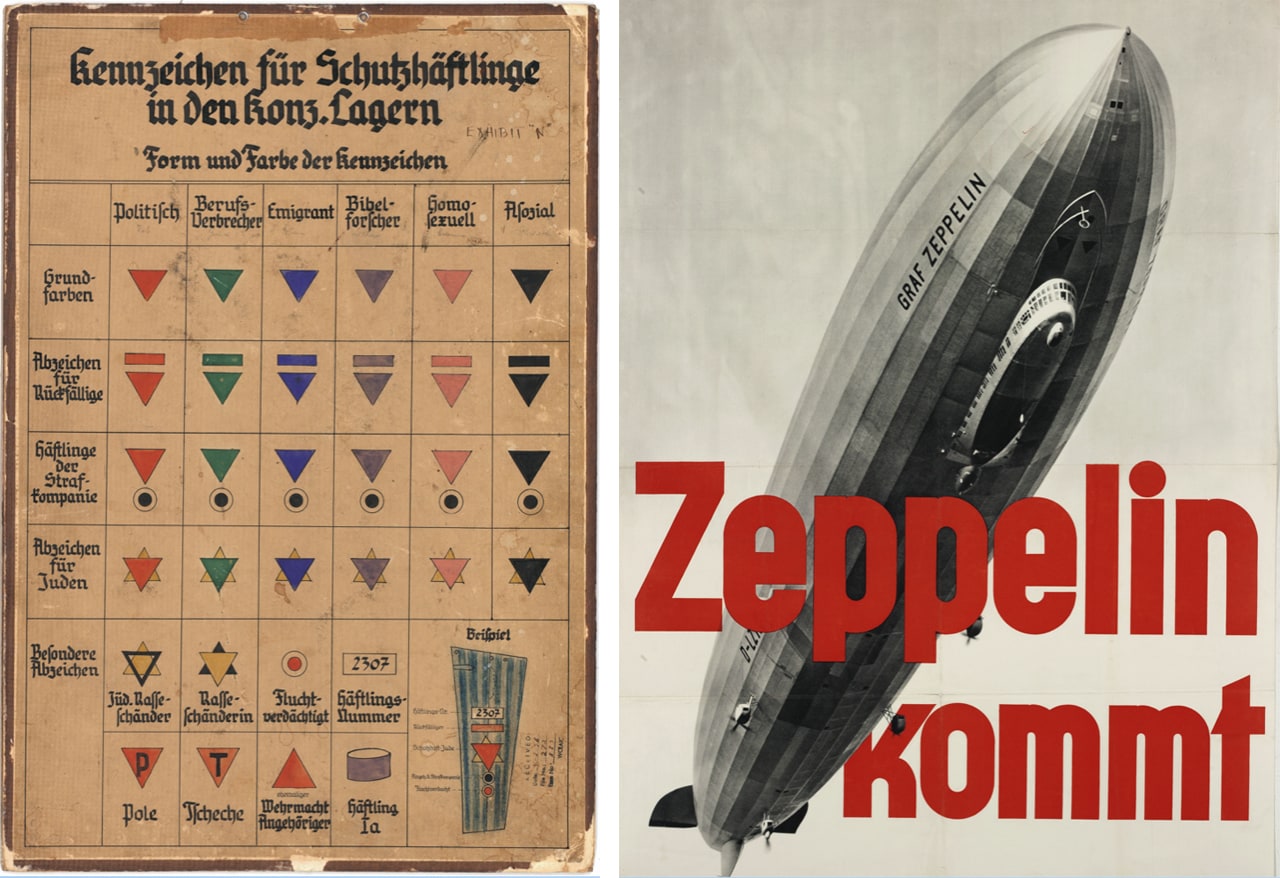 At a time when far-right ideologies are on the rise across Europe, an exhibition billed as the first great exposition of the “Design of the Third Reich” including work from Arno Breker, the favorite artist of Adolf Hitler (surely the worst endorsement) and propaganda films from Leni Riefenstahl, needed to be handled with immense sensitivity. Before the opening in September measures were put in place to offset any negative impact from the exhibition: photography was banned and the exhibition was given a documentary feel so that monumental films were shown on “small screens” and instead of allowing flags to hang they they were displayed flat on tables.

“We were determined,” says Timo de Rijk the Museum Director, “not to facilitate the seductive intentions of some of the exhibits.” So far at least, according to Rijk via email, “there is no evidence whatsoever that far-right visitors have visited the exhibition.” The difficulty of course is that by placing them in a design setting instead of a historical one, there is a perceived risk that the dangers associated with the exhibits would become neutralised. It certainly hasn’t stopped the public flooding into the museum with more than 27,000 tickets sold. 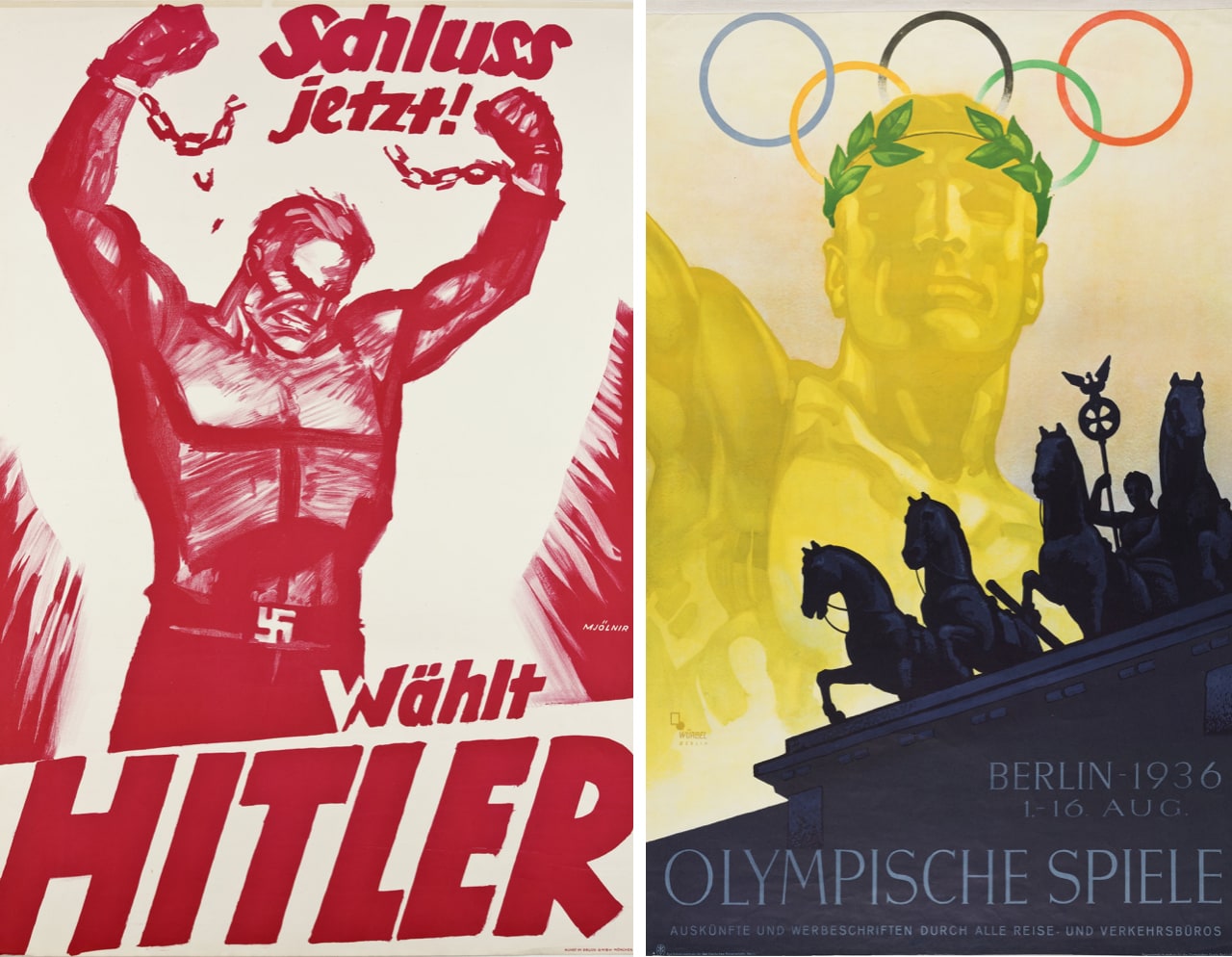 This is not surprisingly. Adolf Hitler and the Nazis are endlessly fascinating. 75 years after the collapse of their regime they are still the ultimate embodiment of evil. What singles them out in comparison to other murderous dictatorships is that with the Nazis it all came down to race. The exhibition begins with an exploration into the link between the racially pure Nazi ideal and the “design” of the “new man”. Hitler knew that to legitimise his party’s racist ideology he would have to employ bold design and striking imagery. His deification in the media and his carefully crafted public persona are depicted in the grotesque victory poses shot by Heinrich Hoffman. They allowed the “Führer” to gain insight into how he looked to the German public and to hone his showmanship for maximum effect.

Posters from 1933 reveal the extreme paradoxes inherent in Nazi propaganda. To the outside world they presented an alluring image of prosperity and carefree amusement whilst they had already begun laying the foundations of their first concentration camps. Architectural designs for the Auschwitz gas chambers have been included in the exhibition. Although camp archives were completely incinerated before the Red Army arrived, they forgot to destroy the construction plans. 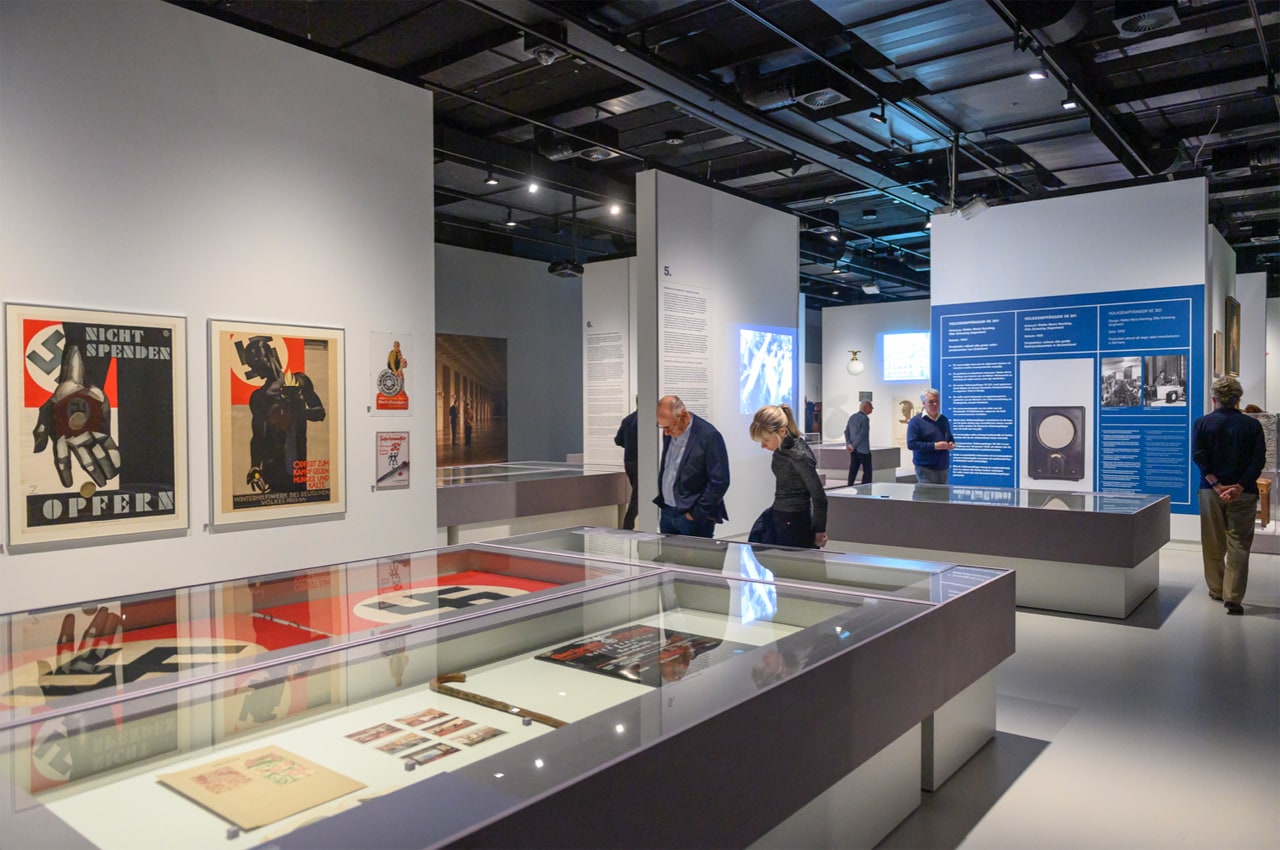 The exhibition reveals the sheer comprehensiveness of the Nazi campaign. Using every conceivable means to spread their propaganda and meld a mawkish nostalgia for the past with a maniacal appropriation of the future. The innovative Volkswagen Beetle is the only exhibit visitors are allowed to photograph. A design icon that managed to escape its “Strength Through Joy” origins despite being developed from one of Hitler’s own ideas.

An exhibition of this nature was never going to be free from controversy and from the beginning Rijk has stridently defended the exhibition arguing that a failure to show the works would amount to a desire to forget history, an omission he claims would risk “making fascism actually seem mysterious and attractive.” It is a questionable statement but one that nevertheless points to a more systematic failure in our understanding of how Nazi ideology continues to appeal to a small minority. 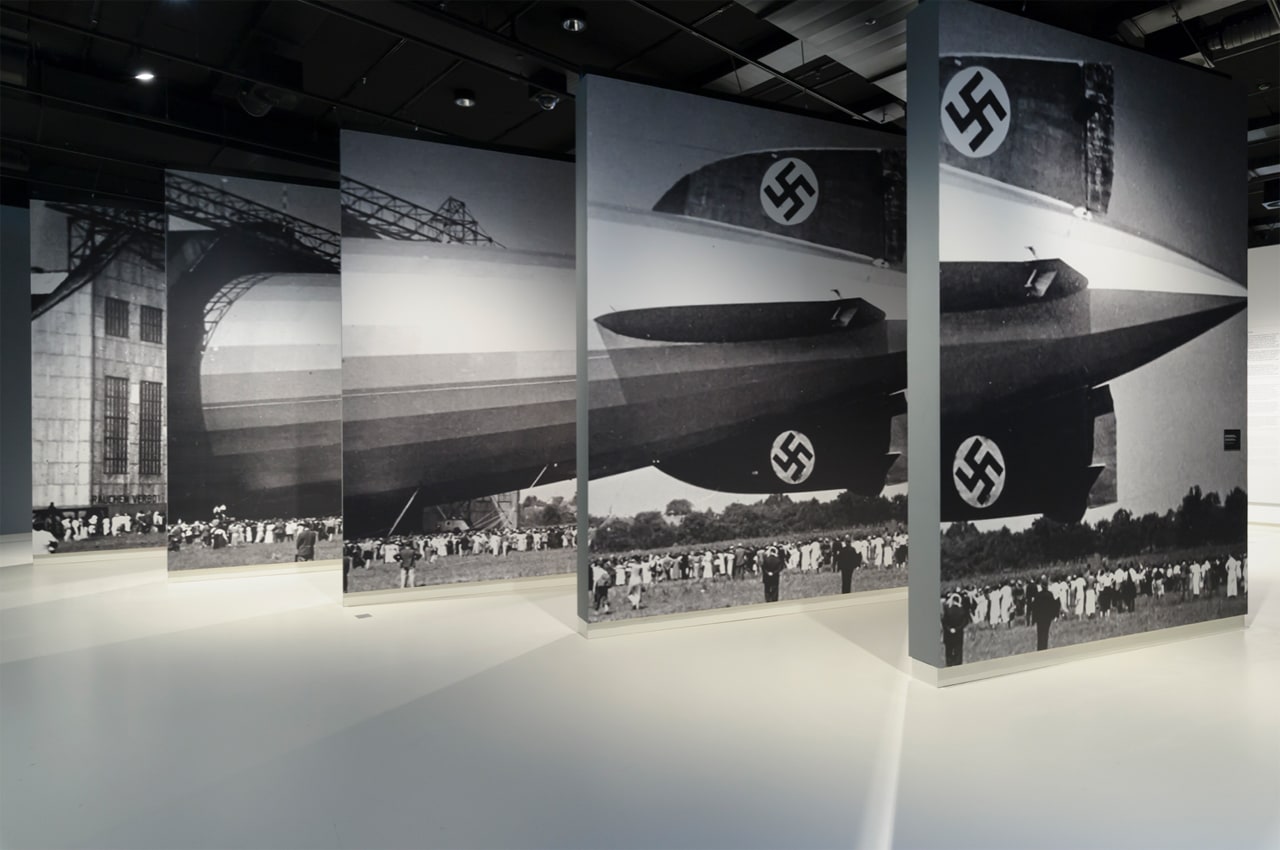 Since 2018 Germany has recorded a 60% rise in anti-Semitic violence. Just last week a 27-year old man killed two people whilst attempting to gain access to a synagogue in Halle, live-streaming his actions and making misogynistic and anti-Semitic statements to the camera. According to Florian Hartleb, a lecturer of political science at the Catholic University of Eichstätt-Inglostadt his words were largely “strung together from Internet-ready memes”, not so much an ideology but the actions of a socially isolated individual still living at home with his mum.

Whether the Design Museum Den Bosch was right to put on the exhibition is perhaps not the correct question. As Rijk makes clear, radical right-wing movements of today are not “interested in Nazi aesthetics and symbolism, they have developed a completely new visual vocabulary for some time. I find that really frightening.” Regardless of what is going on in our museums of culture, radicalisation is taking place on anonymous online forums behind closed bedroom doors. An exhibition such as this is still a long way off coming to Germany where a mixture of politicial, cultural and historical sensitivities could never allow it to take place. If nothing else the “Design of the Third Reich” has instigated a pertinent debate at how best to exhibit and display these horrifically-loaded artefacts for future generations.

The Design Museum Den Bosch exhibition “Design of the Third Reich” is on view until the 19th January 2020.