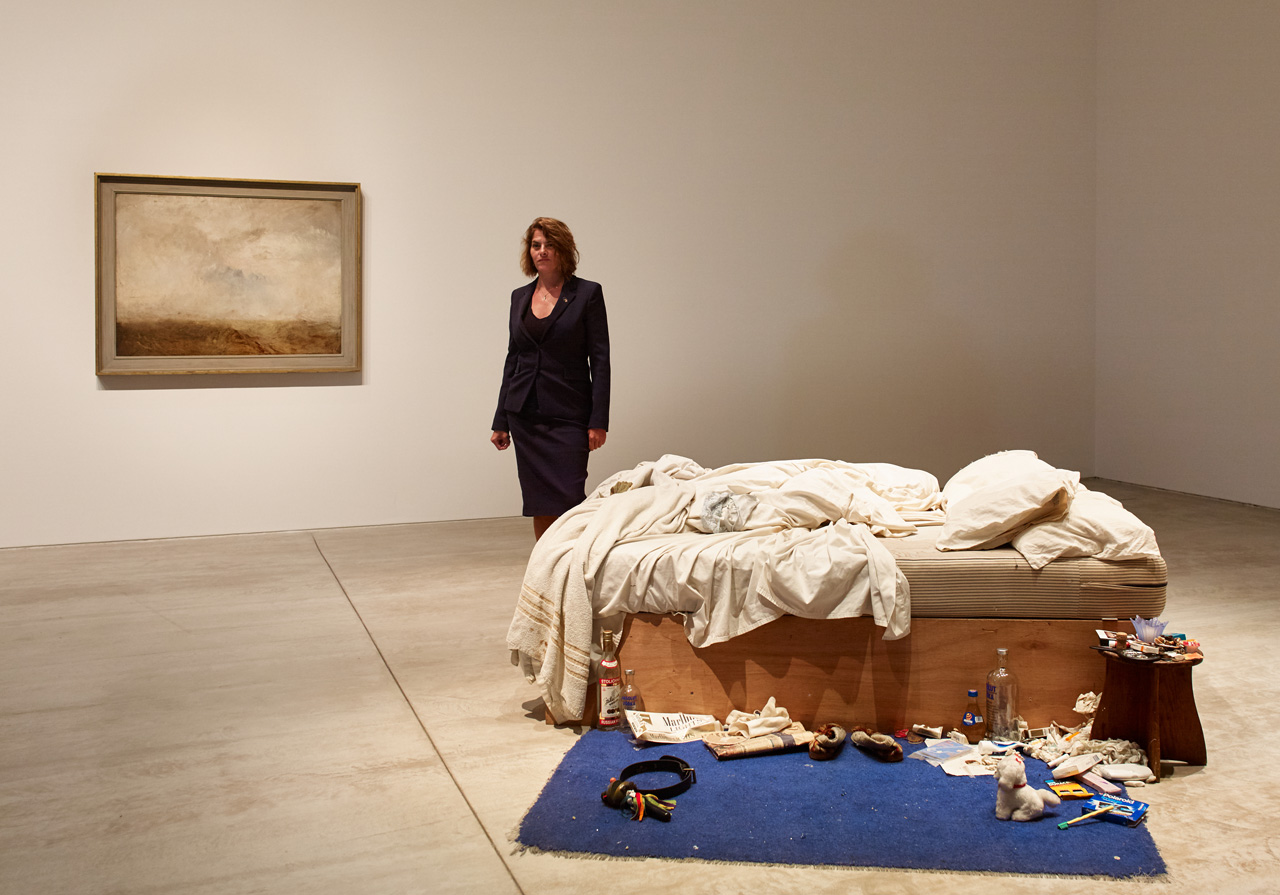 Still filthy, still repulsive, and still one of the most moving works of contemporary art, Tracey Emin’s My Bed, 1998 gave us a delicious glimpse into the lifestyle of a despairing 35-year old artist. The crumpled bed sheets still seemingly ooze with her bodily secretions, the blood stain from her period clearly visible to all onlookers. When it was shortlisted for the Turner Prize in 1999 (shockingly it didn’t win), the work provoked such a media frenzy that the Tate’s visitor numbers were at an all-time record high.

The idea for the iconic artwork came to the artist like an epiphany after spending a week in bed, depressed after a traumatic breakup of a relationship. Barely conscious and still drunk, the artist came to this realization: “I just suddenly thought, ‘This is horrific.’ And then it all turned around for me. It stopped being horrific and started being beautiful. Because I hadn’t died, had I?” Quite simply she then took her bed directly out of her Waterloo council estate apartment and exhibited it. 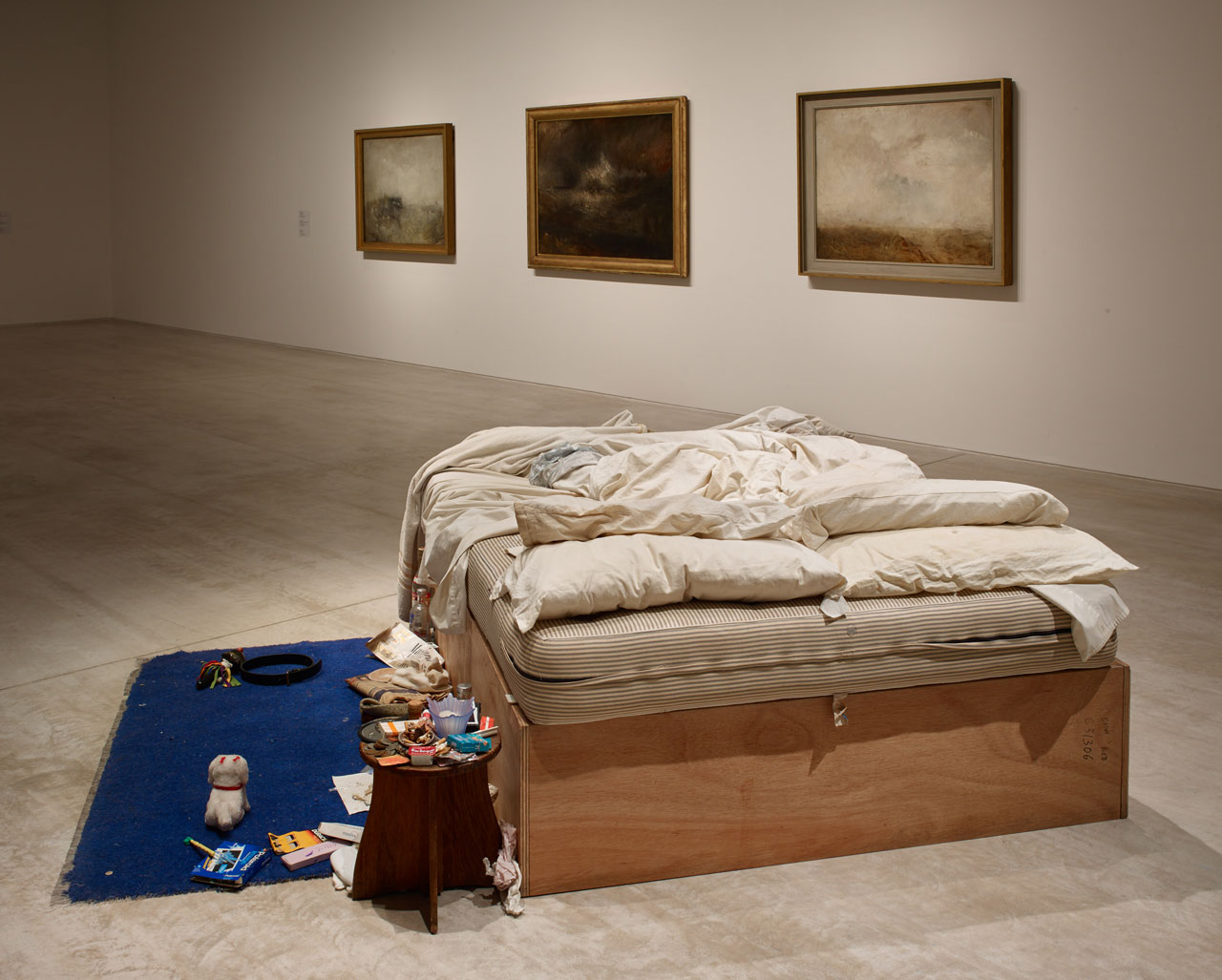 Now nearly twenty years on from its first exhibition, the artist sees the readymade differently: “With history and time the bed now looks incredibly sweet and there’s this enchantment to it. I think people will see it differently as they see me.” But more than that, the bed is now a monument to the artist’s own history, a “ghost” from her past: “There are things on that bed that now have a place in history. Even forms of contraception, the fact that I don’t have periods anymore, the fact that the belt that went round my waist now only fits around my thigh.”

It is perhaps the only artwork capable of challenging Damien Hirst’s The Physical Impossibility of Death in the Mind of Somebody Living as the most famous artwork to emerge from the YBA Movement in the 1990s. It was made at a time when the British art scene was riding high, when it was all “about cool Britannia and the shock factor”, said the artist. Each time the work is exhibited, Tracey Emin always takes the time to recreate the installation herself, delicately placing the soiled tissues, K-Y Jelly, used condoms, slippers and fag butts.

With the status of a Rock Star, Tracey Emin’s most lauded work has been on a tour of the main Tate galleries around Britain. Now finally it is making a triumphant return to Emin’s home town of Margate to be shown at Turner Contemporary. At Tate Britain the installation was exhibited alongside some Francis Bacon canvases, but at Turner Contemporary the work shares a room with a selection of watercolors by JMW Turner, selected by Emin herself.

Turner was also a former Margate resident, and he regularly returned there to paint the stunning sea and skyscapes. Each of the selected works depict turbulent skies and choppy seas. His vigorous brushstrokes and hectic use of paint evoke the energy of a storm, and echo the turmoil of Tracey Emin’s My Bed.

In marked contrast to Robert Rauschenberg’s famous Bed, 1955, which saw the artist actually paint on his bed sheets when he had nothing else to hand, Tracey Emin fused her art and life by exhibiting something intimate and from her personal space. Such confessional, candid art established a relationship with the audience, who were able to relate to its universal themes of loss and alienation. Personal truth telling then goes beyond “the me culture”, according to writer Jeanette Winterson, “and into collective catharsis.”

Originally bought by Charles Saatchi in 2000 for £150,000, it was put up for auction in 2015 at Christie’s, London and sold for £2.5 million (hammer price plus buyer’s premium)—over double the pre-sale estimate. Although this was out of the price range of the Tate, the buyer, a well-known German businessman and art collector, Count Christian Duerckheim, has generously loaned the work to the Tate for 10 years. “I always admired the honesty of Tracey, but I bought My Bed because it is a metaphor for life,” said the count soon after his purchase, “where troubles begin and logics die”.

Tracey Emin wants us to see My Bed as “a portrait of a younger woman and how time affects all of us. I am still very proud of it and I am grateful that the right person bought it.”

Tracey Emin’s My Bed can be viewed at Turner Contemporary from the 13th of October through to the 14th of January 2018.