Carl Andre At The Hamburger Bahnhof—A Radical and Innovative Sculptor

The exhibition intends to give a thrilling insight into the radically innovative sculptures produced by the artist from the mid-60s onwards. Andre helped redefine the viewing public's experience of art by making sculpture become place. On show are approximately 50 sculptures, 200 poems, a group of rarely seen works he titles Dada Forgeries, as well as a selection of photographs, allowing the viewer to perceive the changes in this controversial artist’s production.

Andre once caused uproar at The Tate, London after his work Equivalent VIII was bought by the gallery in 1972. On the 15th February 1976 an article appeared in The Sunday Times about recent additions to the Tate's collection, illustrated with a picture of the work in question. Consisting of 120 bricks organised in a rectangular formation, this sculpture inspired ridicule from the press who reported that the Tate had got conned into buying a “pile of bricks”. Others of course recognized that the museum had been right to recognize Andre as a highly important artist and his work to be a significant addition to its permanent collection. 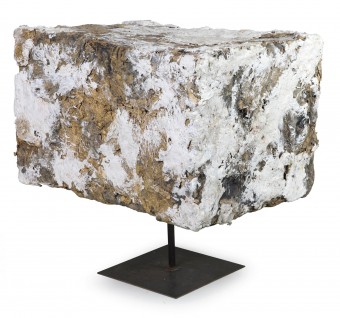