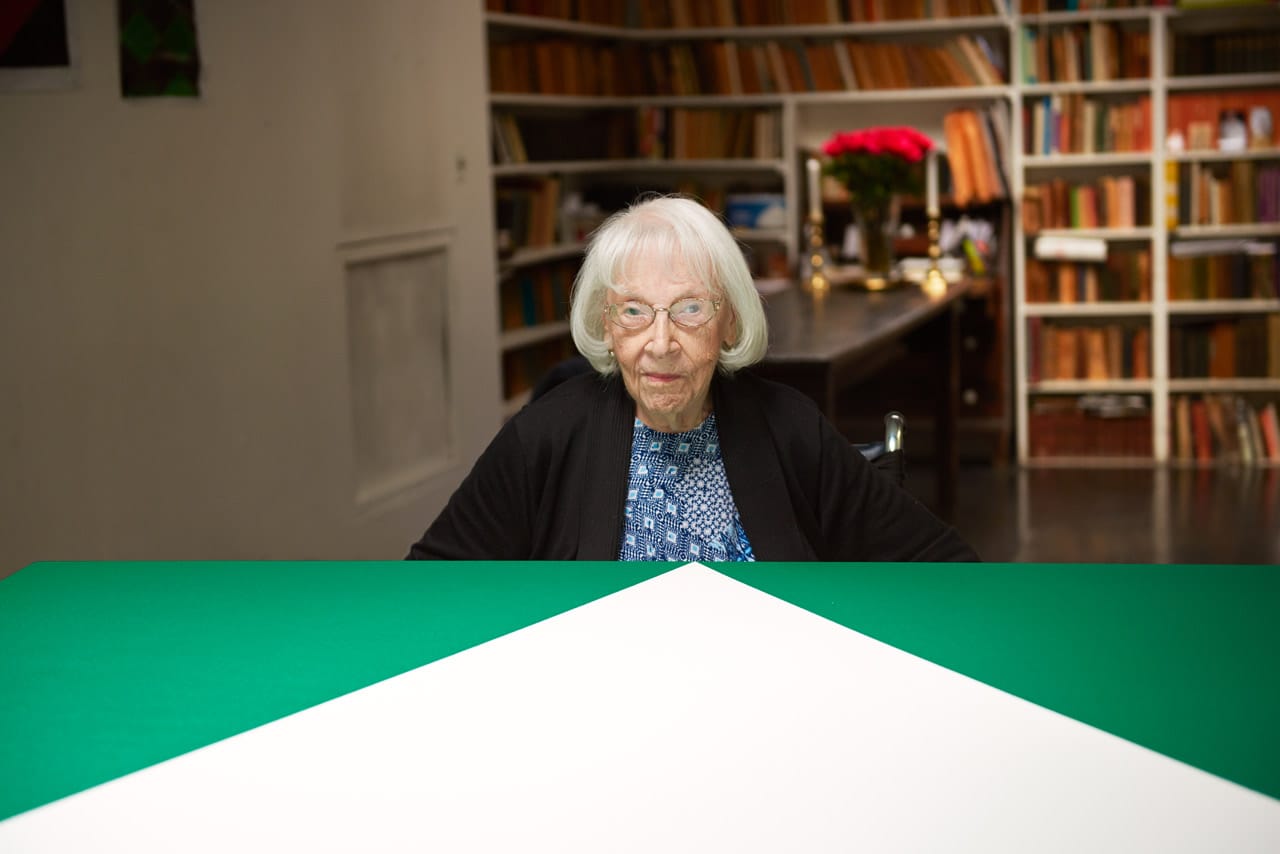 Crisp lines and flawless symmetry characterize Carmen Herrera’s pure geometric abstractions and tetris-like sculptures. The Cuban artist, who celebrated her 103rd birthday in May, is perhaps the oldest contemporary artist working today and, in spite of her age and arthritic hands, is still undoubtedly in her artistic prime with a number of exhibitions in recent years. Her jazzy linear patterns have become synonymous with the abstract and minimal work of her contemporaries such as Ellsworth Kelly and Barnett Newman, but it is unfortunately only retroactively that she is being inserted into art historical narratives. Her story and recent success is testament to the prejudices and failings of the highly male-dominated art world throughout the 20th century.

Born in Havana in 1915, Herrera developed her craft for over seven decades, pursing in her quest to discover “the simplest pictorial resolutions” while remaining marginalized from the mainstream art establishment. It was only when she was in her 80s that she was “discovered” by the market and her work began to be purchased by major museums. She had an intermittent string of solo exhibitions across New York from the 1950s onwards but it was her 1998 show at El Museo del Barrio which really put her on the map. Since then she has exhibited many times at Lisson Gallery—a show of her work is currently on display at their New York space—and in 2016 the Whitney Museum finally celebrated her achievements with a major retrospective.

Herrera originally studied architecture at the Universidad de la Habana and it is easy to notice these influences in both her paintings and sculptures. From the very beginning of her career, she dismissed the figurative and took inspiration from the lines and shapes of Bauhaus buildings as well as the geometric forms of Russian suprematists such as Kazimir Malevich. She abandoned her architectural studies a year into the course however, after falling in love and marrying her life-long partner Jesse Loewenthal in 1939. 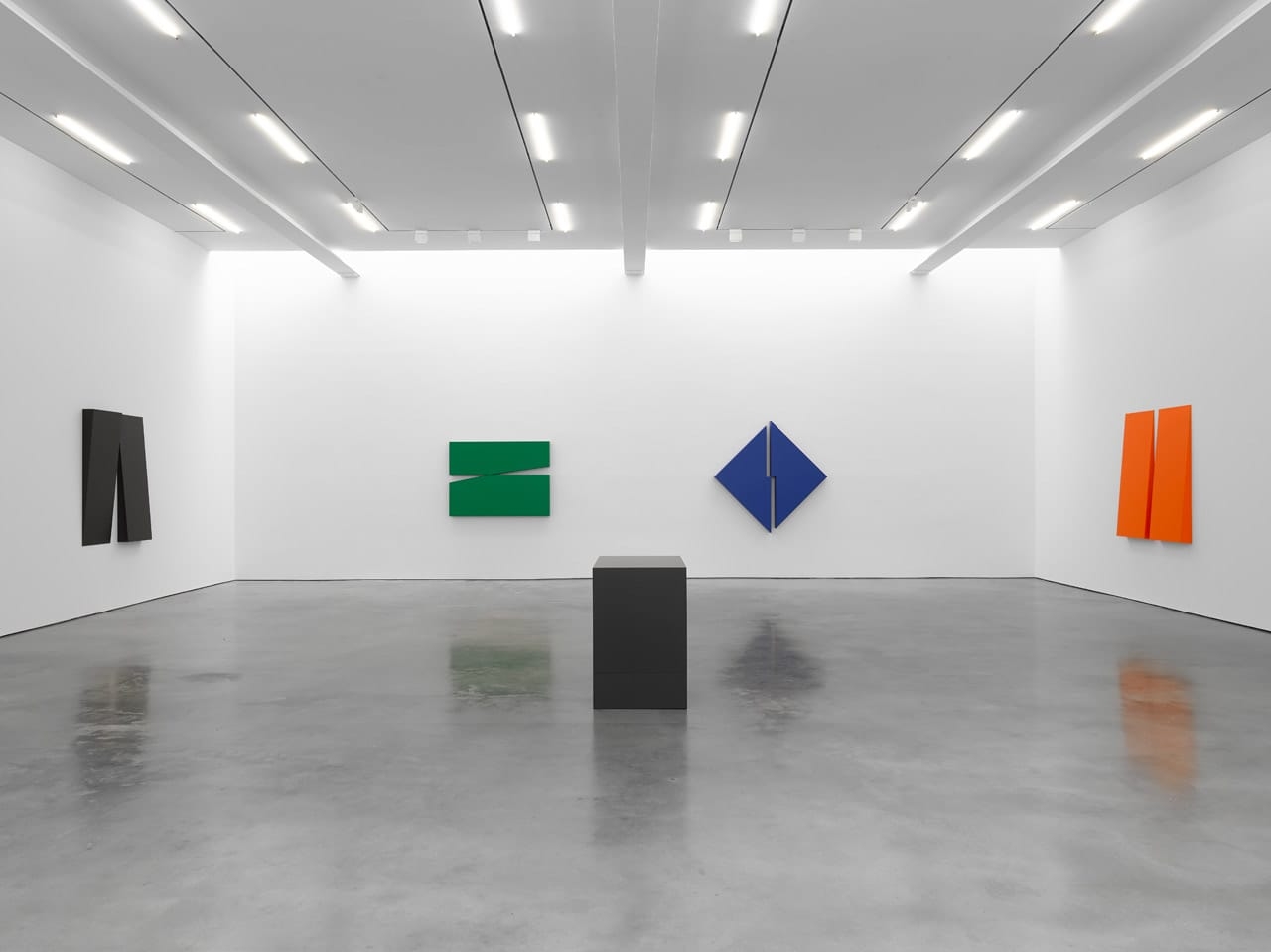 After the war, the pair moved to Paris and Herrera refined her signature style. Limiting her palette to a maximum of three colors, she began to construct compositions of interlocking forms. Her canvases were filled with sharp edges of green interrupting fields of white or zig zags of blue sharply clashing with backgrounds of red. Drawn to primary colors, the hard-edged abstraction that she developed during these years has remained the central element in her visual language. While in Paris Herrera was also introduced to a number of members of the artistic and cultural elite, including Jean-Paul Sartre, Simone de Beauvoir and Pablo Picasso—who Herrera deeply disliked. Her work was included in shows at the Salon des Réalités Nouvelles, a juried survey of abstraction in Europe, but this only gained her little recognition.

Herrera and Loewenthal moved back to New York in 1953, where they were similarly surrounded by artists. Herrera grew close to other abstractionists such as Mark Rothko and Barnett Newman—reportedly having breakfast every Sunday morning with the latter—but was once again not credited with the same level of acclaim. As a Latino woman she was isolated from the gallery system and the masculine culture of the dominant Abstract Expressionist movement, meaning she was not able to achieve the commercial success of her American male peers. While she admits that of course this initially bothered her, she equally acknowledges that she became liberated by such neglect and enjoyed the artistic freedom it afforded her.

In 2002, a year after Herrera’s first widely visited and press-covered solo exhibition in America, Jesse Loewenthal died aged 98. Two years later, at age 89 Herrera had her first significant sale and after nearly seven decades as an artist, her career finally began to take off. In her case, it is her age that has given her power and she has managed to outlive most of her contemporaries. Herrera’s work to this day remains vivaciously colorful and sharply abstract, a true reflection of her unwavering commitment to her craft in the face of unrelenting adversity.

Carmen Herrera: Estructuras is on display at Lisson Gallery, New York from September 14 until October 27, 2018.