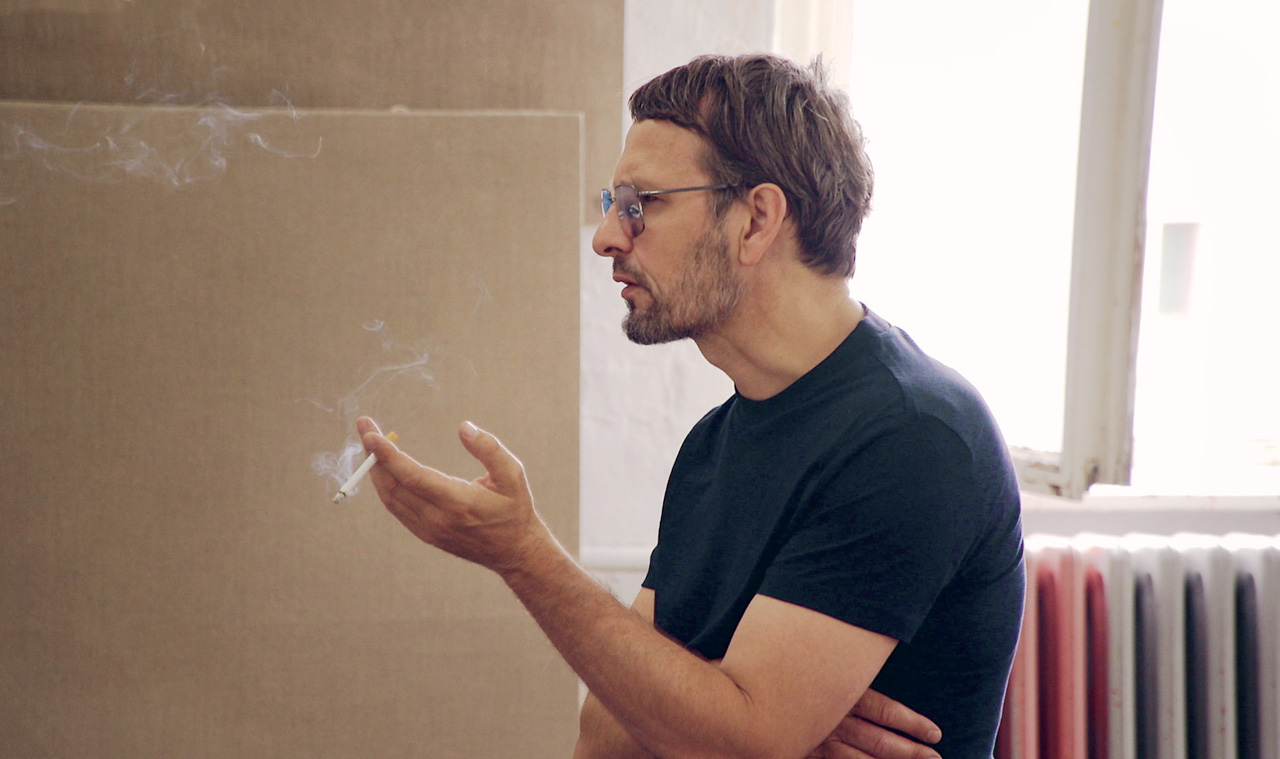 Something nasty is usually going on in Daniel Richter’s artwork—Batman being flogged while Snow White stares at the dead dog in her lap, or in his Letterpress editions revealing the clinical delight of crudely drawn Medieval torturers. Much of his work is teeming with turbaned Taliban loyalists and army commandos, primed to attack against off-screen adversaries, more often than not his figures inhabit a paranoid and unstable world.

He grew up in a small town not far from Hamburg, where he immersed himself in the music world designing album covers for jazz and punk bands having been expelled from school for chucking a chair at his teachers. “There was nothing else. It was just the hippies and the squares, and that’s it.” He says, “And the hippies were lame assholes, and the squares acted like they ruled the world. They still do—even though they have tattoos now and spiky hair.” Richter has always been a natural story-teller but his use of narrative is devoid of parable, much of the enigmatic impact of his greatest work stems from unresolvable threads of story. Often oozing violence and disorder, it is as if we as spectators are involved in these ambiguous acts unfolding before our eyes, complicit in our desire to piece them together.

Other than music there were only two things he was interested in “One was philosophy and the other was art. And since I’m not disciplined enough for philosophy, there was only art.” Enrolling at the Academy of Fine Arts in Hamburg he learnt how to “think of art as an idea.” Without art school “I would have just sat in my kitchen and painted.”

In fact, much of his work deals with aggression and political alienation, an attitude entirely in line with punk. A legacy perhaps of his left-wing activism in Hamburg and Berlin soon after the wall came down. There was something punk too about his adoption of painting in the early 90s at a time when irony and skepticism had taken hold of the medium, when it was choking under its own self-mockery. He studied under the great Werner Büttner, an instrumental figure in initiating painting’s renaissance after a decade of conceptual art. 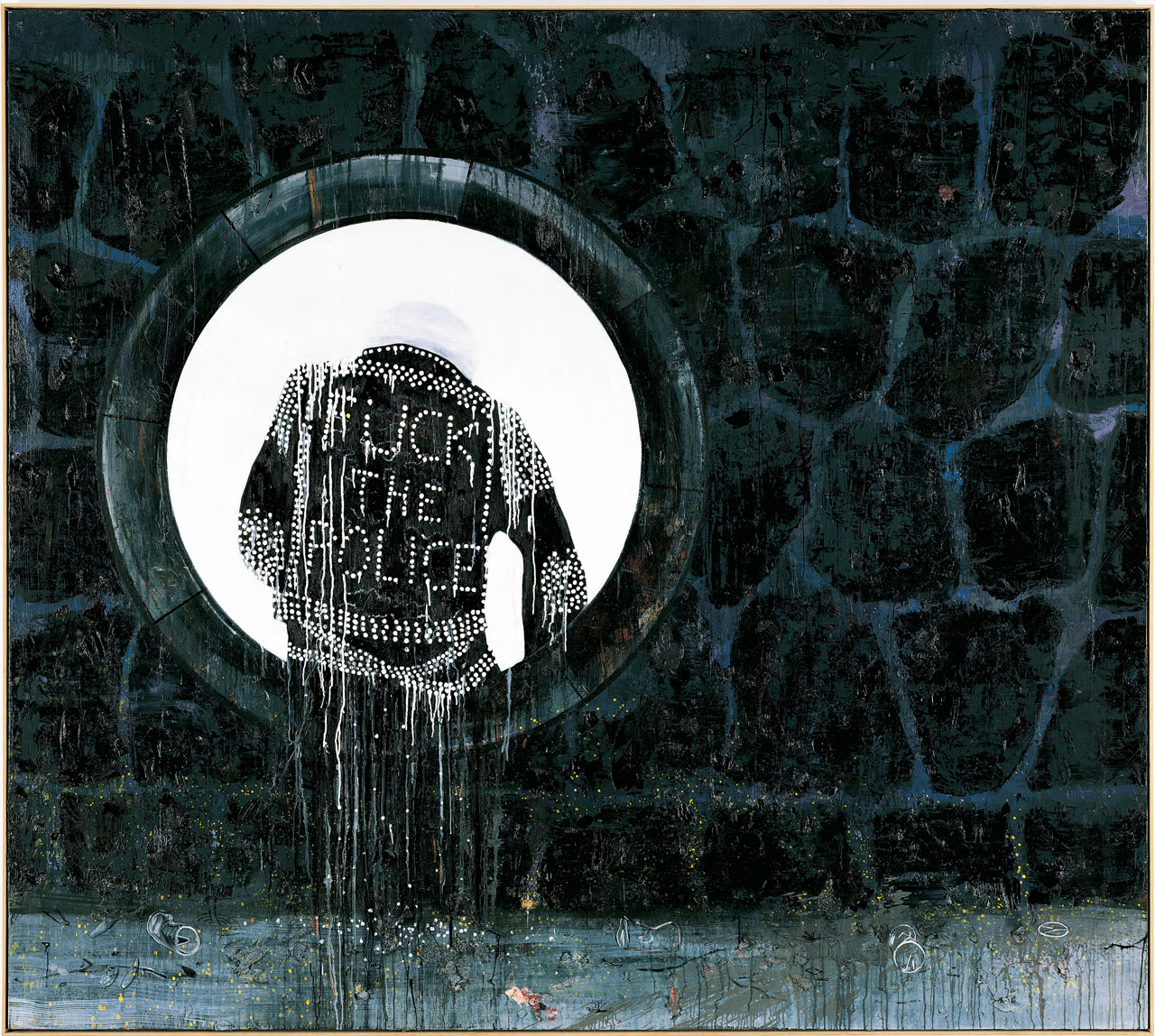 In Richter’s latest exhibition at the Louisiana MoMa, co-curator and director, Poul Erik Tøjner, has written about Richter’s ability to “encompass a universal situation” from local subject matter, and by doing so encapsulating the fragility of civilization through the disorder of individuals.  Now, under the title “Lonely Old Slogans” the exhibition in Louisiana features 45 paintings ranging from the early abstract pictures from 1995 to the present day, in which Richter once again flirts with abstraction having abandoned it just a short time before the turn of the century, a move that precipitated widespread critical success.

In the exhibition Richter’s use of defunct and obsolete political slogans such as “Fuck the Police”, brings to mind a kind of nostalgic rebellion, but also a sense of resignation in the face of so much unsettling news. His tendency to take figures and other imagery from from photos sourced from the global media adds to the intensity of his work—entwining a fabric of reality into his hallucinatory and psychedelic works.

But what makes much of this new exhibition so intriguing is that it comes after a significant break for the artist, who recently remarked: “there were one or two years when I had very hard time believing in what I was doing. I was just unable to formulate anything. I did some very stiff figure paintings and they also needed to be stiff because they were aiming at bitterness and frustration.” Now his return is marked by his interest in the potential of pure paint “the brush, the thickness of colors, translucency, opaqueness.” He feels less of a need to comment on the “world and myself”, but he has never been an artist fearful of altering his direction. 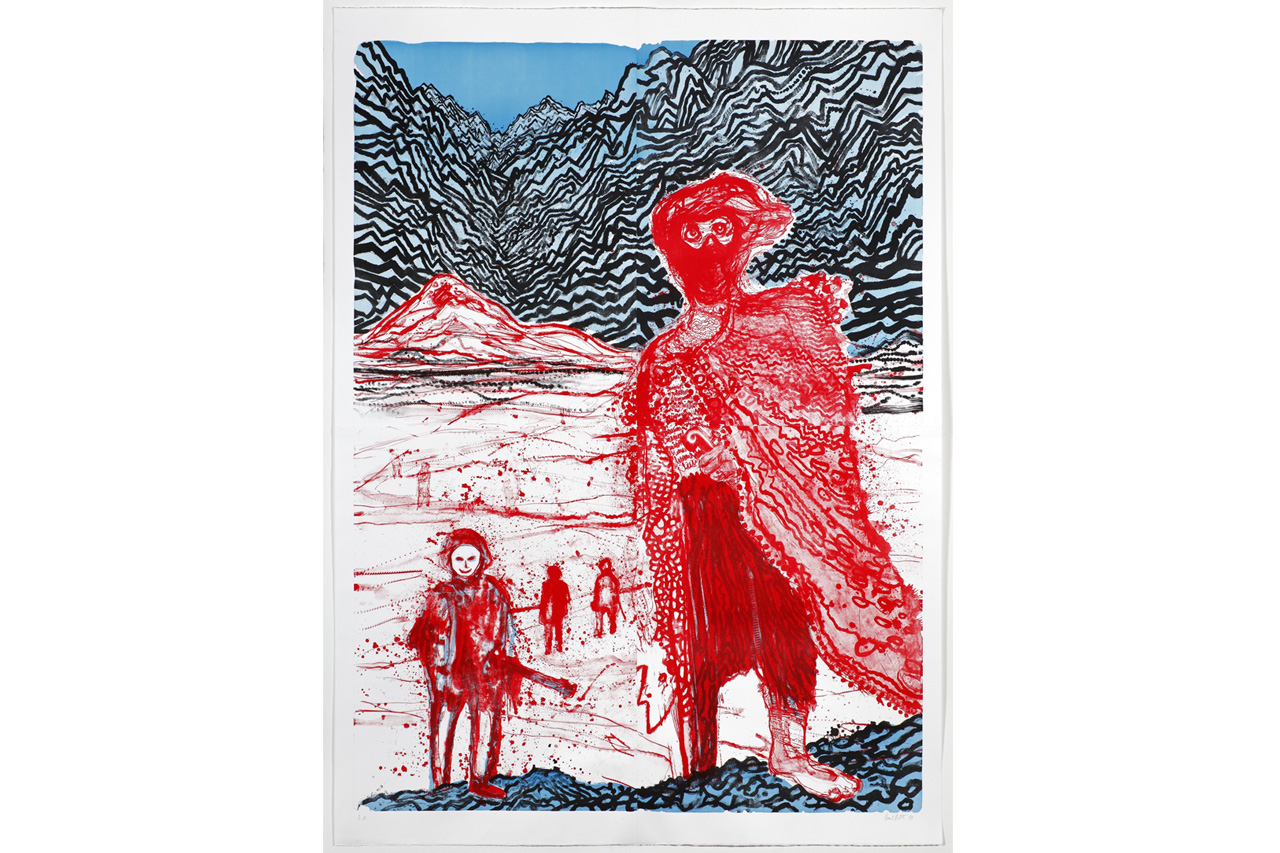 Encounter in the Hinterland
Daniel Richter’s artwork Encounter in the Hinterland, 2011 is typical of his nightmarish and hallucinations scenarios that are rooted in the global news media. Here the artist hybridizes the abstract and the figurative, a fairy tale with a threatening scenario of conflicting narratives pointing towards our globally altered perception of a post-9/11 Orientalism. The red figures look like they are being spied through the lens of an infrared camera. Lines reminiscent of topographic patterning cloak the seemingly endless mountains in the background emphasizing the environment and its inhabitant's alien nature.

Untitled 2007-1, 2007-2, and 2007-3
Use of the Letterpress printing method in Daniel Richter’s artworks adds a macabre edge to the iconography of medieval torture. These three Untitled works feature an unusual pairing of the lurid and the naïve. Victims, masked in expressions that recall Edvard Munch’s The Scream or a grim take on the smiley faces of popular culture, are stretched over spiked wheels, crushed by giant presses, and dangled over fires. The gruesome acts take place in an idyllic pastoral landscape of the artist's creation, paired with light affectionate and seemingly out-of-place elements such as the monumental monochrome bird that adds to the black humor of the scene.

Daniel Richter “Lonely Old Slogans” at the Louisiana MoMA in Denmark runs from the 8th of September though to the 8th of January 2017. The exhibition will travel on to Vienna and London. 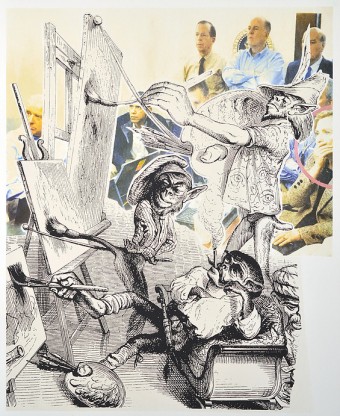 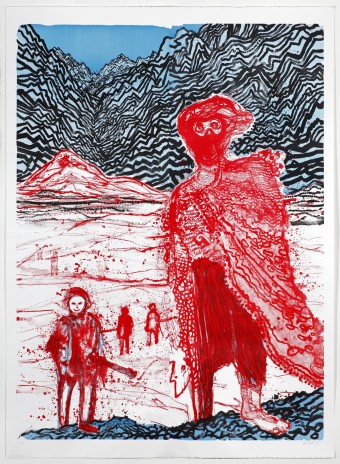 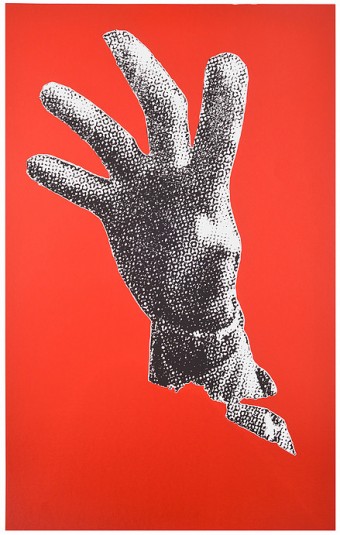