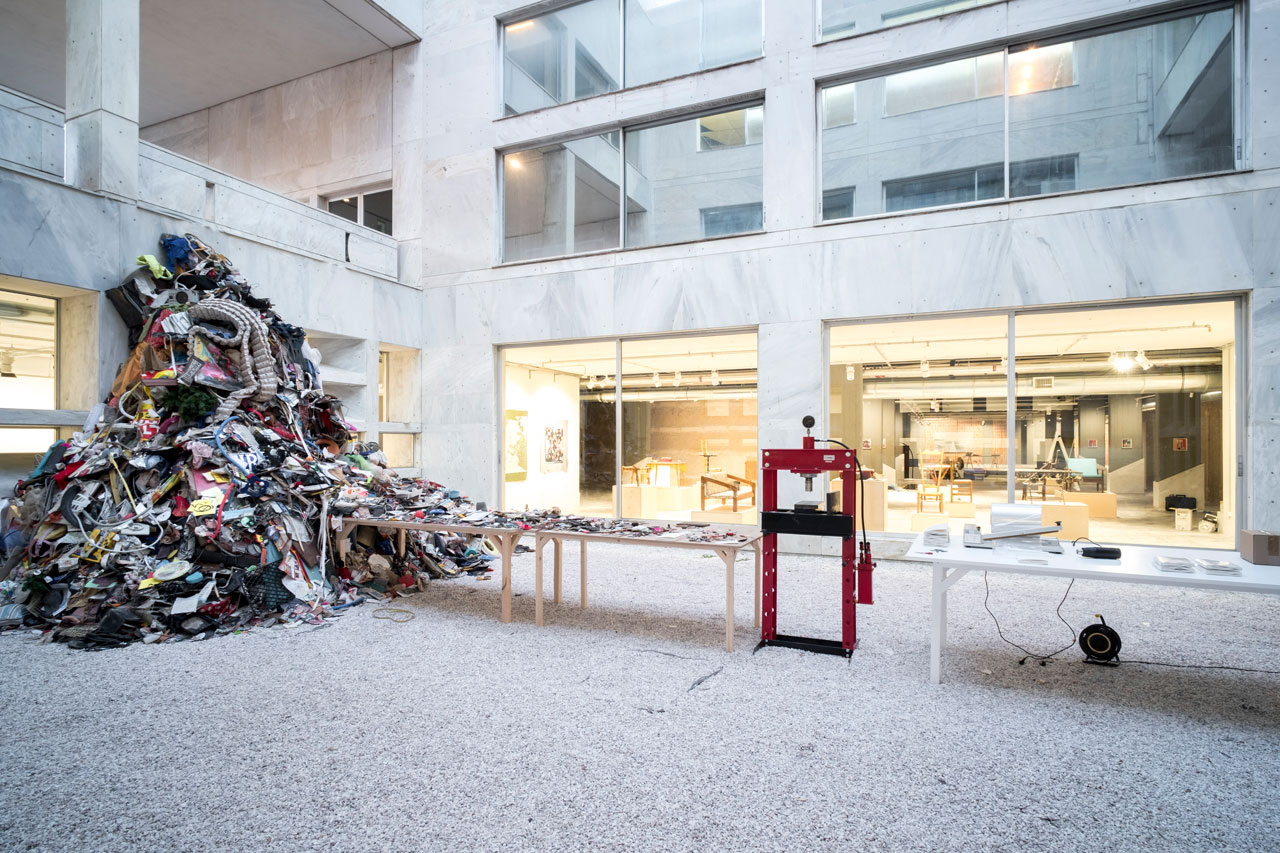 documenta 14 in Athens—Sprawling and Urgent

In the entrance hall of documenta 14’s main space you are greeted by a huge tray of olives entitled Payment of Greek Debt to Germany with Olives and Art. Were that only true. The financial situation in Greece is nothing short of dire, and forcing the art world’s great and the good to descend on Athens after the decision was made to split documenta is not going to make the slightest bit of difference. But it is a neat joke, downplaying the tension that has built up between Greece and Germany since the debt stand-off in 2015, and showing just how pitiful the whole situation is.

The team behind this year’s documenta have tried valiantly to make its division between Kassel and Athens, not come across as an economic superpower bestowing charity on its poor southern friend. But even its title Learning From Athens, plastered in posters across the city, feels a little forced—as though they were trying to find the perfect name to get the locals on board. It hasn’t stopped former Greek minister of finance Yanis Varoufakis condemning the whole thing as a case of “crisis tourism’. 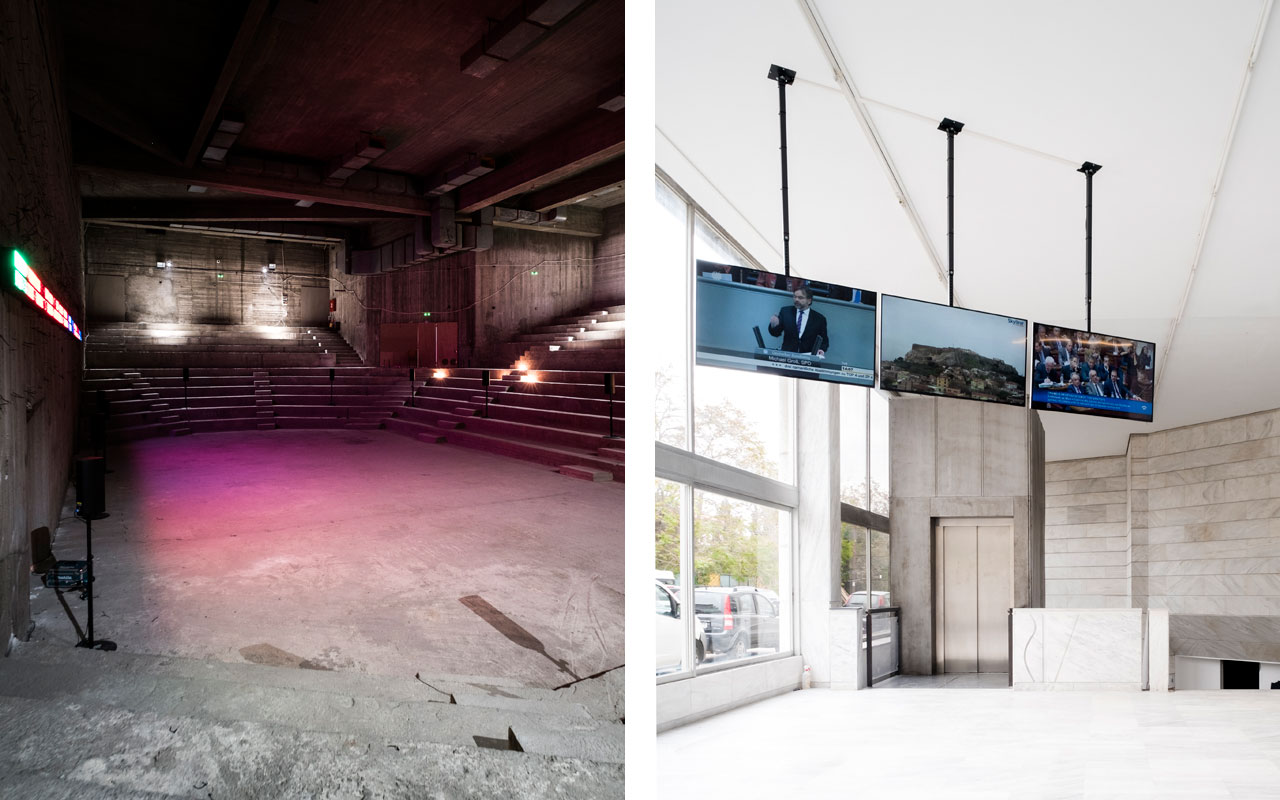 But whatever concerns there are around the location or the organization, this is an extraordinarly complex and challenging exhibition, thought-provoking and compelling, it aims for the highest possible ambition, to reset our political (and artistic) mindset and force us to examine our place within the democratic system.

Despite Szymczyk’s protestations to the contrary, this documenta is framed around Greece, currently drowning under the weight of debt (180% of its GDP) and at the very epicenter of the migrant crisis—the greatest moral catastrophe of our age. The first thing on view at the Athens Conservatoire is David Lamelas’ live feed of ongoing debates in the Greek Parliament and its German equivalent. The two political houses are separated by live footage of the Parthenon—a distant symbol of the western world’s emergence and increasingly fragility. Alongside it, in a pitch black room, Susan Hiller’s The Last Silent Movie features the last speakers of extinct, or near extinct, languages from around the world. Subtitled on a black screen, the work is not just a profound reminder of the many voices we will never get to hear, but becomes a kind of oral archaeology.

The four main art venues Emst, The Athens Conservatoire, ASFA and the Benaki Museum occasionally lapse in intensity, suffering at times from the sheer scale of the exhibition, but something unexpected is always round the corner. Just as you finish watching the gut-wrenching “Glimpse,” a 20-minute silent film of the now destroyed Jungle migrant camp in Calais by Artur Zmijewski at the ASFA, you are suddenly surrounded by the beautiful straw and hay works of Olaf Holzapfel. Entitled Fences, it is not hard to see the political connection, the borders of our collective belonging, real and imaginary, but their sharp physical lines catch you by surprise.

Shortly before the opening of documenta, Szymczyk had been picking at the flaws in democracy, urging people to remember that as political subjects we can no longer simply rely on our “elected representatives.” Yet the radical notions underpinning this statement are bizarrely articulated in the Benaki Museum with the piece Live and Die As Eva Braun by Roee Rosen, which draws the viewer into a lurid virtual reality scenario surrounding Hitler’s last days in the bunker with his young mistress. Each chapter drags you further into this preposterous tale of recalled intimacy that brings up questions of complicity and forces an unpalatable engagement. Further along, Sergio Zevallos’ A War Machine gives a blueprint to political interrelations by mixing the urine of such figures as Beate Zschäpe, Ursula von der Leyen, Mario Draghi, and Erdogan. 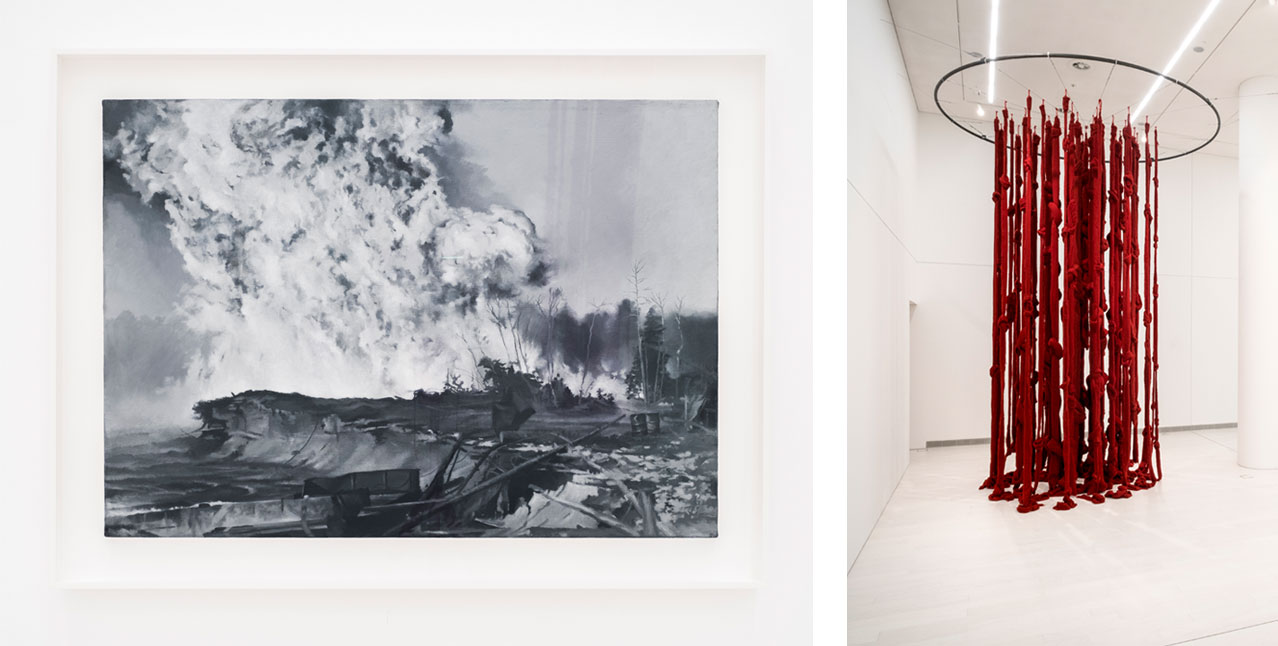 Born out of the horrors of World War II and the Holocaust, documenta has never shied away from confronting the most urgent issues of its time. And Szymczyk’s strident belief that we should “unlearn what we know”, rattles round your head as you walk around the exhibition rooms where the cacophony of work and their linking threads are at times simply bewildering. At Emst, the National Museum of Contemporary Art located in a former beer brewery, the transition from Cecilia Vicuña’s Quipu Womb (The Story of the Red Thread, Athens)—blood red tentacles that meditate on our place in the cosmos, works seamlessly with the meticulously studied nightscapes by Vija Celmins. But how this works with Olu Oguibe’s, Biafra Time Capsule, featuring books and archival objects over the appalling famine in Biafra in the late 1960s is wholly unclear. Anyone looking for clarity, a cohesion from work to work, will be left reeling.

But then this is documenta, the most acclaimed art exhibition in the world, experimental and provocative, this should not be an easy experience. Where it is often at its strongest is with the commissioned works, such as Iraqi artist Hiwa K’s Pre-Image (Blind as the Mother Tongue), which sees the artist wandering through fields and mountains with a mirrored appendage balancing on his nose, recounting the journey he once made from Turkey to Athens when forced to flee his homeland. The angled mirrors give him insight to dangers, to perceptions? We never find out, but the voiceover speaks of the need to remember that “sometimes you need other archaeological tools”.

Spread out over 46 venues across the city, there is a dizzying array of art to view, but deviating from the main venues can sometimes have its risks. There is Maria Eichhorn’s Building as unowned property, a house she has bought in a deprived area of Athens to save it from the perils of gentrification and real estate speculation (anyone who wants to visit the actual house in north Athens should be aware that it is literally a boarded up house). There is also an incongruous smattering of Gauri Gill photographs above the carved stones of the Epigraphic Museum—the work is beautiful, the museum is fascinating, but the connection is a strange one.

Emphatically Szymczyk’s decision to divide documenta 14 into two is the right one. With concerns still raging about how Kassel’s visitor numbers be affected, his decision could not have been easy, requiring the team of curators to relocate to Greece, and requiring all 160 of the artists to make work in both locations. Ultimately, he has chosen artists “acutely aware of and concerned about our situation today”. In the underground echo chambers of the Athens Conservatoire, the bric-a-brac assemblages by Guillermo Galindo on the walls are actually homemade musical instruments found at a refugee housing area in Kassel. Distant strands of music can be heard everywhere, in performances, and makeshift instruments, most remarkably in the discordant howls of Jani Christou’s Epicycle, a recurring episode that can be repeated in any location.

Always, just as you feel weighed down by the heavy subject matter you are spun off on a tangent—no one could be left untouched and unbeguiled by Emeka Ogboh’s merging of a Greek lament with the vast, live feed of the stock exchange in the wonderfully isolated venue of a modernist theatre.

Bodies, moving organic bodies, in video and in physical form are a recurring theme. In an interview with Artforum Szymczyk has spoken about the refugee crisis, the largest mass movement of people since World War II that has seen millions of displaced people arriving on the shores of Europe. They bring “very little with them,” just “their bodies, and these bodies add up to a problem that is dealt with through the power of nation-states, which means more borders and more repression against these ‘illegitimate’ bodies.” It is this failure of action that lies at the core of documenta 14, and really, under the circumstances, is there anything right now in greater need of scrutiny? 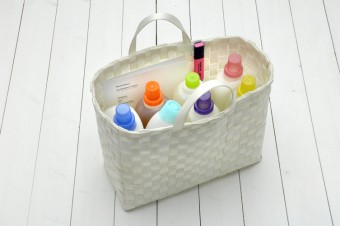 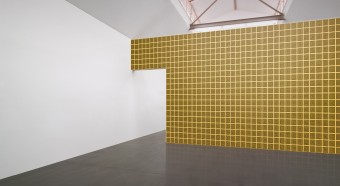